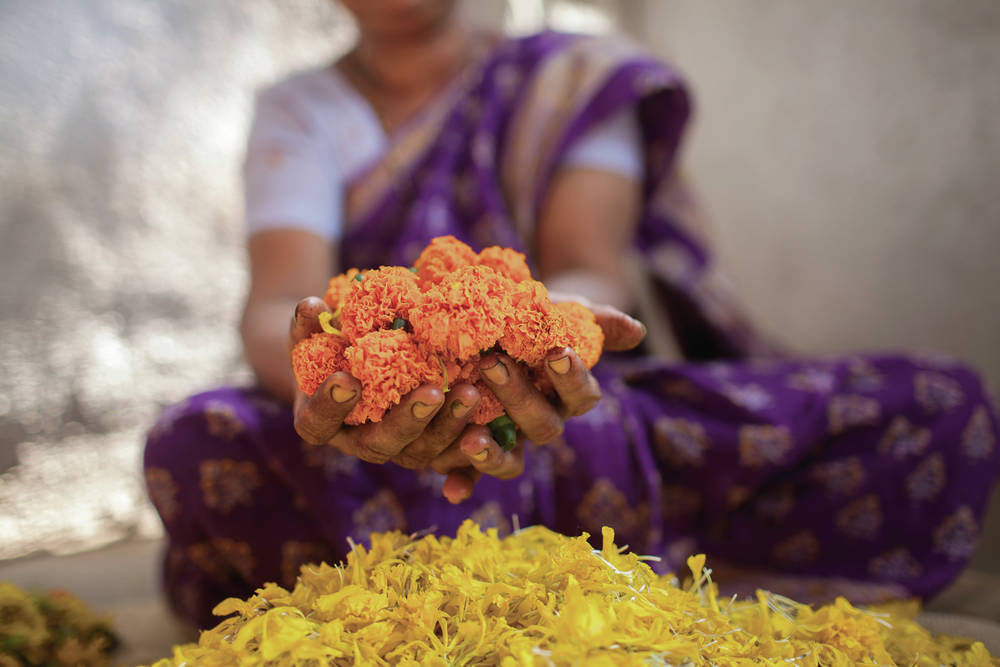 Marigolds from the temple in Mumbai used in the dyeing process. Courtesy Julie Hall 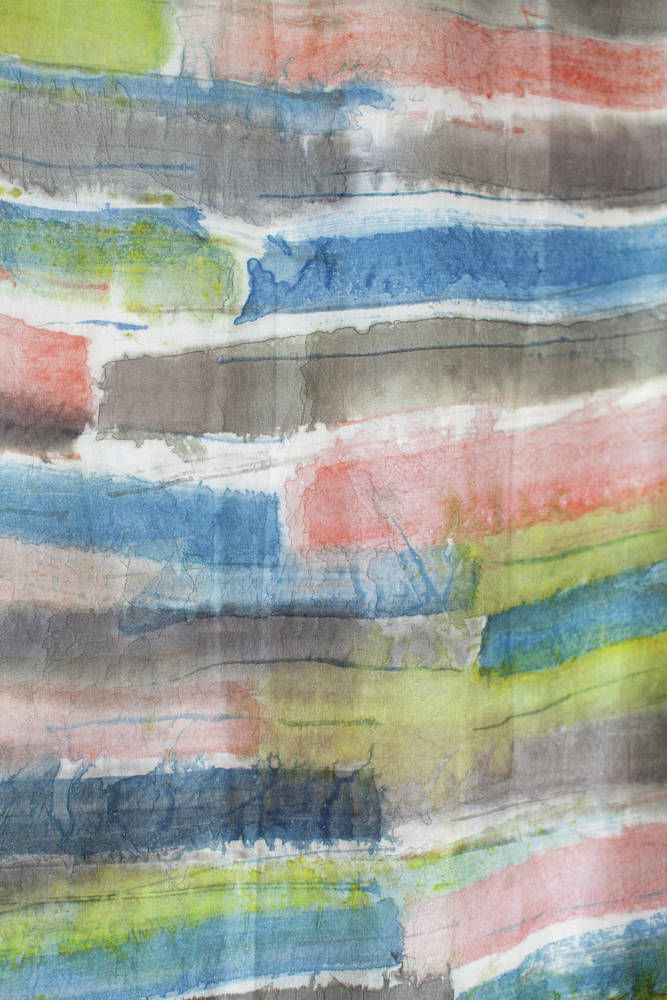 An example of a contemporary textile by Adiv Pure Nature. Courtesy Julie Hall 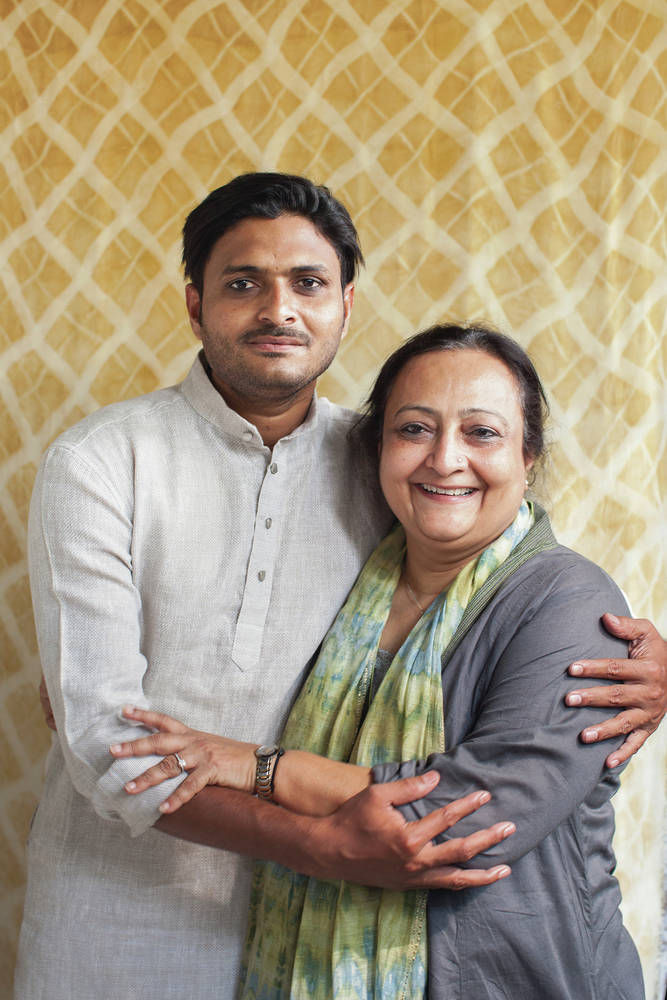 Rupa Trivedi with her husband. She is founder of Adiv Pure Nature. Courtesy Julie Hall 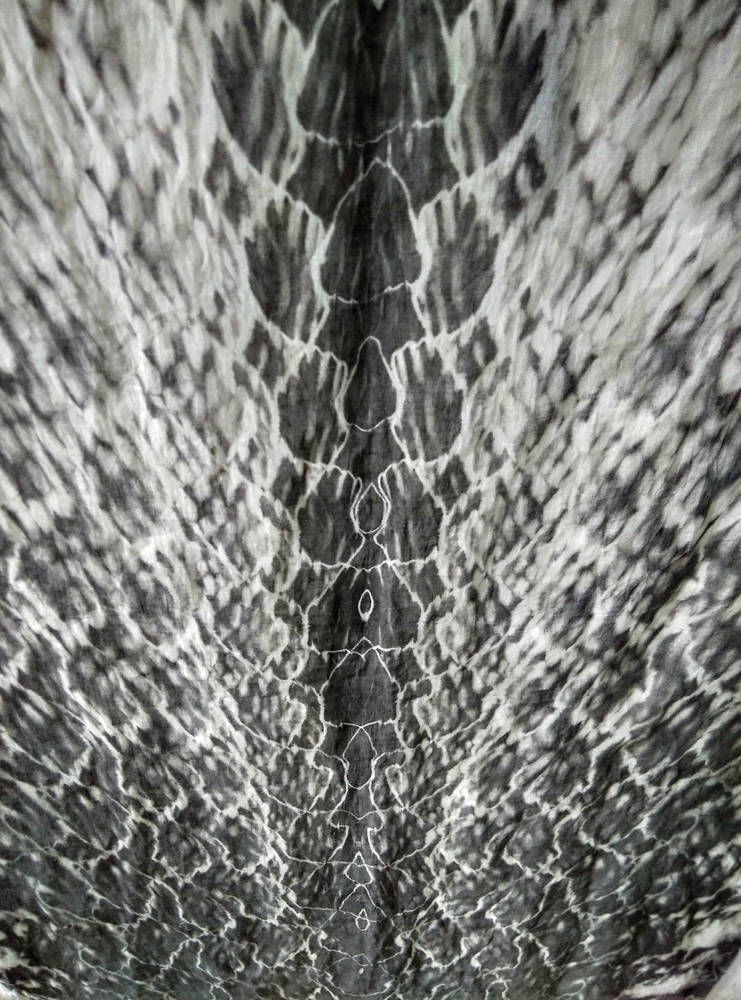 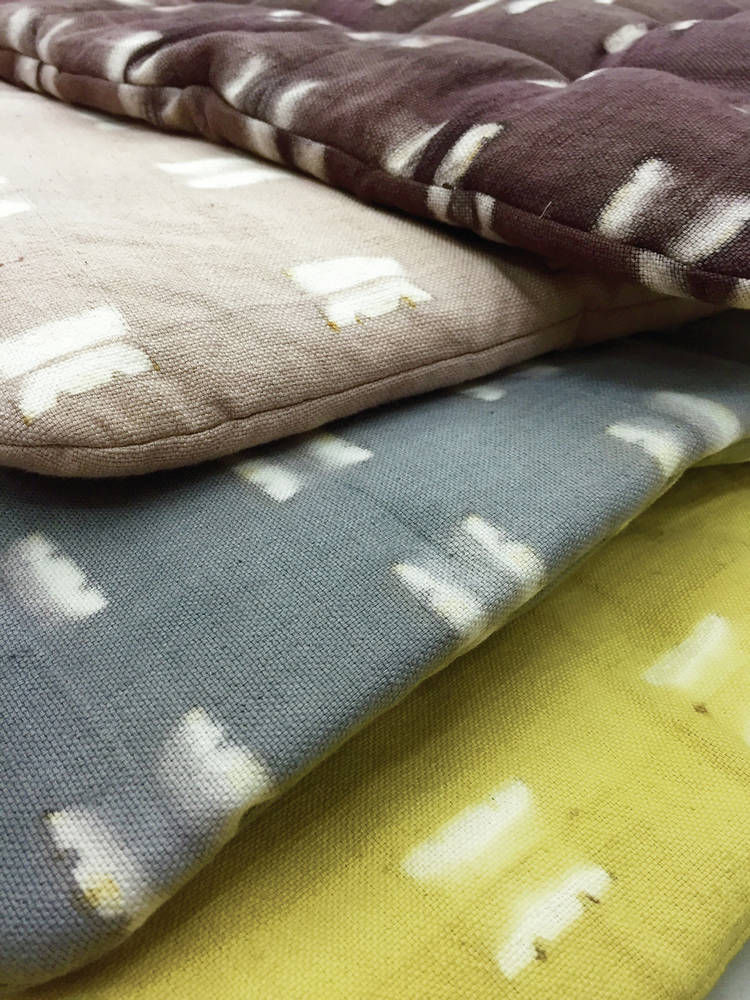 More examples of products made with the nature dyes from temple offerings. Courtesy Julie Hall 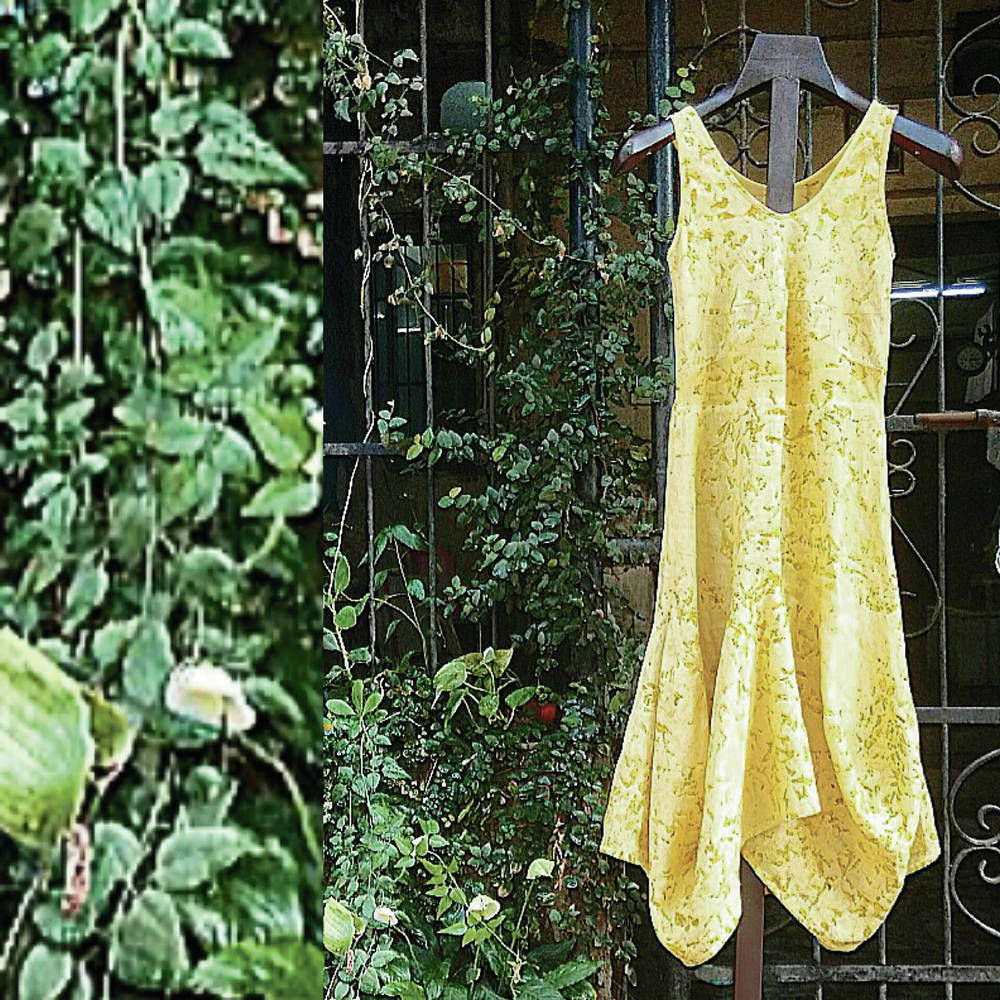 A dress made with temple flowers. Courtesy Julie Hall 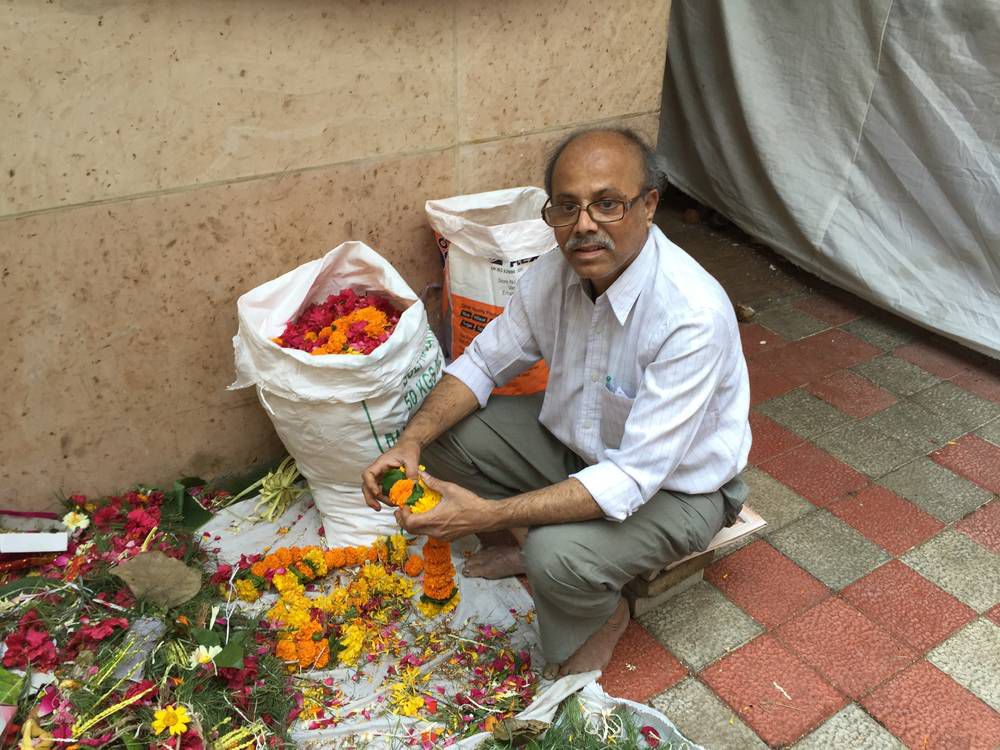 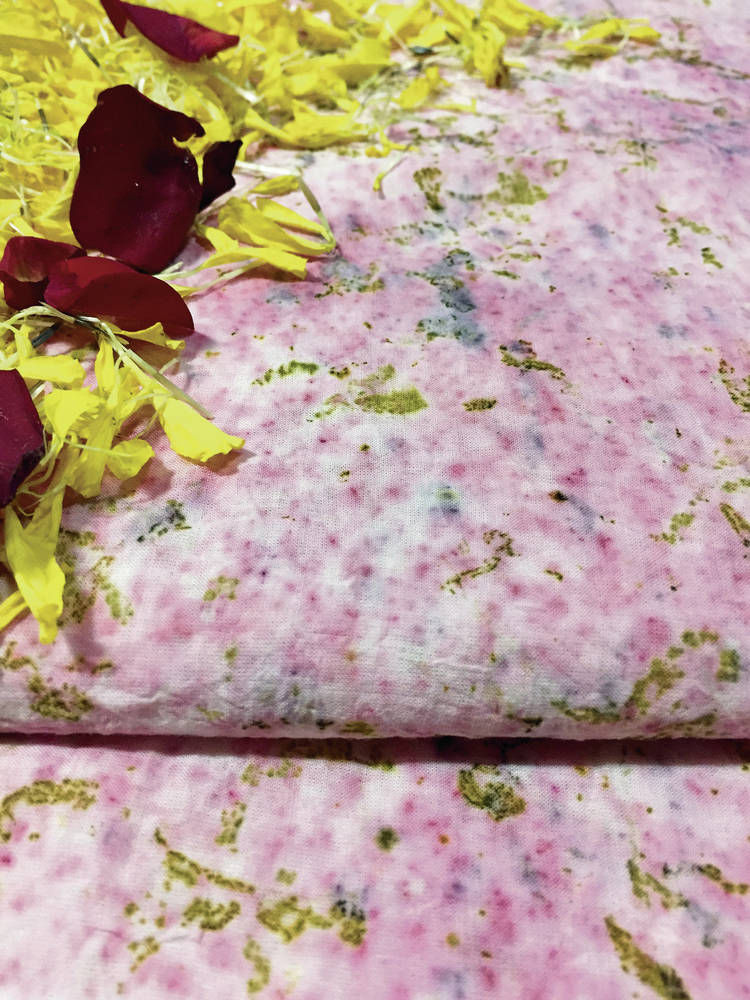 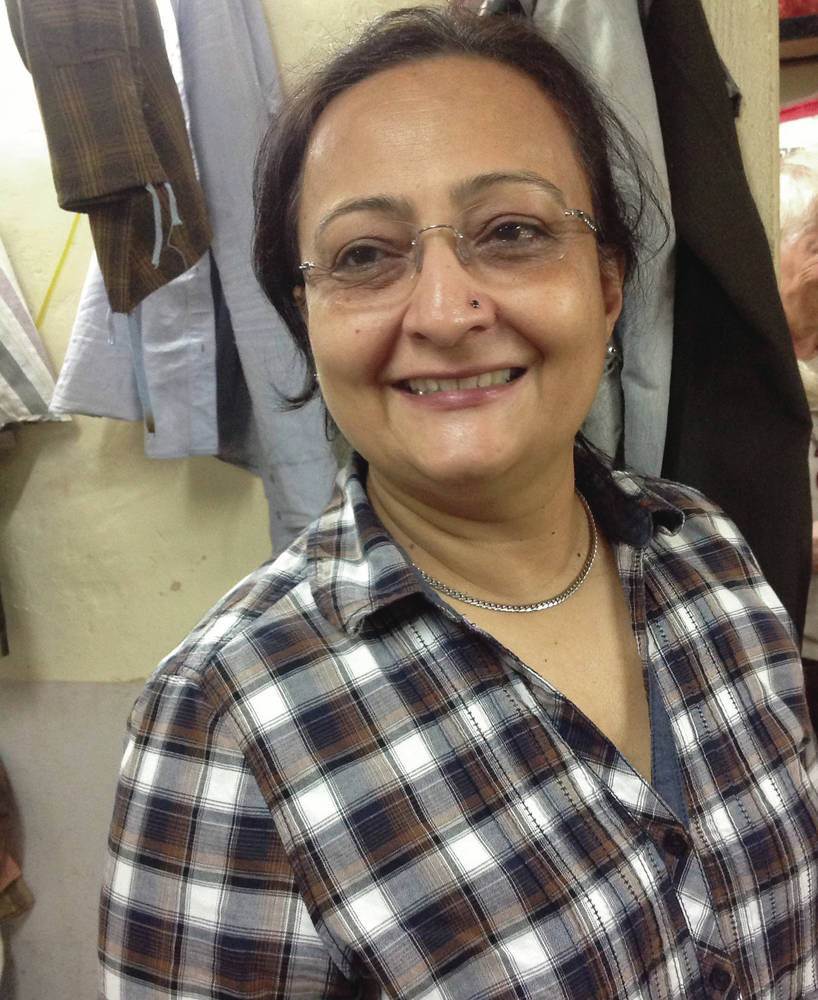 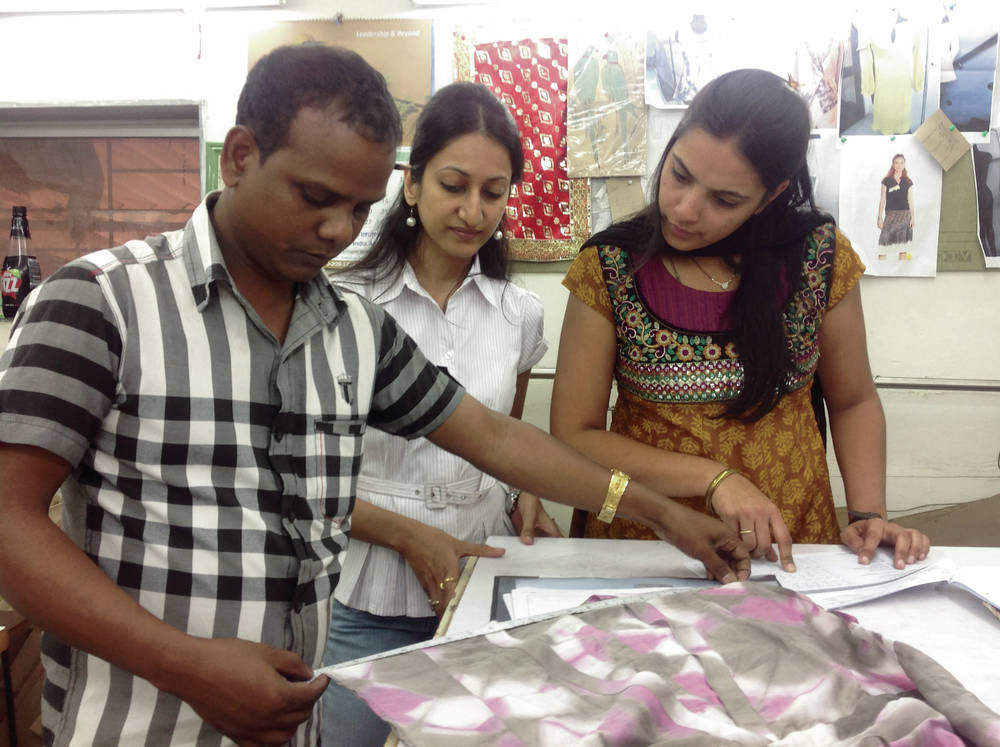 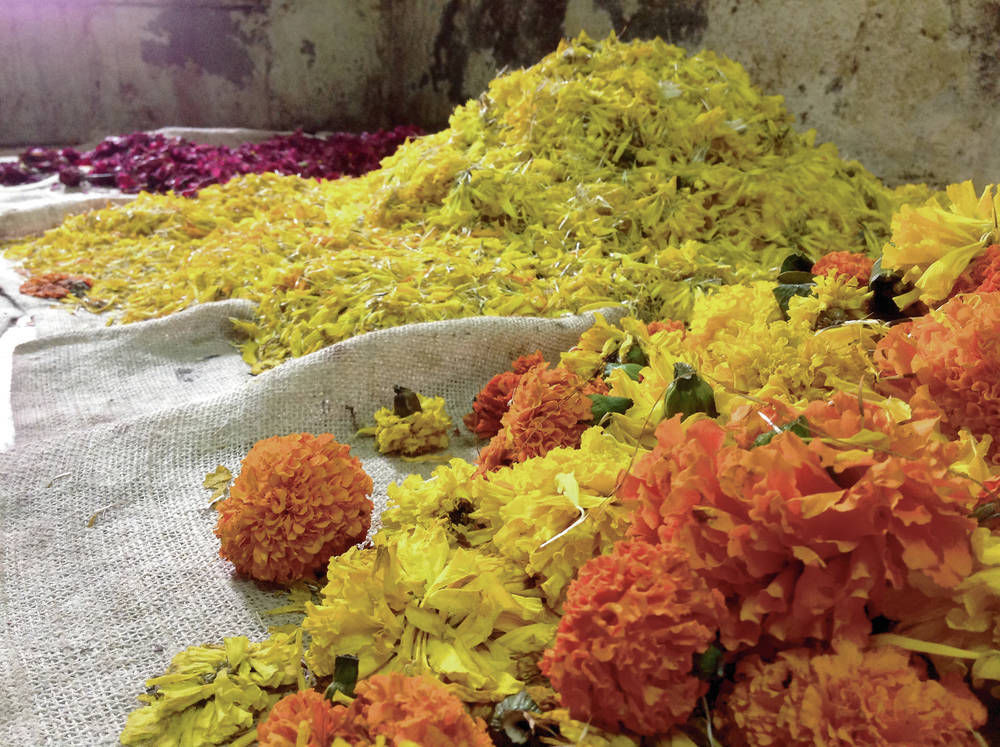 Temple flowers that will be used as part of a dye. Courtesy Julie Hall 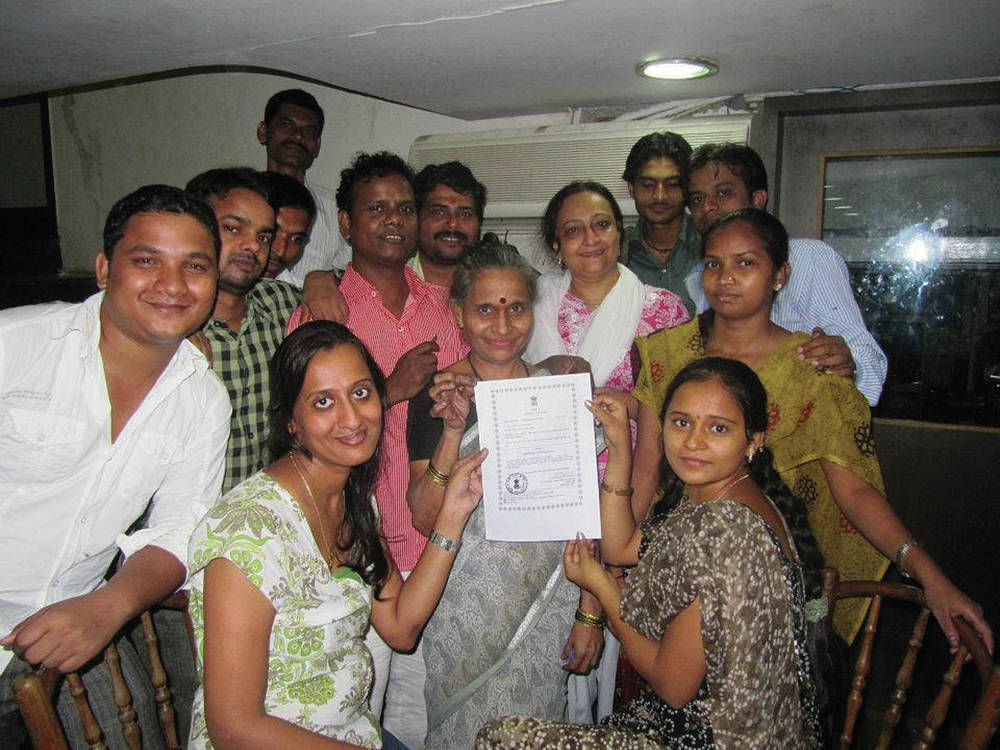 Members of the Adiv Pure Nature team. Their work will be featured at the 14th annual Folk Art Market. Courtesy Julie Hall

Marigolds from the temple in Mumbai used in the dyeing process. Courtesy Julie Hall

An example of a contemporary textile by Adiv Pure Nature. Courtesy Julie Hall

Rupa Trivedi with her husband. She is founder of Adiv Pure Nature. Courtesy Julie Hall

More examples of products made with the nature dyes from temple offerings. Courtesy Julie Hall

A dress made with temple flowers. Courtesy Julie Hall

Temple flowers that will be used as part of a dye. Courtesy Julie Hall

Members of the Adiv Pure Nature team. Their work will be featured at the 14th annual Folk Art Market. Courtesy Julie Hall

Every other day, an Indian man who cannot hear or speak collects nearly 100 pounds of floral offerings from the popular Siddhivinayak Temple in Mumbai. He separates the coconut husks and flowers — yellow and orange marigolds, hibiscus and roses — and delivers the waste to Adiv Pure Nature, a company that uses it to create dyes and materials for steam-textured prints that are made into scarves, dresses and other garments.

Before the company began the Temple Blessings Project, the offerings were dumped into the sea.

Adiv founder Rupa Trivedi, who also owns a high-tech manufacturing firm with her husband, lives close to the beach, she said, and had long noticed the floral waste strewn along the shore. She wanted to do something about it. So, more than a decade ago, she launched the company in a Mumbai slum called East Andheri. The venture gives workers an opportunity to be creative while also addressing the tons of offerings that clog the city’s rivers and streams, and litter its beaches.

About eight young women and several men at Adiv have been trained to dye the natural fibers. The company sells finished products to high-end international designers such as Eileen Fisher and retail partners who want items that are eco-friendly and socially conscious.

“In my small way, I try to contribute,” Trivedi said. “We extract the dye, and what’s left goes to compost.”

Trivedi, one of 30 artists who will show their work in a new exhibit area at the upcoming International Folk Art Market/Santa Fe called Innovation Inspiration, is an example of how the Santa Fe International Folk Art Alliance is taking folk art into the future, encouraging it to evolve and change — and maintaining its emphasis on sustainability.

The work in this new space will be cutting-edge but rooted in tradition. Booths there will be selling everything from felted sari scarves to stylish ponchos, high-fashion knitted coats, Zulu telephone wire plates and hooked rugs made in Guatemala from recycled clothing.

Bringing people together on Museum Hill from around the globe for the 14th annual Folk Art Market, July 14-16, seems particularly significant this year, the market’s founders say, as the world seems to become increasingly topsy-turvy.

“This is a triumphant celebration of what’s right with the world,” said Judy Espinar, one of the founders.

The market, which boasts more than $25 million in artist earnings since it began, is more popular than ever with artisans around the globe. This year, it drew a record 740 applications, though only about 150 were chosen, fewer than in 2016. Organizers expanded the event last year, but the effort led to some booths being set up in an area off Museum Hill’s Milner Plaza that many artists felt was disadvantageous. The expansion won’t be repeated this year.

In another effort to enhance the shopping experience, the market is piloting a $125 concierge service that includes collecting all of a buyer’s purchases from various artist booths to make checking out easier.

And the quality of the art this year is higher than ever, Espinar said. About two-thirds of the participants are returning artists, and the others are new to the show. The folk art alliance, which presents the summer event, is always scouting for fresh work to include.

This will be Adiv Pure Nature’s first year on Museum Hill.

Adele Mattern, a textile and fashion designer who moved from corporate brands to artisan and women’s economic projects, connected with Trivedi about seven years ago and works with her on product development. She recommended Adiv for the Folk Art Market and prepared the company’s application. Adiv was selected for the Innovation Inspiration initiative.

There have always been artists at the market who push the boundaries of traditional folk art. But the new initiative, funded by longtime Santa Fe folk art supporters JoAnn and Bob Balzer, officially opens the market to artists whose work is rooted in tradition but more contemporary in process or style.

As with the rest of the market, applicants for booths in the innovation area had to navigate a rigorous acceptance process. A team of curators first screens all the work for quality and authenticity, and then a placement group ensures a diversity of items across the market — and a good shopping experience.

Espinar said market organizers asked the artists to explain why their work should be included in the new initiative — what makes it innovative. “Instead of us defining what it looked like,” she said, “we’re going with their definition. … The artists will teach us what innovation is.”

The result is new art forms, aesthetics and uses of artistic styles. For example, the scale of a traditional design might be changed, making it larger and more open instead of tight and intricate — a technique used in the textiles of Sufyian Ismail Khatri from India. Ramiro Moreno of Colombia’s wooden stools grew out of the indigenous Sikuani tradition of carving ritual weapons or sculptures and using them to retell stories of ancestors. His pieces are shaped like anteaters, armadillos and turtles.

Mattern said, she thinks Adiv appealed to the market because of the repurposing of the offerings and the new uses of eco-friendly natural dyes. While natural dying is the oldest form of coloring, the company’s “output is fresh and relevant now and contemporary,” she said. And, she added, “It is interesting that [it] was able to do this in a very urban setting with artisans who don’t really have too many ways to connect with nature.”

The new innovation initiative is also encouraging collaborations. For instance, one booth will show silk scarves from India in which one artist — Abdulaziz Alimamad Khatri — did the very modern-looking clamp dying of the fabric while another — Asif Shaikh — embroidered the scarves with silk thread and stones and added embroidery cutouts.

Market favorite Aboubakar Fofana also will be in the Innovation Inspiration section with his most contemporary indigo products. Fontana was a calligrapher and graphic designer working in Paris who returned to Mali to study indigo dying.

Carla Fernández, a Mexican fashion designer, will bring to the market geometrically shaped tunics and dresses trimmed in shawl fabrics. With her partner artisanal groups, Fernandez is reinterpreting traditional garment shapes and materials.

“The garments that we create prove that tradition need not be static, nor fashion ephemeral,” she said in a statement. “We only simplify the garments to be worn by a more urban customer.”

And, she added, through “radical design, we can prevent Mexican handicrafts from fading away.”

Community celebration: 6 to 8:45 p.m. Thursday, July 13, on the downtown Santa Fe Plaza; free concert with Cuban band TradiSon and an artist procession; free and open to the public. Special giant dragons made in collaboration with Meow Wolf’s student art program will lead the artist procession.

Bike valet: A bike valet is available beginning Saturday at 7:30 a.m. and Sunday at 9 a.m. Bike riders must enter Camino Lejo from Camino Corrales. The service will be located on the right side of the road about 20 yards before the market entrance. Donations will be accepted.