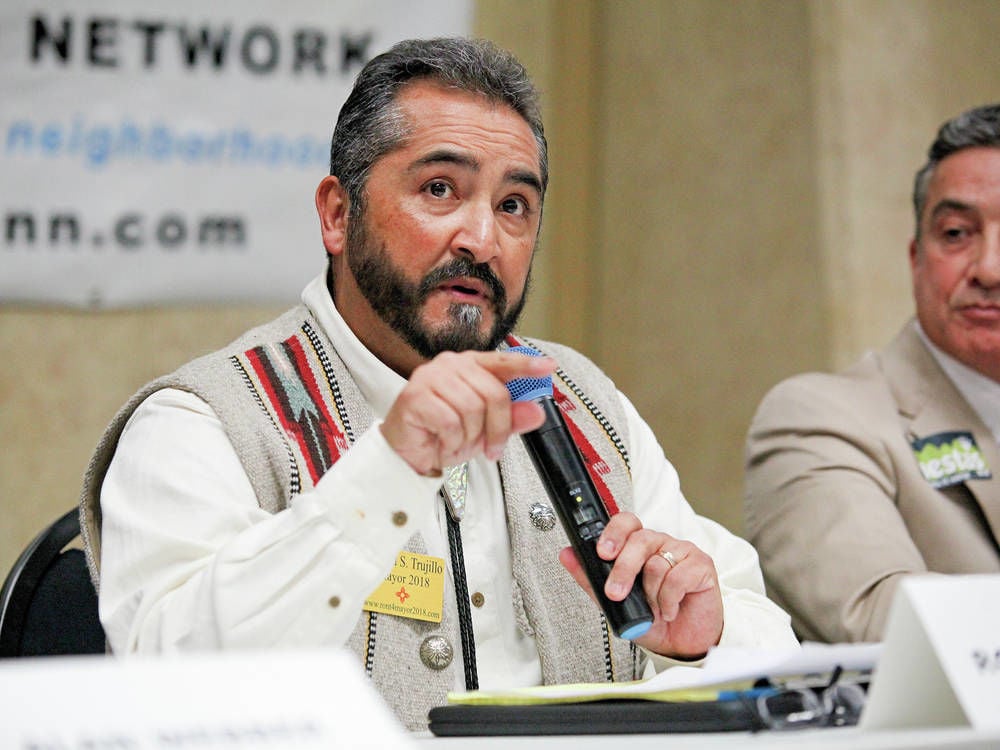 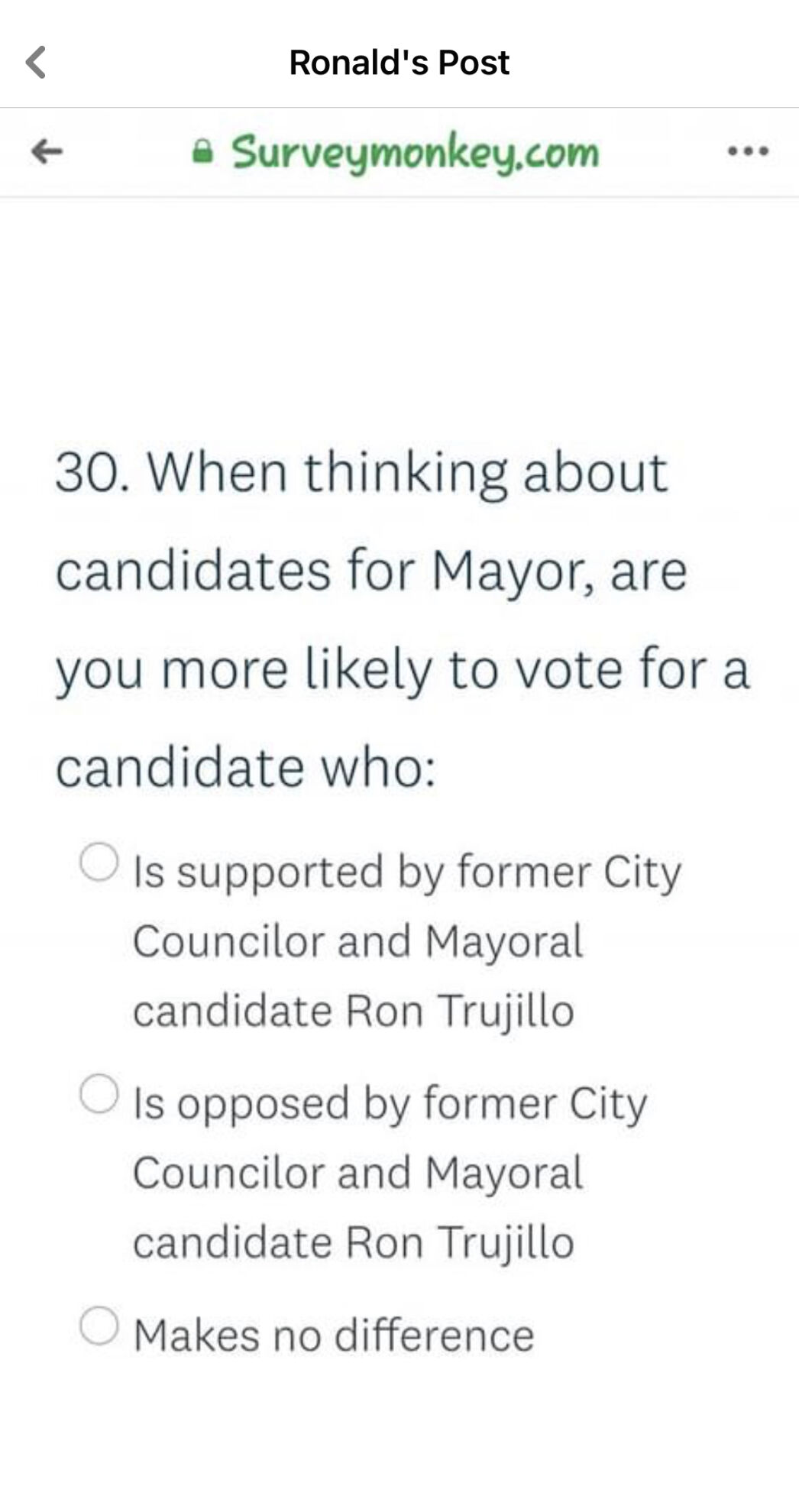 An election survey circulating around the internet this week appeared to pit Santa Fe Mayor Alan Webber against his biggest opponent in the 2018 mayoral race.

The name of the former city councilor, who came in second to Webber in Santa Fe's first ranked-choice mayoral election, appeared four times in the 40-question survey, which was hosted by SurveyMonkey until it was pulled down sometime Wednesday.

It was unclear whether Webber's campaign was behind the poll.

It asked potential voters several questions related to the November election. Among them were questions asking whether the survey participant would be more likely to vote for a candidate who was supported by Trujillo or one who was opposed by him.

"I'm not running for mayor but it seems that the Webber campaign feels the need to ask questions that make me out to be a BAD GUY if you vote for someone I support," Trujillo wrote in a Facebook post Wednesday in response to the survey.

Sascha Guinn Anderson, a spokeswoman for Webber's campaign, declined to comment Wednesday on the survey, noting the campaign does not comment on research "as a matter of policy."

She neither confirmed nor denied whether the survey was authored by the campaign.

Later that day, the survey was pulled down.

SurveyMonkey responded to an email stating that the company does not release survey author information.

Trujillo, who previously said he was supporting and endorsing mayoral candidate and current City Councilor JoAnne Vigil Coppler — Webber's only rival in the race so far — called the survey "funny" and "divisive" during an interview Wednesday.

Since the election, Trujillo has been a vocal critic of Webber's administration and has chastised the mayor's handling of the controversy surrounding public monuments and statues in the city.

His Facebook post also included criticism: "Santa Fe you've seen first hand how bad our city has become under Alan Webber and his Administration. Another 4 years of this type [of] so called leadership and Santa Fe is DOOMED," he wrote.

Brian Sanderoff, president of Albuquerque-based Research and Polling Inc., said it is not unusual for campaigns to gauge the impact of an influential person's endorsement through a survey.

He would be more concerned, he said, if an entire survey were centered on one individual.

JoAnne Vigil Coppler has a FB page, go there to make donations.

Other than not liking Webber, I wonder why you are supporting Vigil-coppler, Maria. Have you looked at her record for supporting development rather than neighborhoods? Have you seen her speak out about water issues? Just asking. I know if you vote, it is one or the other. That is why I wish a viable third person would run for mayor.

Of course Webber's campaign is behind the survey. If they weren't, his campaign would've denied it immediately and vehemently. What a cheapskate. All that money and he uses SurveyMonkey to do market research - non-scientific and biased. The fact that he continues to focus on Trujillo gives me the feeling like he doesn't like locals much - he's looking for a way to appeal to his demographic while denigrating locals. Our land is good, our culture is good, but we the people, not so much. Dude is slippery - and that is generous.

Went to school together since Jr. High and he has never forgotten his roots.

Very questionable how a current survey could include anything about Ron Trujillo when clearly he has not announced he's running for mayor - but, then again, isn't everything about Webber very questionable?? Santa Fe cannot take another 4 years of his so called leadership.

Also, to the reporter, "SurveyMonkey responded to an email stating that the company does not release survey author information." Did you bother to ask Brian Sanderoff at Research & Polling Inc the same question?

This survey not only came through survey monkey, looking at the two screenshots of questions, this is the exact same survey that was text to me by "Juan" at NM Research. I could tell 10-15 questions in, it had to be from the Webber campaign by the framing , as you can do with most political polls. It asked questions like would I be more likely to vote for Webber after knowing......and then listed things like he made masks mandatory, he's for affordable housing, supports living wage, and then a question about probability about voting for Joanna, knowing she's against a living wage, affordable housing since she's a realtor. I knew for sure Webber was behind it when it brought up Ron. My concern is, since i"ve emailed the Webber, and possibly included my cell number that he has provided those contacts from his Mayoral communications to his campaign?

he wears it on his face - nervous cheat...

Another example of Webber’s lack of transparency. If you contracted for the survey, just acknowledge it.

Webber should be worried.... Very WORRIED.

I love the smell of desperation in the morning.

Should Ron Trujillo run for Mayor, let us hope he puts more effort in the job than he did while employed at NMDOT.. Otherwise, in his words, "Santa Fe will be doomed!"

Ms. Baca, I know absolutely nothing about Mr. Trujillo - other than the fact that he's apparently a front-runner in a race that he's not even entered into. Talk about voter recognition!

[thumbup][thumbup][thumbup] and less divisiveness than he displayed as a city councilor. And as for Ms Vigil-Coppler, I can see that she is frustrated about not getting a report on midtown before the council meeting but instead of waiting until the meeting, why isn't she requesting it from Rich Brown the day she receives the packet. And then complain if she does not get it. Also she complained without any indication of why about Webber's poor treatment of Yolanda Vigil but last night I saw her treat the woman who heads the historic preservation division in a dismissive way, discounting evidence that this female professional was presenting under oath so V-C could "justify" her pro development (let's be pretentious) vote for an 8.5 ft high, massive arched, locked gate. Surprisingly Webber's voted against this addition to a contributing wall in front of one of Will Shuster's homes on Cam del Monte Sol keeping it simple and humble-and not giving in to the cry for security which can be achieved in many ways besides a high wall and locked gate.