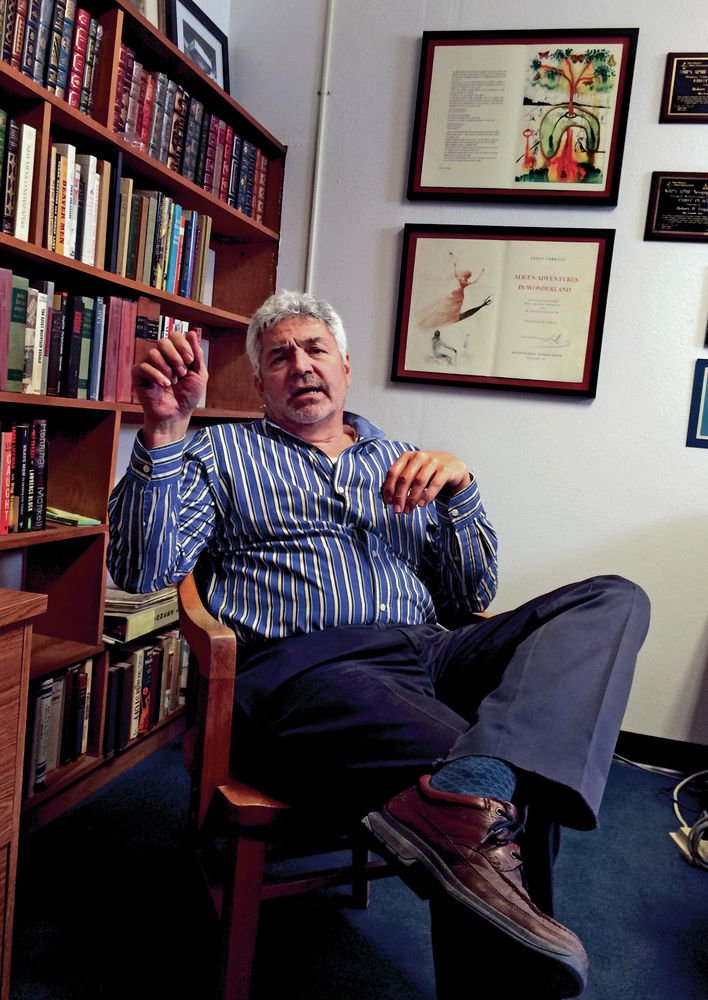 Managing Editor Robert B. Trapp talks Monday about the arson attempt at the newspaper’s office on Saturday. ‘There’s a lot of people mad at us for a lot of stuff and for a long time,’ he said. Robert Nott/The New Mexican 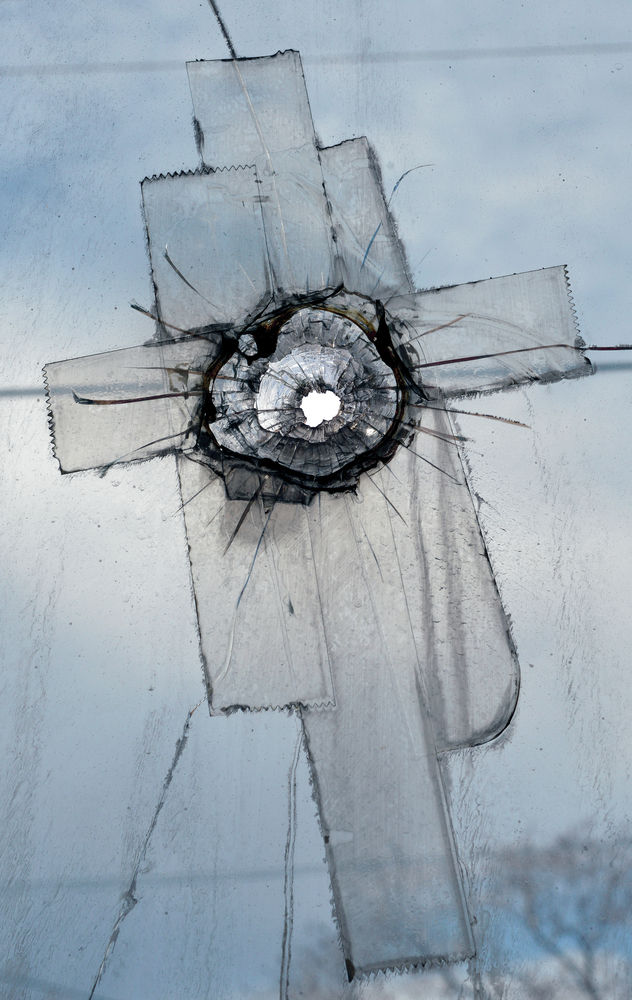 Several years ago, someone used a high-powered rifle to shoot through a window of the Rio Grande Sun’s office in Española, New Mexico. Clyde Mueller/The New Mexican 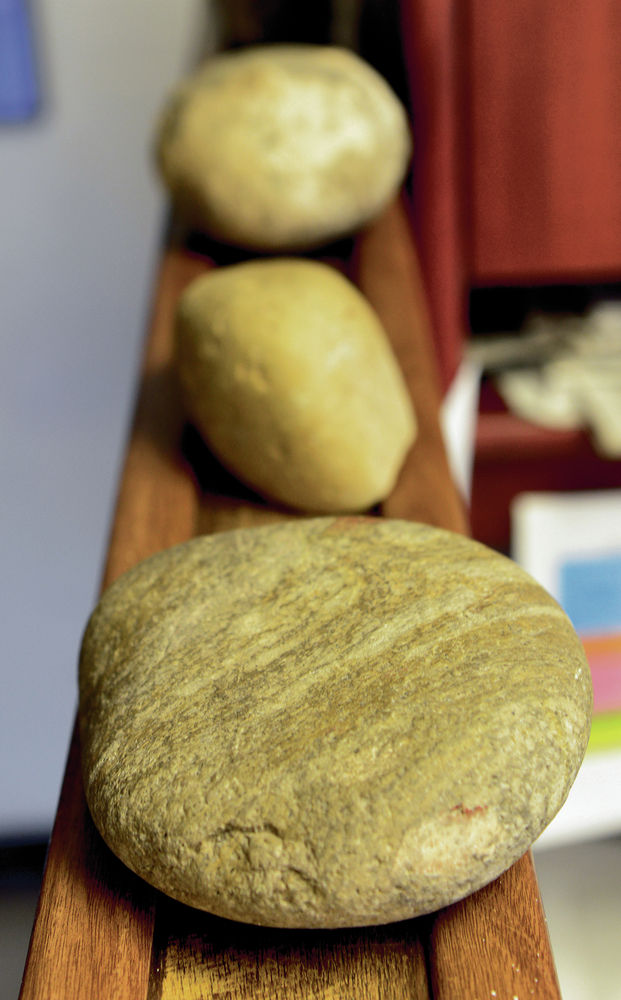 Some of the large rocks that have been thrown through the windows of the Rio Grande Sun’s office in Española, are on display in the newspaper’s employee area. Clyde Mueller/The New Mexican

Maria Garcia, general manger of the Rio Grande Sun in Española, surveys the fire damage in a room at the newspaper on Monday. Clyde Mueller/The New Mexican

Managing Editor Robert B. Trapp talks Monday about the arson attempt at the newspaper’s office on Saturday. ‘There’s a lot of people mad at us for a lot of stuff and for a long time,’ he said. Robert Nott/The New Mexican

Several years ago, someone used a high-powered rifle to shoot through a window of the Rio Grande Sun’s office in Española, New Mexico. Clyde Mueller/The New Mexican

Some of the large rocks that have been thrown through the windows of the Rio Grande Sun’s office in Española, are on display in the newspaper’s employee area. Clyde Mueller/The New Mexican

In the process, the independent weekly newspaper has made its fair share of enemies. Employees have found the tires on their vehicles slashed. Rocks and bullets have penetrated office windows. Threats have been made against the paper’s owner and staffers.

Early Saturday morning, someone went a step further and set fire to a front office. The flames, likely fueled by gasoline, burned some furniture before they self-extinguished within a few minutes.

It was the first arson attempt against the Sun, renowned for its hard-hitting reporting on the people and politics of the Rio Grande Valley to Santa Fe’s north.

To Rio Grande Sun managing editor and owner Robert B. Trapp, the brief conflagration was “nothing. There was a fire. I gotta clean up, get a new copier. We gotta move forward.”

He and his staff have become inured to criticism and threats, he said. “There’s a lot of people mad at us for a lot of stuff and for a long time,” he said Monday during an interview in his office in the newspaper, located in an old post office building on Railroad Avenue.

Trapp doesn’t know whether the act was tied to a particular story or subject. And if it was, he said, “The suspect list is long.”

Since its founding in 1956 by Robert Trapp Sr. and his wife Ruth, the Rio Grande Sun has published stories on embezzlement of school funds, heroin addiction and trafficking, and wayward public figures — including former Rio Arriba County Sheriff Tommy Rodella, who recently was sentenced to 10 years in a federal prison for violating a man’s civil rights while brandishing a handgun during an out-of-uniform traffic stop.

“When the police asked me, ‘Any idea who would be mad at you?’ I said, ‘Start with our half of our county building, half of City Hall,” Trapp said. “We can go with the school board, too.”

Inside the Sun’s office is long shelf featuring a display of rocks — about 15 in all — that the Trapps and employees have collected from the floor of the newspaper building. All of them were found surrounded by shattered glass after the rocks were thrown through windows.

Two bullet holes — one from a high-powered rifle and one from a smaller caliber gun, maybe a .22 — are still visible in some windows.

Once Trapp installed video cameras, he said, “It stopped everything — all the tagging and vandalism.”

But it’s possible that Saturday’s culprit did not see the surveillance cameras. Trapp said a video camera once caught a man trying to break the window of Trapp’s office by throwing five rocks at it. As the man picked up the last rock, he finally caught sight of a camera and took off, Trapp said.

Trapp said initial police reports stating that the cameras were not working Saturday are untrue. He said surveillance footage shows a man breaking the window, pouring some kind of fuel inside the office and lighting a match.

Trapp declined to say what else is on that video, but he said he believes it is enough to catch the suspect.

Rio Arriba County residents seem to either love or hate the Sun.

But like it or not, faithful readers grab a copy after it publishes each Thursday. The paper sells more than 10,000 copies a week, Trapp said.

Fidel Gutierrez, who owns and runs Angelina’s Restaurant, is a fan. He said he reads the Sun every week.

“I think it’s beautiful,” he said. “Some people don’t like it because they write the truth. These people who get into the paper are usually people who have done something wrong.”

One of Gutierrez’s customers, a man in his 60s who said he didn’t want his name published, echoed those sentiments.

“Mr. Trapp can only report what happens here,” he said. “And nothing good ever happens here.”

Others are more critical. A woman who works at an Española convenience, who also did not want her name published, said she doesn’t like the Sun because if you commit a crime the publication will “dig into your childhood, right down to how many diapers you used as a baby.”

Still, she acknowledged that she reads it and said it sells out fast at the store.

A few readers take the middle ground, seeing both the positive and negative in the paper’s catchy headlines and extensive stories. Daniel Arellano, a minister at the Christian Rock Fellowship in Española, said the paper has a great sports section and sometimes publicizes “hopeful news” — such as church food drives — within its folds.

But those are rarely front-page stories, he said.

“It seems most every cover story is about what takes place behind the scenes of different offices,” he said. “But still, I don’t know why anybody would try to burn them down.”

Efforts to silence a newspaper’s voice by violent means are hardly new. In early January, terrorists killed 12 people in an attack on the Paris office of the satirical newspaper Charlie Hebdo.

Last month, someone tried to light seven small fires in the back shop of the Deming Headlight in Southern New Mexico. The Deming police are still investigating that case.

Trapp estimates the arsonist caused $3,000 to $4,000 worth of damage, including the cost to repair the newspaper’s front door, which firefighters had to break down to get inside Saturday.

“A note to readers: Go down to the fire department and give them a key to your door,” Trapp said.

Carlos Padilla, public information officer for the State Fire Marshal’s Office, said the agency is working with the Española Police Department on investigating the crime. He did not have information on what evidence has been gathered.

Conact Robert Nott at 986-3021 or rnott@sfnewmexican.com.

Freedom of speech is protected by the U.S. constitution, gladly. On the the hand, I find Rio Grande Sun's type of reporting common among small-town newspapers like Las Vegas Daily Optic, for example. Though quite truthful, the reporting borders on sensationalism, sometimes insensitive to local residents. Maybe even yellow journalism in some ways. I recall a recent example in the Las Vegas Daily Optic that made headlines. The newspaper front-page headline read something like, "And you thought your kid was bad." The story, rather uneventful, was about a teen who vandalized a local school. But the story provided lots of names, explicit details, etc., making it sensational.

Larger newspapers avoid such nonsensical headlines. So I see both sides of the situation. I give Mr. Trapp credit for sustaining, despite who gets angered in the process. But being a tiny more sensitive to your neighbors and patrons from time to time, would not hurt.

Has anyone ever gotten angry at the New Mexican for its fearful reporting?