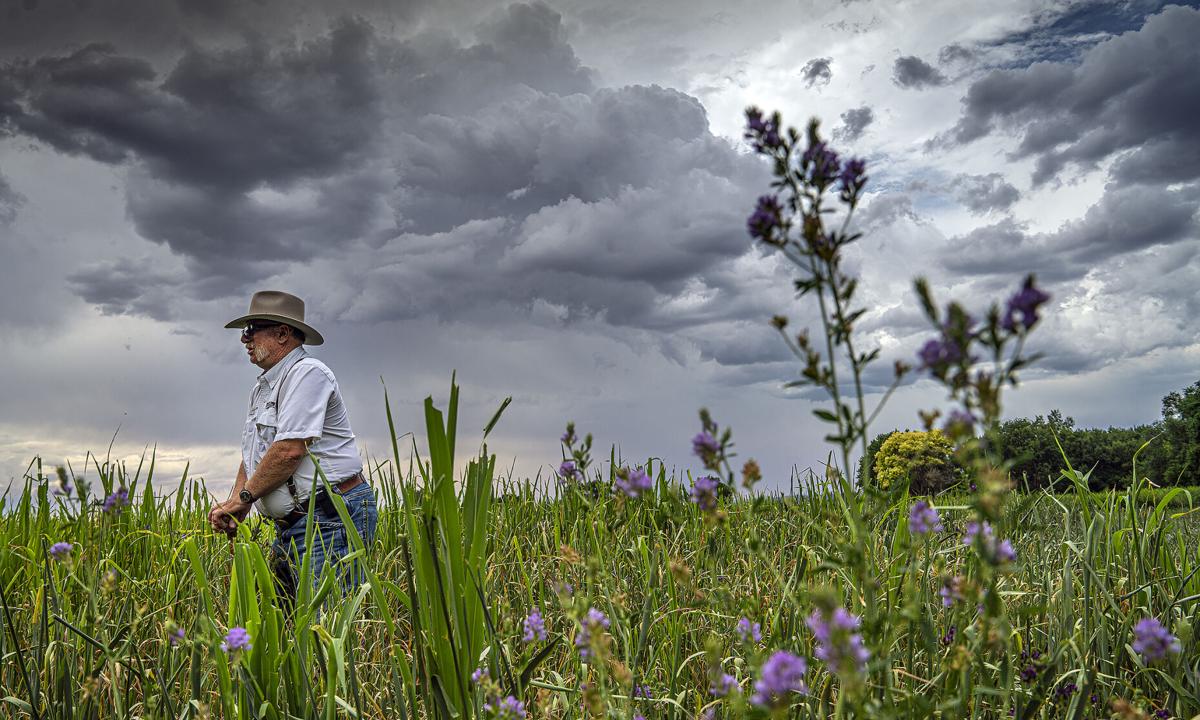 Paul Skrak, owner of the 55-acre Hidalgo Farms near Peña Blanca, stands in a field of Sudan grass Friday afternoon as storm clouds roll in. A portion of Skrak’s field was destroyed in recent weeks, after rainwater pooled and killed the grass. 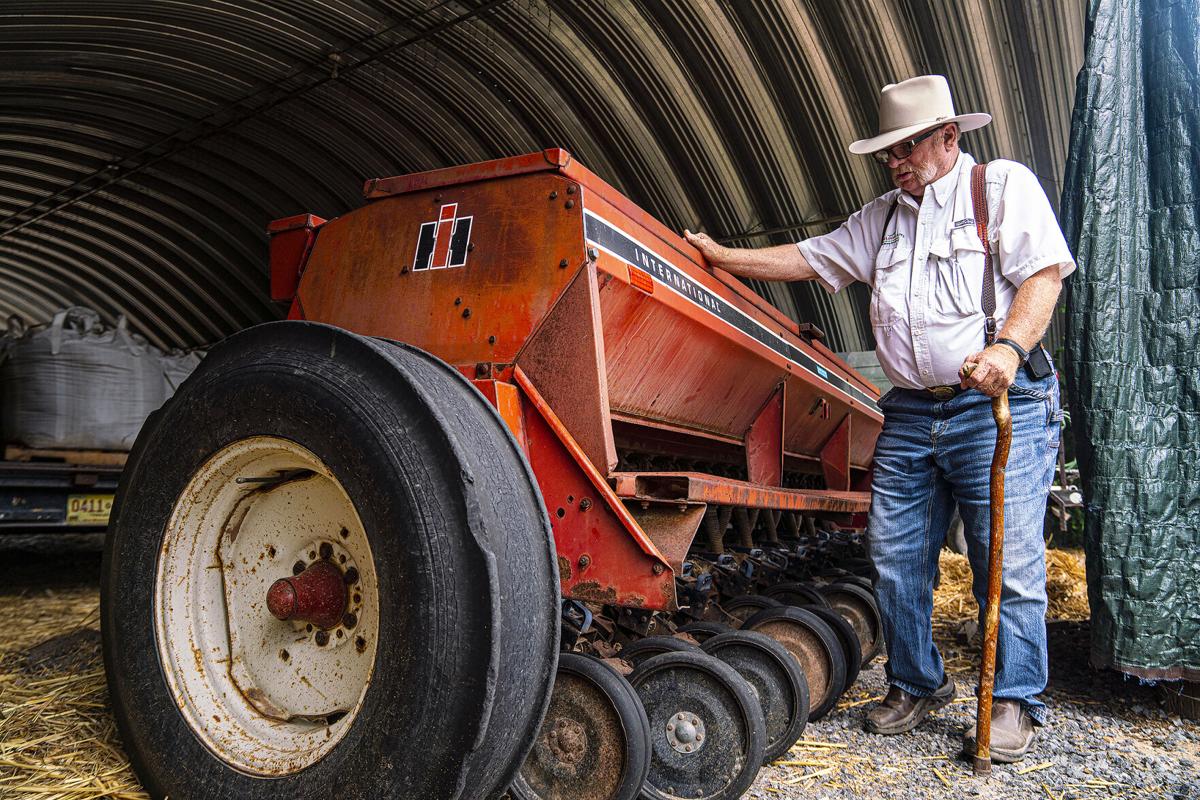 Paul Skrak, owner of the 55-acre Hidalgo Farms near Peña Blanca, stands beside an air drill he is unable to use for seeding and fertilizing due to the wet fields. 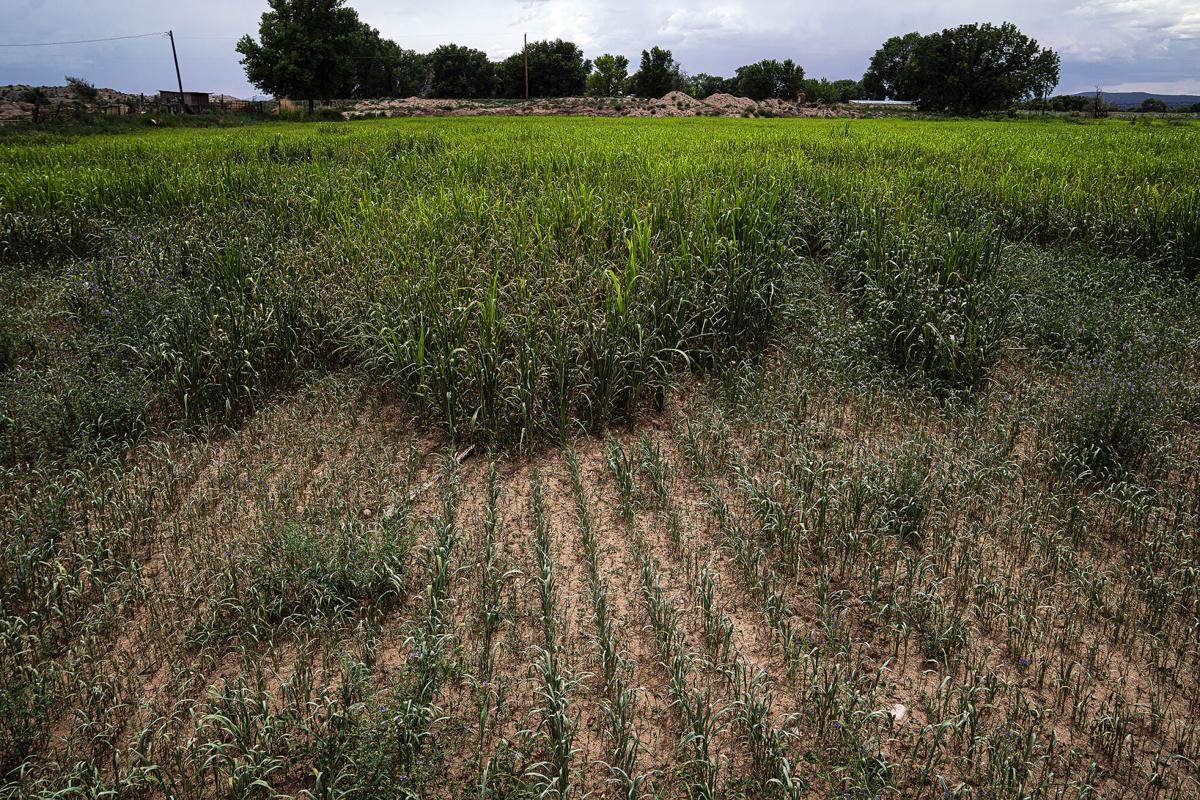 A portion of Paul Skrak’s Sudan grass field, where rainwater pooled and killed the plants, on his farm near Peña Blanca.

Paul Skrak, owner of the 55-acre Hidalgo Farms near Peña Blanca, stands in a field of Sudan grass Friday afternoon as storm clouds roll in. A portion of Skrak’s field was destroyed in recent weeks, after rainwater pooled and killed the grass.

Paul Skrak, owner of the 55-acre Hidalgo Farms near Peña Blanca, stands beside an air drill he is unable to use for seeding and fertilizing due to the wet fields.

A portion of Paul Skrak’s Sudan grass field, where rainwater pooled and killed the plants, on his farm near Peña Blanca.

Four months ago, Paul Skrak was among the New Mexico farmers who braced themselves for a bleak summer when acute drought conditions delayed the growing season by 30 days.

But the past few weeks have brought rainfall that’s defying earlier doubts of a strong monsoon, which has eluded the region for several years.

Water managers welcome the downpours, saying they are boosting river flows and offering a much-needed break, however brief, in the state’s stubborn drought.

For farmers, this abrupt reversal of meteorological fortune has generated too much rain, too fast, creating a different set of problems.

“It has damaged the chile, and damages the grass hay, and just plain kills the alfalfa,” said Skrak, owner of the 55-acre Hidalgo Farms near Peña Blanca.

Skrak said the rains have made the fields so muddy that he can’t drive a tractor onto them to harvest the grass hay and alfalfa.

“That’s the problem we’re having right now: The habañeros are not growing very well,” he said.

Skrak expects he will have only two cuts — or batches — of hay and alfalfa this season, less than the three he cultivates in a normal season.

While the spate of rainstorms is resulting in less profitable yields for growers, they are making somewhat of a dent in the water shortage — or at least preventing it from getting worse, officials say.

“The rain that we did get in the river from all the various storms has helped tremendously,” said Mike Hamman, CEO and chief engineer for the Middle Rio Grande Conservancy District.

The district has not had to tap the 12,000 acre-feet of irrigation water it recently received from the U.S. Bureau of Reclamation, Hamman said, adding the water is now stored in the Abiquiú Reservoir and will be released when needed.

An acre-foot is about 326,000 gallons, enough to supply an average U.S. household for a year.

Farmers are getting by with less surface water for irrigation, partly because of the rain and also because they are growing less, Hamman said.

Three months ago, it was questionable whether there would be any water for growers beyond early July, and now supply could be stretched to mid-August, depending on whether the rains continue, he said.

The storms also have filled the Rio Grande’s dry stretches with water needed to sustain endangered species, such as the silvery minnow, Hamman said.

And they have enabled the state to funnel more Rio Grande water to Elephant Butte to supply Texas and meet the requirements of a multistate water-sharing agreement, Hamman said.

New Mexico came into this year owing Texas 96,000 acre-feet, he said. He wants the district to do its part to keep the debt from worsening.

The debt prevents New Mexico from drawing and storing Rio Grande water, leading to reservoirs being at their lowest levels in at least 20 years.

Three weeks or even a full season of rain won’t replenish the severely depleted reservoirs, Hamman said, noting it could take years.

One downside to the storms is they caused flooding in Valencia and Eddy counties, breaching 20 ditches and clogging canals with silt.

Northern New Mexico is about to enter the wettest period it has had yet this year, said Jennifer Shoemake, a National Weather Service meteorologist in Albuquerque.

Flash flood warnings were in effect through central and western regions Friday, as storms moving southwest were expected dump as much as 2 inches of rain an hour.

The trajectory meant farmers in the Middle Rio Grande Valley could receive some unwanted torrential rain. The rain was greatly needed, but too much at one time can flood a farm field or a city road, Shoemake said.

“I know a lot of people want rain, but too much of a good thing is a bad thing,” she added.

Historically, monsoon storms have dropped an average of about 5.5 inches in the Santa Fe area and 4.5 inches in Albuquerque, she said.

A month ago, the Rio Grande had fallen below the levels of a year ago, when water officials began looking at possibly shutting down the treatment plant temporarily if the flow dropped too much.

But the rainfall has boosted the river, and if it continues at a similar rate into September, it should eliminate any threat of a shutdown, Roach said.

About 80 percent of the water needed to meet the city’s demand has come from the river, and the rest comes from well fields, Roach said. So thanks in part to the rainfall, the city hasn’t had to lean too much on groundwater.

Correction: This story has been amended to reflect the following correction. A previous version misspelled the name of Jennifer Shoemake, a National Weather Service meteorologist in Albuquerque.

Abiquiu area has received around 1 1/2" of much needed rain over the last 2 weeks since we shut down irrigation and our crops are happy.

So far rains in South Santa Fe have mostly been sparse and sporadic -- just enough to make the weeds grow like weeds! I hear there have been much heavier and more frequent rains in the area just north of Santa Fe.