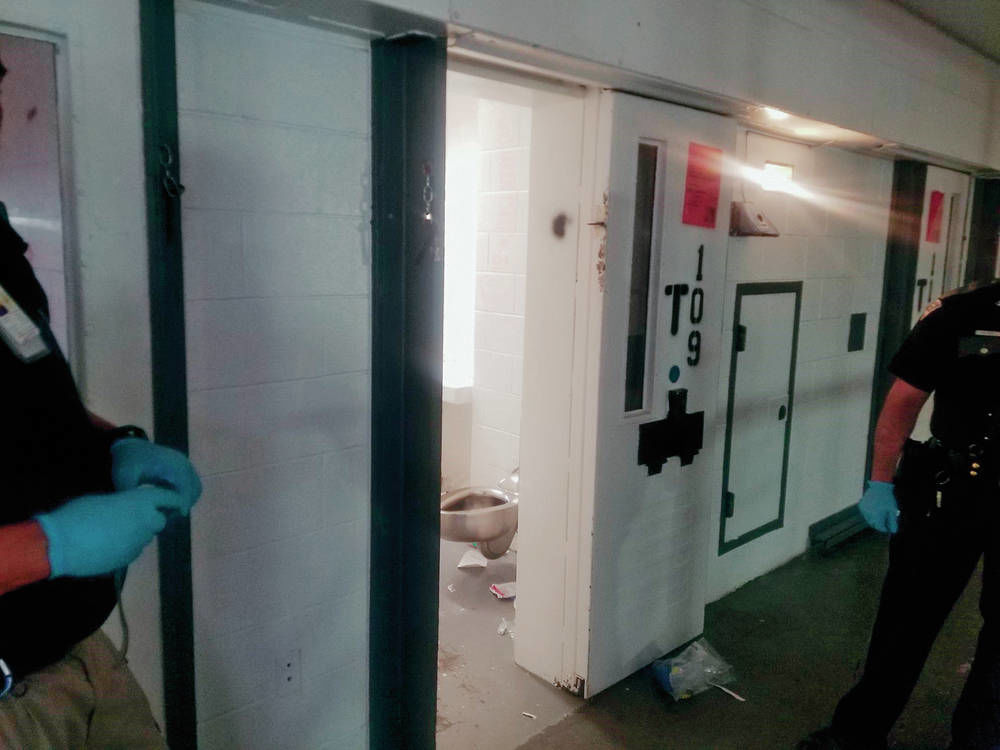 The cell where Isaiah Trinity Cabrales was held in solitary confinement at the Penitentiary of New Mexico. New Mexico State Police 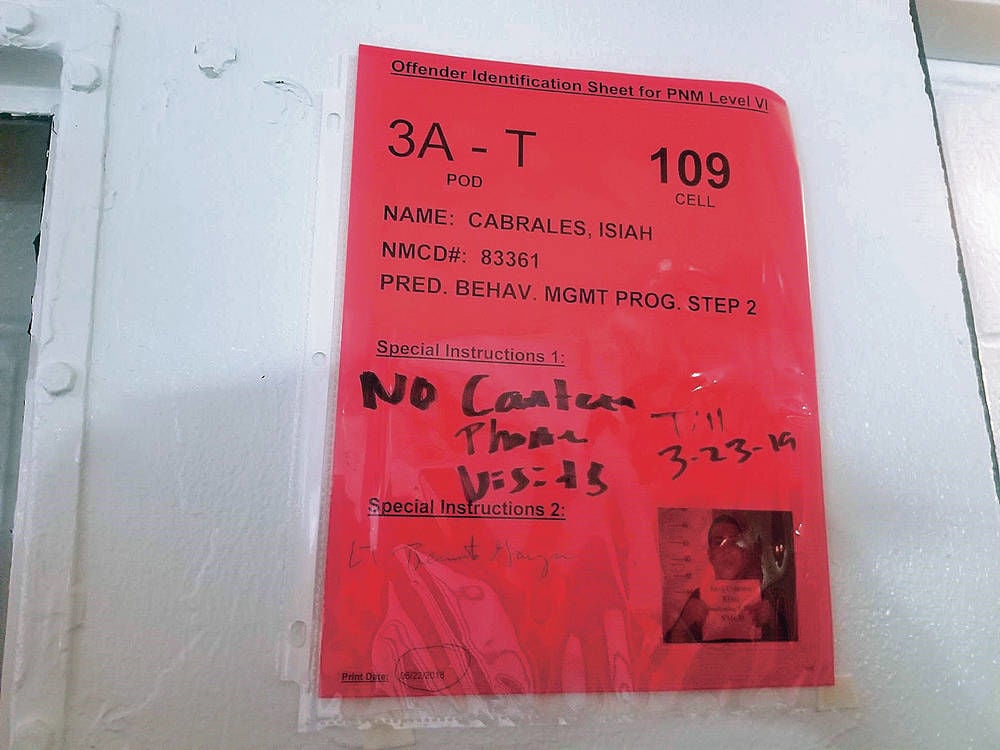 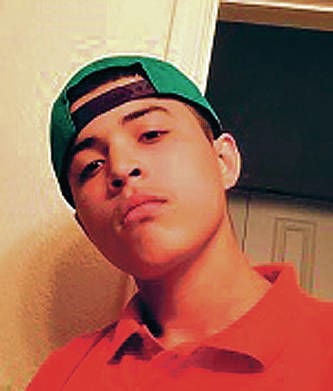 The cell where Isaiah Trinity Cabrales was held in solitary confinement at the Penitentiary of New Mexico. New Mexico State Police

The 20-year-old Las Cruces man had been in solitary confinement for seven months when he hung himself from a light fixture in his cell at the Penitentiary of New Mexico in July, according to the state Corrections Department.

He had about a year remaining on his sentence for battery on a peace officer, one he began serving in May 2017, court records show. A red sign taped to the door of his cell said he wasn’t allowed phone calls, trips to the commissary or visitors until March 2019 — a prospect Cabrales evidently couldn’t face.

“Today he went to the yard and I was talking to him and he came back and said, ‘I can’t do this no more,’ ” an inmate in a neighboring cell told state police investigators.

“I said, ‘Just tell ’em, tell ’em you don’t want to be in here anymore,’ ” the inmate continued. “I didn’t know him. But he was a kid so I kind of talked to him. You get behind these walls and sometimes these kids can’t handle it.”

After Cabrales’ death, state prison officials declined to discuss whether he had been screened for mental illness, citing medical confidentiality regulations. Court records indicate he had suffered a traumatic brain injury at some point in his life. One of his first arrests as an adult in 2016 — for battery on a health care worker — took place at a mental health hospital.

Cabrales’ death highlights the ongoing but so far futile efforts by lawmakers and social justice advocates to reform New Mexico’s use of solitary confinement — defined as 22 hours per day or more alone in a cell — which experts say has devastating effects on the mental health of inmates, particularly those already suffering from mental illness.

State Rep. Antonio “Moe” Maestas, civil rights attorney Matthew Coyte, and the American Civil Liberties Union of New Mexico have been calling for reforms in the state’s use of solitary for years.

Maestas, an Albuquerque Democrat, sponsored legislation in 2015 that would have banned the use of solitary for juvenile offenders and mentally ill inmates and limited its use to 15 days at a time and 60 days per year for all inmates.

His bill died in committee after corrections officers, county jail wardens and then-Corrections Secretary Gregg Marcantel opposed it, saying it would take away a tool needed to safely control inmates, particularly in light of chronic understaffing in state prisons.

While he headed the Corrections Department, Marcantel went undercover to spend 48 hours in solitary confinement — an attempt, he said, to understand what it’s like to be held in isolation. He subsequently pledged to reduce the the percentage of inmates held in isolation from 10 percent to 5 percent of the prison population.

But he opposed Maestas’ reform bill during the 2015 legislative session, contending the prison system needed more time to develop alternative ways of dealing with unruly prisoners. He also argued such change needed to be “forged” rather than “forced.”

Maestas and Rep. Patricia A. Lundstrom, D-Gallup, sponsored a less ambitious bill in 2017 that would have banned the use of solitary confinement for pregnant women, children and mentally ill inmates (with rare exceptions). It also would have required detention centers and prisons to report information about inmates placed in solitary on a quarterly basis.

It passed both chambers with broad bipartisan support but was vetoed by Gov. Susana Martinez.

“They’ve had four years to ratchet down their solitary confinement percentages,” he said in a recent interview. “They had a four-year head start, so now there shouldn’t be any apprehension about pulling the Band-Aid on solitary. It’s time to end solitary confinement in New Mexico, particularly for children and the mentally ill.”

“If the prisoner has a pre-existing mental illness the risks are that much higher,” Dr. Bianca McDermott, who once headed the department’s Behavioral Health Bureau, wrote in an email. “I have personally seen inmates kept in solitary confinement in New Mexico prisons for years. The worst outcome is, of course, suicide. Other inmates seem to manifest extreme rage, paranoia and impulsivity. Others become lethargic, passive, and seem to have lost social skills and coping mechanisms.”

McDermott, who has a pending whistleblower lawsuit against the department over her termination in 2015, said people need social interaction to maintain their mental and physical well-being.

“The imposition of isolation,” she noted, “is stressful on human beings and this is likely one of the reasons that jails and prisons use it as punishment.”

Just how heavily New Mexico prisons rely on the use of solitary to control their populations isn’t clear because of a dearth of reliable data and because of the ways in which corrections officials categorize inmates.

Solitary confinement is generally defined as isolation from human contact for 22 to 24 hours a day.

But there are many different terms used within the prison industry for inmates who spend the majority of their time separated from the general population — administrative segregation, medical segregation, protective custody, restricted housing — and it’s unclear if all of the inmates in those categories are included in counts provided by officials.

In 2013, the New Mexico Center on Law and Poverty and the American Civil Liberties Union of New Mexico reported “approximately 16 percent of New Mexico’s prison population is housed in some form of solitary confinement.”

The report attributed that figure to a Corrections Department presentation at the legislative Courts, Corrections and Justice Committee but said in a footnote: “In a subsequent conversation with Jerry Roark, NMCD Director of Adult Prisons, Roark suggested that this figure might be an over-estimate. In any case, the current number is definitely over 10 percent.”

The average rate of prisoners in segregation in federal prisons at the time, the advocacy groups said, was around 7 percent.

In 2015, a Corrections Department spokesman told The New Mexican the state’s rate of solitary confinement had dropped from about 10.1 percent in 2012 to “about 6.6 percent.”

In July of this year, Roark told lawmakers the state prison system had reduced its use of solitary from 12 percent [in 2012] to 4 percent.

But on Sept. 10, Corrections Department spokesman S.U. Mahesh said 507 of the state’s approximately 7,000 inmates — about 7 percent — were in restricted housing, and said when Roark spoke to the Corrections Committee, the restrictive housing population was at 5 percent.

Mahesh said an increase in inmate violence is responsible for the spike between the 4 percent Roark reported to lawmakers in July and the 7 percent he cited in September, saying the figure fluctuates between 4.5 percent and 7 percent, depending on violent inmate behavior.

Asked for information about the department’s approach to solitary, Mahesh said via email the department has reduced the number of inmates in solitary for protective custody purposes by creating separate units for sex offenders and former law enforcement officers.

Asked whether any review process exists that examines the use of solitary or sets goals for reducing its use, Mahesh referred a reporter to policies on the department’s website. None directly address those issues.

Asked whether there are any caps on the amount of time an inmate can spend in isolation and whether some New Mexico inmates spend years in solitary, Mahesh replied:

“An inmate’s length of stay in [a] restrictive housing unit varies from inmate to inmate and their willingness to change their disruptive and violent behavior.”

Maestas and Sen. Mary Kay Papen, D-Las Cruces, say they’ll co-sponsor a new bill addressing the issue in the next legislative session and are hopeful it will have a better chance of passing with a new governor in office.

“I think we need to look at something and say, ‘Does it work?’ ” Papen said in a recent phone interview. “You put someone in solitary confinement so, what, you break their spirit? Do they behave better forever or do they simply behave better for a week? I just want to make sure we are stabilizing people and not doing damage.”

Rick Raemisch became executive director of Colorado’s Department of Corrections in 2013 after his predecessor, Tom Clements, was assassinated …