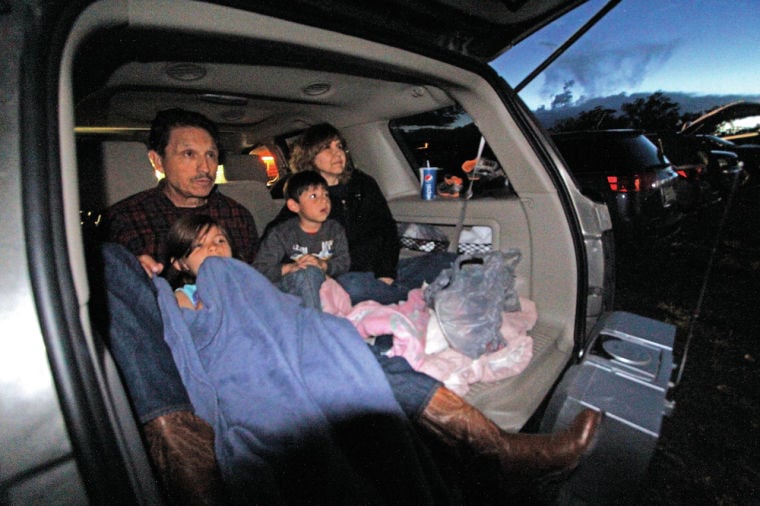 Las Vegas residents Steve Sanchez, Deborah Sanchez and their grandchildren Michael Sanchez, 5, and Esperanza Sanchez, 7, watch The Amazing Spider-Man 2 from the back of their SUV Friday at the Fort Union Drive-In. 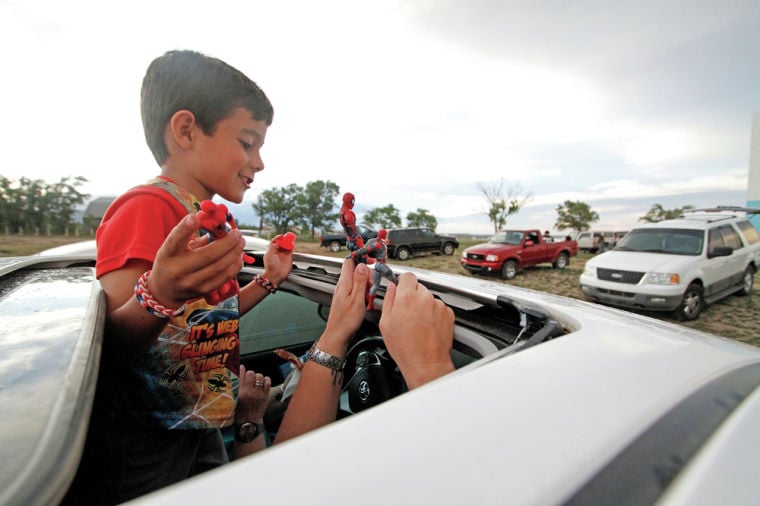 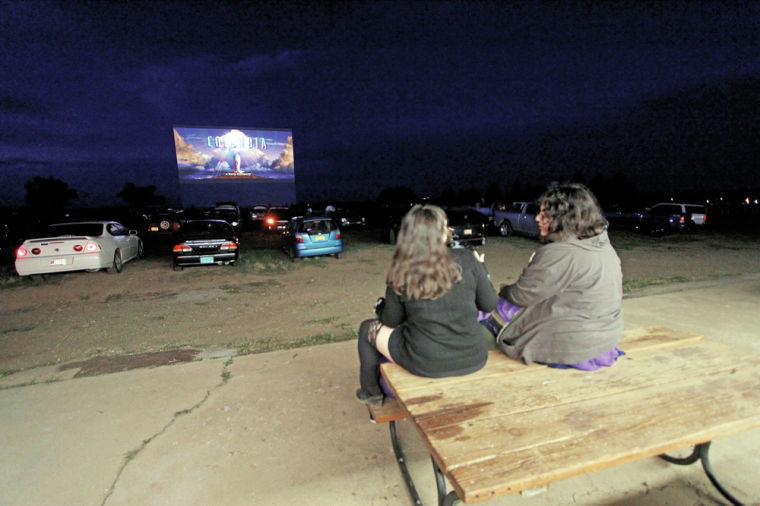 From left, Diandra Perez and Brandi Aragon watch The Amazing Spider-Man 2 from the table in front of the concession stand at the Fort Union Drive-In on Friday. Luis Sánchez Saturno/The New Mexican 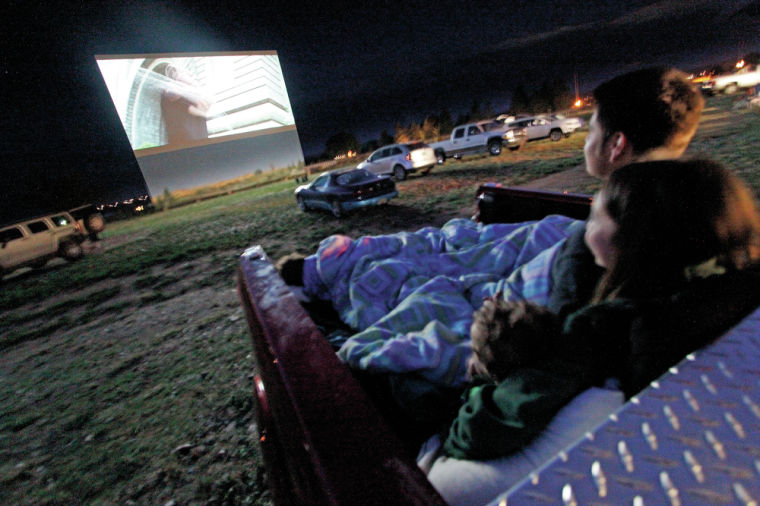 Las Vegas residents Steve Sanchez, Deborah Sanchez and their grandchildren Michael Sanchez, 5, and Esperanza Sanchez, 7, watch The Amazing Spider-Man 2 from the back of their SUV Friday at the Fort Union Drive-In.

From left, Diandra Perez and Brandi Aragon watch The Amazing Spider-Man 2 from the table in front of the concession stand at the Fort Union Drive-In on Friday. Luis Sánchez Saturno/The New Mexican

A light rain fell Friday evening as a 5-year-old Spider-Man poked his masked head out of the sunroof of his grandmother’s car, scoping out the scene at the Fort Union Drive-In near Las Vegas, N.M.

A double rainbow brightened to the south. Fading sunlight burnished the prairie to the east. Teenagers and senior citizens wandered over to the concession stand to pick up pizza and popcorn. Families huddled under blankets, laughing and talking, as the night air cooled. Music blared from a few of the 65 vehicles parked in front of the screen.

Nathan Burch pulled off his Spider-Man mask. He was a little impatient that the movie about his favorite superhero hadn’t started. He held three Spidey dolls in his hands. “I bring them so they can watch,” he said.

It was the drive-in’s opening night for the season, a night that almost didn’t happen.

Like many people gathered to enjoy the double feature of The Amazing Spider-Man 2 and The Monuments Men, Nathan’s grandmother, Angel Burch, was delighted and grateful the drive-in had opened for another year. Angel Burch said she’s been coming to the Fort Union Drive-In every summer since she was a little girl. She brought her children there when they were young and is now happy to share the experience with her grandson.

“This is a piece of nostalgia. This is priceless,” she said of the drive-in, one of only two left in New Mexico.

Moviegoers young and old carry memories of this place. There isn’t much else to do on a weekend in this town of fewer than 14,000 people. The town’s last indoor theater, the Kiva, closed last fall for the same reason the drive-in almost didn’t reopen: All theaters had to switch from 35 mm film to digital projectors by this year as movie companies stopped using film. The switch isn’t cheap.

For months, with the indoor theater closed and the drive-in not yet open, Las Vegas residents yearning for a big-screen experience had to drive to Santa Fe.

The Ulibarri family, four strong plus a friend, sat in the bed of a big Dodge Ram, munching on popcorn, sipping root beer and waiting for the two pizzas they had ordered. “We’re here every weekend,” Abie Ulibarri said.

They park in the same spot every time. They’ve been at the drive-in when it has rained and hailed, and when lightning has flashed in the sky.

“We were worried it wouldn’t open. We love it here,” said his wife, Ramona Ulibarri, who recalled watching Spanish-language movies at the drive-in decades ago. “When it’s a clear night, I like to lay back and look at the stars.”

Steve Sanchez remembers falling asleep before the midnight end of a double feature when he was a young man. He and his buddy woke up and realized they were the only car left at the drive-in, and the gate was locked. “Our family called the police. They had to come let us out,” he said.

Chris Chavez, 14, sat on a bench outside the concession stand with his buddies Isaiah Sandoval, 15, and Marcus Trujillo, 14. All three said they had worried the drive-in wouldn’t reopen. Sure they ride four-wheelers, play video games and hang out at each other’s houses. But the drive-in is kind of special in a small town with little else.

Jake Cordova, 18 and fresh out of Robertson High School, is the drive-in’s new general manager. Cordova grew up going to the drive-in and worked at Fort Union the last couple of years handling security and fixing the old projector. Now, he’ll be running the whole show, from hiring staff to keeping the concession stand stocked.

It was touch-and-go to get the drive-in ready for Friday’s reopening. Parts for the new digital projector didn’t arrive until Thursday morning. A vehicle rolled over Thursday afternoon off N.M. 518, and Cordova had to interrupt last-minute preparations to help out the driver as a first responder.

At $20 a carload, Fort Union is still a bargain, especially for more than two people in a vehicle. Angel Burch said the cost of tickets and concessions for three at a movie theater in Santa Fe runs more than $60, and that doesn’t include the gas to drive there.

Jeanna Diluccio, who managed Fort Union for almost 20 years — and once called the drive-in “a place of the past, of a simpler time, a sweeter, gentler time” — credits property owner Gilbert Pino with supporting it all these years. She said he could have easily torn it down and sold the land for top dollar.

That’s what happened to drive-ins all over the country.

Auto products salesman Richard Hollingshead is credited with inventing the drive-in. After experimenting with sheets, projectors, radios and cars parked at different angles, Hollingshead opened the first drive-in theater in Camden, N.J., on June 6, 1933. Thousands more sprang up around the country in the years that followed.

In the industry’s heyday, New Mexico sported at least 45 drive-in movie theaters, according to information gathered by Drive-Ins.com. The site, managed by brother-sister team Kipp Sherer and Jennifer Sherer Janisch, is a repository of history and photos of more than 5,000 drive-ins, all but a few hundred now closed.

Carlsbad’s Fiesta Drive-In is the only other one in New Mexico besides Fort Union. The drive-in was constructed in 1948 and operates three screens year-round, with space for up to 600 vehicles.

The Fort Union Drive-In holds half that number of vehicles and has only one screen. It is usually open from May through September.

Kipp Sherer and his sister launched the website as an excuse to work on a project together, drive across the country and document a disappearing part of Americana.

Wherever they stopped on road trips to gather information about a drive-in, people would share their memories. The project “kind of got so big it took on a life of its own,” Kipp Sherer said.

Drive-ins have advantages indoor theaters still lack. “You can come in your own car. You can move around in the fresh air. You can sit in a lawn chair, lay against pillows, look up at the stars and the screen at the same time,” Cordova said.

Drive-ins began dwindling in the 1970s, not for want of customers but due to the value of the land on which they sat, Kipp Sherer said. Most drive-ins were built outside towns. As the towns grew up around them, their land became valuable real estate for Wal-Marts and other commercial ventures.

Another factor was lack of interested heirs. Many drive-ins were family-owned, Sherer said. As the parents aged and other work promised better pay, no one in the family wanted to take over management.

The need to switch from film to digital projectors is just the latest challenge for drive-ins, he said.

Still, he thinks a few will survive. “I think drive-ins will always be around in some form or another.”

Cordova hopes Sherer is right, especially since his family is now vested in Fort Union. “This is almost a once-in-a-lifetime experience now that there aren’t so many left,” he said. “We wanted the younger generation to experience what we experienced.”

“I could kiss those guys,” said George Contreras as he leaned against his truck waiting for the movie to start. “They did a good thing. This is one of the luxuries we have here.”

Months ago, at the end of the last drive-in season in September, Diluccio and others put out a call for help. They needed to raise tens of thousands of dollars to buy a new digital projector, or the drive-in couldn’t reopen.

Diluccio, business owner Tito Chavez, the Las Vegas Chamber of Commerce and others tried to raise the funds from the community. But Las Vegas isn’t a rich town. By spring, they simply didn’t have enough money, Diluccio said.

Then Cordova stepped in. He asked his grandfather, former Taos County sheriff Felipe Cordova, to help buy the projector and take over the drive-in. The elder Cordova said he recognized the need. “Las Vegas doesn’t have many other forms of entertainment,” he said. “You often wonder why they discontinue this kind of entertainment that brings the community together.”

Felipe Cordova has faith in his grandson’s ability to run this show. “He definitely knows what needs to be done,” he said from his Taos home in May. “He’s fixing the place up. He put together the staff.”

Diluccio will continue booking movies for the drive-in. But she said she was ready to step away from management.

The old 35 mm projectors sit under cover in a corner of the projection room next to the new digital one. Gilbert Pino is keeping them, Diluccio said. “They are the original carbon arc projectors. They’re beauties.”

Jake Cordova already has some new ideas for the drive-in. He’ll open an extra day every week, Thursday through Sunday. He hopes to keep the theater open through October.

As a steady stream of cars pulled into the drive-in under a rising full moon Friday, he looked around, satisfied. The projector had worked. People were coming. It was a good first night.

“We did this for the community,” Cordova said. “We didn’t want this to go under.”

Can't wait to head to La's Vegas for a double feature! Not to mention delicious piazza!

There is also a Drive-in on Rt 84 heading west out of Lubbock Texas.

I loved taking my girlfriend to the Drive-In after I became old enough to drive, not sure her parents liked the idea tho.....