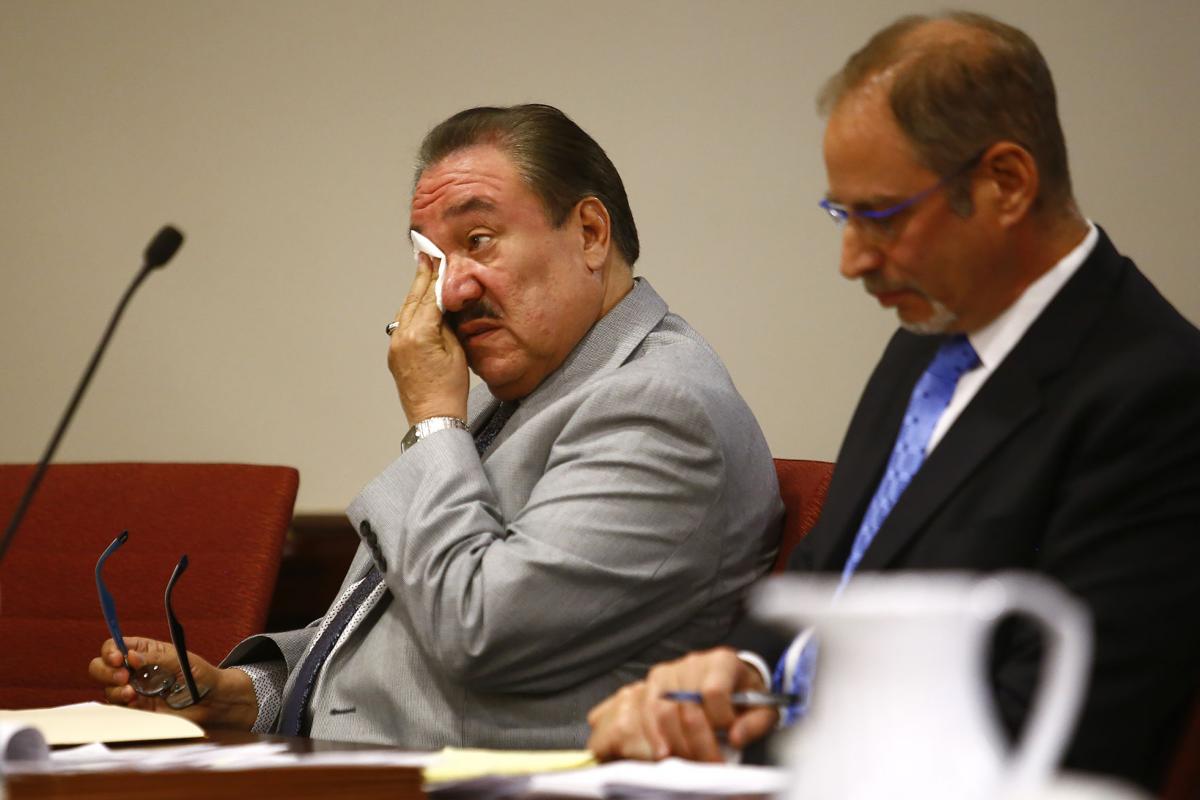 State Sen. Richard Martinez wipes tears from his eyes Tuesday during his sentencing. In his statement to the court, the Ojo Caliente Democrat asked for forgiveness. 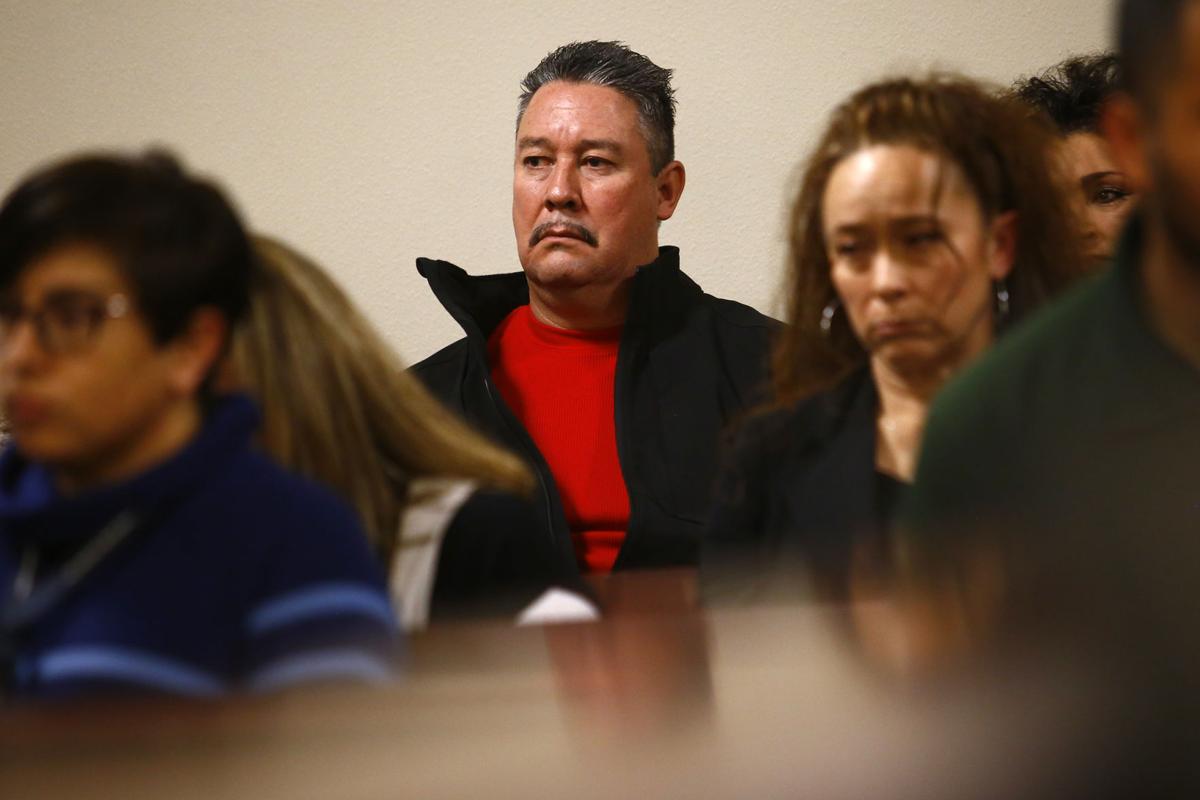 Johnny Sisneros, whose car was struck by state Sen. Richard Martinez in a drunken-driving crash, listens to Martinez’s sentencing statement. Sisneros said after the hearing he did not feel the five-day sentence was just or believe Martinez’s apology in court was sincere. ‘I feel it was another ploy,’ he said.

State Sen. Richard Martinez wipes tears from his eyes Tuesday during his sentencing. In his statement to the court, the Ojo Caliente Democrat asked for forgiveness.

Johnny Sisneros, whose car was struck by state Sen. Richard Martinez in a drunken-driving crash, listens to Martinez’s sentencing statement. Sisneros said after the hearing he did not feel the five-day sentence was just or believe Martinez’s apology in court was sincere. ‘I feel it was another ploy,’ he said.

State prosecutors had asked for the maximum sentence of 90 days for each charge — a total of 180 days. Martinez faced a mandatory five days of incarceration for the reckless driving charge and a minimum of 48 hours in jail for the aggravated drunken-driving charge.

State District Judge Francis Mathew decided to sentence Martinez to five days in jail for each of the two charges but said the sentences would be served concurrently — meaning the total number of days in jail would only be five.

“As a judge, as a legislator, you asked the people of Rio Arriba County and your legislative district to trust you that you would act in their interest, including protecting them from the harms and dangers arising out of people violating the laws of the state of New Mexico,” Mathew said. “You violated that trust when you drove under the influence of alcohol on the evening of June 28, 2019, and every other time you may have driven under the influence of alcohol.

Martinez, a Democrat who lives in Ojo Caliente, must report to jail by Jan. 14, meaning he will have served his jail time before the start of the legislative session Jan. 21. Martinez’s attorney, David Foster, asked the judge for permission for Martinez to serve his time in Santa Fe County, and the judge granted the request.

According to the sentence, Martinez also is required to attend DWI school and must have an ignition interlock device installed in his vehicle.

The senator has the opportunity to appeal, but Foster declined to say after the sentencing whether Martinez will do so.

Martinez apologized for the drunken-driving crash in a statement to the court, looking back at victims Johnny and Gerrie Sisneros in the gallery and at times choking up.

“I’m asking you to please find it in your heart to forgive me for this mistake that I made,” he said. “I’m a good man, I’ve worked hard all my life as a public servant.”

Before that, Johnny Sisneros gave a statement in which he also became emotional while talking about the injuries he and his wife suffered and the negative effects the crash has had on their lives. He asked the judge to give Martinez the maximum possible sentence.

“We did not ask for this,” Sisneros said. “We did nothing wrong.”

Sisneros added that the senator had “never displayed any remorse and has never apologized for his senseless actions.”

Foster and multiple family members, including the senator’s niece and sister, lambasted news coverage of the crash and trial.

“Much has been said by the media about my uncle and that he isn’t remorseful,” said the senator’s niece, Marcia Martinez. “He’s not a selfish man or a self-serving man.”

Richard Martinez declined to comment on the sentencing after Tuesday’s hearing. He did, however, criticize news media.

“I feel that I was treated very unfairly by the media,” he said.

Sisneros said after the hearing he did not feel the sentencing was just, and he didn’t believe Martinez’s apology in court was sincere.

“I feel it was another ploy,” he said.

Mathew found Martinez guilty Dec. 17 after a day and a half of testimony in a bench trial that came nearly six months after the senator slammed his Mercedes SUV into a Jeep at an intersection in Española.

On Dec. 28, Senate Democrats announced Martinez would step down from his committee leadership roles, including as chairman of the Senate Judiciary Committee. But he declined to resign from his legislative seat, despite an earlier call by Gov. Michelle Lujan Grisham for him to step down.

Milan Simonich contributed to this report.

To hear his supporters tell it, state Sen. Richard Martinez was as much a victim as the couple he scarred while driving drunk.

Guys, it was predictable. Honestly, I had no doubt that it would end just like that! If you look at the comments of lawyer Peter Briskin on this situation , then he also spoke about this in principle.

He should be in jail. He knows the consequences for drinking and driving especially for an elected official. Shame on the jury!

That must have been an onion- infused tissue.

The judge! Did he impose justly? When a defendant chooses to plead innocent when the evidence is overwhelming he/she should be given the full sentence! But more so when they are state senators or any local politician! What ever happened to the ethics commission? What lesson does 5 days in jail send to the general public about corruption in New Mexico? Mr. Martinez must step down! As for the judge; he'll continue to attend legislative lunches, functions, rubbing elbows with (not voters) but his political cronies who violate the laws who must hold a higher standard when they break them!

Its easy to be outraged here but in the Judge's defense, this seems to be a first offense. How does this sentence compare to other first offenses? Sure, we expect more from a Senator, but I am not sure we can have a double standard of justice. If this is less jail than Joe Q. Public would get, we should be outraged.

And, there is the Judicial Performance Evaluation Commission.

When Judge Sheri Raphaelson went easy, not once but twice, on a teen who was breaking into homes and stealing guns up in Los Alamos, we used the retention system to get her off the bench. Los Alamos County made the difference in that election. I think she got about a 40% approval from LAC and that brought her below the 57% minimum.

People have to put their ballots where their mouths are.

Judge Matthew has already faced a retention election, so, for his part, he’s not going anywhere.

The state senator should be voted out.

Anyone know where the petition to remove State District Judge Francis Mathew from the bench is located?

New Mexico rants in the top ten states for DUI and now we know why...judges. How can we trust our justice system. New Mexico also ranks in the lower half of the country for weakest DUI penalties. If marijuana is approved, DUI's will rise, more deaths or disabling injuries. The media more than treated this man fairly. He lied 3 times to police about how much he drank, refused to take a breatherlizer test, couldn't count straight, rammed into a car damaging it and causing life-time disability that curtails his employment and ability to support his family. Now he is he asks for forgiveness when he is about to be given his sentence, not before. He committed a serious crime. People with lesser offenses receive more. Not one order to make restitution or a financial penalty. Our justice system is broken.

I don't often feel I know how to vote on judges but now I know for sure that I'll be voting against Judge Francis Mathew.

I am so embarrassed for northern NM.

And this is why we have a drunk driving problem in New Mexico. A hypocrite who knew exactly what risks he was imposing on others drove drunk, had an accident involving others, tried to use his influence to get officers to ignore it, refused a breath test, and denied any culpability or responsibility right through to his sentencing. And for this he gets. . .five days in jail? Wow. THAT should be a great deterrent. Nice job, judge. Thanks for once again making the highways less safe for the rest of us.

We really DO live in a "good ole boy" community!

The real jury will have its say in the primary and if not then, on Election Day.