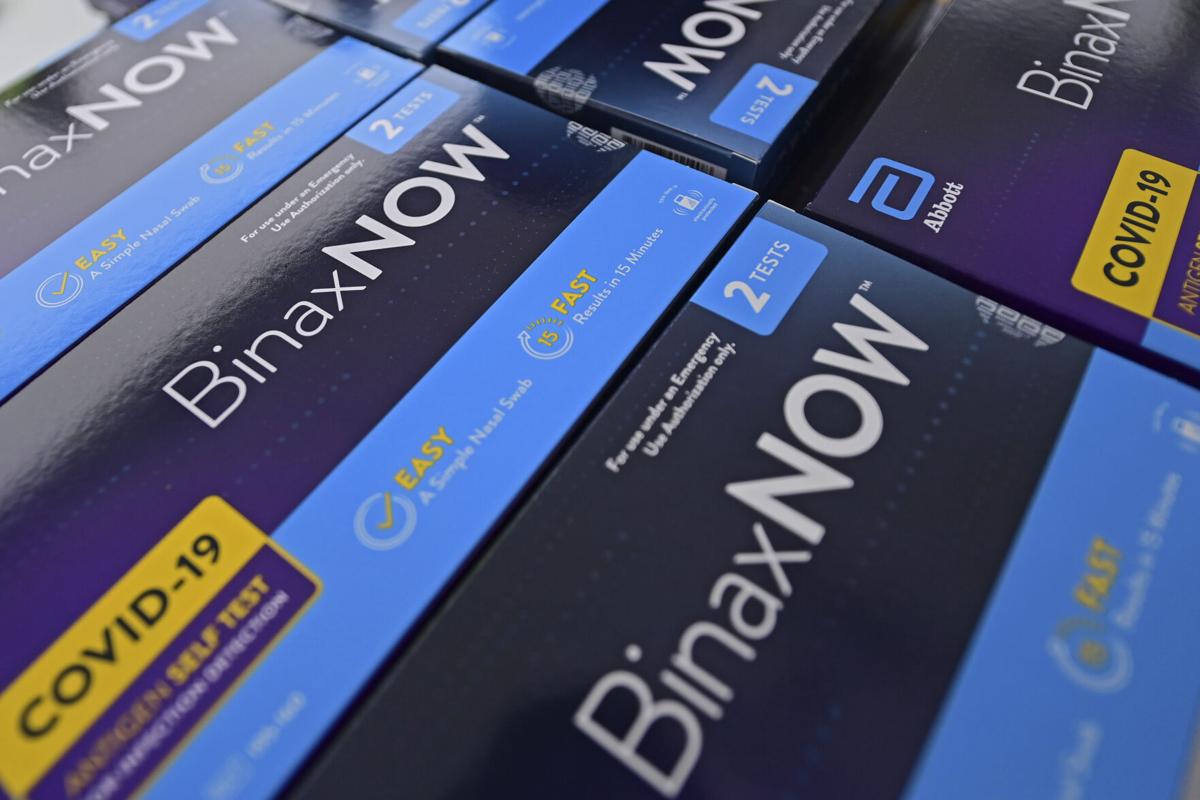 At-home COVID-19 tests kits sit on a table before being handed out at a distribution site, Thursday in Youngstown, Ohio. 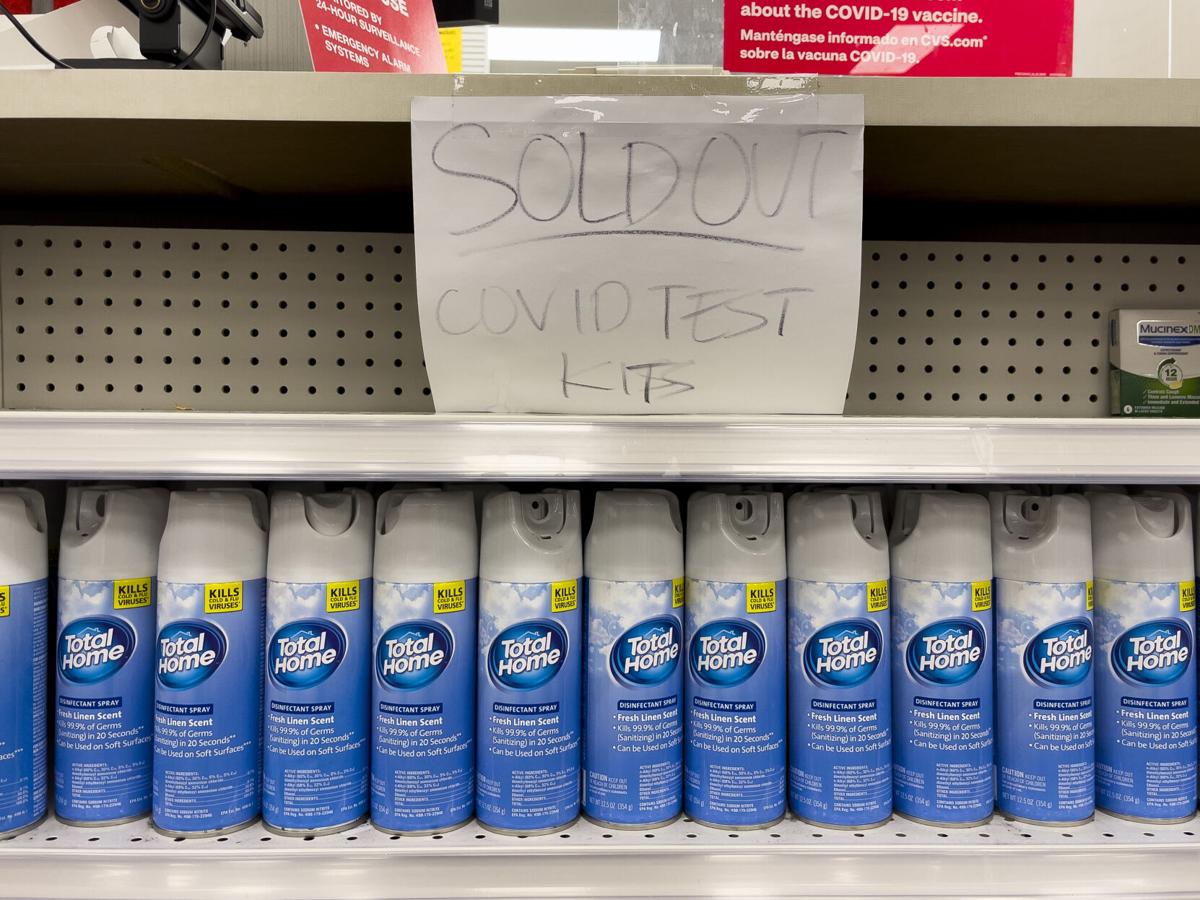 A handwritten notice is posted on an empty shelf after at-home COVID-19 test kits were sold out last week at a CVS store in La Habra, Calif.

At-home COVID-19 tests kits sit on a table before being handed out at a distribution site, Thursday in Youngstown, Ohio.

A handwritten notice is posted on an empty shelf after at-home COVID-19 test kits were sold out last week at a CVS store in La Habra, Calif.

Recently authorized over-the-counter tests for COVID-19 that boast rapid results might not always detect the disease in its early stages, a local hospital director says.

The home tests also appear to be in short supply, at least in the Santa Fe area.

And positive home test results generally aren’t reported to the state Department of Health, bringing a new level of uncertainty to statistics.

Mary Jo Metzger, executive director of diagnostic and respiratory care services at Christus St. Vincent Regional Medical Center, said she wouldn’t use the home tests to decide whether to go to a party or an event. People in the beginning stages of the disease may test negative for it, have a false sense of security and be contagious nonetheless, she said.

“But I know a lot of people are doing that,” Metzger added.

She noted the state’s coronavirus case count is likely to become less accurate from the rapid home tests because positive results from them won’t be reported to the state’s tracking system. “So then, your data gets to be a little bit skewed,” she said.

New Mexico’s test positivity rate — which had risen to 20 percent Tuesday — also will be affected.

Department of Health spokeswoman Katy Diffendorfer confirmed positive results of home tests aren’t reported to the state, which will lead to an undercounting of cases.

Still, state health officials demonstrated how to use the rapid home tests in a Dec. 22 news conference and endorsed them. The federal government also backs the use of the tests, which are available in pharmacies and produce results in minutes.

Federal Health and Human Services Secretary Xavier Becerra said last week, “Increasing Americans’ access to easy-to-use, reliable COVID tests is a top priority for the Biden administration, and we are using all resources at our disposal to make more tests available and ramp up supply.”

Several varieties of rapid home tests for COVID-19 are available, including the BinaxNOW, iHealth, QuickVue and On/Go, although finding them can be challenging. One pharmacy employee in Santa Fe who declined to be named said his store had some last week and they sold out quickly. He recommended going online to try to acquire them.

The CVS website indicated Tuesday the company was running low on rapid home tests. “Due to high demand, deliveries may be delayed,” the site said.

And the Walgreens website said its BinaxNOW supplies were “out of stock for shipping.” It suggested visiting Walgreens stores to check on availability.

A spokesman for Abbott, John Koval, wrote in an email his Illinois-based company has experienced “unprecedented demand for BinaxNOW, and we’re sending them out as fast as we can make them. This includes running our U.S. manufacturing facilities 24/7, hiring more workers and investing in automation.”

The state is “really trying to get the word out on how to use these tests,” Parajón said. She demonstrated the multistep process of using the Binax version.

She said a Health Department staffer had thrown a small party in which he insisted attendees be tested beforehand. “And so these rapid tests are really helpful for if you’re going to have a gathering, [get tested] on that day. … It’s really important that we actually have a way to check on that day how infectious you are. And that’s what these tests really do.”

A Health Department spokeswoman wrote in an email Tuesday the agency knows the results of the new rapid home tests “are not 100 percent accurate,” but “they can provide some information about the need to quarantine or follow additional guidelines.”

A kit with two tests generally costs about $24, and results come back within 15 minutes.

The state also offers a free home testing program through Vault Health in which a patient registers for a test kit and receives one through expedited shipping. The sample, taken during a virtual session with a Vault supervisor, is then shipped to the lab in a prepaid UPS package. But results come far more slowly — 24 to 48 hours after the sample arrives.

The state’s daily supplies of the Vault test also have been strained. The Associated Press reported late last week the free tests were in such high demand Thursday they had run out by the afternoon. The company was offering paid testing to state residents instead.

Christus St. Vincent’s Metzger said a home test that produces a positive result usually is accurate. But if a person is in an early stage of COVID-19, the test might not pick it up. A patient needs to have symptoms for two or three days for the key protein in the home tests to be detected.

She said a more reliable test is the polymerase chain reaction test administered at some hospitals and laboratories — the kind of testing offered by Vault Health.

If a person doesn’t have access to PCR lab testing, however, a rapid home test can have a place in diagnosing symptomatic coronavirus, Metzger added.

"And positive home test results generally aren’t reported to the state Department of Health,..." Excellent, as it should be.

I spent an hour online over the weekend trying to find home tests in vain. I couldn't find them anywhere. Some speculate that Biden's announcement he was buying millions of them to give away free prompted panic buying.

But Biden had a solution in this lecture yesterday, very simple:

The Vault hole tests that the state pays for have been very helpful to us and have been faster than expected when it comes to results. We have ordered them in advance to have them on hand when we need them. The last three tests sent in have shown results within 12 hours of the lab receiving them for a total of 36 hour turn around. It’s still slower than at home testing but they are PCR accurate. We also experienced supply shortages with Vault this past week but found if you apply first thing in the morning the quota is available. I certainly do wish there was more testing sites and info on testing sites around and agree there is no excuse for the lack of tests at this point in the game. We were infected by an asymptomatic, vaxxed and boosted family member over Christmas who had tested negative with an at home rapid test. I don’t think Asymptomatic people are testing positive with at home rapid tests, at least not in our situation. Now if only the CDC could settle on post Covid protocols!

"We were infected by an asymptomatic, vaxxed and boosted family member over Christmas who had tested negative with an at home rapid test." Wow, talk about beating the odds and being very unlucky, Fauci would not be happy. And this is not a very good advertisement for vaccines, boosters, and tests.

This is a failure of this Administration for not getting in front of this problem by ordering and paying for test kits 6months ago. It’s the same as not having anti viral meds at every hospital which would have decrease the loads in hospital beds and care. We went from pro active to reactive someone is asleep at the wheel.

Of course, we know that if Trump was still in office the media would be crucifying him for this right now.....

[thumbup]And many still think it is all his fault......