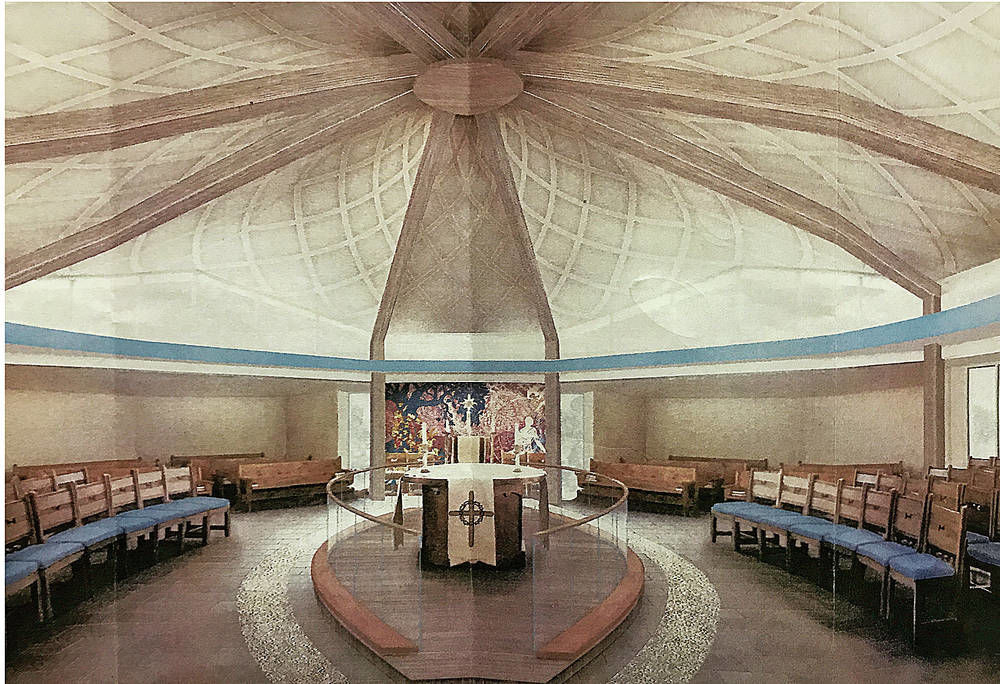 A rendering shows how St. Bede’s new sanctuary will look, with a mosaic designed by artist John Alan Warford at center in the back. Anne Constable/For The New Mexican 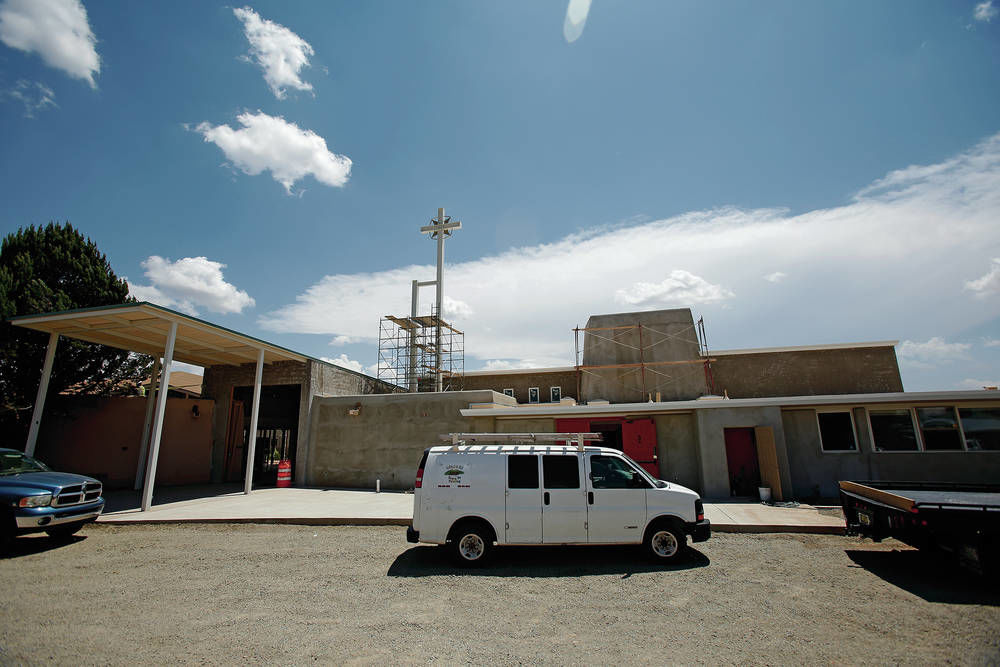 St. Bede’s Episcopal Church is undergoing a major renovation. Members will get to see the progress on one of several tours on Sunday. Luis Sánchez Saturno/The New Mexican 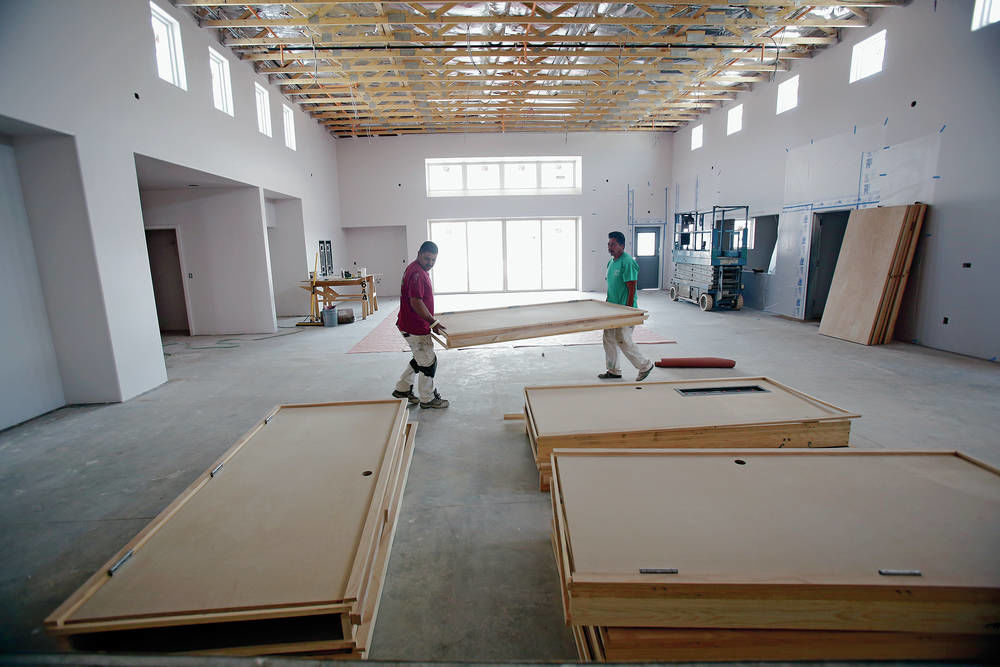 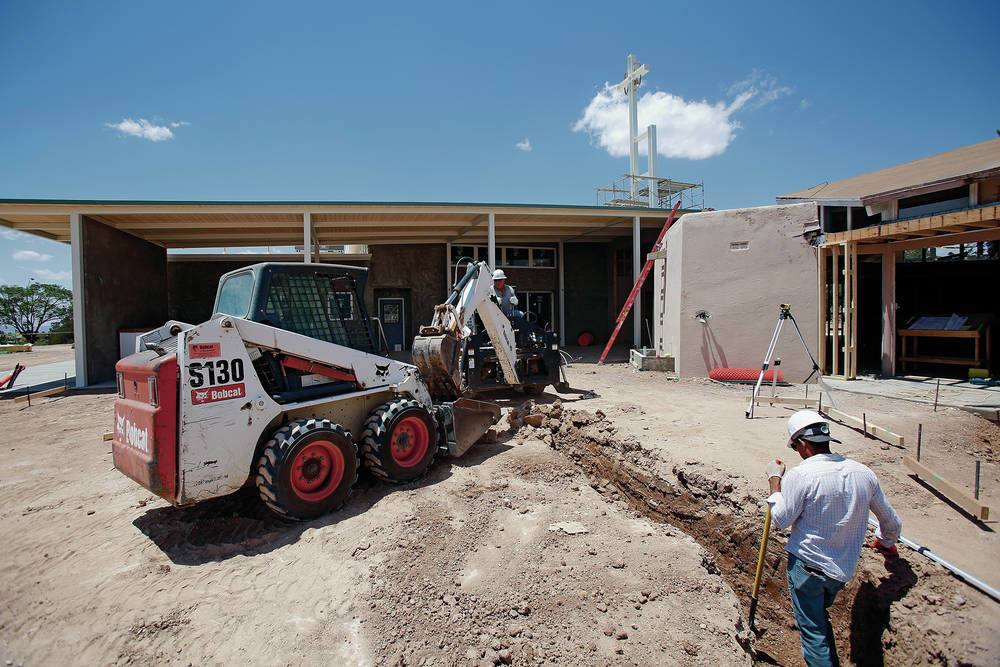 Contractors dig up the area for the foundation for an addition to St. Bede’s Episcopal Church last week. Luis Sánchez Saturno/The New Mexican 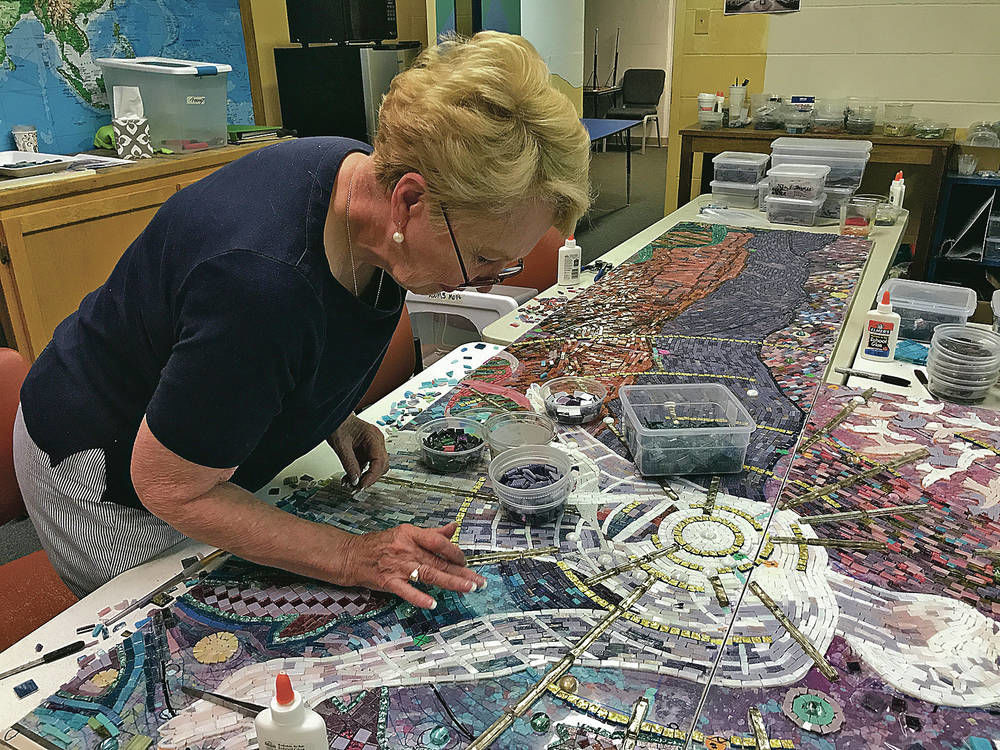 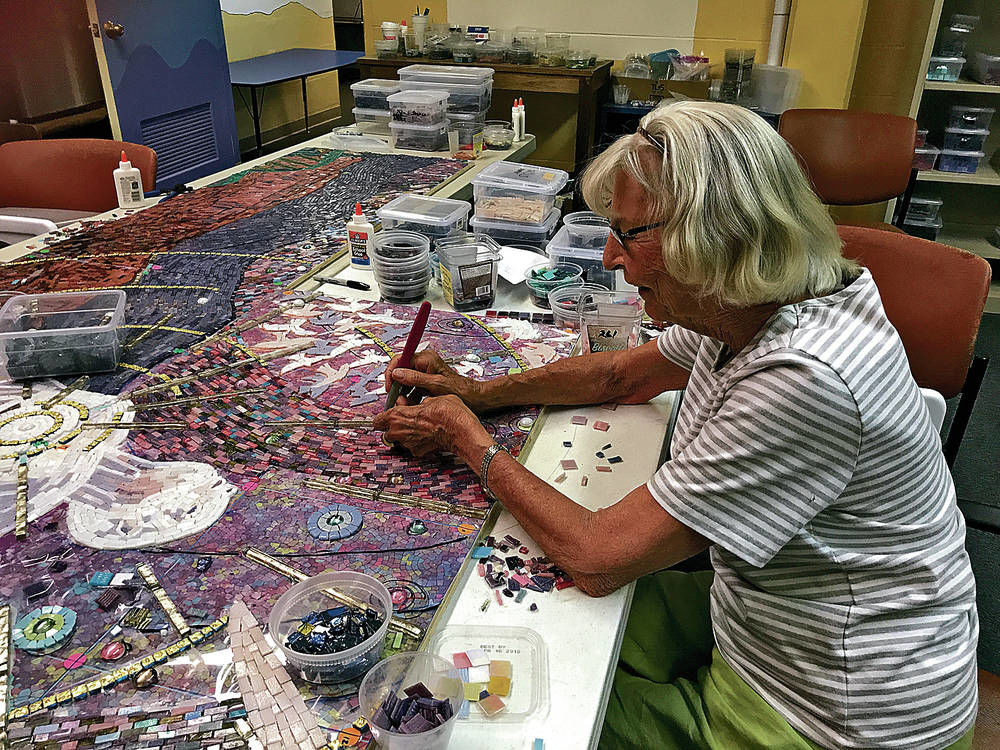 Pete Forbes, a member of St. Bede’s, works on the creation mosaic for the church’s new sanctuary. Anne Constable/For The New Mexican

A rendering shows how St. Bede’s new sanctuary will look, with a mosaic designed by artist John Alan Warford at center in the back. Anne Constable/For The New Mexican

St. Bede’s Episcopal Church is undergoing a major renovation. Members will get to see the progress on one of several tours on Sunday. Luis Sánchez Saturno/The New Mexican

Contractors dig up the area for the foundation for an addition to St. Bede’s Episcopal Church last week. Luis Sánchez Saturno/The New Mexican

Pete Forbes, a member of St. Bede’s, works on the creation mosaic for the church’s new sanctuary. Anne Constable/For The New Mexican

On Wednesday, some 20 construction workers were busy painting, digging, drilling and plastering at St. Bede’s Episcopal Church on the corner of St. Francis Drive and San Mateo Road. The 1963 church is undergoing a major renovation with a fall completion date targeted.

“We are taking care of our facility and making it new for generations to come,” said musical director Jerry Nelson, as he delivered items to be painted.

A few blocks away in a small room at St. John’s United Methodist Church, where the St. Bede’s community has congregated since construction began, some parishioners were painstakingly gluing thousands of tiny pieces of glass to panels that will later be joined to create an 8-by-12-foot mosaic for the east wall of the remodeled sanctuary.

Designed by artist John Alan Warford, who painted the inside of the Cathedral Basilica of St. Francis of Assisi during its latest and much-acclaimed renovation, the piece depicts the creation. It includes a human figure on the right; the sky, the seas and birds above; fish below; grapevines and a mesa reminding some of the cliffs at Abiquiú Lake surrounding; and in an acknowledgement of modern science, a DNA molecule stretched across the bottom.

To assisting priest Connie Delzell, the message is that God never stops working on creation. The mural, which was begun a year ago and is expected to be completed by the end of the month, will be “another beautiful thing to attract tourists and residents,” Delzell said.

Longtime parishioner Pete Forbes said she believes the new St. Bede’s will be a “showcase” that will “make an impression on Santa Fe.” At least, she quipped, it will no longer look like a community center.

The renovation is a major undertaking. Rector Catherine Volland said the original church was built on a shoestring when the congregation was just getting started and before the construction of St. Francis Drive. The eight-sided, hogan-shaped structure on the east end was intended to become a community room after a traditional church was erected in the middle of the building. But that never happened.

“St. Beders” continued to worship in the round in a space designed with help from students from Santa Fe Indian School. Over the years, time — and steady, hard use — took a toll.

The church was confronting myriad structural problems. The roof was leaking and was nearly beyond repair. Some rooms had no heat. There were serious cracks in the floor and walls, and there was dry rot along the south side around the eaves and windows. And the parking lot was 2 feet higher than the building, causing water to drain into the church on its way to an arroyo.

Under the Rev. Richard Murphy, the previous rector, the congregation had contemplated a far more ambitious renovation that would have housed a mosque, and a worship space for the Jewish community, in addition to the Episcopal congregation. But the idea was abandoned when the estimated cost came in at more than $6 million.

About four years ago the church began seriously considering a more modest but still transformative renovation, one that would maintain much of the original structure and footprint. An architect was asked to come up with conceptual plans to give the community an idea of the cost. Eventually the congregation, which numbers about 175 on most Sunday mornings, raised about $3 million to cover renovations and some furnishings.

Among the results is a dramatic new entryway with a covered portal that reaches the curb and continues the length of the building. The sanctuary will continue to be in the hogan-shaped structure, but the carpet and acoustic ceiling tiles will be replaced by a ceramic floor and a painted ceiling by Warford, changes that will, it is hoped, improve the aesthetics and the sound of the organ and choir. About 30 seats will be added to the worship space.

Volland said some consideration was given to building a new church. But “we didn’t do that because we’re so fond of our existing worship space,” she said.

The new common room is larger and much more functional. It is now rectangular with a higher ceiling, clerestory windows and large sliding glass doors that open toward the sanctuary to the east. There is a new kitchen, an updated classroom and room in the main area for 135 people to be seated at round tables. Church leaders hope it will become a popular venue for weddings and other events.

Also, improvements have been made to offices and the library, including asbestos abatement. There’s a new choir room and a parlor for families. A new bell will be installed in the tower, the cross repainted and a new quarter-mile walking path will surround the 5 acre property.

In a recent edition of the church’s newsletter, Volland said the new St. Bede’s will be open to people and nature in every direction.

“That’s how open I want our church to feel inside and out,” she wrote. “Let’s always remember our oneness with creation and creatures, including people.” And she pleaded: “Let’s always remember the importance of fresh ideas swirling around. Too often churches are places of refuge from the world more than places of engagement with it. I pray St. Bede’s will always be the latter.”

In an email, she called the church’s founders “bold and wise” and said, “Now we have the opportunity to take the good work they have done, and repair and improve it.”