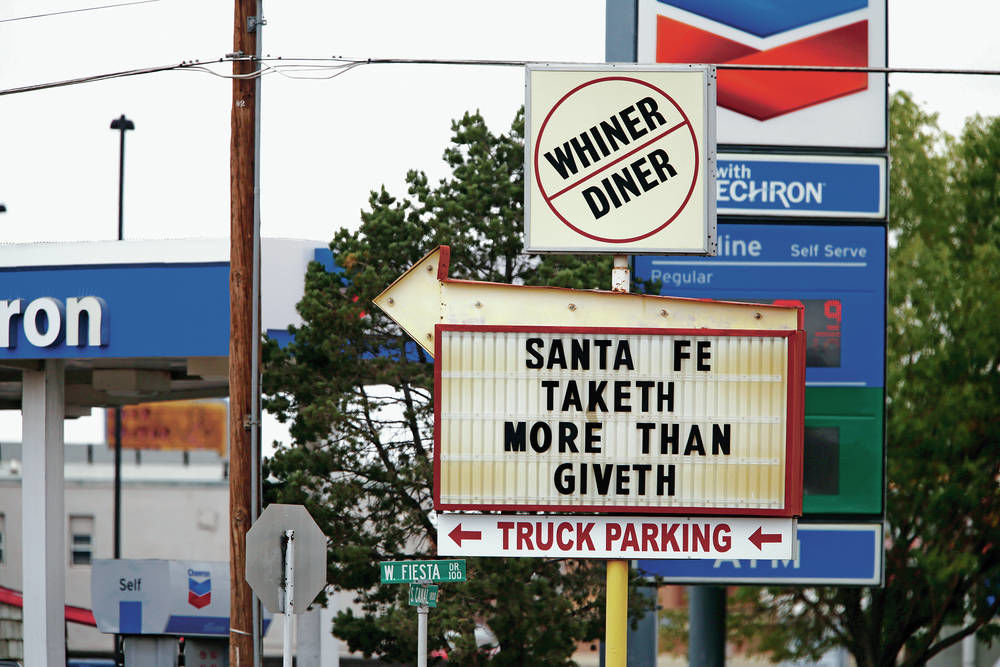 A sign at the No Whiner Diner in Carlsbad earlier this month shares a sentiment common among people in southeast New Mexico. Luis Sánchez Saturno/The New Mexican 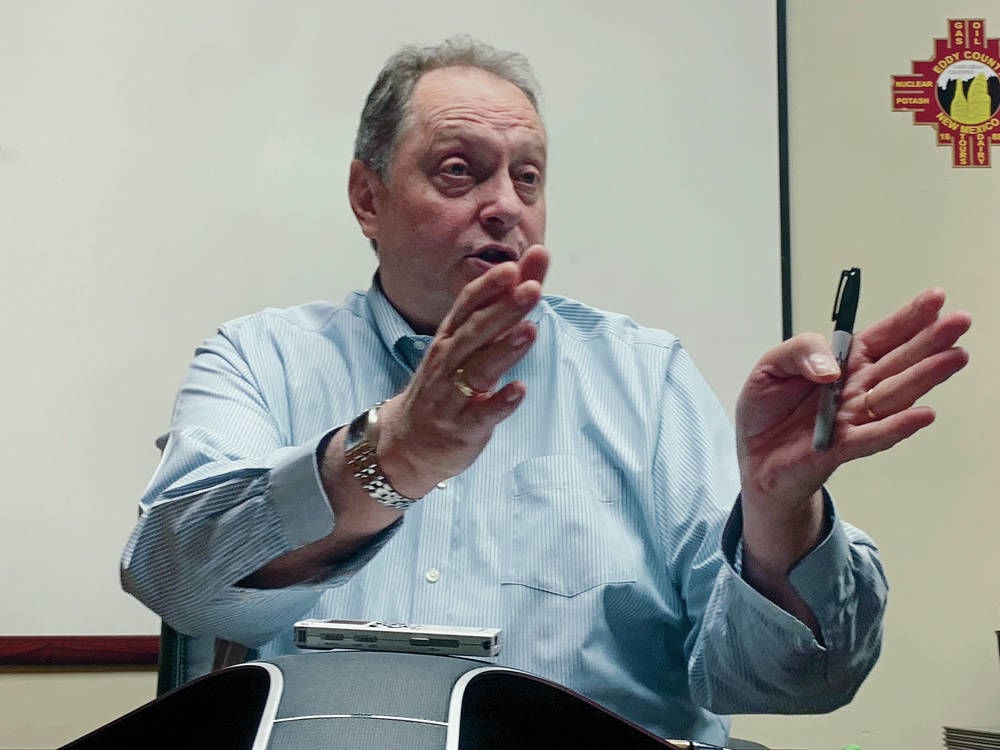 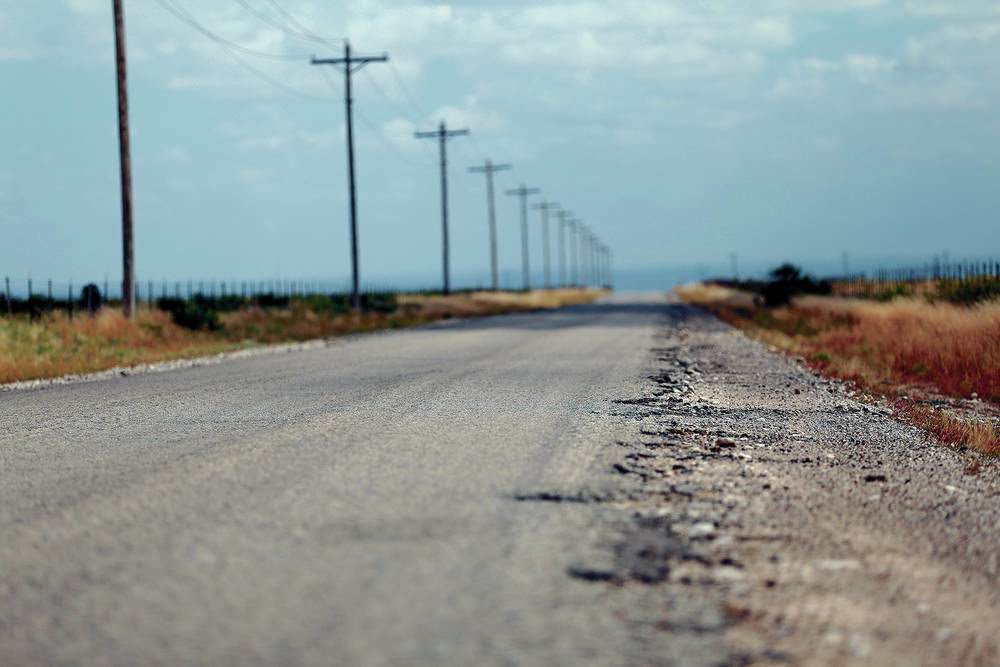 Bounds Road in Eddy County is not designed to handle heavy truck traffic, so the shoulders are getting damaged when trucks pass each other. Luis Sánchez Saturno/The New Mexican

A sign at the No Whiner Diner in Carlsbad earlier this month shares a sentiment common among people in southeast New Mexico. Luis Sánchez Saturno/The New Mexican

Bounds Road in Eddy County is not designed to handle heavy truck traffic, so the shoulders are getting damaged when trucks pass each other. Luis Sánchez Saturno/The New Mexican

That’s the message a Carlsbad diner has been displaying on its sign for all the city’s Canal Street thoroughfare to see.

It’s a sentiment often expressed in southeastern New Mexico among residents and elected officials alike. And it’s more pronounced now that the oil and gas industry, which is largely concentrated in Eddy and Lea counties, accounts for a whopping 36 percent of state revenue.

Local officials and lawmakers from this region say that while the state is enjoying an unprecedented influx of money driven largely by their counties, officials up north aren’t doing enough to fix dire infrastructure problems here.

“There’s a great deal of frustration that Santa Fe doesn’t have better ears about these problems,” said Rep. Cathrynn Brown, R-Carlsbad. “The reinvestment is not adequate.”

The biggest gripe has to do with roads. As New Mexico’s oil output has nearly quadrupled over the past eight years amid a production spike in the Permian Basin, highways in Eddy and Lea counties — overrun with heavy trucks — have deteriorated as the big rigs speed to and from the oil fields.

Many of the roads weren’t designed for semis. Add to that the traffic congestion and some reckless driving, and the area is seeing an increase in crashes and fatalities on highways like U.S. 285, which runs right through a booming portion of the Permian between Carlsbad and the Texas state line.

“Not only have we shed sweat and tears down here, we’ve shed blood,” said Eddy County Commissioner Ernie Carlson . “Every one of our workers out in the oil field is at risk, and just traveling up and down our highways is a major safety hazard. That doesn’t impact the people in Northern New Mexico, but it impacts families and friends and brothers and sisters here in southeast New Mexico.”

It’s not just the bigger highways. Many rural county roads in the area, which were often built to access ranches, are chewed up from overuse.

Eddy County officials said in a recent interview that they believe the county should be receiving a greater portion of severance tax revenue from oil and gas production because their county is contributing so much of that income.

“I think government should be run like a business,” said Carlson. “If you have a division that’s making you the most, where are you going to invest the most money? In that division.

“You want that division to prosper,” he continued, “because it makes you the money so you can develop new products, expand and diversify. Eddy and Lea counties are that division.”

The sentiment is palpable among locals, too.

“It’s an overall feeling,” said Ray Richardson, owner of the No Whiner Diner, the restaurant that put up the sign about Santa Fe. “It would be nice to be recognized as the booming part of New Mexico and maybe they could throw a bone here.”

Richardson said people from Santa Fe and Albuquerque have called his restaurant to say “nasty things” about the sign.

“The governor is going to sponsor all sorts of programs because of oil revenue,” he added. “But when it comes to fixing the basic things like the roads, they really don’t come through much.”

The Department of Transportation is drawing on the state’s record revenue as well as an increase in the excise tax on motor vehicles to invest more than $200 million in highways in southeast New Mexico over a two-year period — a huge jump from the historical average of $20 to $30 million per year in funding for roads in that part of the state, according to Secretary Michael Sandoval.

“We think it’s the right place to send the money,” Sandoval said. “That’s more than they’ve ever had.”

The department also pulled $60 million in extra funds from its budget for a project to improve N.M. 128, which helps connect Carlsbad to Jal. That effort still needs another $140 million in funding.

As for county roads, Sandoval pointed out House Bill 694, signed into law in April, created a new local transportation fund that pays for 95 percent of local road projects, with cities and counties needing to pay only the remaining 5 percent.

Sandoval said the discussions he’s had with officials in Eddy and Lea have been “positive,” and added he understands the local sentiment about the need for more funding.

“We all need to be honest about the fact that the reason we had such a big surplus last year and this year is because of oil and gas,” he said. “And so they feel like, ‘Our area of the state is giving you hundreds of millions of dollars and we should get a lot more of it back.’ ”

As for severance taxes and royalties, it’s set in statute that the majority of that revenue goes to the state’s general fund and permanent funds, according to the Taxation and Revenue Department.

Eddy and Lea counties do receive back all the revenue generated from the “local option” portion of gross receipts taxes, which is the portion on top of what the state receives. Local option gross receipts revenue distributed to Eddy County and its municipalities rose 89 percent between fiscal years 2016 and 2019, the greatest increase of any county, according to Taxation and Revenue Department figures.

Eddy and its municipalities had the second-highest per capita distribution of that tax in the state last fiscal year, at $2,564.

The office of Gov. Michelle Lujan Grisham said it has “tremendous respect” for the contribution Eddy and Lea have made to overall revenue, allowing the state to give teachers raises, boost child protective services and increase investment in other services.

Stelnicki also said that infrastructure in that area, and others, was neglected by the state under former Gov. Susana Martinez, and the current administration is catching up. It also takes a lot of time to complete highway improvement projects, he added.

Roads weren’t the only complaint local officials had about the state. The Carlsbad school district said it hoped the Legislature could help address a housing shortage in the area that has driven up the cost of living and made it difficult to hire teachers.

Officials also said they were wary about recent energy initiatives from the governor, such as one to regulate methane emissions by oil and gas companies.

“Some of the initial comments when she came to office were pretty frightening if you’re in the oil and gas industry,” said Eddy County Manager Allen Davis, who was part of that industry until earlier this year. He was Chevron’s operations superintendent for the Delaware Basin portion of the Permian.

“In my words: ‘Those cowboys down there, they’re gonna toe the line now,’ ” Davis added.

Eddy officials said the county and the industry were also spooked by a bill introduced in the last legislative session to place a moratorium on issuing new hydraulic fracturing permits for oil and gas drilling. The bill was unsuccessful.

“Even though it didn’t pass, that sent a message that we’re not friendly to oil and gas,” Carlson said.

Stelnicki said neither the industry nor southeastern counties should feel threatened by the governor’s methane initiative because it is designed to help companies capture and profit from natural gas instead of flaring it and because officials are working with the industry to develop the regulations.

Still, local officials said they’re waiting to see the impact of the state’s policies and investments.