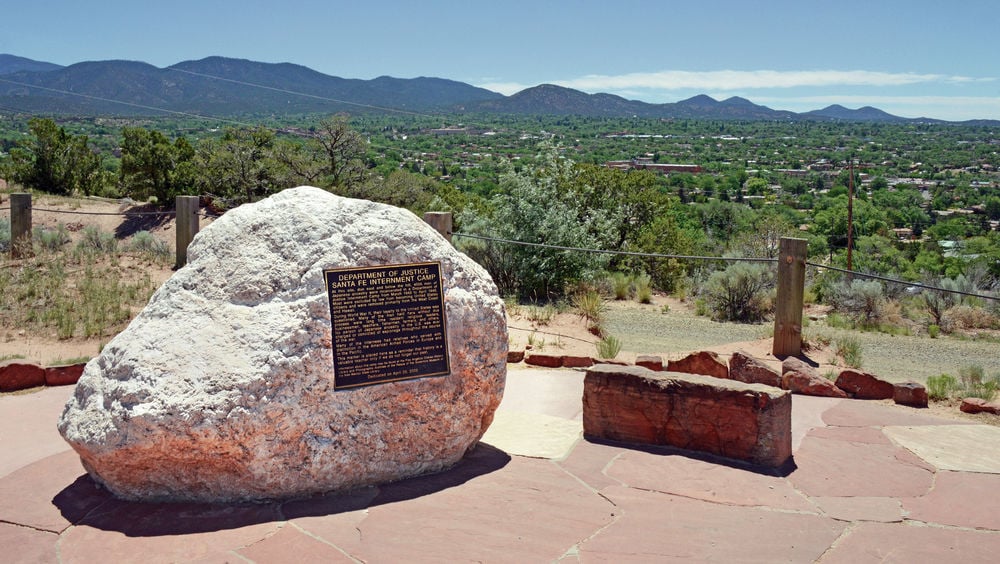 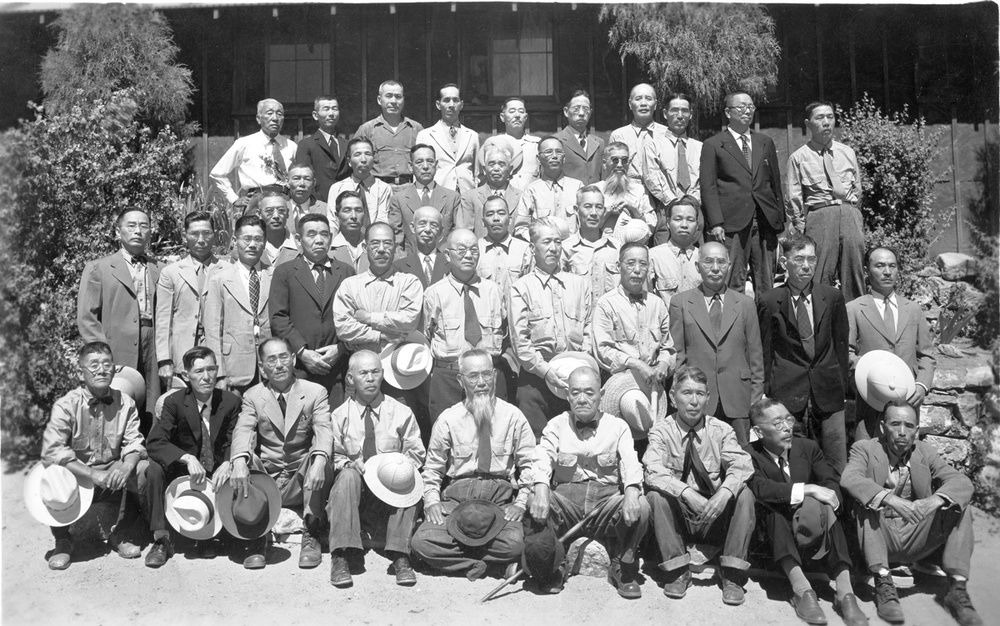 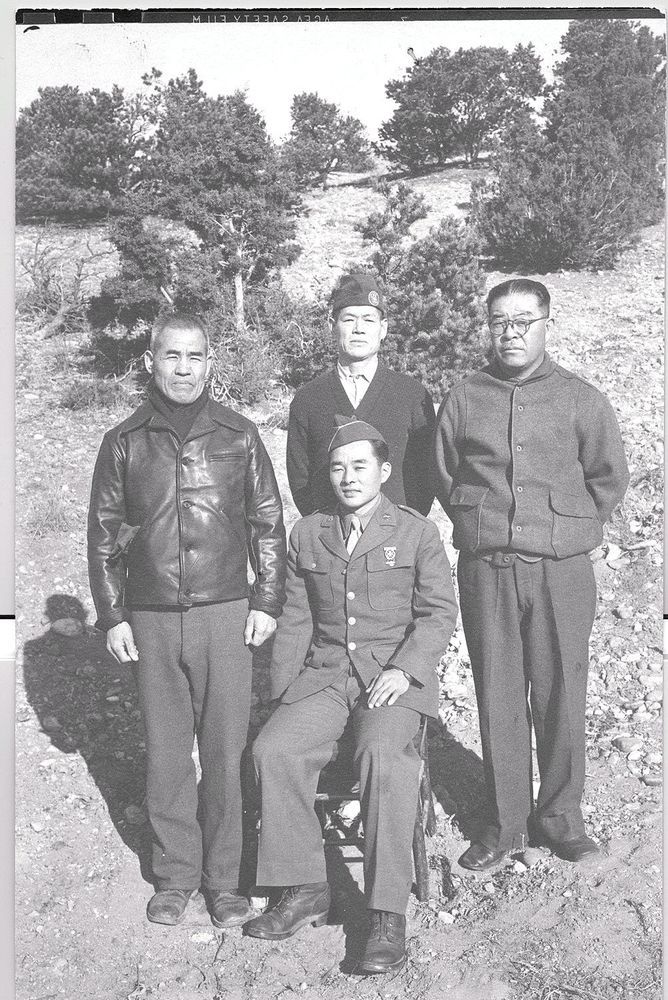 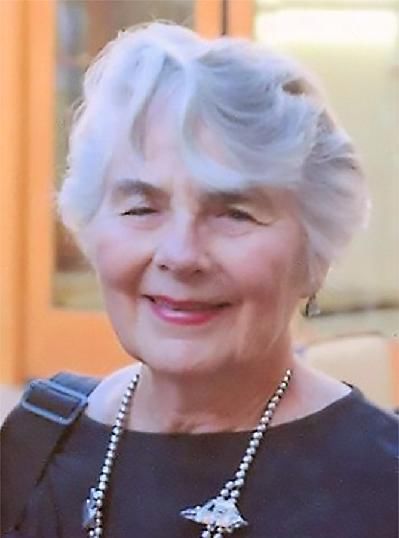 More than 4,500 people passed through the gates of the Japanese internment camp in Santa Fe from the time it opened in 1942 until 1946. Courtesy photo 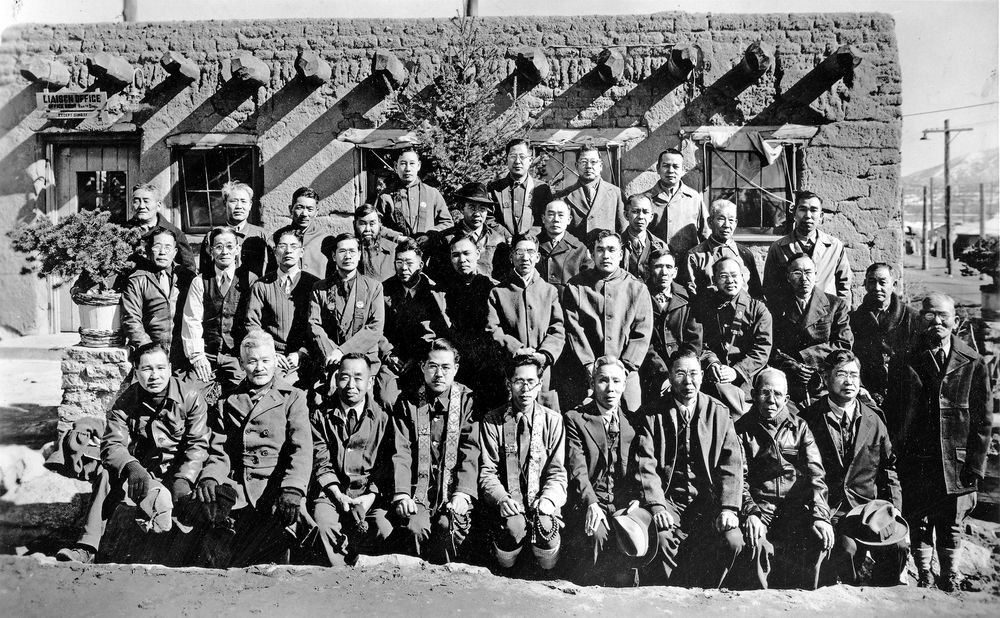 Inmates at the Japanese internment camp in Santa Fe, circa 1942. Negative No. PA-MU-233.2 Photo Archives New Mexico History Museum/Palace of the Governors

More than 4,500 people passed through the gates of the Japanese internment camp in Santa Fe from the time it opened in 1942 until 1946. Courtesy photo

Inmates at the Japanese internment camp in Santa Fe, circa 1942. Negative No. PA-MU-233.2 Photo Archives New Mexico History Museum/Palace of the Governors

During World War II, a secret community quietly developed in Los Alamos, its citizens working in secrecy to create a weapon that would put an end to the war.

Some 40 miles south of Los Alamos, yet another little-known community grew within the confines of barbed-wire gates and under the watchful eyes of guards: an internment camp for Japanese-Americans who, the government feared, might foment unrest and sabotage in the wake of the Japanese attack on Pearl Harbor on Dec. 7, 1941.

For historian and author Nancy Bartlit, there is something of a paradox in the idea that Santa Fe, gateway to Los Alamos’ secret city, was also home to men considered to be potential spies.

“I think it is the biggest irony that persons who were sent to the camp and who then became dangerous alien enemies by virtue of being in that interment camp, were brought in to live in proximity to the biggest secret of World War II,” she said.

Bartlit will talk about the camp, which opened 75 years ago, at 6 p.m. Tuesday, Feb. 28, at St. Francis Auditorium at the New Mexico Museum of Art. Her presentation, titled “The Santa Fe Japanese Internment Camp in the Shadow of Los Alamos 1942-1946,” is free and open to the public.

Given President Donald Trump’s recent reform of immigration policies — which include the rounding up of immigrants who are living in the country illegally — Bartlit feels the topic has contemporary relevance. She said that even before the attack on Pearl Harbor, which launched America into war against both Japan and Germany, the U.S. government was making plans to track down and imprison Japanese nationals as a precautionary national-security act.

“I think it could happen again,” she said. “I don’t know what is being done about ‘listing’ Muslims, but two or three years prior to Pearl Harbor the FBI and the Department of the Navy were already putting these Japanese-Americans on lists.

“I don’t know the situation in our current presidential administration, but there is a sense of fear.”

The Santa Fe internment camp was one of four such camps in the state of New Mexico during World War II. For visitors today, the only sign of the camp, which overlooked what is now Frank S. Ortiz Park in the Casa Solana neighborhood, is a stone monument created to commemorate the site in 2002.

Bartlit said some 120,000 Japanese-Americans were interned in camps sprinkled around the country. Early in 1942, the Department of Justice expanded a Civilian Conservation Corps camp in Santa Fe into one such holding center. The first of those men arrived sometime in February or March 1942, she said.

In the early days of its existence, about 800 men lived in the camp, though by the summer of 1945, some 2,000 men were in it. (A National Park Service history reports that German and Italian aliens also were held periodically at the camp.)

For the most part, the men were middle-aged and were considered intellectual leaders in their home communities. Many of them had sons who were fighting in the armed forces for America. Some of the internees, Bartlit said, had served with American forces during World War I.

Though physical mistreatment was uncommon at the Santa Fe camp, Bartlit said the residents suffered psychological, cultural and financial pain over the years. “We were at war with Japan. They understood that,” she said. “What was terribly, terribly cruel is that they were given no time to take care of their property, and they were limited in how much money they could have in their bank account, which in turn means they couldn’t pay off the mortgages on their homes, which means they [were] foreclosed on.

Though many Santa Feans, upon hearing the news of how Japanese soldiers treated American prisoners of war from New Mexico during the Bataan Death March, developed a lynch-mob mentality and once unsuccessfully stormed the gates of the camp seeking vengeance, Bartlit said for the most part the prisoners were left alone and that many people in town did not even know what was going on beyond the gates.

“The average citizen could not see the camp; only authorized personnel could enter it,” she said. “My guess is, it was pretty secret.”

The only other known outburst at the camp occurred in March 1945, when camp officials decided to relocate some of the more rebellious pro-Japanese inmates to another camp at Fort Stanton, N.M. When other inmates gathered to either protest the move or simply say good-bye (accounts vary), camp guards used tear gas to break up the gathering. Bartlit said one survivor of the camp later told her that the wind blew the tear gas back into the faces of the camp guards, much to the prisoners’ delight.

When the war with Japan ended in September 1945, government officials began shutting down the camps and releasing the internees. For reasons that are unclear, the Santa Fe camp remained open until April 1946.

To Bartlit, the story needs to be remembered.

“It’s an inhumane way to take care of our citizens,” she said. “People can use the story of what happened to Japanese-Americans to alert them to what possibility might be to treatment of Muslims and other immigrants today.”

What: Author and historian Nancy Bartlit speaks about “The Santa Fe Japanese Internment Camp in the Shadow of Los Alamos, 1942-1946”

This story has been amended to reflect the following correction: it originally said that nationwide about 12,000 Japanese Americans were rounded up and placed in internment camps. The actual number was 120,000.