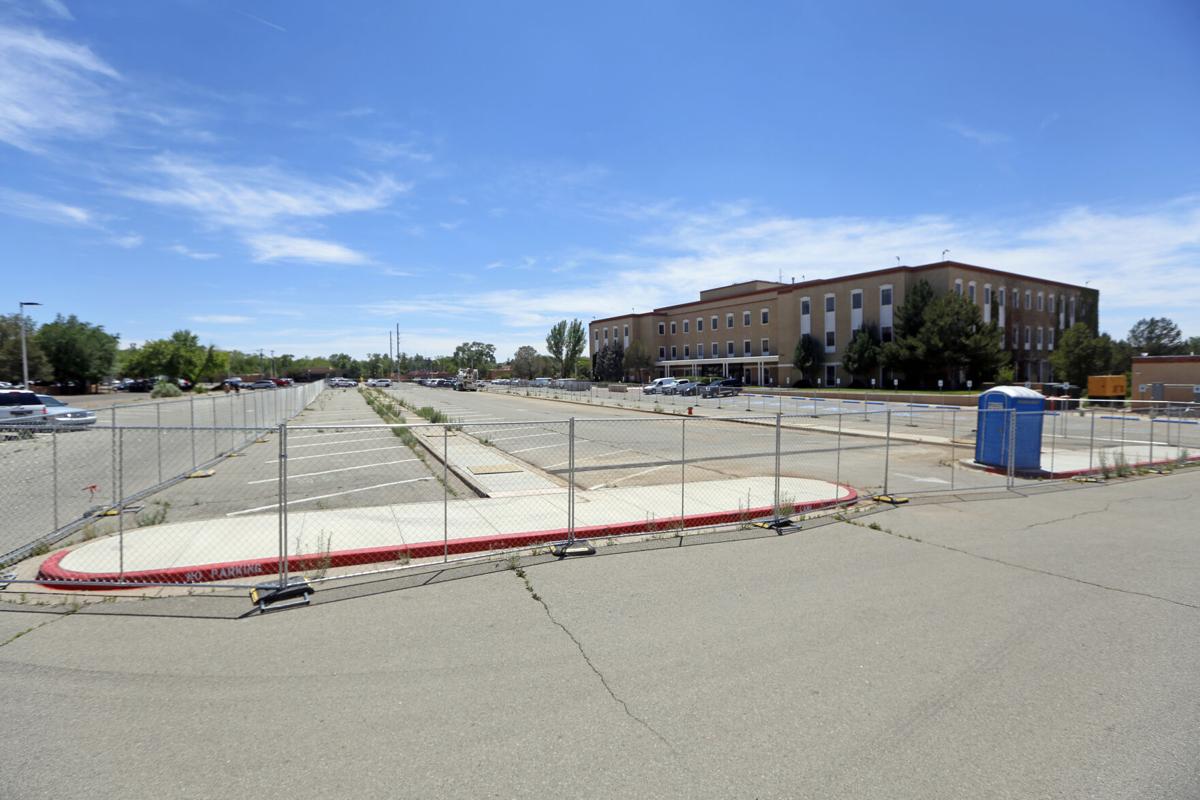 Plans to erect a solar carport in the PERA Building parking lot have been scrapped due to the discovery of a casket containing human remains. 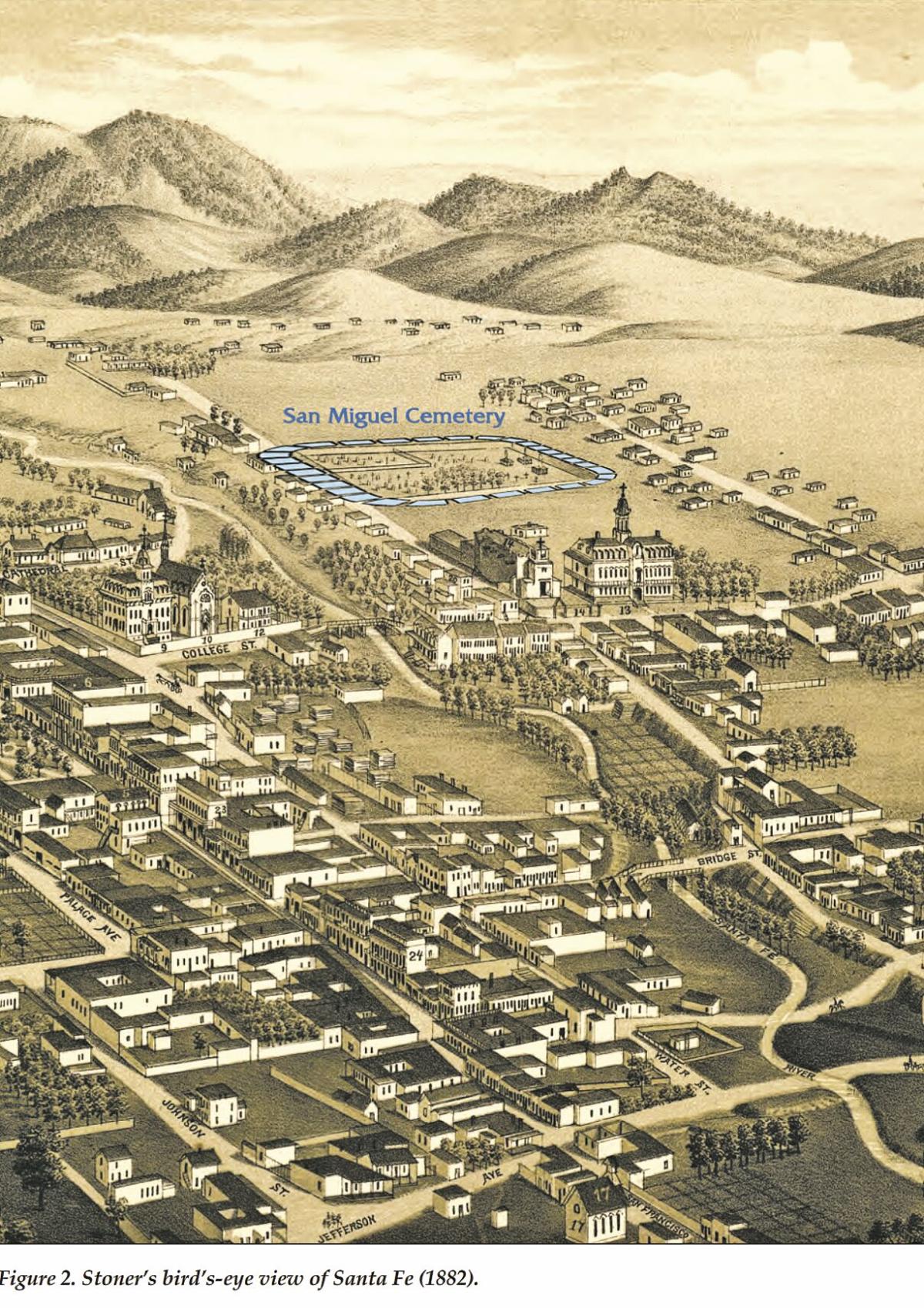 An illustration of the location of San Miguel Cemetery in 1882.

Plans to erect a solar carport in the PERA Building parking lot have been scrapped due to the discovery of a casket containing human remains.

An illustration of the location of San Miguel Cemetery in 1882.

State officials have ceased construction of a planned solar carport in the parking lot of the downtown PERA Building after workers on the site unearthed a piece of the past.

A casket. With human remains in it.

The state building, located in the 400 block of Old Santa Fe Trail, was constructed in the mid-1960s on the site of a section of the old San Miguel Cemetery.

“It is well known that there was a cemetery there somewhere,” said Thom Cole, spokesman for the state General Services Department, which is responsible for the carport project. “During construction we discovered a gravesite, a casket, and after consulting with the state office of archeology and our contractor, out of respect for any other deceased people on that property, we decided to abandon building a carport there.”

Work on the project began May 10; workers discovered the casket five days later, he said.

The state has since transferred the project to the Garrey Carruthers Building near Camino Carlos Rey and Cerrillos Road. Initially expected to cost $1.6 million at the PERA Building, the project move could cost the state “a few hundred thousand” more, Cole wrote in a follow-up email.

Eric Blinman, director of the state Office of Archaeological Studies, said General Services Department officials called his department May 15 to exhume the remains for an investigation.

“What the GSD did was the right thing [in stopping the project],” Blinman said Wednesday.

This is not the first time in recent history a construction project has unearthed the deceased. In February 2020, human remains were found at the construction site of La Secoya de El Castillo in downtown Santa Fe.

And just over 10 years ago, the Office of Archeological Studies was called to the PERA Building after a utility contractor installing a generator and subsurface lines found human skeletal remains.

A 2011 Office of Archeology Studies monitoring report on that incident said information about the San Miguel Cemetery was “difficult to obtain.” But that report said the area, located near San Miguel Mission, probably served as a site for burial remains dating to the 1700s and possibly up to 1914.

Blinman said the church cemetery “would have abutted De Vargas Street and extended to the south.”

Prior to construction of the PERA Building in 1966, “many of the graves were exhumed and relocated off site,” the 2011 report said. “However it is possible that isolated graves were missed or that disarticulated remains exist within and on the periphery of the former cemetery.”

That report includes information from David Snow, a New Mexico historian and archaeologist, regarding the 1966 excavation of human remains from the abandoned cemetery during the original construction project.

“According to Snow, one Native American burial was among the 13 or 14 burials exhumed from the Catholic cemetery,” the report says. “The bodies were wrapped in shrouds, and portions of wooden coffins were present. One individual had a wooden peg leg and was dressed in a colorful costume; an infant was buried between his legs.”

State Historian Rob Martinez said it was typical in New Mexico’s colonial period to bury people in close proximity to churches — and, in many cases, under the churches.

“And they didn’t use coffins,” he said.

The use of coffins in burials in the state began sometime in the 1850s, Martinez said.

The casket found at the site probably dates back no further than that time period, he added.

“If they look at the remains inside, and what kind of clothing they were wearing — if it’s preserved — they might get a much better idea of the time period,” Martinez said.

Meanwhile, the state has two other solar carport projects progressing — one at the Wendell Chino Building and one at the Harold Runnels Building, both located on St. Francis Drive. The Chino project costs about $700,000 and the Runnels project costs $6.9 million, Cole said.

It’s unclear if there are any undiscovered cemeteries under those properties.

The PERA parking lot has been a big eyesore in the heart of town for ½ a century, along with the power lines on Paseo de Peralta in the background of the photo. Why make it worse?

“Initially expected to cost $1.6 million at the PERA Building, the project move could cost the state ‘a few hundred thousand’ more . . . Meanwhile, the state has two other solar carport projects progressing . . . The Chino project costs about $700,000 and the Runnels project costs $6.9 million . . . ”

Seriously? How long until any of these projects return the investment?

A $6.9 million dollar carport?!! Nothin but the best for NM's state employees.

In case you missed it, it's completely covered in solar PV panels, and will generate a significant amount of electricity.

"When the project is completed later this year, it is expected to reduce electric bills for the buildings by 50 percent and save the state more than $1 million annually.

Total cost of the carports at the Montoya, Simms, PERA and Chino buildings is $9.7 million."