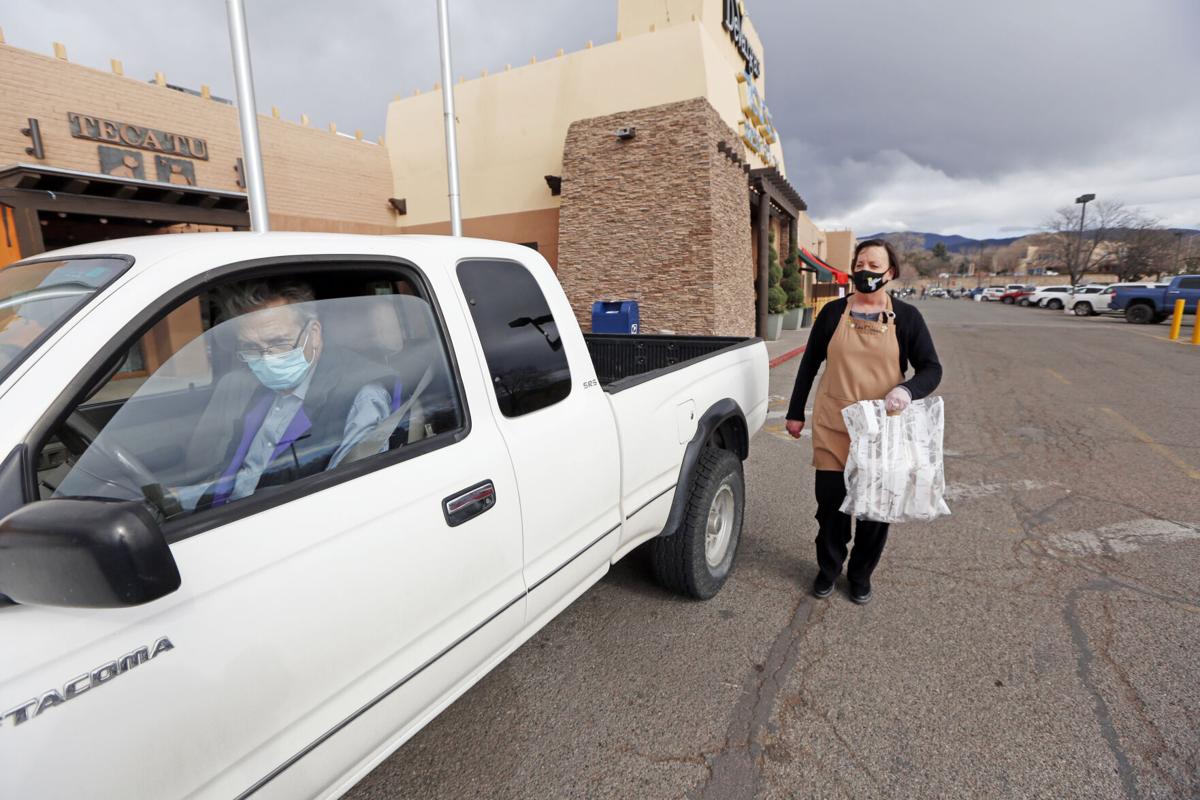 Molly Watt, with Las Cosas Kitchen Shoppe, brings out a pick-up order for Cary Stickney of Santa Fe at the DeVargas Center on Friday. The mall is closed to customers, but shops can bring orders to the curb. 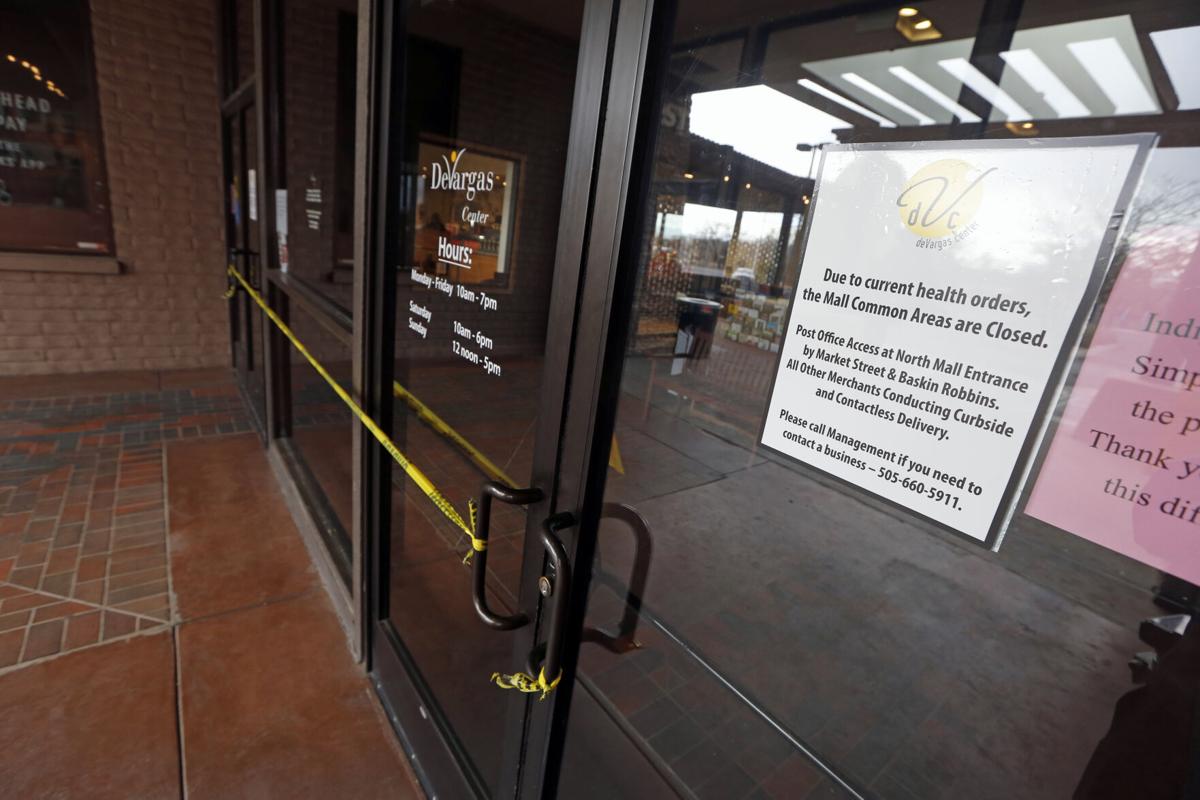 A sign at the entrance to DeVargas Center on Friday announces it is closed to shoppers. Stores are offering curbside service.

Molly Watt, with Las Cosas Kitchen Shoppe, brings out a pick-up order for Cary Stickney of Santa Fe at the DeVargas Center on Friday. The mall is closed to customers, but shops can bring orders to the curb.

A sign at the entrance to DeVargas Center on Friday announces it is closed to shoppers. Stores are offering curbside service.

Mike Walker said his Santa Fe kitchen goods store usually does 35 percent of its business between Nov. 14 and Dec. 24.

The rush starts before Thanksgiving, when Las Cosas Kitchen Shoppe in DeVargas Center begins selling specialty items, such as basting needles, to people gearing up for holiday feasts.

Once they’re in the store, Walker said, holiday shoppers usually pick up seasonal goodies such as imported shortbread cookies or Christmas crackers — the kind that go pop.

This year, that’s not happening.

Black Friday, which long has been one of the busiest holiday gift-buying days of the year, drawing hordes of post-Thanksgiving shoppers seeking deals, was quiet and gray. Shopping mall parking lots, normally packed with cars for the occasion, stood nearly empty.

The state’s two-week lockdown to help stem the spread of the surging coronavirus forced most businesses to close their doors to customers, though many were offering curbside pickup.

Walker, who has owned and operated Las Cosas with his wife, Karen Walker, for 22 years, was in his store Friday, scouring the shelves for goods and packing up orders to run outside to customers.

With the state’s emergency orders prohibiting most in-person shopping, at least through Dec. 2, local businesses have had to adjust their staffing, their inventory and their expectations about how much money they can bring in between now and the end of the year.

“Our sales are probably down 70 to 75 percent below what we normally do this time of year,” Mike Walker said.

“It creates a whole different routine for the staff and for us,” he added. “Normally we would hire Christmas help, but this year we are not.”

Walker said Las Cosas had begun to put more emphasis on its website before the pandemic, but the shift from corner specialty shop to a competitor in the online market isn’t a natural one for the store’s product mix.

It’s hard, he said, for the store to be competitive with Walmart or Williams-Sonoma for an item such as a 10-inch frying pan.

“We don’t have the millions it takes to do that,” he said. “We have a nice website. It shops well.”

But, he said, “we’re used to people coming in and asking us questions. We are a physical business.”

If there is a silver lining, Walker said, it’s that more people are cooking for themselves, and they need quality tools.

“Coffee makers have been a big thing,” he said. “And people are drinking wine, too.”

Rick Griego and his wife, Janice Griego, owners of The Shop: A Christmas Store on Palace Avenue downtown, were too busy packing orders and taking photographs of toilet paper-themed ornaments to send to a customer in Houston for a phone interview Friday morning.

But during an afternoon lull, Rick Griego said this year is unlike any other in the Christmas store’s 44-year history.

“Our biggest day of the year is today,” he said. “I’m gonna say our business is about 10 percent of what we normally see on a Black Friday.

“I wish it was a normal Black Friday,” he added. “We’d be going crazy.”

He credited the store’s website, revamped last year, for what little business it has drawn.

“Curbside ordering has been doing really well, too,” he said.

Griego said it’s not just the cash register dinging or bells jingling as customers enter the shop that he misses.

“Seeing people on the streets starting to celebrate, coming in and out of the shops — it’s just the festiveness we are missing,” he said. “There are some people walking around, but not like normal. There is nowhere for them to shop, nowhere for them to walk into. It’s not anything like a normal day after Thanksgiving.”

The store carries sustainably produced baby goods with an emphasis on local vendors. Hyde said each item has its own story that she used to be able to share with shoppers as they browsed.

Now, she said, she wakes up every morning and picks a theme of items — books, wooden toys or New Mexico made, for example — to feature on social media and spends all day responding to messages from customers that come via multiple platforms, including Facebook, Instagram, email and phone.

“I walk around the store and take photos and send it to them. I write diatribes with every single image. … And having to type the story instead of just telling the story takes four or five times longer,” Hyde said. “And then they might say, ‘Do you have it in blue?’ ”

You have to respond to each customer right away, she said, before they move on to their next task.

“It’s very different, and it made me realize I could never work in front of a computer,” she said.

But Hyde said she’s come to accept and even embrace some of the changes.

“Home deliveries are my favorite part,” she said. “We wrap everything up and drive around Santa Fe. I feel like Santa Claus.”

The local shop owners didn’t complain about the hardships posed by the pandemic, and each expressed gratitude for loyal customers.

Griego said he counted himself blessed to have updated his website when he did.

Hyde said she’s brought to tears daily by the unexpected kindnesses of her customers.

But the store owners also expressed frustration with what they see as the disproportionate effect of the state’s public health restrictions on small businesses versus large national chain stores, and trepidation about what the future may bring.

Chocolate + Cashmere owner Haleigh Palmer said she closed her handmade knitwear and specialty chocolate shop — one of three she owns, including shops in Taos and Denver — before realizing she might be able to keep her doors open under provisions in New Mexico’s public health order for businesses that primarily sell food.

“The guidelines aren’t clear,” she said. “I feel like winter hats are essential.”

Still, Palmer said, “I have no interest in hurting my employees or putting anyone in a situation where they could die or kill someone else. … I guess you can say we are riding out the storm this time, and hoping it won’t fully take us under.”

“The governor has to do what she feels is best for our state,” he said. “That’s what’s important. So we don’t argue with it. We just try to get through.”

Las Cosas will survive, he said, but “if [the governor] keeps us closed through December, it’s going to be a really major impact.”

Grishy, crushing the NM economy one business at a time.