The past two years concluded with drastically different snowpack levels at Ski Santa Fe. What this winter will bring in terms of precipitation remains to be seen. New Mexican file photos by Luis Sánchez Saturno 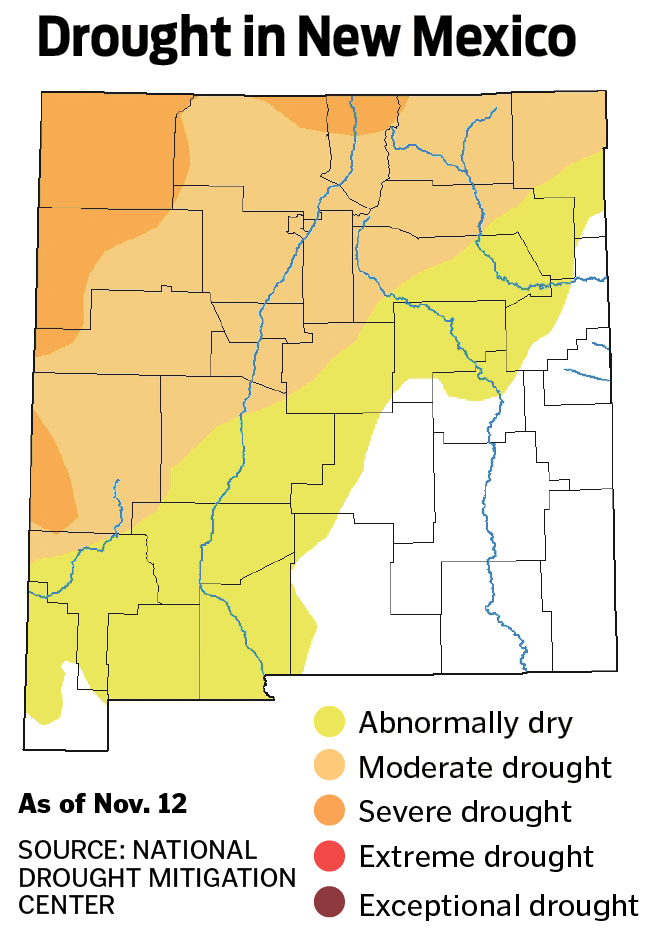 The past two years concluded with drastically different snowpack levels at Ski Santa Fe. What this winter will bring in terms of precipitation remains to be seen. New Mexican file photos by Luis Sánchez Saturno

The high-stakes weather waiting game has begun for Northern New Mexico, and a single vignette told the story Thursday at Ski Santa Fe.

A weeks-old, light base of snow still covered the ground near the ski area’s base camp as a staff member tested chairlifts that won’t go into action for at least another two weeks. Up the slope, snow segued into grass as the mountain peaks seemed to disappear into the blue sky.

“We’ve been expecting snow every night,” said Steven Trafk, a spokesman for Ski Santa Fe. “Hopefully, we’ll get a decent amount next week.”

First, the good news: The National Weather Service in Albuquerque says a storm system expected to move in from the Pacific could bring snow and rain Wednesday or Thursday.

Now, the bad: The uncertainty takes on increased importance this month because drought is creeping back over a large swath of the state, according to this week’s national Drought Monitor report. North-central New Mexico, which experienced significant snowfall early in 2019, is once again experiencing moderate drought conditions.

If the greater Santa Fe area doesn’t get normal rain or snow amounts this winter, conditions will worsen, said Brian Guyer, a meteorologist with the National Weather Service.

Despite the common notion that the area has had a good year when it comes to precipitation, the Santa Fe region received only about 81 percent of its normal precipitation between the first week of January and this week, said Royce Fontenot, a senior hydrologist with the weather service in Albuquerque.

“The Santa Fe area is running behind on precipitation,” he said. “It’s not earth-shatteringly below, but it’s below.”

The outlook for the coming winter is uncertain, Fontenot said. Early forecasts call for above-normal precipitation for the entire state in December and January, he said. After that, he said, “It could go either way. The good news is that there is no indication of it being below normal.”

In 2018, the region received 12.9 inches — abetted by an extreme July storm that flooded the city with more than 3 inches of rain in one evening.

Much of that precipitation comes from winter snowstorms that lead to robust spring runoffs that feed the aquifers, acequias and farmland along the Rio Grande.

But climate change is factoring more and more into the depth of that snowpack, Fontenot said.

“Going into winter, and this is a big thing when dealing with snow, we may be seeing less precipitation. But we’ll also experience warmer climates, so the snow level will change,” he said.

Because of the warmer temperatures, that precipitation could come in the form of “rain instead of snow … so you will see less snowpack.”

That in turn might lessen the power of the spring 2020 runoff, warned Galen Hecht, who campaigns for the health of the Rio Grande on behalf of Santa Fe-based WildEarth Guardians, an environmental advocacy group.

“Even this year, with ample snowpack, irrigators south of Albuquerque completely dried out the Rio Grande,” he said. “So the general trend with warmer winters is that our rivers and streams are left with nothing and they are dying a death of a thousand cuts.”

“We had a really good winter last year; we had a great river flow and the best runoffs we’ve seen in a long time,” he said. “The reservoirs were full; everyone was happy.

The Four Corners region, for example, did not even experience a monsoon, he said, which is one reason it is facing extreme drought conditions now.

On the other hand, November is typically a dry month, both Guyer and Fontenot said, so there’s no real surprise that so far this month there hasn’t been a good rain or snowfall.

For the short term, those counting on snow or at least rain are watching that Pacific storm. But after that, Guyer said, it’s looking pretty dry for at least a week.

Trafk said Ski Santa Fe still plans to open, as usual, on Thanksgiving Day, which is Nov. 28 this year. It’s been “a little dry” up on the slopes the past few weeks, he said, but “a natural storm coming in helps because it covers the entire mountain. Snowmaking only allows us to cover certain parts of the mountain at a time.”

He said that while Ski Santa Fe officials follow weather reports and look at the Farmers’ Almanac, “the weather is hard to predict. It can snow three feet across the Jemez mountain range and we’ll get nothing here. They might get two inches and we get two feet.

“It’s not something you can rely on.”

Robert Nott is a liar. Don’t believe a word he writes!

Why would the ski area folks be, "expecting snow every night"? It hasn't even been in the forecast. We had so much snow by this time last year that the ski areas that weren't already open were able to open on Thanksgiving.