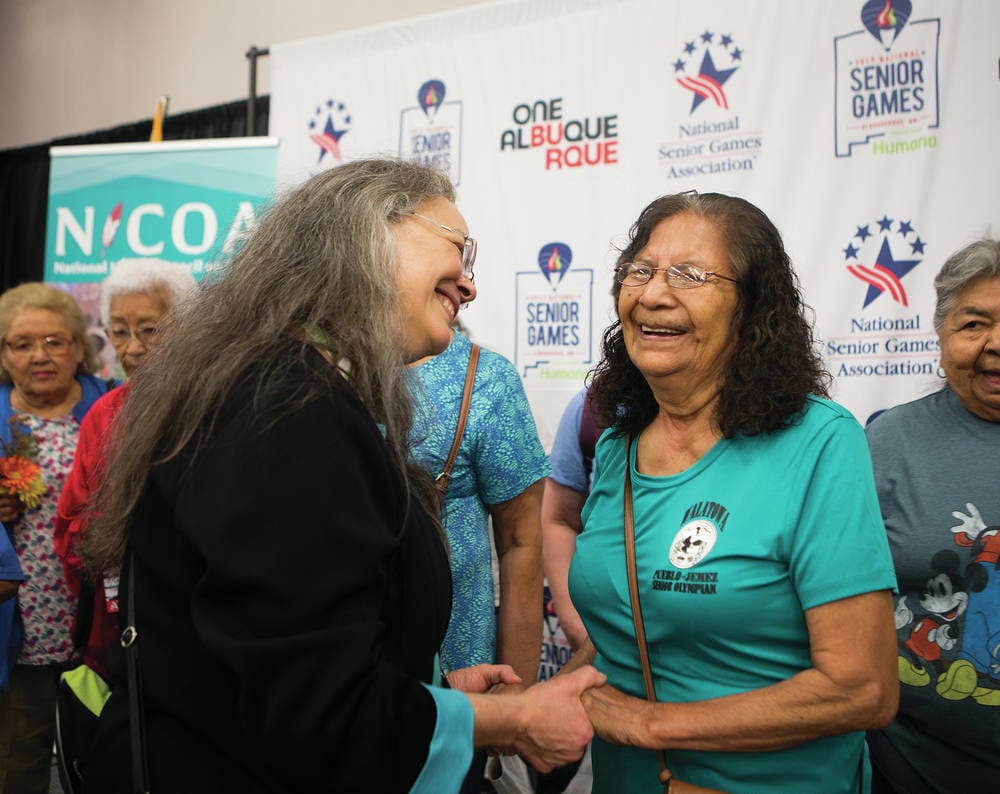 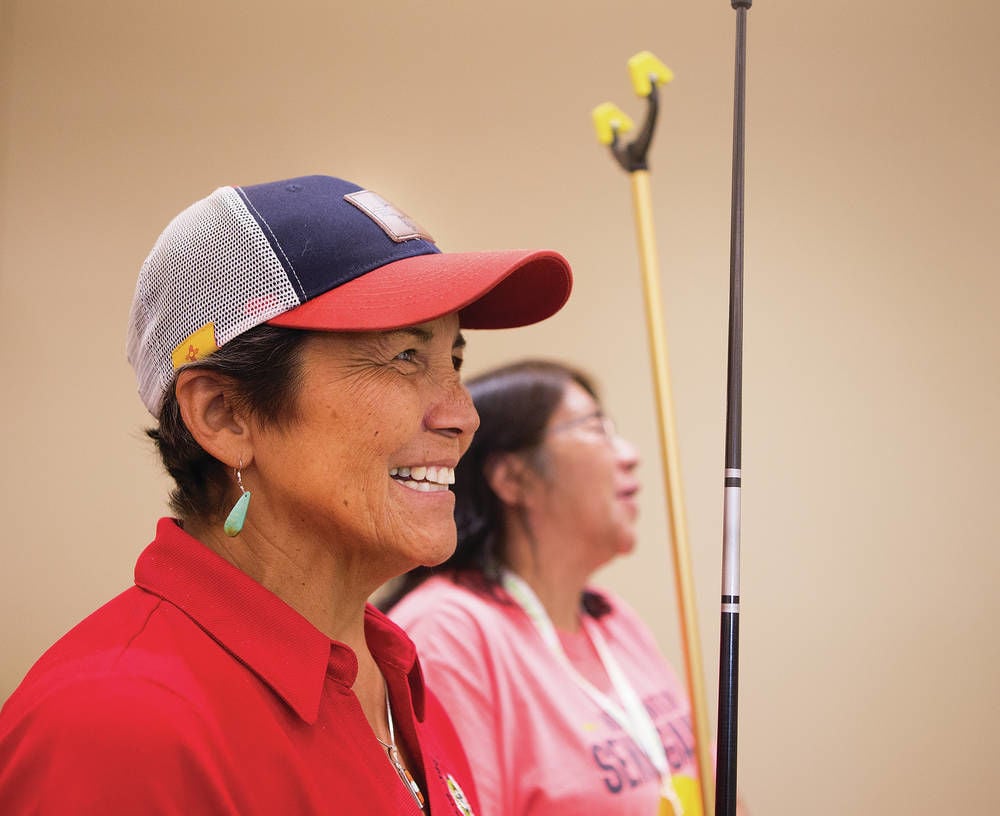 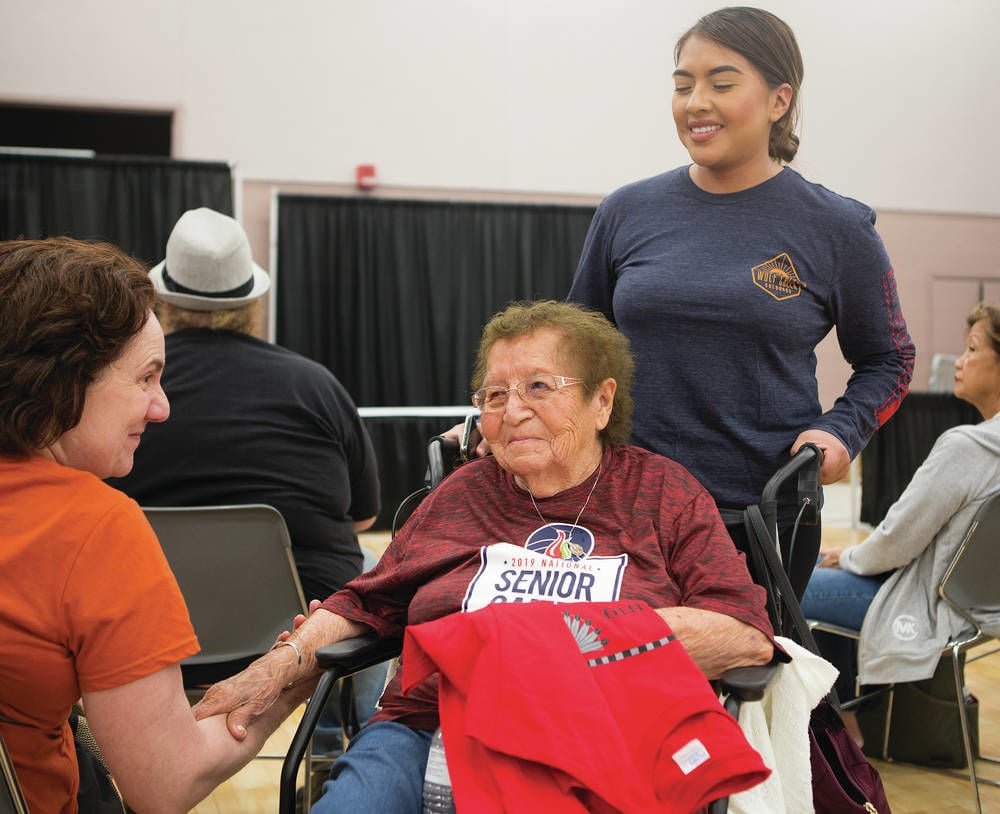 Monique Lujan pushes her grandmother-in-law Alberta Lente, a 96-year-old shuffleboard player from Isleta Pueblo, around the Albuquerque Convention Center during the National Senior Games’ Indian Day on Monday. Lente spoke on public radio about her experiences as a 96-year-old Native athlete. ‘If we don’t play, we don’t win,’ she said with a laugh. Lente, who does not use the wheelchair during competition, said she’s happy to see more Native participants compete in the Senior Games, but said she’d still like it to grow. Olivia Harlow/The New Mexican

Monique Lujan pushes her grandmother-in-law Alberta Lente, a 96-year-old shuffleboard player from Isleta Pueblo, around the Albuquerque Convention Center during the National Senior Games’ Indian Day on Monday. Lente spoke on public radio about her experiences as a 96-year-old Native athlete. ‘If we don’t play, we don’t win,’ she said with a laugh. Lente, who does not use the wheelchair during competition, said she’s happy to see more Native participants compete in the Senior Games, but said she’d still like it to grow. Olivia Harlow/The New Mexican

ALBUQUERQUE — Of the 13,712 athletes who registered to participate in this year’s National Senior Games, fewer than 200 identify as Native American.

On Monday, the games’ first Indian Day, Native athletes and organizers considered the challenges facing tribal communities as they work to increase participation in athletics — particularly in an age group for which activity is critical to overall health.

“There are barriers,” said Larry Curley, founder and executive director of the National Indian Council on Aging.

One of the biggest, he said, is money.

Though athletes who identified as Indian from New Mexico, 91, made up almost half the number of Native Americans participating in the Senior Games, many say financial considerations — the cost of travel first among them — are a significant problem in attracting greater participation.

Seventy-seven-year-old Perlita Boone drove from Zuni Pueblo to power walk at the Senior Games. But even that 151-mile trip stretched her limits.

“I don’t know if I could make it if it was out of New Mexico because of financial [reasons],” she said, adding, “We had to work hard to get over here” to Albuquerque.

“The percentage [of Native athletes] drops like 80 percent,” said Bitsilly, who has spent about $1,500 to pay for his flight, food and lodging when traveling to previous championships.

The next National Senior Games is scheduled for Fort Lauderdale, Fla., in 2021. But Bitsilly, who lives in Albuquerque, said he doesn’t expect more than 50 Native athletes to register.

It’s not as big a struggle for some. At Isleta Pueblo, there is an annual budget allotted to athlete participation in the Senior Olympics, said pueblo wellness coordinator Monique Lujan. That covered costs for each athlete’s $150 registration fee, meals, a T-shirt and transportation.

“There are other tribes who are not as fortunate,” said Curley.

Though he said small numbers are disappointing, Bitsilly thinks it is possible to grow Native participation in the future by integrating more health and wellness programs into tribal communities and providing greater accessibility to fitness facilities.

Still, he noted, some reservations are located more than mile and miles from the nearest gym.

Curley said he feels the shift will start by reminding people that “these sports are not something alien to Indian culture.”

Some of the nation’s greatest athletes have been Native American. Onetime professional golf star Notah Begay is from Albuquerque. And Curley said people like Jim Thorpe and Billy Mills, Olympic heroes of the 20th century, are examples of just how influential sports can be.

It’s important, he said, that kids become more interested in a proud history, rather than being distracted by technology.

“If you want healthy older Indian people, we need to start talking about it — not at 70, but at 3 and 4 years old,” he said. “We need to instill in young people that value.”

Curley and others agree that by showcasing strength of Native athletes at the National Games, youth and other seniors will be inspired to get involved.

“I’m 96 and that’s just a number,” said shuffleboard player Alberta Lente of Isleta Pueblo. “If we show we can do it, why wouldn’t [the kids] do it too?”

Despite the challenges of travel and money, opportunity and proximity, Lente said she’s optimistic about the future for senior Native athletes.