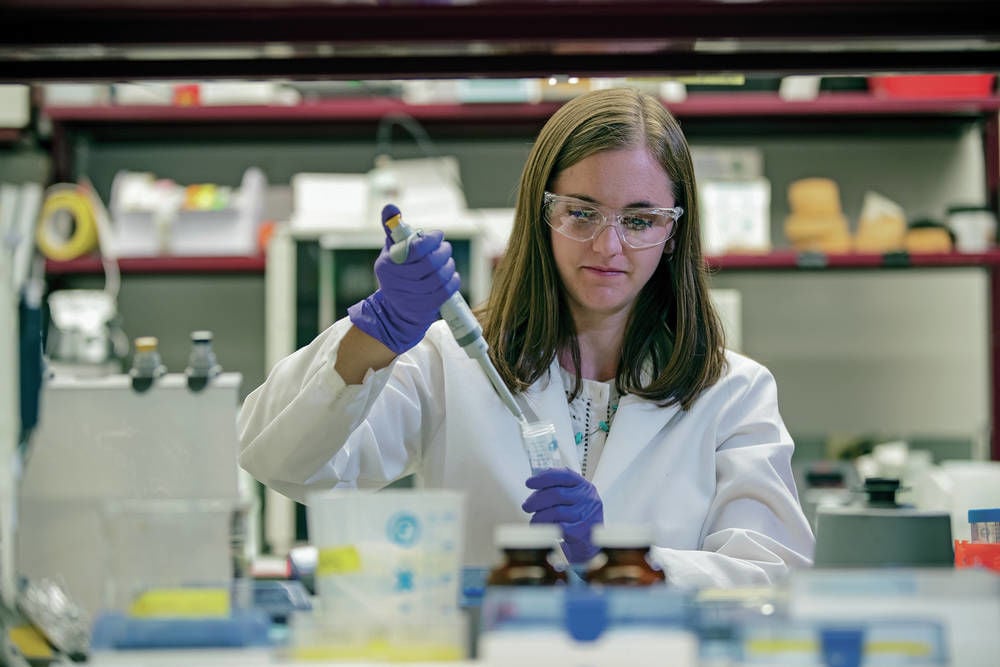 Stacy Copp, a physicist who researches the field of fluorescence microscopy, is funded by grants from Los Alamos National Laboratory and the personal care company L’Oréal. Courtesy of L’Oréal USA 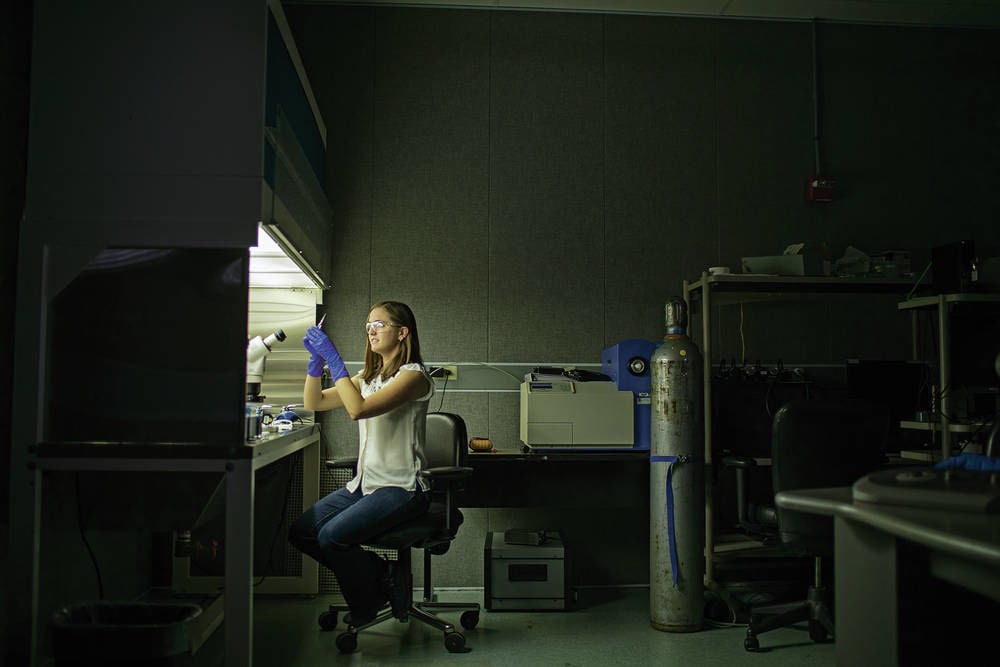 Stacy Copp’s work focuses on incredibly small, fluorescent particles and how they can be used to safely illuminate and track things on a nanoscale. Courtesy of L’Oréal USA

Stacy Copp, a physicist who researches the field of fluorescence microscopy, is funded by grants from Los Alamos National Laboratory and the personal care company L’Oréal. Courtesy of L’Oréal USA

Stacy Copp’s work focuses on incredibly small, fluorescent particles and how they can be used to safely illuminate and track things on a nanoscale. Courtesy of L’Oréal USA

ALBUQUERQUE — In the depths of the ocean, the billowy body of a squid has evolved to glow against the backdrop of the water. It’s a skeletal constellation, flashing colors that range from neon bright to a murky white.

It was this strange biology of the sea creature — how its very cells are able to manipulate light — that inspired Los Alamos National Laboratory physicist Stacy Copp.

“I thought, ‘Wow, if we could do that, imagine all the kinds of things we could create,’ ” Copp said. “Science you can see is really exciting for me.”

Copp’s passion has been rewarded recently. She has been able to research the field of fluorescence microscopy through two concurrent funding sources — a two-year fellowship funded by LANL and a recent $60,000 grant by personal care company L’Oréal that pays for her research and lab materials for the year.

The grant enables her, as an early career scientist, to independently shape her own research.

It’s an important time, she said. The “postdoctorate gap” is when many women tend to disappear from science, particularly in physics. The L’Oréal USA For Women in Science fellowship, which so far has been awarded to 75 women over 15 years, is an effort to increase the number of women who are employed in science, math or engineering fields.

Copp, 29, recalled that as she neared the completion of her bachelor’s degree at the University of Arizona, the American Physical Society, an association of physicists, came to the university and asked her class if they’d ever experienced sexism.

“Every young woman in my class, except me, raised their hand,” she remembered. “And I thought, ‘How have I not noticed this? How have I been excluded from this?’ That more than anything made me realize how important it is to advocate for racial minorities and women.”

Copp’s work for LANL focuses on incredibly small, fluorescent particles and how they can be used to safely illuminate and track things on a nanoscale. The goal is to learn how scientists might be able to assemble, tiny, light-reflecting particles into specific shapes “like molecular Legos,” she said.

It may sound abstract, but the application of this research could have groundbreaking implications for renewable energy and biomedicine.

“Suddenly,” she said, “you would be able to put things in really defined positions and build materials that right now we really can’t even dream about building because there is no way.”

Better organization of light-reflecting particles could be used to pull significantly more light from a source, thus vastly increasing energy efficiency, she said. And being able to safely track parts of a cell, or bacteria, could in turn help to better understand disease.

An Albuquerque native, Copp grew up hiking and backpacking in New Mexico with her parents, happy to chase lizards and bugs.

“I always knew I was really fascinated by life and the study of life,” said Copp.

Copp lives in Albuquerque with her husband and nearly 3-year-old toddler, with a second child due next month. She works at a lab inside the Center for Integrated Nanotechnology on the Sandia Labs campus. At a Starbucks just down the road from the lab and the National Museum on Nuclear Science and History, clusters of scientists — mostly men — dominated the coffee shop, pulling together tables and conversing with animation.

As part of the fellowship with L’Oréal, Copp works as a mentor for undergraduate students and has developed classroom science programs she hopes to bring to Albuquerque Public Schools. She said she particularly likes to work with nontraditional students, who may have transferred from a community college and are less likely to be given time in a research laboratory.

“Scientists should be bold and decide they are going to give everybody a chance on research,” she said. “It is really important that we bring a diverse set of voices to science, not only because equity is really important, but also there are incredible challenges that face our world, and if we don’t have a diverse set of minds thinking about them, we are really missing out.”

This story has been amended to reflect the following correction. A previous version of this story incorrectly spelled Stacy Copp's first name. It is spelled Scacy, not Stacey.