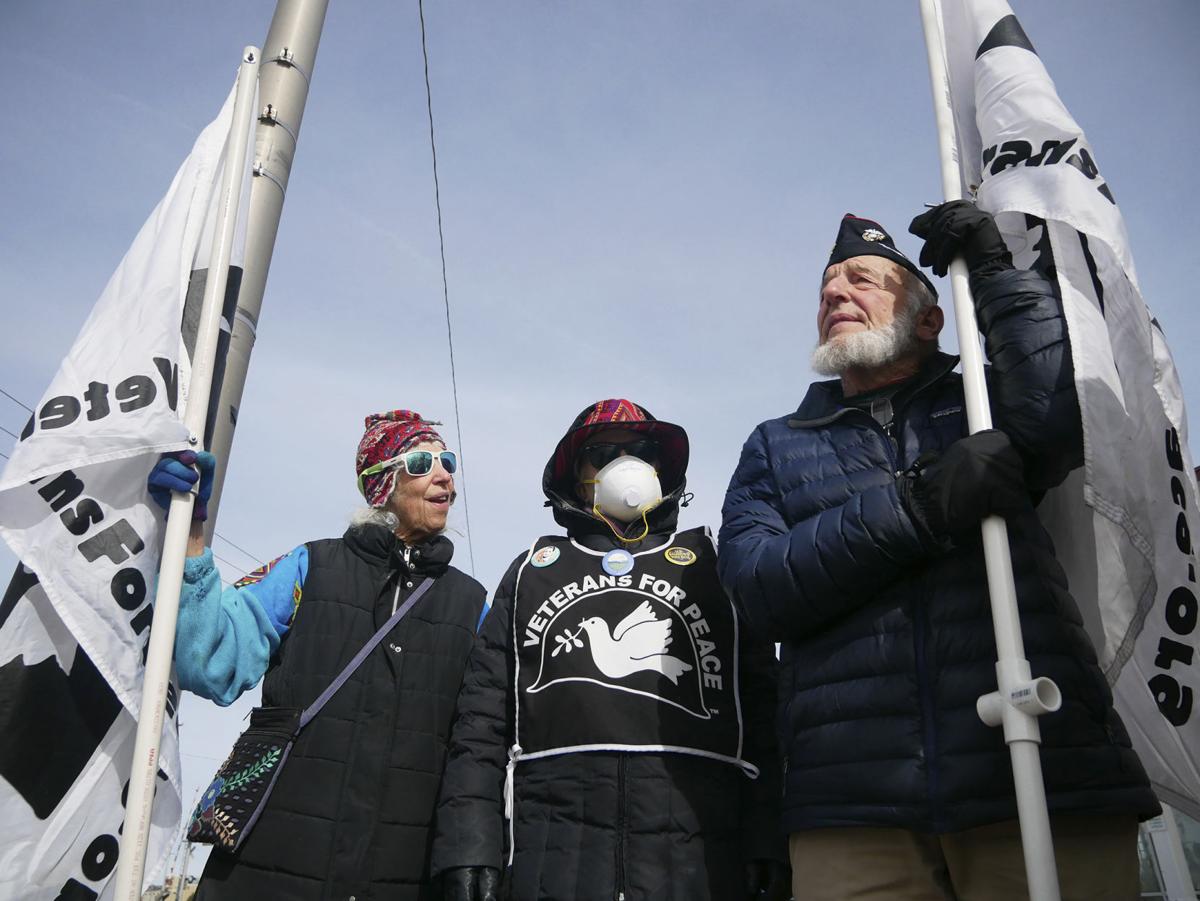 Ken Mayers, right, stands alongside Jasmine Stewart, left, and Dia Winograd at the corner of Cerrillos Road and St. Francis Drive on Friday in support of Veterans for Peace. Matt Dahlseid/The New Mexican 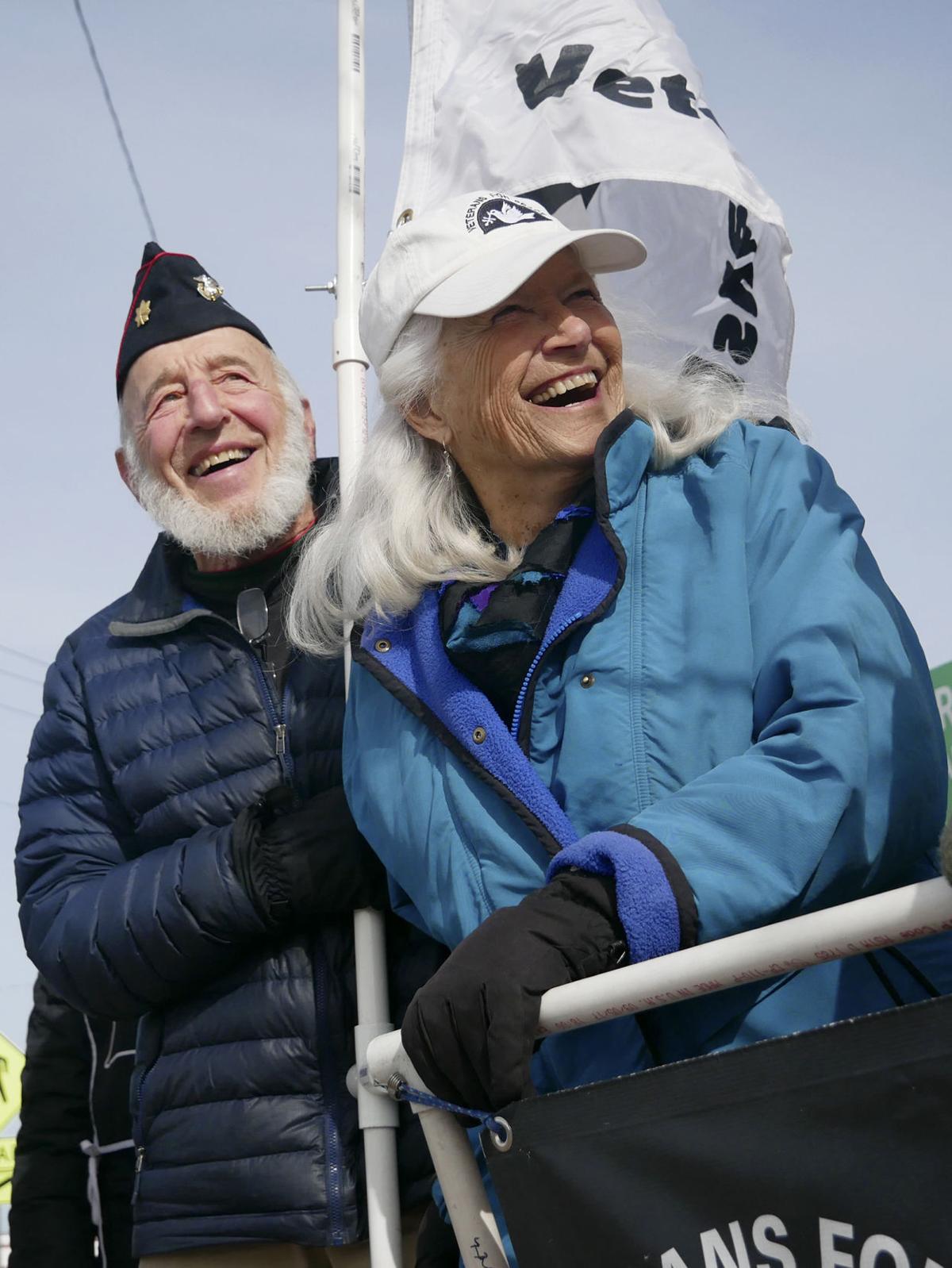 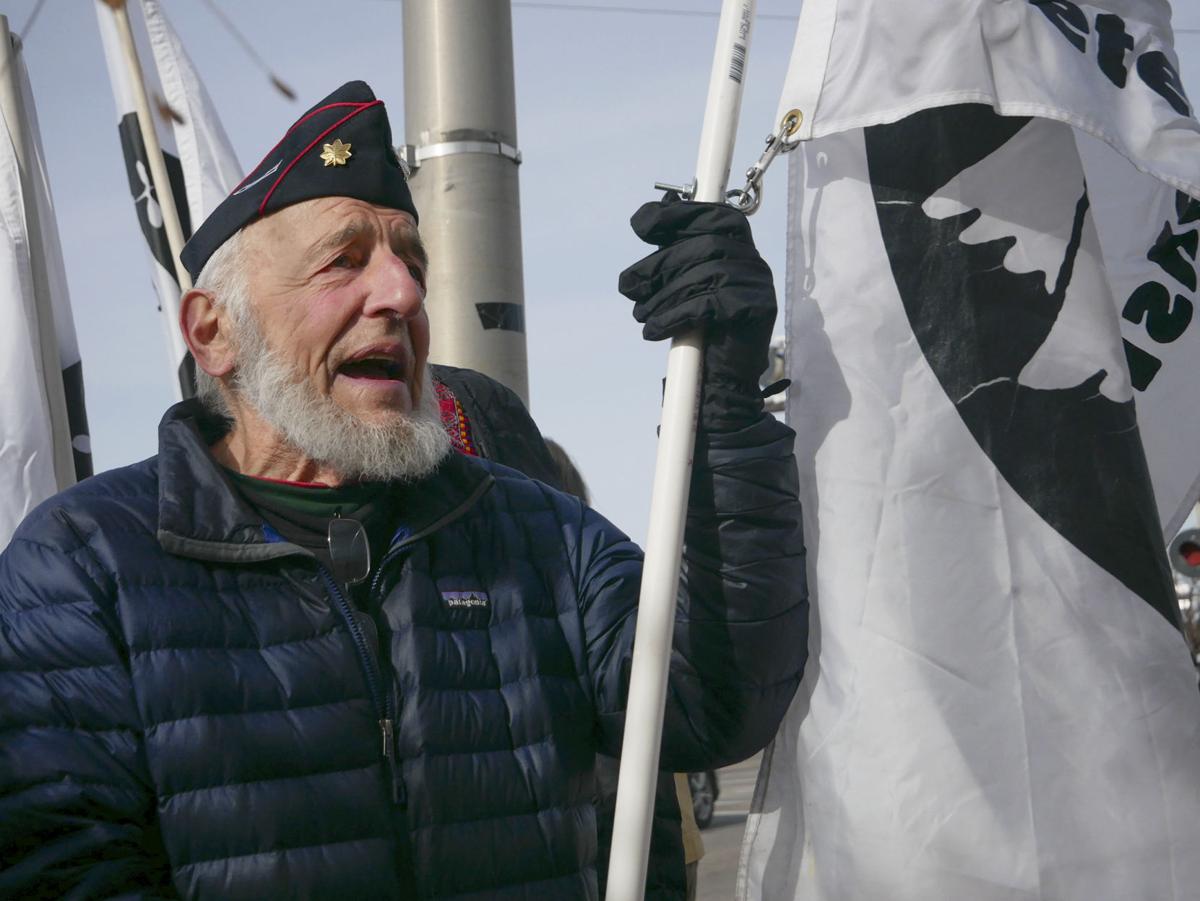 Ken Mayers is back in the state after being arrested in Ireland during an anti-war protest on St. Patrick’s Day. Matt Dahlseid/The New Mexican 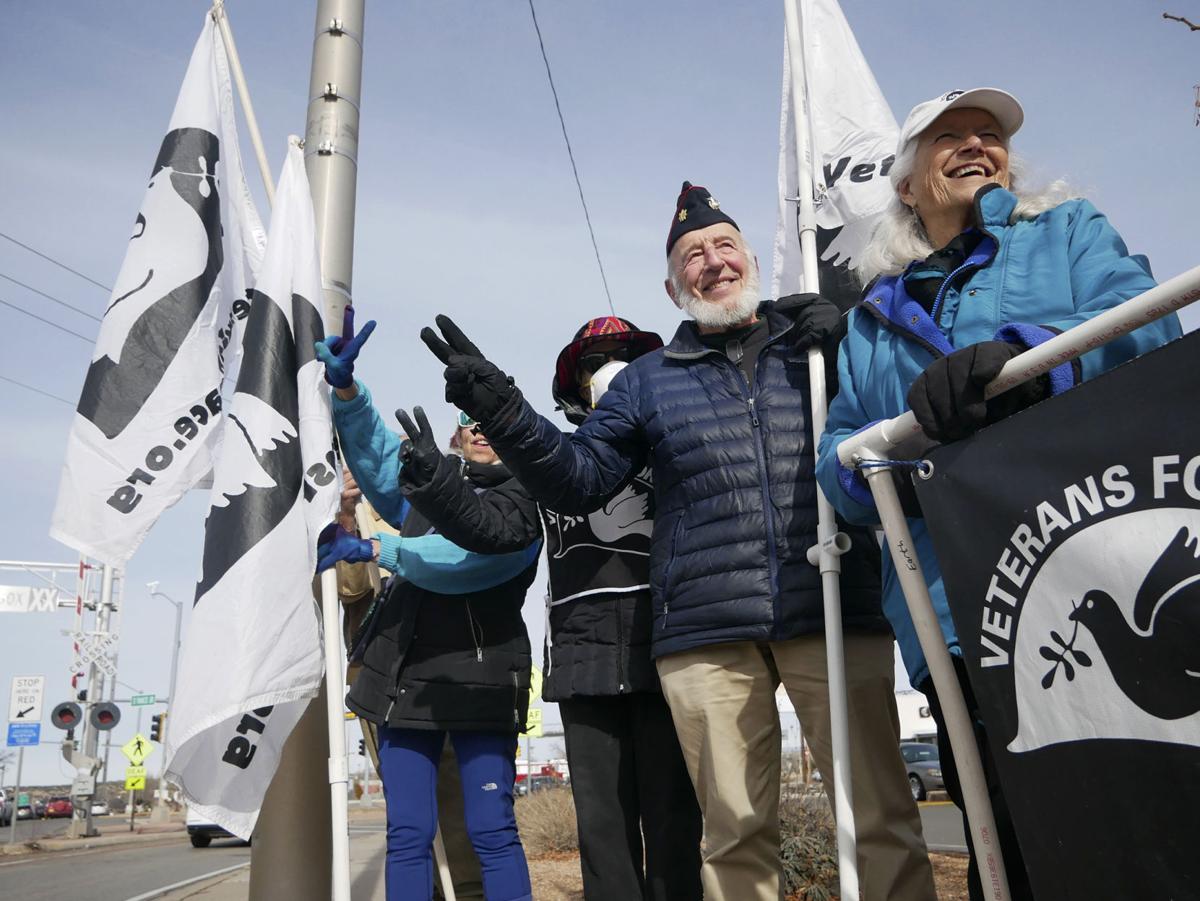 Ken Mayers, second from right, flashes a peace sign to drivers on Cerrillos Road on Friday alongside other activists in support of Veterans for Peace. Matt Dahlseid/The New Mexican

Ken Mayers, right, stands alongside Jasmine Stewart, left, and Dia Winograd at the corner of Cerrillos Road and St. Francis Drive on Friday in support of Veterans for Peace. Matt Dahlseid/The New Mexican

Ken Mayers is back in the state after being arrested in Ireland during an anti-war protest on St. Patrick’s Day. Matt Dahlseid/The New Mexican

Ken Mayers, second from right, flashes a peace sign to drivers on Cerrillos Road on Friday alongside other activists in support of Veterans for Peace. Matt Dahlseid/The New Mexican

Kenneth Mayers  beamed as motorists waved and honked their horns in support of the Veterans for Peace contingent standing on the corner of St. Francis Drive and Cerrillos Road.

He was home again.

Mayers was one of eight Veterans for Peace activists who flashed peace signs, banners and flags at motorists Friday in what has become a weekly event at the Santa Fe street corner.

But Mayers has been missing from the protest for nearly nine months, denied permission to leave Ireland after he and fellow protester Tarak Kauff of Woodstock, N.Y., were arrested and charged with trespassing and committing criminal damage during an antiwar protest at Shannon Airport on St. Patrick's Day.

Though they spent less than two weeks in jail, their passports were confiscated, and they had to work their way through an array of courts to finally land a trial date — April 13, 2021 — before getting approval  to return to the United States .

Kauff returned to New York on Tuesday; Mayers arrived in New Mexico on Thursday. On Friday, he was back protesting war — any war used as "an instrument of national policy for any nation," he said.

"Because it's what I do," he said of returning to the fight so quickly after landing back in New Mexico. "I've missed it."

His colleagues embraced him, shook his hand and exchanged smiles, happy that, as fellow activist Michael Messner put it, "The heart and inspiration of Veterans for Peace is back."

But it was a long journey home. And he was only supposed to be in Ireland for a week or so before taking his partner, Pam Gilchrist, on a honeymoon. She's still waiting for that trip, she said Friday.

Mayers and Kauff intended to get arrested to draw attention to Shannon Airport's policy of allowing U.S. military planes to stop there en route to the Middle East. Police arrested them at the airport when they moved to inspect an aircraft they believed was contracted to the U.S. military.

Though Ireland has long positioned itself as neutral when it comes to international military conflicts, it has for years offered Shannon Airport as a stopover for U.S. military aircraft.

Arresting officers told the men they would likely be out of jail by the next morning, but it didn't work out that way. Though they were freed less than two weeks later, their passports were confiscated, and they were told not to leave the country because they were considered flight risks.

The men used their time there to stage and take part in a number of antiwar marches and talks, and interact with members of Ireland's chapter of Veterans for Peace.

And they managed to persuade a judge to move their trial from the county where Shannon Airport is located to Dublin because, as Mayers said, they felt they would not get a fair trial in a county where the economy is so dependent on the airport's business.

They stayed with friends in the "resistance," as Mayers put it, during their time there, writing and calling their loved ones when possible.

"I think it was harder on Pam than me," Mayers said, casting a loving look at his partner.

A quest for peace has driven Mayers — who was born in New York City in February 1937 — since he resigned his commission as an officer in the U.S. Marines late in 1966. He then attended the University of California, Berkeley to earn a doctorate in philosophy. He and his wife, Elizabeth, moved to Santa Fe 20 years ago. She died of cancer in 2005.

In spring 2002, Mayers co-founded the Santa Fe chapter of Veterans for Peace. The global organization, which began in 1985, relies on the voices and experiences of military veterans to advocate for peaceful solutions to conflicts. Mayers’ dedication to Veterans for Peace and peace-related activism earned him recognition as one of The New Mexican's 10 Who Made a Difference in 2013.

His activist roots may have been planted as far back as the late 1930s and early '40s, when he was a child. He said at least 17 members of his German Jewish family died in concentration camps during the Holocaust. “The lesson I took from that is no one should ever be oppressed,” he told The New Mexican in 2013.

Mayers said there are at least two other cases of protesters bypassing barriers at Shannon Airport to approach and inspect U.S. military planes that will be heard in the Irish courts in 2020. He said if they are dismissed, as previous cases have been, he and Kauff may not have to return to Ireland because "they [the Irish government] might just ask themselves, 'Why go to all the cost and trouble to hold another trial if it's just going to be dismissed?' "

That would disappoint him, he said. "We want to put the Irish government and the American government on trial," he said. "Ireland is complacent in the horrors that the United State has inflicted on the Middle East."

He's not sure what he does makes much of a difference, but he believes he has to continue waging a war of activism to stop unjust and unnecessary wars of killing.

"It only takes one brave soul [to stand] up to the schoolyard bully to erode that bully's power," he said.

And having served in the U.S. military for over eight years, he said, half-joking, "I was part of the American empirical machine, so I guess I'm doing my penance for it."

In the meantime, he's happy to be back in Santa Fe for the holiday season.

So is Gilchrist. "I haven't put up a Christmas tree in years," she said. "But this year, I'm putting up a Charlie Brown Christmas tree."

Ken's a good man, but I wish that he, and Vets for Peace, would address the problems here in New Mexico, esp the problems vets have with the police. Think Globally, Act Locally. He forgets that.