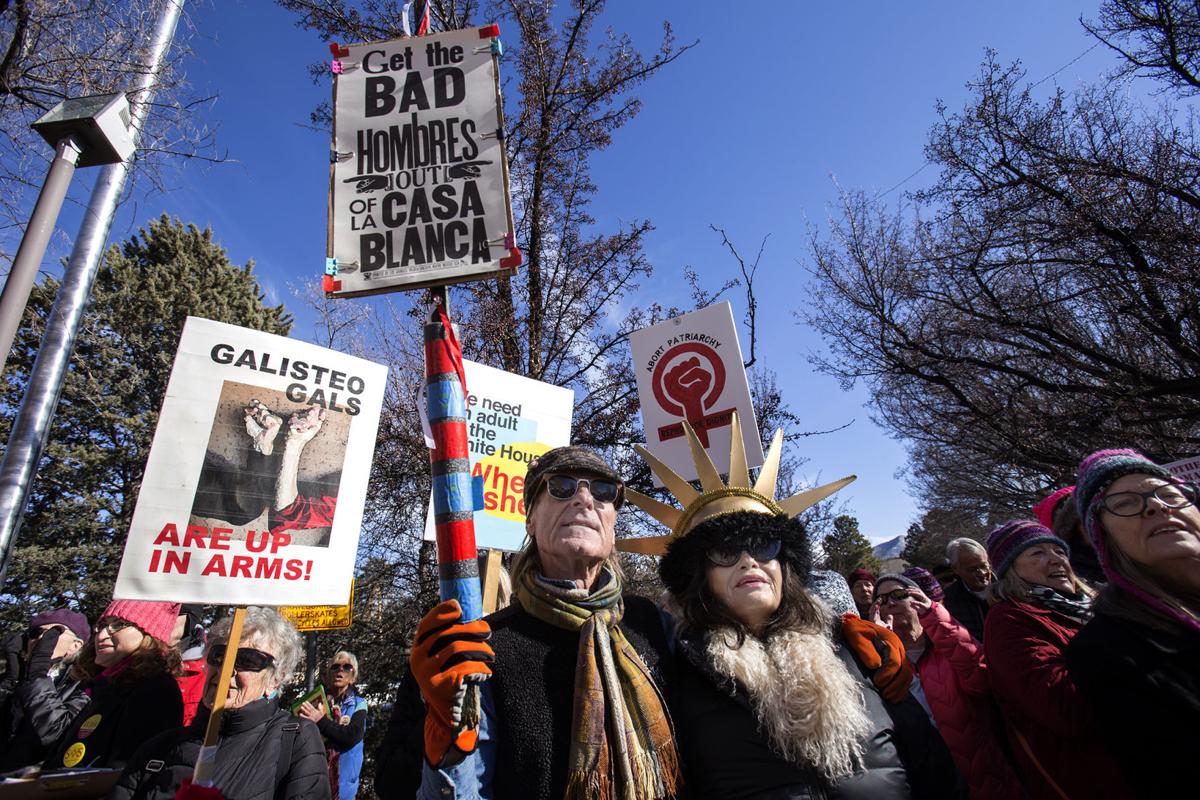 From left, TW Man and Shelley Horton Trippe of Santa Fe attend the annual Women’s March rally Saturday at the Capitol. The pair attended the first event in 2017. Attendance was significantly lighter this year and planning didn’t start until 16 days before the rally was held. 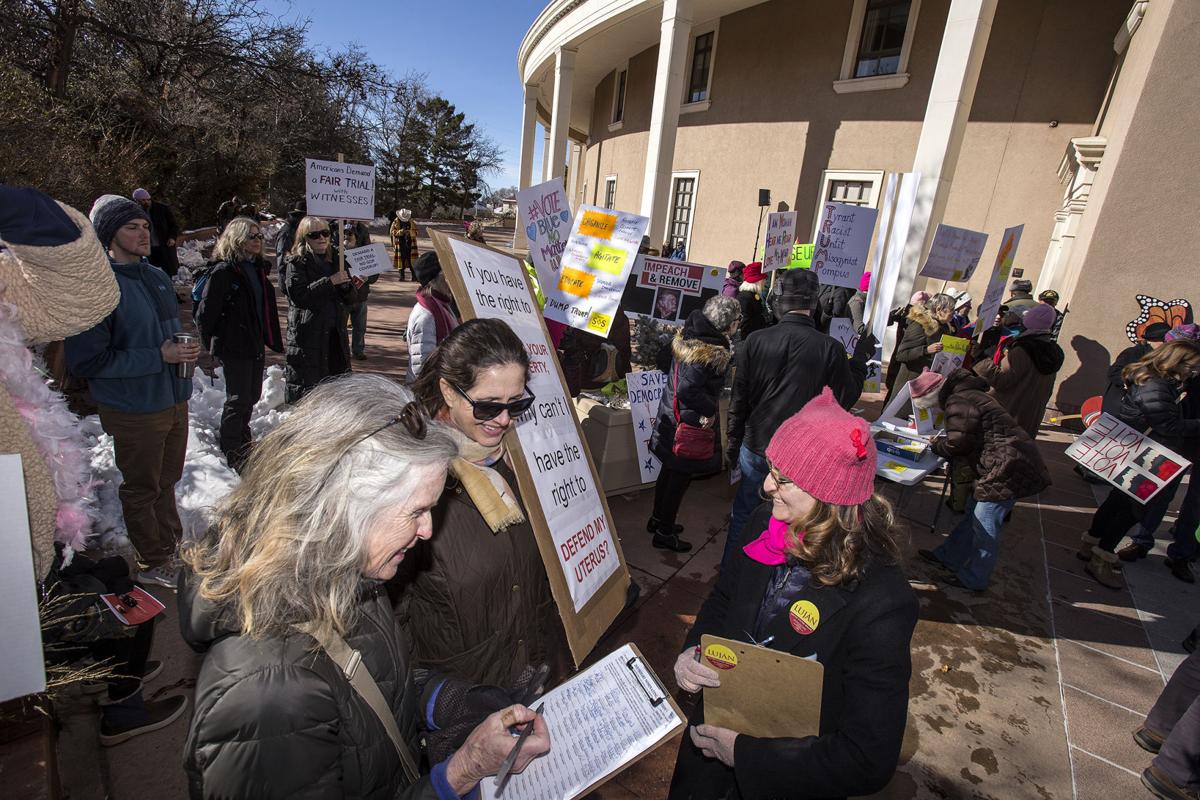 Jean Grehan, left, and Amy Adler sign their names to a petition for U.S. Rep. Ben Ray Luján, who is running for the U.S. Senate, at the Capitol during a Women’s March rally. Tara Lujan, no relation to Ben Ray Luján, was collecting signatures. This year’s event has significantly less people than previous years.

From left, TW Man and Shelley Horton Trippe of Santa Fe attend the annual Women’s March rally Saturday at the Capitol. The pair attended the first event in 2017. Attendance was significantly lighter this year and planning didn’t start until 16 days before the rally was held.

Jean Grehan, left, and Amy Adler sign their names to a petition for U.S. Rep. Ben Ray Luján, who is running for the U.S. Senate, at the Capitol during a Women’s March rally. Tara Lujan, no relation to Ben Ray Luján, was collecting signatures. This year’s event has significantly less people than previous years.

Protesters in Santa Fe on Saturday joined thousands across the country this weekend who are attending rallies for the fourth year of the Women’s March.

Despite a falling number of participants, which some attributed to protester fatigue and poor event planning, those who were outside the Roundhouse proudly wore their bright pink beanies, held signs urging people to vote for a Democrat in this year’s presidential election and supported everything from a woman’s right to choose to supporting the passage of the Equal Rights Amendment to the U.S. Constitution.

“Women need to be equal to men in every part of life,” said Janet Williams, president of the Santa Fe chapter of the National Organization of Women.

This year’s event had a partisan bent that went beyond what was typically seen at previous marches, largely because it was organized by the Santa Fe County Federation of Democratic Women along with the Santa Fe chapter of the National Organization of Women.

Bernadette Vadurro, the Federation of Democratic Women president, said organizers put together the event in just 16 days once they realized no other group had filed a permit with the city to conduct a march to the Plaza.

The sidewalk leading to the stage was dotted with enthusiastic volunteers holding clipboards asking people to sign petitions so their chosen candidate can get on the ballot in the June 2 primary election.

The rally’s heavy focus on politics was of no worry to Vadurro, who said everything is political today.

With such a short window of time to organize and raise money for the event, everyone who spoke, with the exception of leaders of local nonprofits, was asked to donate at least $50 to go toward the rally’s expenses, Vadurro said. Any money leftover will go to planning next year’s event, she said.

“The women did this in two weeks of preparation,” Vadurro said, “and it’s because women get things done.”

Attendance has dropped every year since 2017, when an estimated 10,000 to 15,000 people marched through Santa Fe’s streets. That number fell to an estimated 4,000 to 5,000 marchers in 2018 and to an estimated 2,500 people who attended in 2019. Although Saturday was an unseasonably warm day, turnout was low, numbering in the hundreds.

Standing near the back of the stage, Jennifer Benson held a sign that said “Grab him by the ballot,” a play on President Donald Trump’s language in the 2005 Access Hollywood tape in which he describes sexually assaulting women.

This was the first time Benson attended the event in Santa Fe; she previously attended marches in Orlando, Fla.

“I’m not surprised that momentum has diminished,” Benson said. “I think it happens in every movement.”

“It was a time crunch,” Vadurro said. “We reached out to the Three Sisters [Collective] that did it last year. They have another commitment. I reached out to all my Native American contacts and they were all out of state and had other events going on.

Corrine Sanchez, executive director of Tewa Women United, wrote in an email Saturday that the group was not invited to participate in this year’s rally.

Christina M. Castro, a founder of Three Sisters Collective, said the group received an email earlier this month asking if someone from the organization would do a blessing at the rally.

Had she been given more notice, she said, she would have told organizers to contact Tewa Women United because Santa Fe is on Tewa land.

“In the future, you know, all these entities that have come together to organize in each varying year should really try to work together for the future,” Castro said.

I certainly hope the woke, left wing/socialist elites and snowflakes had fun wearing their "kitty" hats and screaming obscenities about Trump. I am continually amazed how so many in Fanta Se take every opportunity to attack Trump, even when they should be commemorating the brave women, and some men, who this 100th Anniversary should be focused on. Even those like my great grandfather, who in 1910 at the NM Constitutional Convention, tried to include a statute that would give women the right to vote, defeated of course by Catron, Fall, and the Santa Fe Ring, and he was punished for it. But no, in this city hate must be the flavor of the day for any protest, except perhaps for the Catholics, as Pelosi lectures us Catholics are incapable of hate........ ;-{)