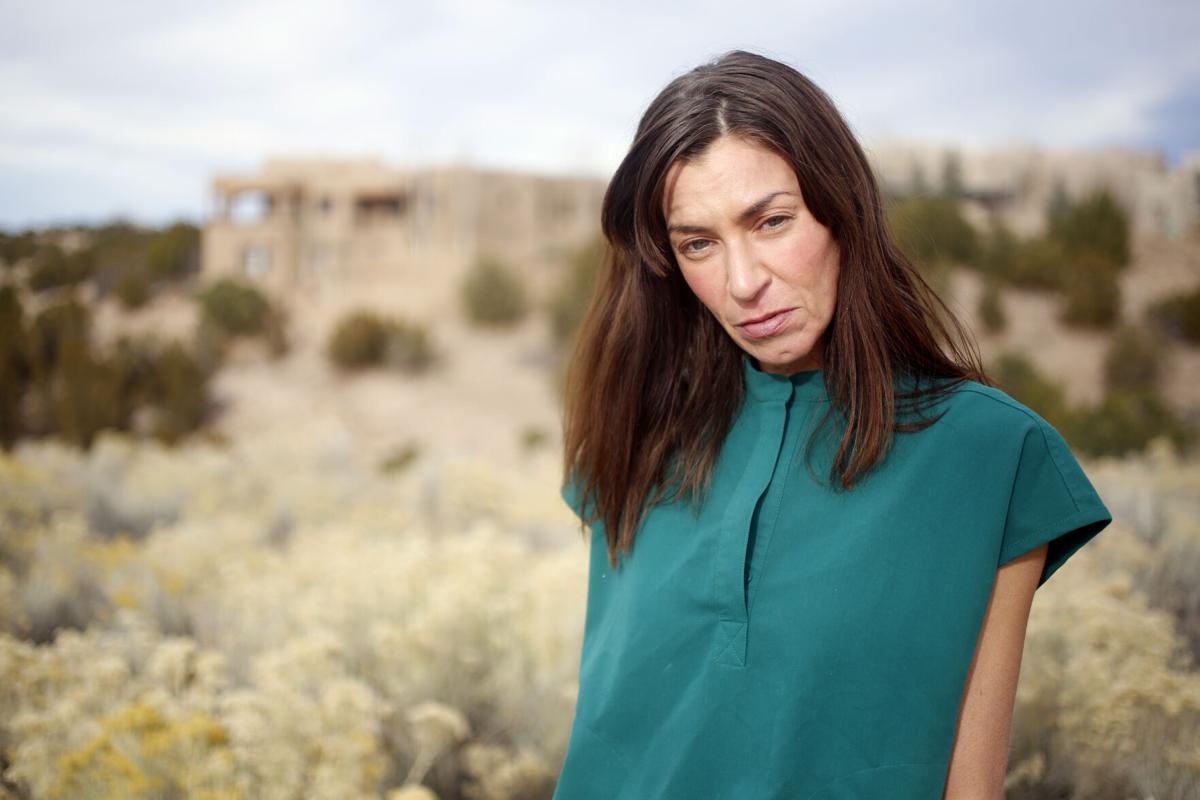 Amy Herrera’s husband Damian Herrera, a local chef and caterer, has been stuck in Mexico for the past two years as he tries to become a U.S. citizen and return to Santa Fe. 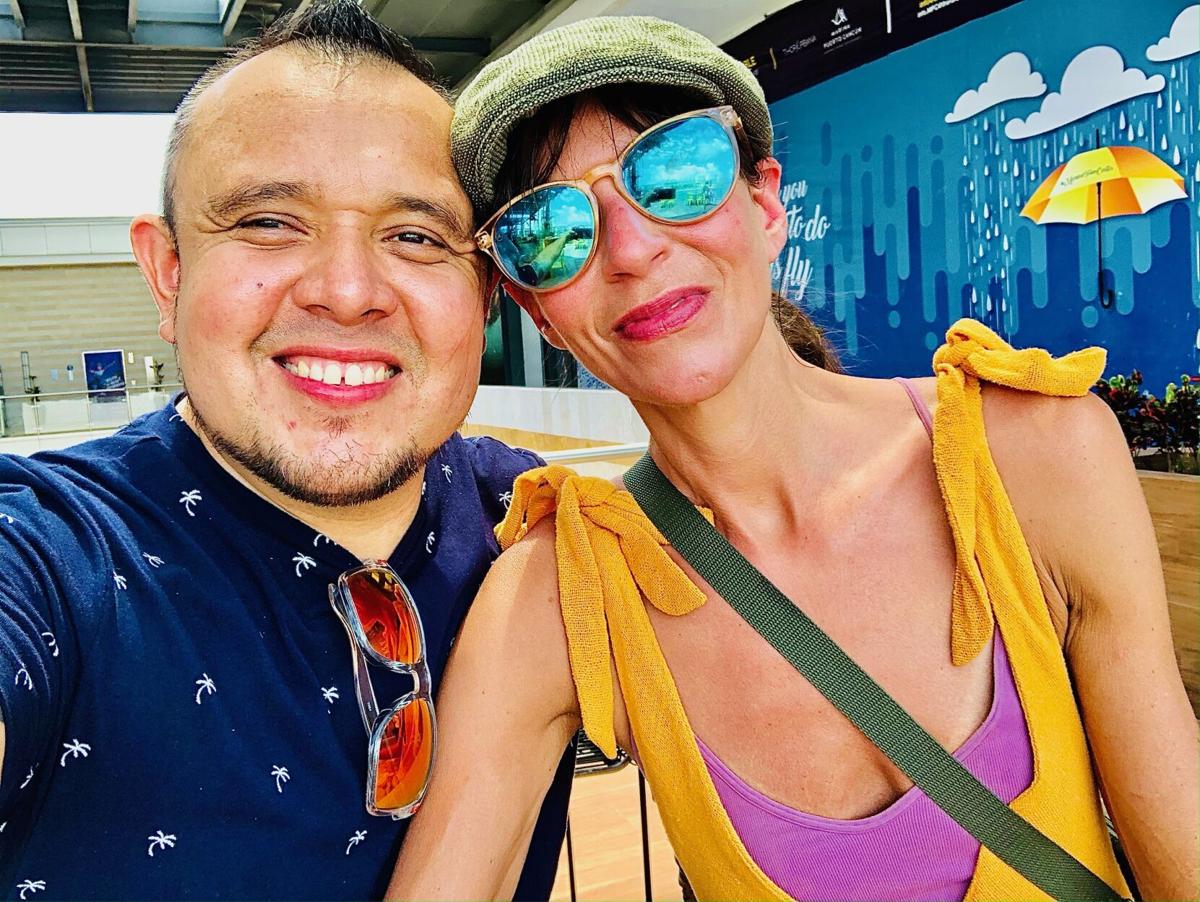 Damian and Amy Herrera in happier times. He had been living in Santa Fe for about 20 years and started the process two years ago to become a U.S. citizen. But now they have been separated as Damian is back in his native Mexico trying to return to Santa Fe.

Amy Herrera’s life has been riddled with some dark days.

When her husband, an undocumented immigrant who had been living in Santa Fe for about 20 years, tried to correct past wrongs and go through the legal process to become a U.S. citizen, the nightmare began — a harrowing trail that sent Damian Herrera, 39, back to his native Mexico and apart from his wife.

His application for a visa was turned down under former President Donald Trump’s “public charge” rule — referring to an evaluation or assessment to determine whether an applicant is likely to rely on government support, according to the Immigrant Legal Resource Center.

The Herreras contended they wouldn’t need government benefits and that the assessment had been based on an unusual low-income year for Amy. Regardless, Damian — a popular local chef and caterer who also taught fitness classes — became entangled in a complex immigration system, thousands of miles away from his wife.

With the public charge rule no longer in effect, the Herreras and their new attorney hope Damian’s case receives renewed attention and a different outcome and the couple will someday be reunited.

“This man was my partner in everything, my best friend, the love of my life,” Amy, who is a U.S. citizen, said Tuesday.

Santa Fe immigration attorney Allegra Love, who became involved after Damian’s visa application was denied at the U.S. Consulate, has filed what she calls an “aggressive request” for Damian to be paroled back into the country to be with his wife and get his green card.

“I am submitting this request for urgent review for parole on humanitarian grounds due to the fact that Damian has been separated from his wife for years now due to the Trump administration’s inhumane immigration policies and absolutely deserves to be reunited with her,” Love wrote in the Sept. 23 request to the U.S. Department of Homeland Security.

“After 2 years of separation ... receiving an I-94 would allow him to reunite with his family and make him immediately eligible to adjust status,” she wrote.

Form I-94 is an arrival and departure record issued to undocumented immigrants who are, among other things, adjusting their immigration status while in the U.S., according to U.S. Customs and Border Protection.

As part of Damian’s request, Love included dozens of letters of support from friends and family members attesting to his character, work ethic and contributions to the community.

“In addition to his wife, Damian has a truly enormous community of friends, co-workers, and supporters in Santa Fe,” she wrote.

With the exception of pleading guilty to drunken driving in 2017, Damian has been described as an upstanding citizen.

“He has no other criminal record and we have provided sixty six letters from members of the Santa Fe community attesting to his positive character and the blessing that he is to his neighbors and friends,” Love wrote in her request while explaining why he isn’t a danger to the community.

After his visa application was denied in August 2019, Damian remained in Mexico over the next year. During that time, he filed a number of appeals to the decision and spent thousands of dollars on the process. Each time, the appeals were denied.

In what Love called an act of desperation, Damian decided to reenter the country illegally, as he had done at the age of 21.

“When he could not take it anymore, he decided to cross the border, which I personally cannot fault him for. His family is here. His wife is here. His wife needs him,” Love said. She wrote in her request that Amy’s physical and mental health has declined drastically throughout the ordeal.

“I know that some people have really hard feelings about this. I do not,” she said. “I find love to be a very, very, very, very powerful and persuasive motivation for migration, and I challenge everyone to think really hard about what it was like to be in that situation.”

Shortly after crossing the border by foot in California, Damian and a group of other undocumented immigrants were picked up by U.S. Border Patrol agents on Interstate 8 near El Centro after their driver was pulled over. He was a material witness against the cartel members who had attempted to smuggle him, Love said.

“The day after he testified, [immigration agents] picked him up and dumped him in Mexico in the middle of the night,” Love said, adding Damian’s pleas to talk to an attorney fell on deaf ears.

“The first I heard of him was him calling me from Northern Mexico being like, ‘What the [expletive] do I do? I’m terrified,’ ” Love said. “He was hiding.”

Amy described the ordeal as “completely life changing” and “heartbreaking.” She said she wished Damian would have waited to apply for his visa.

“This whole thing happened because we were trying to make things right,” she said. “He could have lived here the rest of his life, and no one would have ever said anything. He had a tax ID number. He paid taxes.”

Despite the legal challenges and separation from her husband, Amy, who owns a colonics business, said she won’t give up until Damian is back in her arms.

“There’s no one else out there for me like him,” she said. “I can’t explain ... how much we need each other. We are such a complement to each other. Everything I am, he is not, and everything he is, I am not.”

Amy said she’s reached out to “every public figure she could” to ask them to help Damian return to the country.

“I’ve been wronged. I’m a citizen, and I deserve to have the man I love with me,” she said, fighting back tears.

Amy and Love are requesting people in the community who know Damian, and even those who don’t, to call or email the ombudsman of U.S. Citizenship and Immigration Services, which administers the country’s naturalization and immigration system, and ask for approval of Damian’s request for humanitarian parole.

In a telephone interview from the Mexican state of Yucatán, where he is now living, Damian said he longs for the day to be reunited with his wife.

U.S. Citizenship and Immigration Services can be reached at 202-357-8100 or by email at cisombudsman@hq.dhs.gov. Damian's full name is Roger Damian Herrera Cherrez, and his so-called Alien Registration Number is 214-374-172. Herrera's wife and attorney also encouraged supporters to contact members of New Mexico's congressional delegation to urge U.S. Citizenship and Immigration Services to grant Damian's request.

[ohmy]This article is ridiculous and a waste of print. You never share a person's "A" number online, it's worse than sharing your Social Security Number. The law changed 2 years ago about leaving and returning to the U.S.A. on any visa with a 5-10 year penalty. IThe pandemic has made a backload of about 3 years. If the lady is so in love she could easily obtain a visa to live in Mexico. It took me 18 months to bring my wife to the USA legally at the same cost as a coyote.

I am pro- documented immigration. We need people from poor countries and we should allow more amnesty, especially for DACA. Coming here knowingly without proper documentation is a serious crime and people are not accountable when they are here illegally.

This article reminds me of the woman with 2 kids who was upset she couldn't go skiing in the Albs and was evicted from 8 people's homes in 2 months by people who felt sorry for her and then she had no place to stay. Remember that? What is going on with the Newmexican?

This is what happens when you enter the US illegally. It isn't always fair and some who do enter that way may in fact be deserving of a chance to be here, contribute and eventually become a citizen. But we can't take everyone and the laws must be followed. Some folks who apply and stay outside of the county may wait decades. Millions who come illegally never get caught. In short, the entire system is broken and has been for decades. Current admin is making it much worse.

Lets just clear up cases like this guy if they truly deserve to be here. Then, CLOSE THE DOOR for at least 10 years and figure this sh$t out. Oh, and no welfare or SS benefits for any illegal until they are investigated, vetted and pay back everything they have gotten up to this point. Easy to do if there is the will to do it.

Kind of a strange photo to use for the main feature photo. I do see a lot of those Santa Fe puckered lady scowls around town, though.