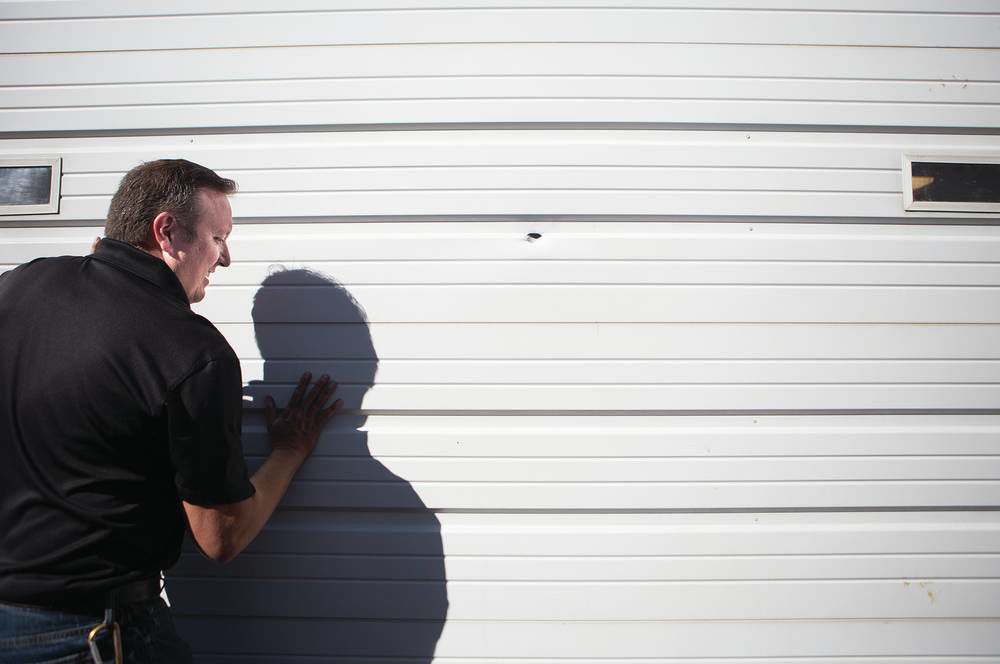 Lee Garcia, manager at Garcia Tires on Airport Road, lowers one of the shop’s garage doors on Thursday, revealing a bullet hole in the center. He said the damage occured Wednesday night during a fatal shooting near the shop. Olivia Harlow/The New Mexican 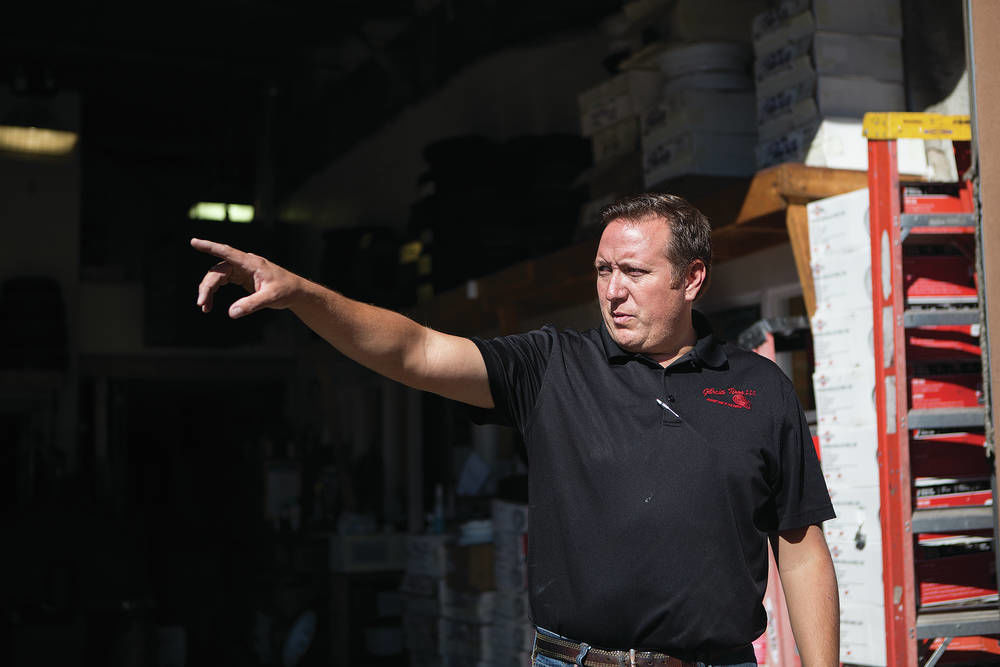 Lee Garcia, manager at Garcia Tires on Airport Road, points Thursday to the scene of a homicide that took place near the shop Wednesday night. Olivia Harlow/The New Mexican

Lee Garcia, manager at Garcia Tires on Airport Road, lowers one of the shop’s garage doors on Thursday, revealing a bullet hole in the center. He said the damage occured Wednesday night during a fatal shooting near the shop. Olivia Harlow/The New Mexican

Lee Garcia, manager at Garcia Tires on Airport Road, points Thursday to the scene of a homicide that took place near the shop Wednesday night. Olivia Harlow/The New Mexican

A man was fatally shot in the leg by an unknown attacker Wednesday night while walking a dog by an abandoned McDonald’s just west of the intersection of Airport and South Meadows roads.

Richard Milan, 64, had just arrived in town with his wife. The pair were on a cross-country road trip from California to their home in Michigan, a relative said, and had stopped in Santa Fe for the night.

After hearing about the shooting around 9 p.m., parishioners at a nearby church ran out to help stem the flow of blood from Milan’s gunshot wound. Despite their efforts, the man from Kalamazoo, Mich., did not survive.

Details on who might have shot the man, and why, were scant. Valdez said police were unsure whether they were looking for a single shooter or many suspects, or what might have motivated the attack.

Milan is the fifth homicide victim in Santa Fe this year. His killing comes less than a week after the death of 5-year-old Jayden Curtis, who police say was strangled by his stepmother and was taken off life support a few days later, after medical officials declared him brain-dead.

Terry Milan, a first cousin of Richard Milan, said his relative was a jack-of-all-trades who did everything from swimming pool installations to roofing and carpentry work in the Kalamazoo area.

He and his wife had gone to California to pick up a camper trailer from another relative, Terry Milan said.

“They were traveling through Santa Fe and they had stopped for the night,” he said. “The best I know is that [Richard] was out walking the dog when the attack happened.”

After the shooting, Valdez said, the dog ran back to an apartment complex on South Meadows Road where Milan had initiated the walk.

The shooting happened near the entrance to the now-shuttered McDonald’s restaurant at Airport Road and Lucia Lane, just north of Sweeney Elementary School.

The Rev. Joe Cortez, pastor of the New Beginning Christian Church, across Lucia Lane from the McDonald’s, said the church was full of parishioners at the time.

Cortez didn’t hear any shots over the music playing during a church potluck, he said, but when parishioners learned what had happened outside, a handful of them ran to help Milan.

They used linens from the church and their own shirts to put pressure on his wound, Cortez said, at the direction of a nurse from the congregation. As the parishioners waited for first responders, he said, they kept speaking with Milan, trying to make sure he was awake.

Throughout the ordeal, Milan was responsive, and Cortez thought he was going to make it.

“It’s just really terrible because you care for people, and it’s hard to see them experience that and go through that,” Cortez said.

Neighbors said the area has gotten darker and has seen less traffic since the McDonald’s shut down not too long ago.

Tony Potter, who owns Jeff Speakman Kenpo 5.0 Santa Fe, a martial arts studio, with his wife, Erika, says he doesn’t necessarily consider the area unsafe. But he and his wife have found needles around their property, he said, and the couple worry about crime in an undeveloped area just south of where Milan was fatally shot.

The incident was jarring for Erika Potter, who said children often play in a nearby parking lot while their parents are in church, and kids walk to and from schools and businesses in the area.

“It’s very concerning because we have kids,” she said.

The martial arts studio was not damaged in the shooting. But Cortez said a car in the church parking lot had a shattered window, possibly from a stray bullet, and the manager of the Garcia Tires store next door said there was a hole in a garage door. Lee Garcia said he thinks a bullet hit the door and became embedded in the back wall of the garage.

“It’s just unfortunate, you know?” Garcia said of the shooting. “This is like our home. I spend a lot of time at my business. You feel safe.”

Terry Milan described his cousin Richard as a “good, kind and generous” person.

“If somebody was in trouble financially, Richard had no problem helping them out with little or no expectation of being paid back,” Terry Milan said. “… If you needed a hand, Richard was there to help you.”

Police are asking business owners in the vicinity of the shooting to review their surveillance video from Wednesday night and to alert officers if they see anything suspicious or unusual, Valdez said.

Anyone with information about the shooting can contact Sgt. Bryan Martinez at 505-955-5226.

May 5: James Babcock, 45, who allegedly was beaten the day before his death.

June 21: Michael Willms, 58, who was found stabbed to death in his midtown apartment.

July 30: Robert Romero, 52, who was fatally shot in his backyard in a south-central neighborhood.

Sept. 25: Jayden Curtis, 5, who allegedly was strangled by his stepmother a few days earlier. Melynie Curtis, 20 faces a charge of child abuse resulting in death. She is the only suspect charged in a homicide in the city so far this year.

Sept. 26: Richard Milan, 64, who was fatally shot while walking his dog on Airport Road.