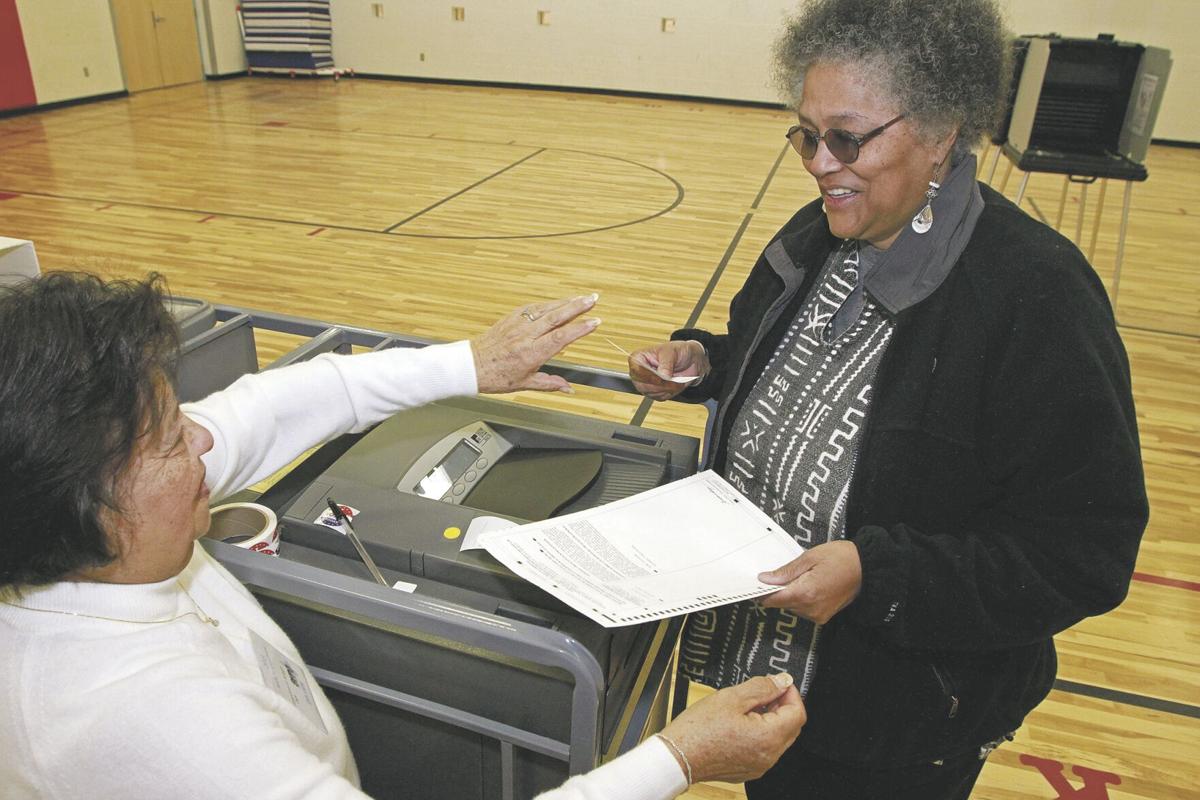 Lorraine Price submits her ballot at Salazar Elementary School as she votes in the 2013 school board election. Price won the District 3 seat. 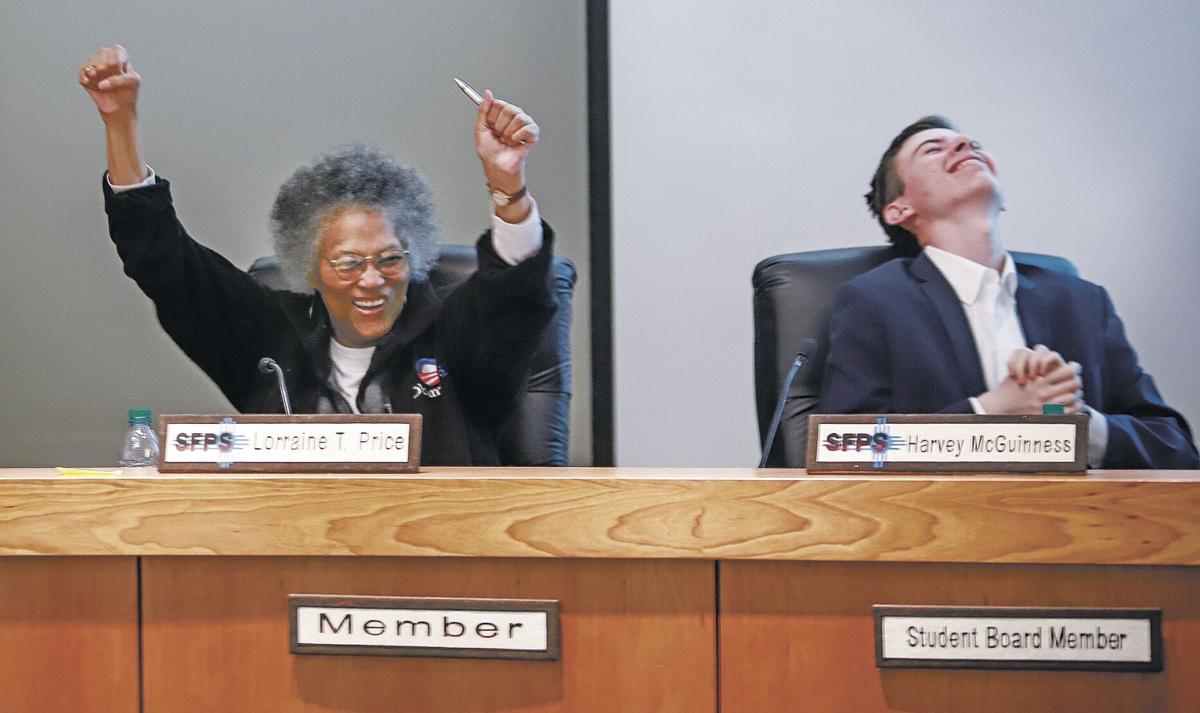 Lorraine Price submits her ballot at Salazar Elementary School as she votes in the 2013 school board election. Price won the District 3 seat.

When Lorraine Price hammered down the gavel as president of the Santa Fe school board, you knew it was time to end the discussion.

Whether she was serving as president or in some other capacity on the board, Price adopted a no-nonsense, let’s-get-to-the-point attitude that stressed efficiency in getting the job done.

“She didn’t suffer bull crap — ever,” current school board President Kate Noble said of Price, who died last week at her home in Santa Fe at the age of 72.

The cause of death remains unknown, but Price had been dealing with health issues for years.

“She believed in brevity and not wasting people’s times in saying the same thing over and over again,” Noble said.

A Brooklyn native who was African American, Price came of age during the civil rights era of the 1950s and ’60s.

During board meetings, she often brought up her past experiences marching and protesting on behalf of women, students and minorities.

She told The New Mexican in 2013 that despite her advocacy, she was only arrested once — for trying to help a friend see a sick relative in the hospital. The charges were later dropped.

As assistant principal of Piñon Elementary School, Price served on a committee that pushed to end sexual harassment in the schools in the 1990s. She once taught a class on sociology, race and culture at Santa Fe Community College.

“I’ve seen where I can be helpful based on my experience, knowledge and love of teaching,” she said in 2012, when she announced her candidacy for the District 5 school board seat.

The following year, she told The New Mexican: “I care about our community. I want to make a difference on a policymaking level that I wasn’t able to when I was a teacher, an assistant principal and a principal.”

Former school board member Linda Trujillo said Price was a “ferocious advocate” for children who stood her ground on issues she believed in, even if her stance was unpopular.

Price often declined to discuss her reasons for voting for or against an issue. She sometimes would offer just a few words of explanation.

At other times, she spoke loudly and clearly about why she supported or opposed a measure — as when she voted against a bond that would pay for computers and other technological devices.

At the time, the law said the school board had the right to impose a bond without asking voters for approval, even though it would raise property taxes.

Price believed that even though it was the law, the board should not make that decision.

Price also brought humor to school board meetings with barbs that spotlighted the absurdity of an action or motion.

Noble said Price’s humor struck a balance between “is it worth fighting to get it right or better?” and “nothing is really that serious unless it’s life and death.”

Former school board member Steve Carrillo said that while he and Price did not always see eye to eye on issues, “there is no one I met in my life more committed to social justice and public service” than she was.

“She was dedicated to Santa Fe Public Schools,” he said. “You can’t ask for more.”

Price had not yet said whether she would seek reelection in November. Her term ran through the end of the year. Noble said board members will begin discussing how to replace Price in the coming days.

At the Aug. 12 school board meeting, Price’s voice was raspy, but she spoke with enthusiasm about seeing the board members in person again soon.

Trujillo said friends and family members hope to plan a memorial service for Price in the near future.

A couple of memories about Lorraine T. Price

Lorraine’s first professional love was medicine. She wanted to serve her community as a physician. So, she completed medical school and also studied medicine abroad.

She taught in the Honors Program at the University of New Mexico. That is where I first met her and fell in love with her thinking skills. She was one of the smartest people I have ever known.

Some people have opinions; Lorraine had perspectives, with facts to substantiate her perspectives. She was firm and strong as she headed toward any goal. I never saw her back down when she felt she was doing what was right.

She loved books. Her home had a long wall that was stacked/organized from floor to ceiling with books she had read and intended to read again and/or share with others.

She loved music and had a broad palate that ranged from jazz to the most eclectic classical music (baroque, classical, renaissance, and so forth), from blues to spirituals, from country to rock and roll, and from soul to lullabies. She loved it all, one genre of music as deeply as the other.

She loved thinking, sharing philosophical perspectives, and debating issues. In debate, she insisted on staying focused. She was firm, rational and, mostly, she won the debate.

As brash as she could be, there was a deep gentle core that knew only love. As a teacher, principal, and school board member, she gave all of herself, all of her love, to the academic arena. Life was not always easy; it has never been easy for a Black woman in our society who is in the struggle for equity for all people. Perhaps the struggles depleted her; she died far too soon. She had so much more to give the world, to each of us. May her memory be a blessing.

After this comment of yours, I trust others will NOT care about you. So insensitive and mean spirited.

She was a beautiful person who cared deeply for our children, I’m sorry I was never able to thank her in person for all she did.

People care about Lorraine Price she was a treasure in our community. Back under your bridge troll and take some time to reflect on what you just said and why you felt the need to make a fool of yourself.

Ms. Price was always an advocate for the staff and children of Santa Fe Public Schools. She will be missed by many, especially as a voice promoting social justice. As a former board member I respected Ms. Price, even when we disagreed. Rest in peace. Maureen Cashmon

I am saddened by this news. We have lost a soulful advocate and warrior. Rest in peace, Lorraine.