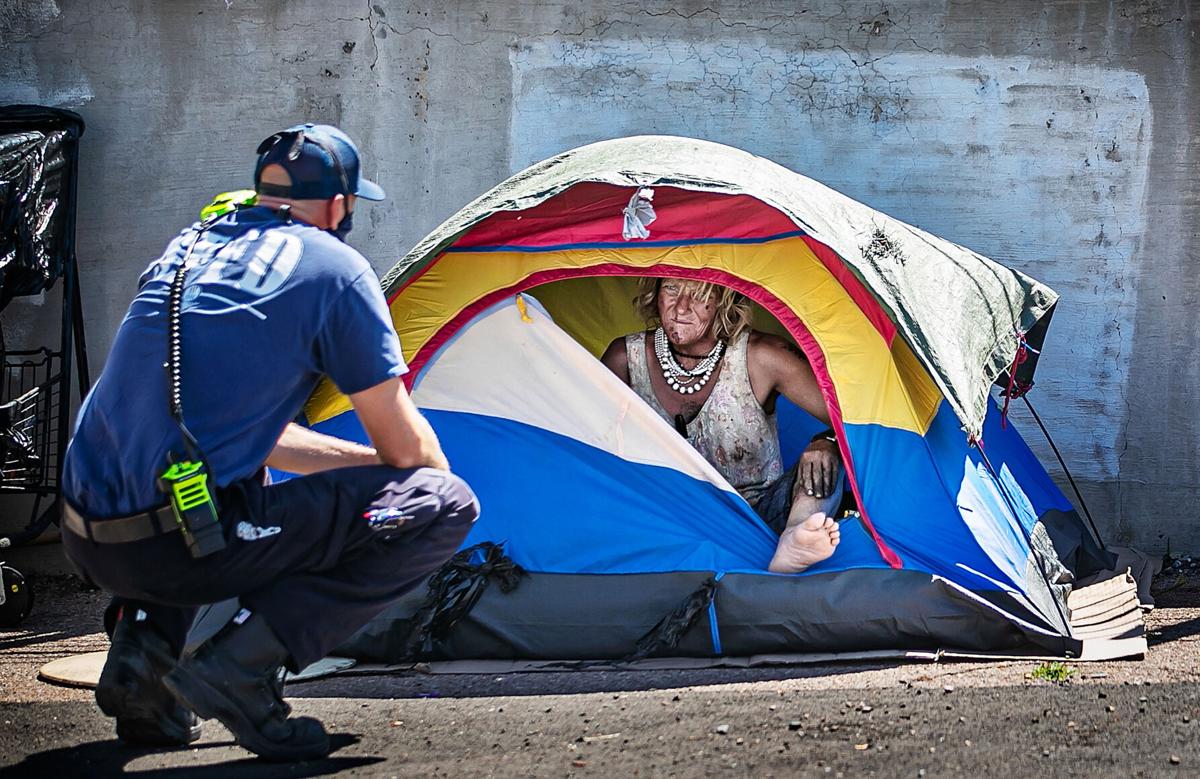 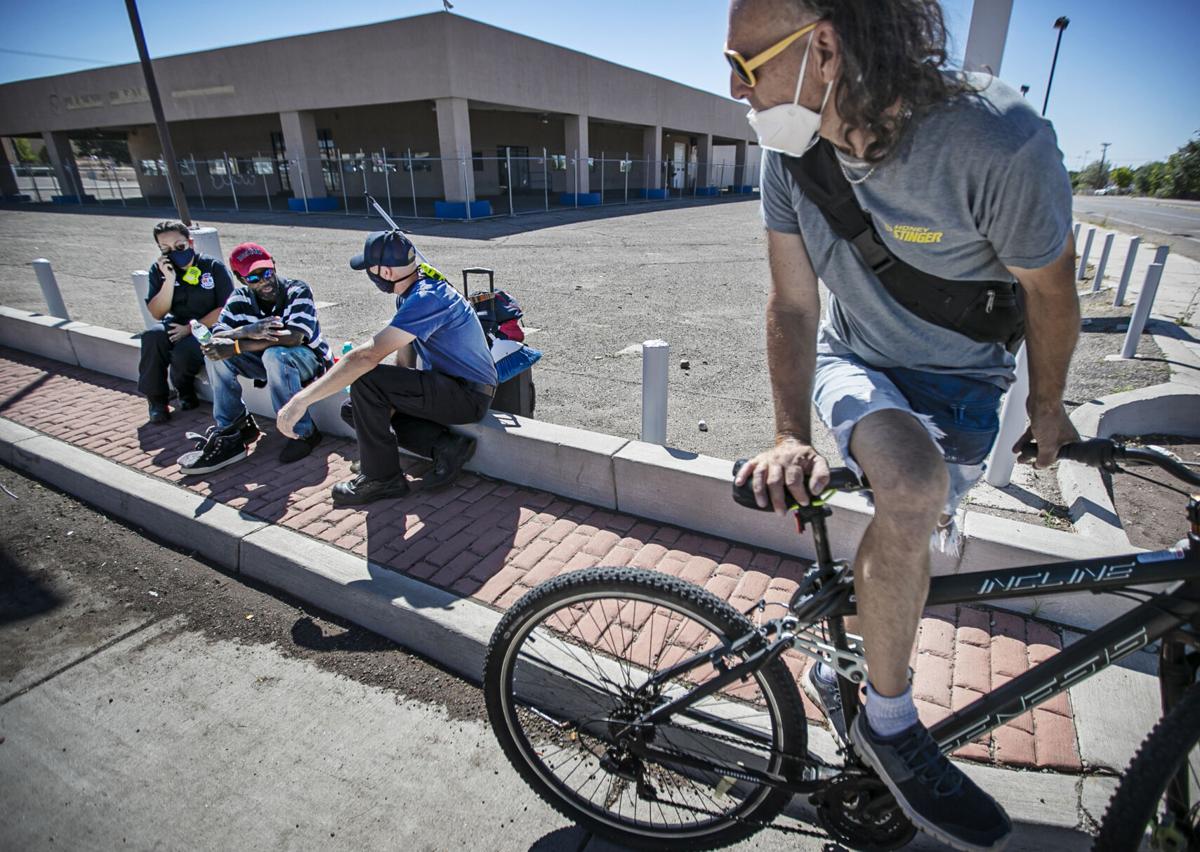 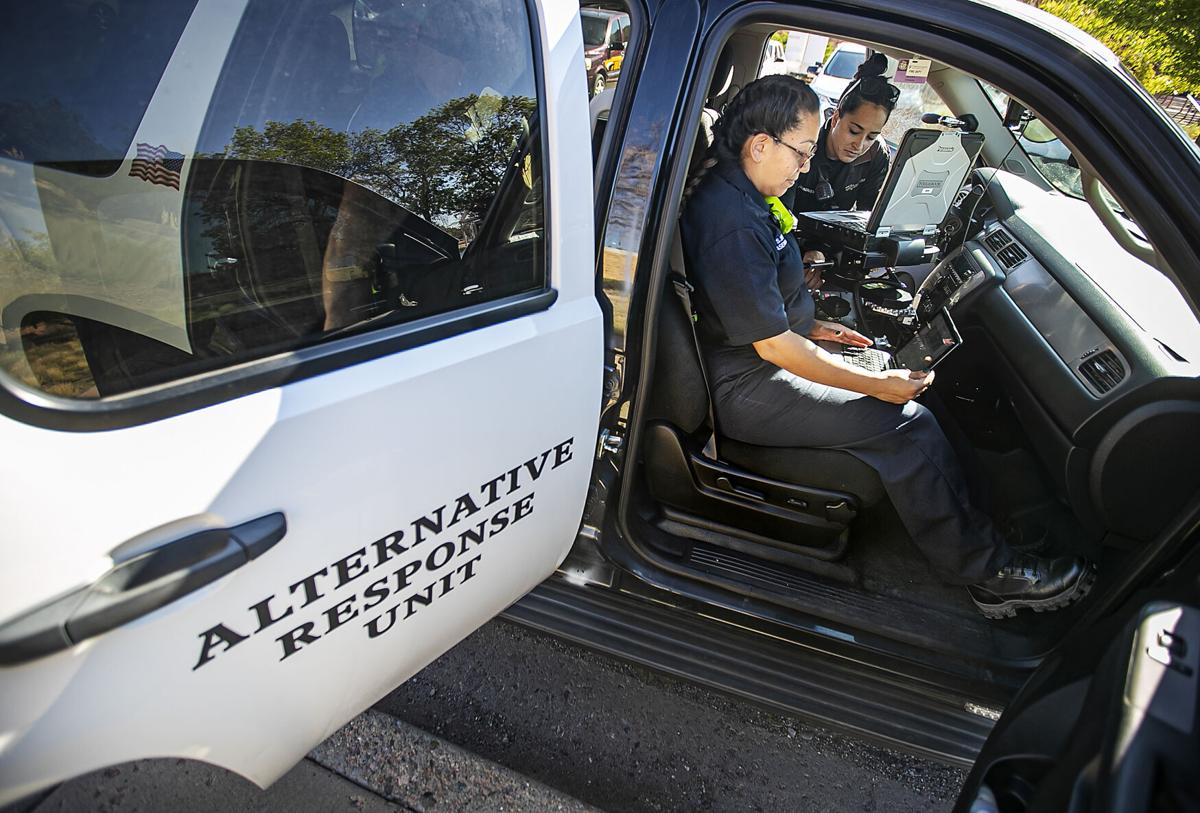 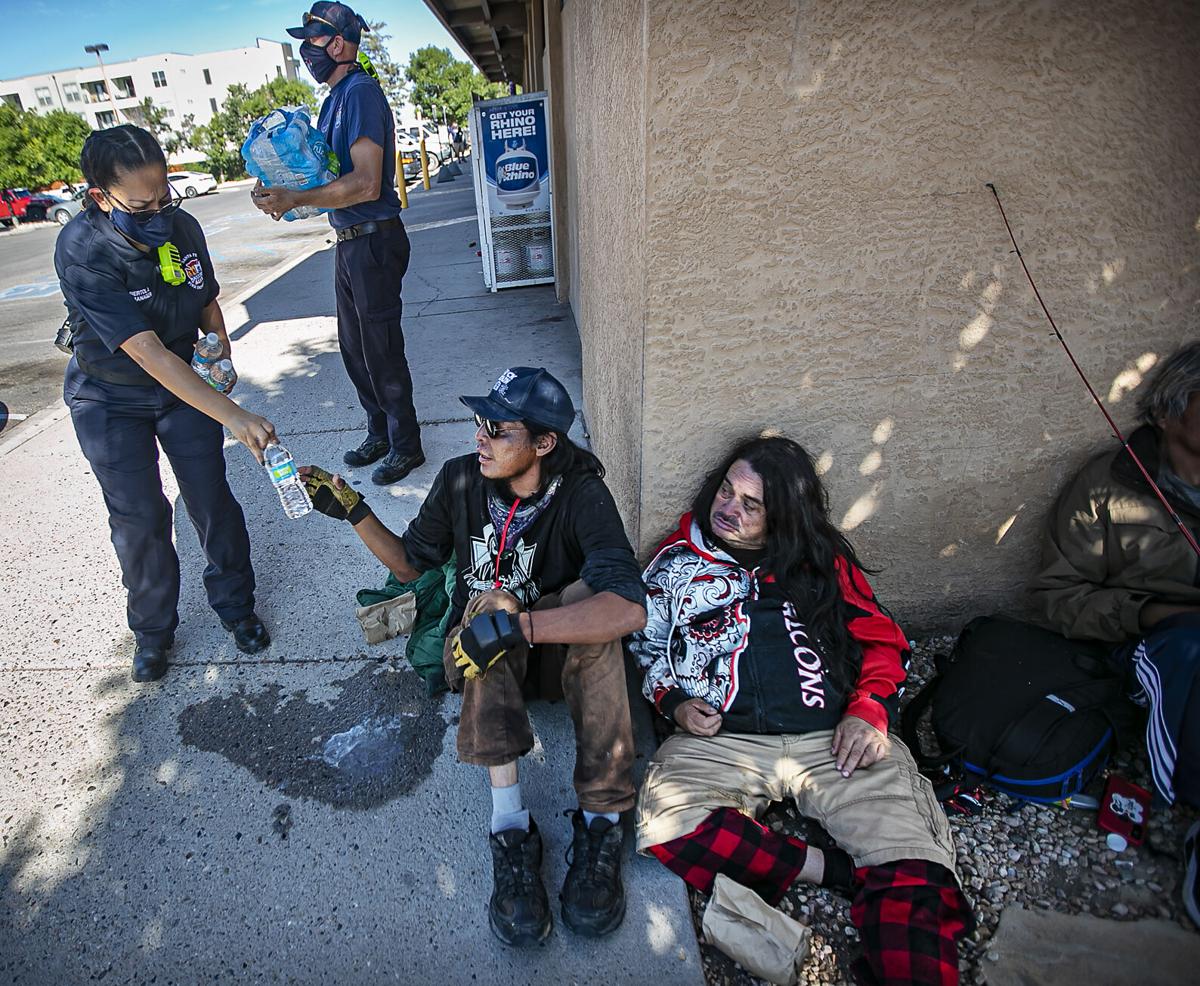 On a recent afternoon, Antoine Mosley was panhandling on Cerrillos Road when the city’s Alternative Response Unit arrived.

The unit includes a caseworker, a paramedic and a police officer who respond to low-threat 911 calls usually related to behavioral health issues. The unit members are trained in de-escalation techniques and often connect people in crisis with mental health and housing services.

Before the city created the unit earlier this year, first responders had three options: Take people to the emergency room, put them in jail or leave them. The ARU offers another option, and it seems to be working so far, city officials said.

After the unit left, Mosley said he felt much better having the ARU respond than law enforcement.

“When it’s police, I think, ‘Oh god, what have I done here?’ But with them, it’s not as threatening,” said Mosley, 52, who has been living on the streets of Santa Fe for over two years. “It’s a lot better.”

Mosley had encountered Bertola before. He said she’s been amazing and is trying to help him get housing through the New Mexico Coalition to End Homelessness.

“Sonia and them are the most help I’ve encountered since I got out of rehab in 2018,” he added.

The city formed the ARU to alleviate the fire and police departments’ workload and help residents struggling with behavioral health issues. Since its launch in May, the unit has been busy.

From May 5 to July 19, it responded to 226 incidents over 26 days. None of the incidents were determined serious safety issues, and an officer was with the team for 169 calls, according to the Santa Fe Fire Department.

Kyra Ochoa, the city’s acting director of community health and safety, told the Human Services Committee in late June that the unit is prepared for whatever it’s sent to do.

“The team was really well trained in crisis intervention, but they’re also well trained in knowing when to call in additional backup by the police department,” Ochoa said.

The unit is still self-dispatching to calls that come into the Regional Emergency Communications Center. It has already helped reduce fire and police call loads, she said.

“They are a small unit as it is, but three days a week is already making a dent and saving time in terms of calls for service,” Ochoa said. “Police don’t have to stay on scene as long, they don’t have to respond to every kind of call that they would normally have to and they’re back in the field sooner.”

The unit plans to measure its success by seeing if patients are getting connected with services they need, such as finding housing, entering rehabilitation programs or receiving mental health care, Paul Babcock, the city’s fire chief, said in an interview.

“We are taking baby steps with this unit, but we’re very satisfied with the progress we’ve been making,” he said. “We want to make sure we’re doing it right.”

Bertola has been a case manager with the city for the past two years after previously working in social service positions in New Mexico. She said the ARU has been the most rewarding job she’s had.

“It makes me happy because it really does make a difference,” Bertola said. “It’s definitely been positive. I see it not just in what we do, but I hear it from other agencies as well.”

On a recent morning, the unit responded to calls of trespassing and public disturbances. The team was able to help one woman set up a medical appointment and encouraged her to move along after receiving a complaint that she was trespassing.

“That’s another great thing about the ARU,” said Brunson, who’s been with the fire department for 20 years. “We’re able to follow up with people, even the same day, and see if they’re getting the connections that they need.”

When it is not responding to calls for service, the unit is driving through Santa Fe offering food, water and support to those they see who may be in need.

Ramos Tsosie, a 47-year-old mobile integrated health paramedic, has been with the city for six years. He said both the Mobile Integrated Health Office and ARU have become agents for change.

“I had three people in the area I was working with as a paramedic almost all at the same time,” Tsosie said. “And all of three of them, within two or three months, died.

“It really just made it so clear to me that just taking them to the hospital wasn’t making a difference in the trajectory.”

The ARU, he said, was a way to identify people in the community who are at risk and provide them with options other than taking them to the hospital or leaving them alone.

Gonzales agreed, saying she often felt as an officer there were few options when responding to low-level violence calls.

“Prior to the ARU, I think our hands were tied,” she said. “When there’s a psych call or someone’s suicidal, we automatically just take them to a hospital because that’s what we were taught. But that may not always be the best for that person, and it might be a traumatic experience.”

“But with the ARU, having a mobile crisis [unit], the case managers are great finding the right resources for that person. But prior to this, we had limited options,” she added.

Ochoa told the Human Services Committee the unit has been a goal for the city for some time.

“One thing we always craved was how to get crisis response to be not an option for officers in the field but actually just something that is done as par for [the] course,” Ochoa said. “By having the ARU as part of the staff, we’ve achieved that.”

Mosley said he has dreams of becoming a pastor one day and had previously taken courses to become a minister.

“Being a pastor is in my family; it’s in my blood,” he said. “I just got to get off the streets.”

Thank you for a much needed service in our community. Hopefully this unit can expand to 7 days a week.

Well over due and can speak first hand as worked in San Francisco with a similar team with similar results. Many Kudos Santa Fe !

Was so excited to see this in Santa Fe. Have read about these kinds of services in other cities. In fact I have a cousin in Kansas working in such a group. She has been with a team for 2 years now. She said it was slow starting but making a big difference now.

Sounds very promising! I dealt with hundreds of such situations in the course of my law enforcement career. This approach will, hopefully, prove very successful. My concern is the vast number of very ill-advised new housing units being built which will dramatically increase the number of "calls for service" for already short-staffed emergency service agencies.

FWIW, I am positively ecstatic about the new housing. It is wonderful that fewer of our residents will have to commute here from afar. In addition to saving time and gas, most of these people will develop stronger attachments to our community than would if they lived elsewhere. Almost every action to make Santa Fe less gentrified and less elite is good.

Nice to see the City and its Fire Dept providing these timely services. 80%+ of 911 calls are medical -- the vast majority are not emergencies. In the old days the FD would roll heavy/equipment to these calls unnecessarily. Nice to see money being saved and, more importantly, people getting better care.

This is a really smart idea. Bravo to the City. It is a feather in the Mayor's cap.

What humane, helpful & caring unit this is. May it grow & continue to help more of those in need.

I’m sure what is concerning to some people of a particular political persuasion, is that a modicum of compassion.is tendered to those in need.

Kudos to the ARU Team. Sounds as though they are doing incredible work on our streets. Best of luck to them. I am hopeful that they continue to grow and help more of those in need.[thumbup]

My concern is that the first time a reponder with ARU is attacked and injured, they will realize Police Officers will have to arrive with them on the call, not be available as "backup if needed".

Sad that is where you go. Just because someone is houseless doesn’t make them violent. The ARU is a much more human solution to providing services.

You might be surprised how many murders and violent assaults occur involving homeless people... They are homeless, but yes they can also be violent .... That's just reality.

Kim, look at it this way, look at all the rational, encouraging, empathetic responses. I'm surprised there's only one fly in the soup, so far. Sure, there surely will be a first time where the situation is read incorrectly and an attempt/success of violence will occur but Emily, the other way is not working. We cannot, if we are going to call ourselves a civilized society or aspire to be one, keep the status quo of hammers vs nails.

This would be amazing if it works. I talk to a couple of women down by the Albertson’s at Zia, a couple of weeks ago. They said they have been kicked out of the tunnel by the police, who were very insulting and chase them off. Someone had broken the lighting in the tunnel. I asked them if they had been vaccinated and they hadn’t. All I could think of to suggest was for them to go to his place. But I have no idea how they would go about getting to Pete’s Place.