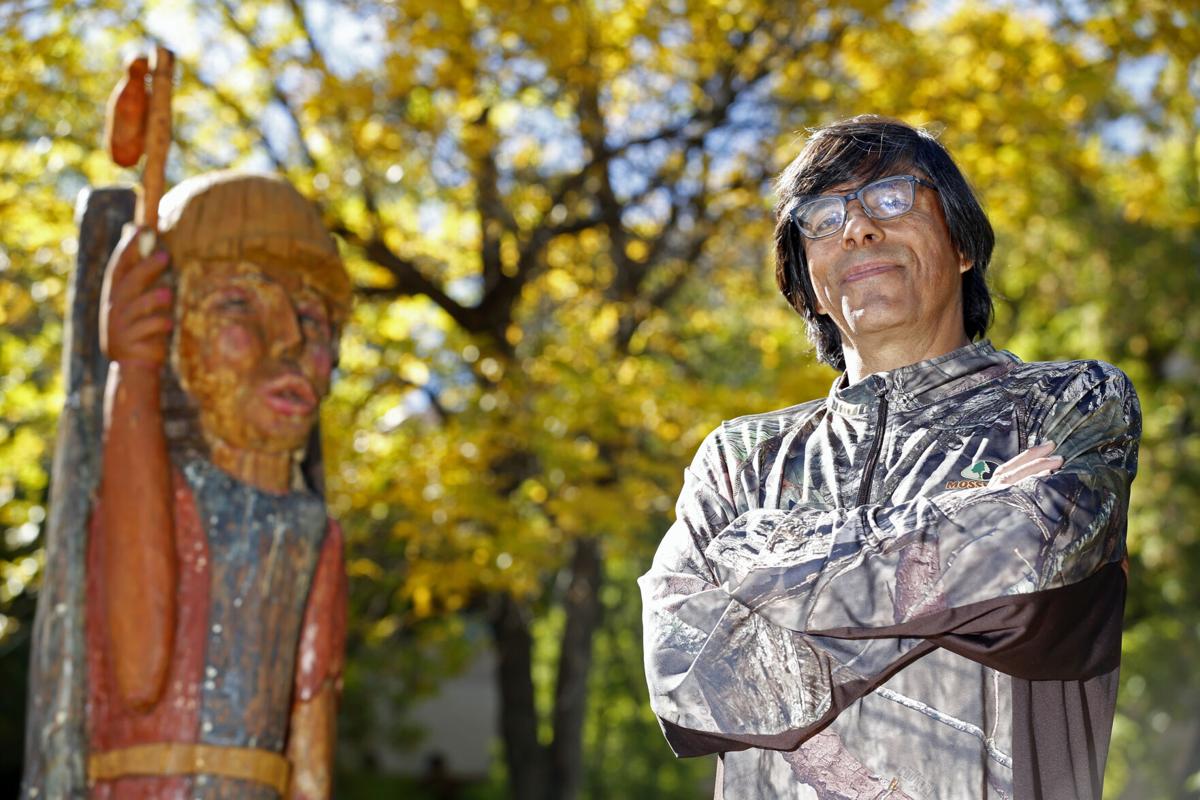 Jose A. Lucero, the ‘Picasso Santero,’ stands next to one of his pieces, Raphael the Archangel, earlier this month on Alameda Street. There are seven angel carvings in total, but one is missing and Lucero wants to replace it. 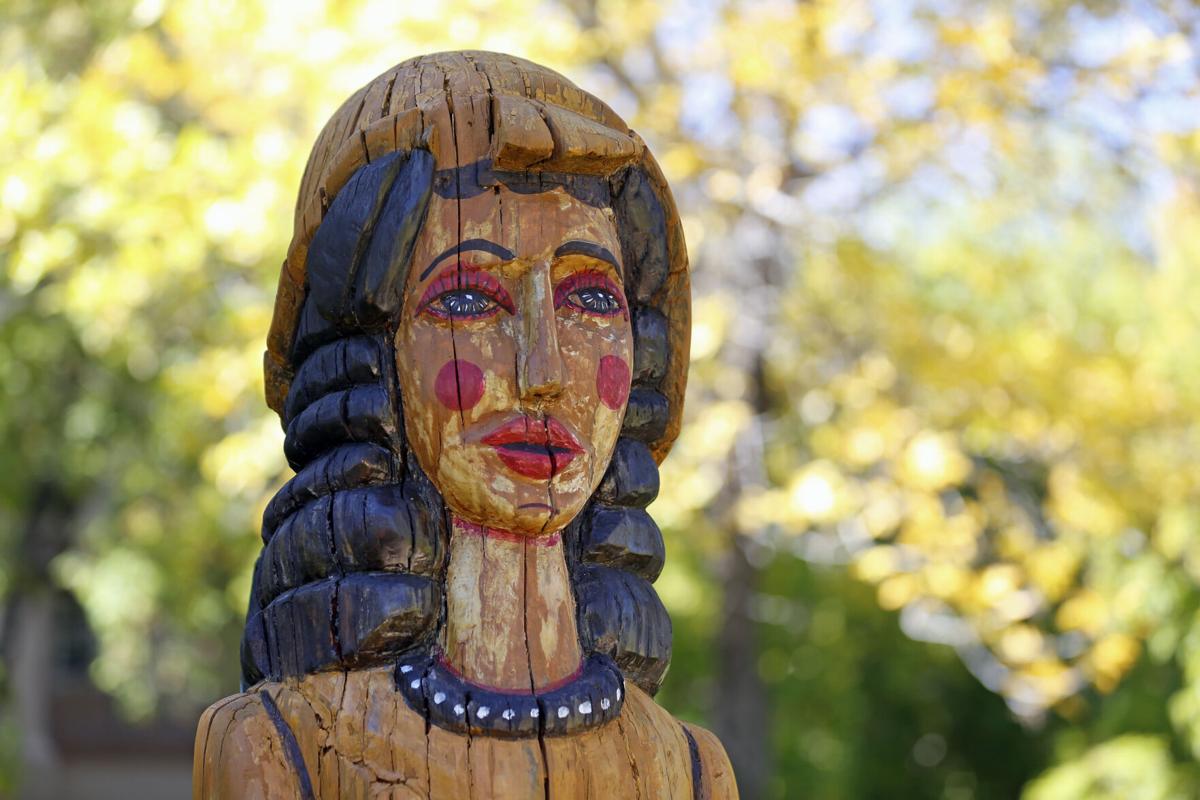 Jehidael the Archangel by Jose A. Lucero stands along Alameda Street. 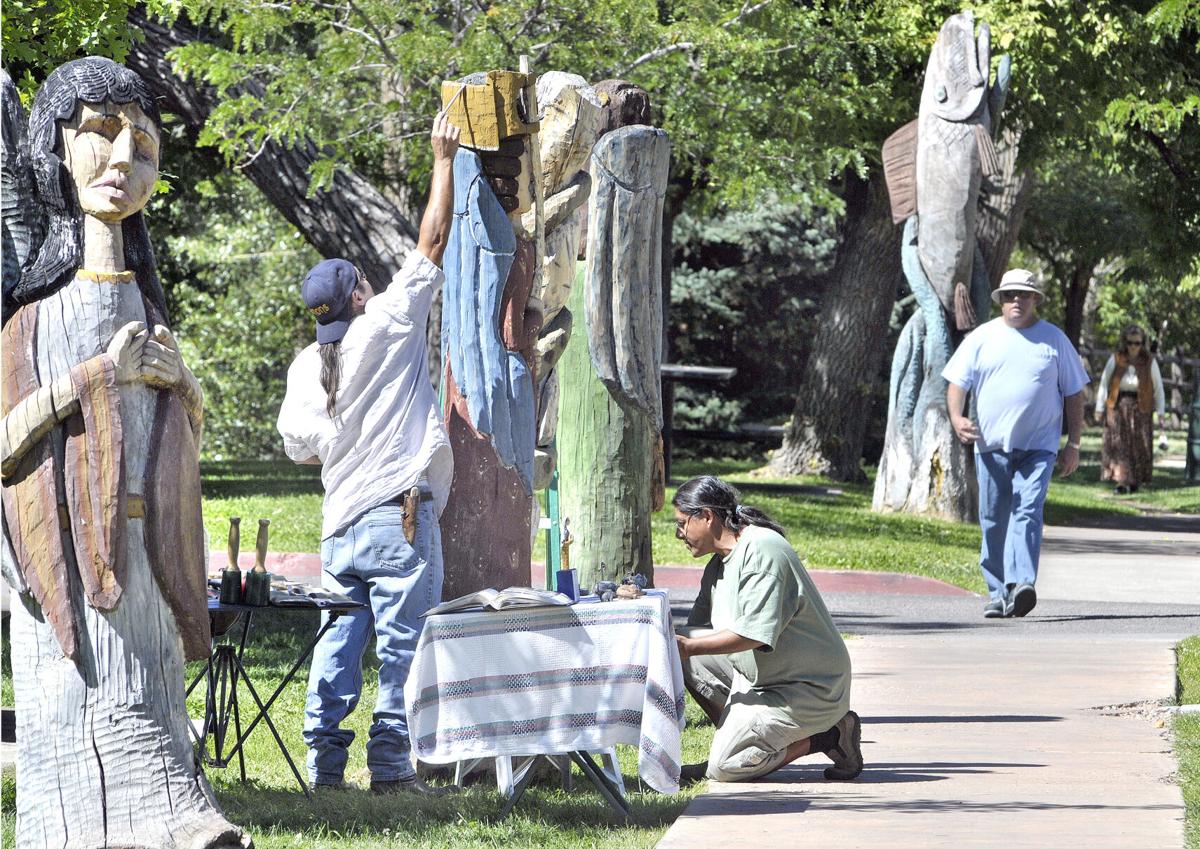 Brothers Felipe and Jose A. Lucero, from left, repair and repaint the wood archangel statues in 2010. One of the angels has fallen and must be rebuilt.

Jose A. Lucero, the ‘Picasso Santero,’ stands next to one of his pieces, Raphael the Archangel, earlier this month on Alameda Street. There are seven angel carvings in total, but one is missing and Lucero wants to replace it.

Jehidael the Archangel by Jose A. Lucero stands along Alameda Street.

Brothers Felipe and Jose A. Lucero, from left, repair and repaint the wood archangel statues in 2010. One of the angels has fallen and must be rebuilt.

What do you do if one of your archangels has fallen?

Carve another one, artist Jose A. Lucero said.

That’s his plan anyway. Lucero, a Santa Fe native known to some as the “Picasso Santero,” designed and created the seven archangel wood sculptures lining the riverwalk alongside East Alameda Street.

The city of Santa Fe’s Arts Commission — now known as the Arts and Culture Department — commissioned the works in 2004 to create wood carvings out of dead and dying trees along the waterway. Lucero was one of many artists who submitted a design and proposal.

“The archangels represent all aspects of our lives — they’re not just about one life or one religion,” Lucero said.

Though Lucero restored the seven works in 2013 and again this summer — resealing, repainting, everything, he said — one of the seven fell over after a storm and broke into pieces. It was Sachiel, who represents success, wealth and water. Lucero sees Sachiel as a contemplative figure, one stopping to reflect on life, be it good or bad.

Lucero has learned to look at life through a different perspective over his 57 years. A Santa Fe High School graduate, he grew up with the teachings of his mother, Victoria Lucero, ringing through his head and heart: “Try to bring joy to people in everything you do,” and “Try it — if it doesn’t work out, you can say you tried it.”

His father, Nabor Lucero, worked for the state Highway Department and made wooden furniture for the family home in his spare time.

“The things he built are still around,” Lucero said of his father, who died some years back.

Lucero and his siblings spent one year in Colorado while their mother pursued a master’s degree. His middle school art teacher there set him on a career in the field, though Lucero did not exactly know it at the time.

“That gentleman put passion in me,” Lucero recalled. “The passion he pulled out of me, well, the art just screamed out of me.”

He got sidetracked by side jobs, including time as a city bus driver and a tour bus driver. In the latter capacity, he drove people to Santa Fe’s historical, spiritual and artistic sites, including state museums. There, he fell in love with the work of the old masters, including those of French impressionist Claude Monet, whose soft colors Lucero often emulates in his own works.

“I was falling in love with art big time,” he said. He began using organic materials like red and yellow ochre he found in the hills around Santa Fe to paint his works.

His early art career was fraught with the expected challenges, and then some. Once, while carrying a wood carving of Our Lady of Guadalupe, he tripped and lost hold of the piece, which smashed into pieces against his truck.

It took a while for him to sell any art until renowned and controversial artist Fritz Scholder came across his work and bought some, giving Lucero a morale boost.

“He bought like 20 of my paintings,” Lucero said. “And my passion exploded.”

He recalls working months on carving and painting the seven archangels out of cottonwood trees some 15 years ago and the joy he got out of having people stop by to talk with him about his vision.

He deliberately staged the angels so some are looking in different directions — several facing the El Castillo retirement community and two facing Alameda — because “I wanted them to face everybody. We all need this kindness and goodness.”

Because the elements had worn away the roots of the trees over the years, Lucero built cement bases for them. Now he’s looking for a fresh piece of cottonwood to carve Sachiel out of.

“Our angels grace our city and have become beloved,” Pauline Kamiyama, director of the city’s Arts and Culture Department, said of Lucero’s carvings.

Lucero hopes people respond. He said one of his biggest pleasures is seeing people stop to admire the angels and take photos of them, sometimes with loved ones standing alongside the carvings.

“I really like watching couples who just got married at the cathedral getting photos taken of themselves by the angels,” he said. “It’s beautiful to see them become part of these people’s lives in a way that they are gonna remember for the rest of their lives.”

Anyone interested in donating to a fund to support Lucero's restoration of the seventh archangel can visit santafenm.gov/culture_connects_coalition.

Hey Gerald Peters step up you can afford to cover all the costs on this one and more.

Mr. Lucero is an amazing human being, and an excellent artist. His heart is depicted in the dedication of the carvings and the meaning each angel has. If we open our eyes 2020 vision we may observe the good from the deeds of this human being.

Why does the city make it so difficult to contribute? Why does one have to mail a check or have to call to give one's credit card info? These days a gofundme is super-convenient and easy. Technology people.

How much can it possibly be for something uplifting in these times? Needs cry out from every headline these days and it seems like there is strife and disagreement at every turn. If readers get a vote, count me in. Thanks for highlighting this and to the artist.

Perhaps the grace and wisdom of the ArchAngels, can inspire us all as we address the replacement of the obelisk with a work of art that is inclusive of all peoples and celebrates what nurtures us, this beautiful land.