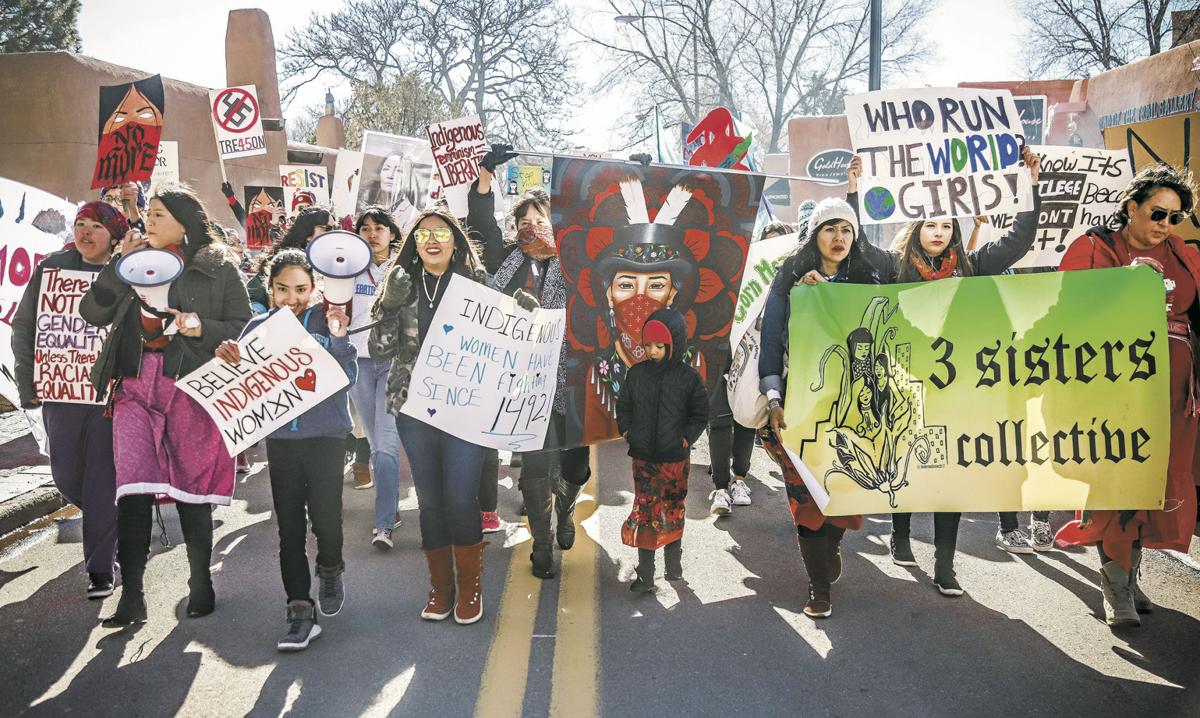 About 2,500 people marched in January 2019 from the Roundhouse to the Plaza in support of human rights issues. 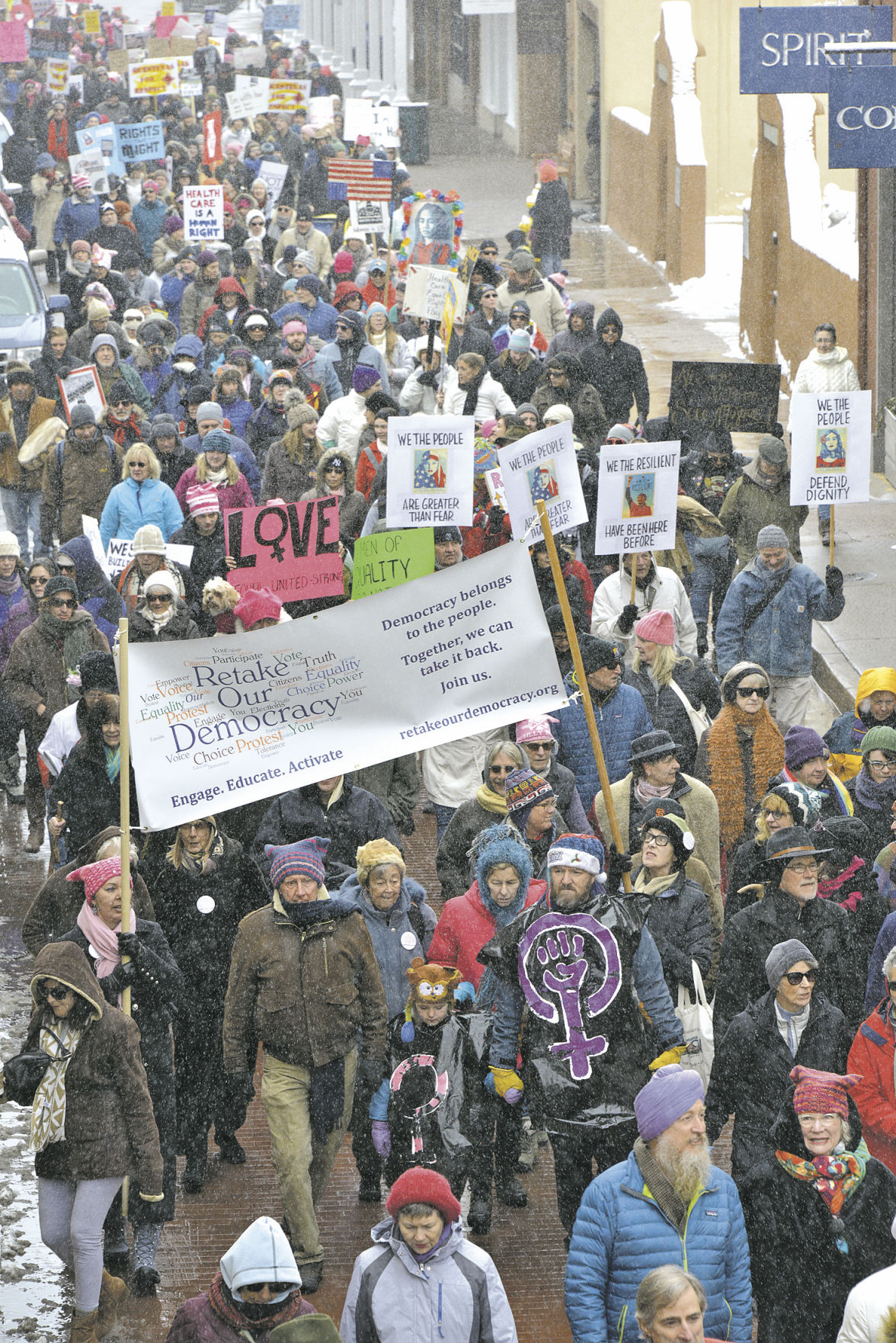 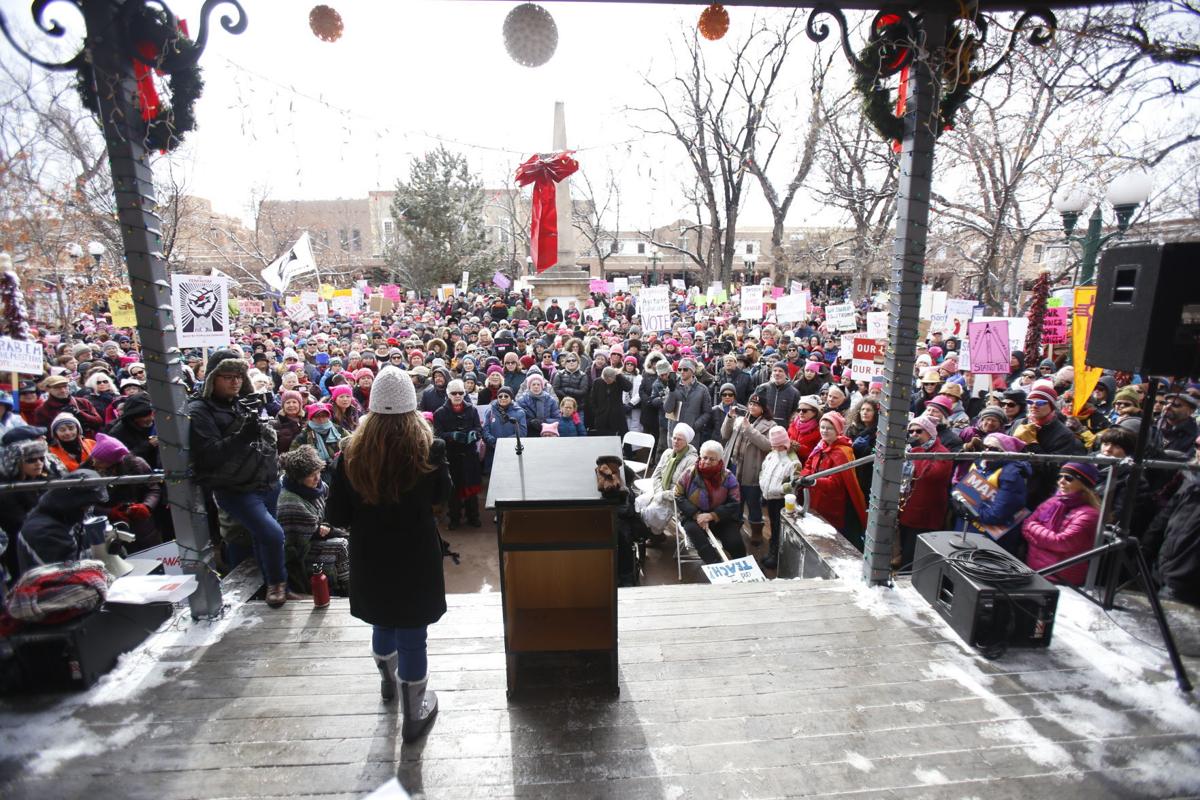 About 2,500 people marched in January 2019 from the Roundhouse to the Plaza in support of human rights issues.

The first thing to know about Saturday’s Women’s March in Santa Fe is that it’s not a march.

Organizers say it will be a rally at a single place — the state Capitol. And while they acknowledge the crowd likely will be smaller than in previous years, they’re adamant that fewer people does not equate to less passion.

“I don’t think the interest is waning,” said Bernadette Vadurro, the lead organizer for the Santa Fe rally.

Vadurro said a late planning start this year meant the Santa Fe County Federation of Democratic Women, the lead sponsor for this year’s event, could not secure the city permits or the $1,800 necessary to pay security for a march. She said she’s anticipating a smaller crowd — between 1,000 and 2,000 — in part because the national Women’s March Inc. did not promote the event.

“We filled out the online form to submit the event, but it hasn’t been posted,” she said. “But I don’t have a crystal ball.”

Vadurro said the focus for this year’s rally is “Women Rising,” referring to women who are leaders and “women empowering each other,” she said.

“We want to highlight women who fight for equal rights, equal pay and reproductive rights — all things that are being rolled back at this point in time,” Vadurro said. “We can’t just stay at home.”

“We want to work in tandem; we want to work together,” Guereca said. “We grew very fast; we all have our different missions and visions and how we see the movement.”

On the financial side, multiple state-based organizers said Women’s March Inc. failed to pay them but leveraged their donors to fund the national chapter, raising more that $2 million in 2018.

Samia Assed of Albuquerque was elected in July to join the 16-member national board to replace the three inaugural members.

Assed, a longtime organizer, said she joined the board, despite “a lot of baggage on its plate,” because she saw the impact of the worldwide protest and opportunities for women who were left out of the conversation.

“I think we’ve set the tone for a lot of movements in the country, really pushed women on the ground to get involved,” Assed said.

She said the board has to improve and continue partnering with organizations at the local level.

“Americans have been trained to think it’s one time and it’s done,” Assed said. “Until we are equal on every standard and every living space and at every working space, we need to march.”

Where: 409 Old Santa Fe Trail, on the east side of the  state Capitol

The women’s march shouldn’t be a partisan event. It’s dissapointing to see the Democratic party take this over and feature a slate of boring old male hacks all trying to vie for re-election. A women’s march shouldn’t just feature politician speakers. Where are the community organizers? The church leaders? The ordinary folks who want to talk about achieving an equal society and not pander for votes. I’m probably not going. It’s an election year, let’s vote these hacks out.

Kinda wondered that too. First three names mentioned are men. Overwhelmingly the speakers are politicians. I expect it to be overwhelmingly from the Left in Santa Fe but what about scientists, engineers, pastors, doctors, everyday people? I would nominate Dr. Wendy Johnson, the medical director of La Familia if I were an organizer. Who knows best about some of the health and social welfare issues facing us than the medical director of a major public clinic?

Ha! These socialists still want to protest Trump by doing silly things like this. Why is it always all about Trump????

Can you say "Madam President"?

LMAO!! Because Mr. Trump is the one destroying our country. What do you fascist loving Republicans have against truth and integrity? Your "president", has been impeached for a reason. Time to wake the he!! up!!