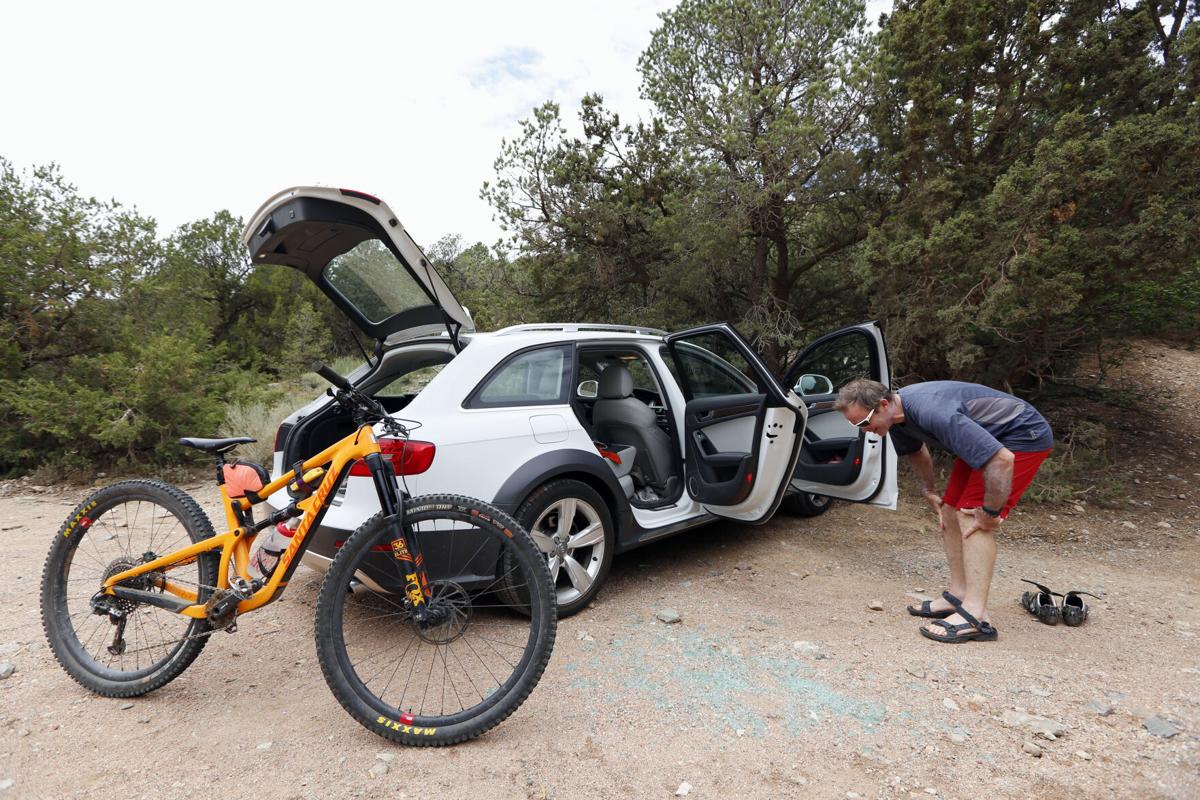 Chris Watson of Santa Fe notices glass from a previous vehicle break-in as he gets ready to ride his bicycle on Cerro Gordo Road. 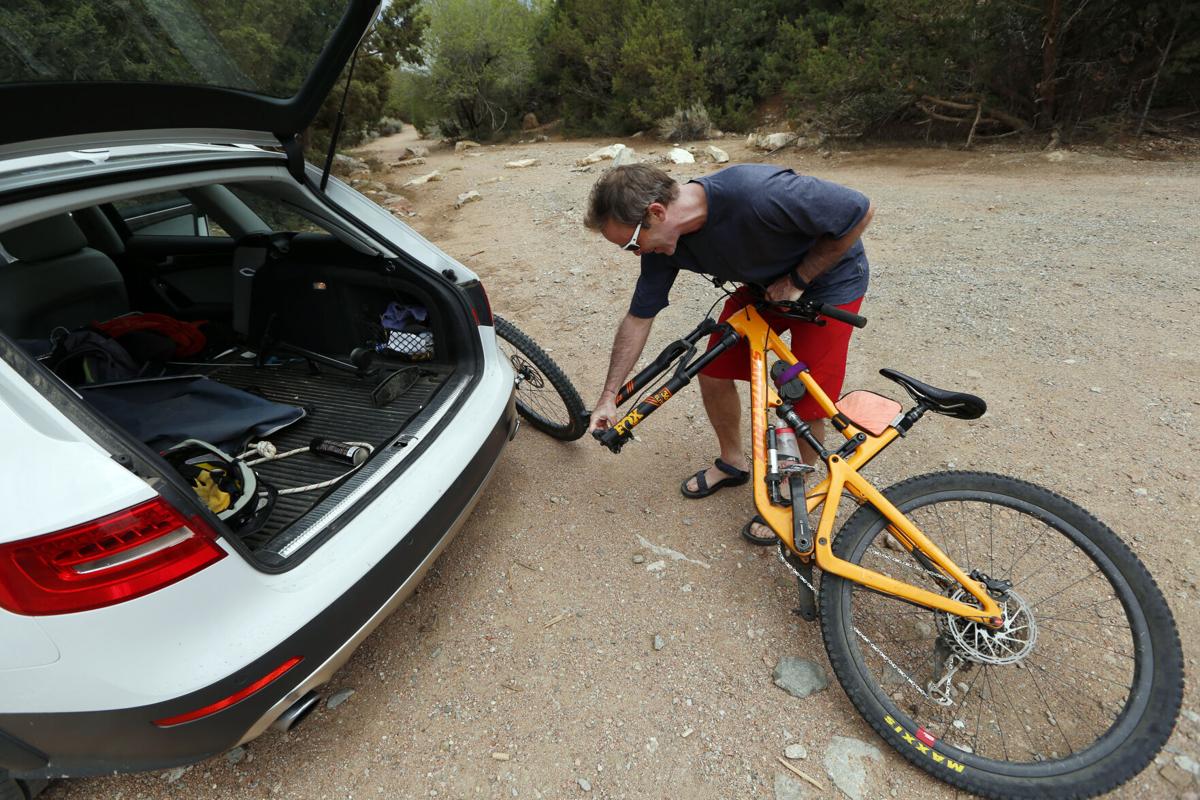 Chris Watson of Santa Fe packs up his bicycle after realizing that he was unloading his mountain bike at the site of a vehicle break-in on Cerro Gordo Road. 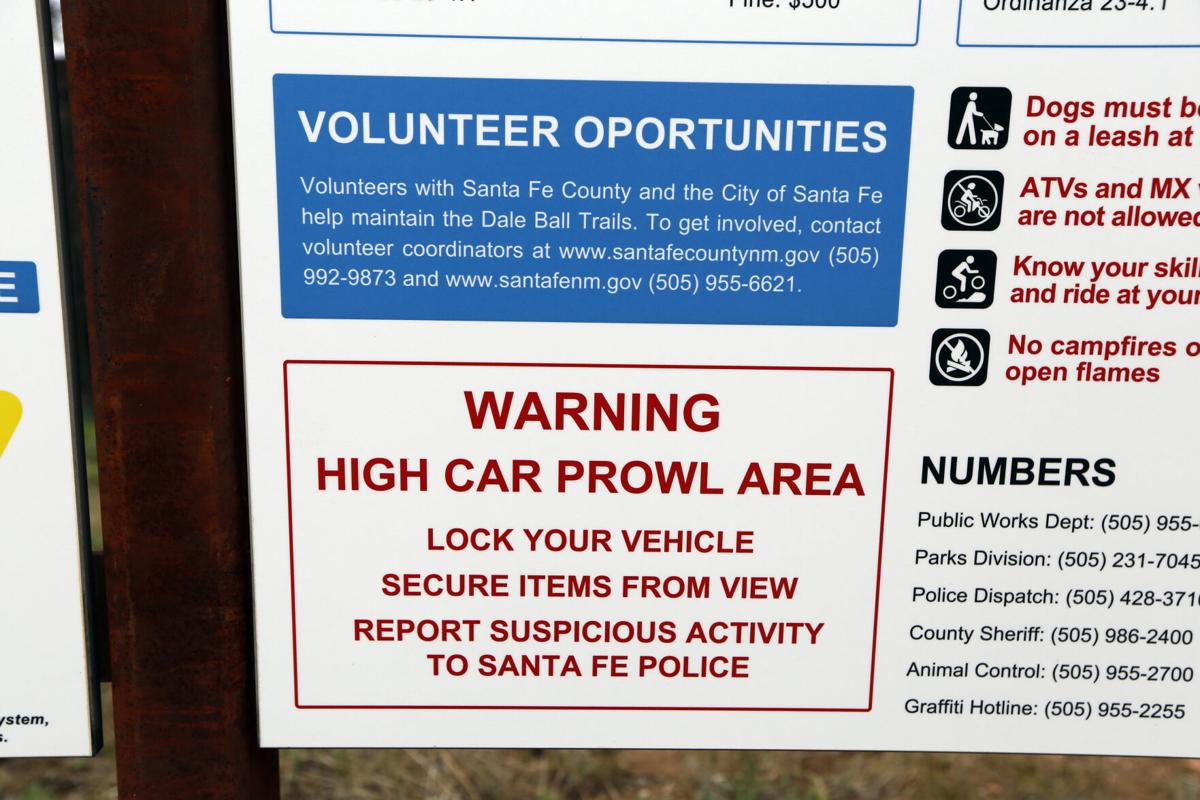 A sign warns Nature Conservancy trail users about the risks of parking in the lot. 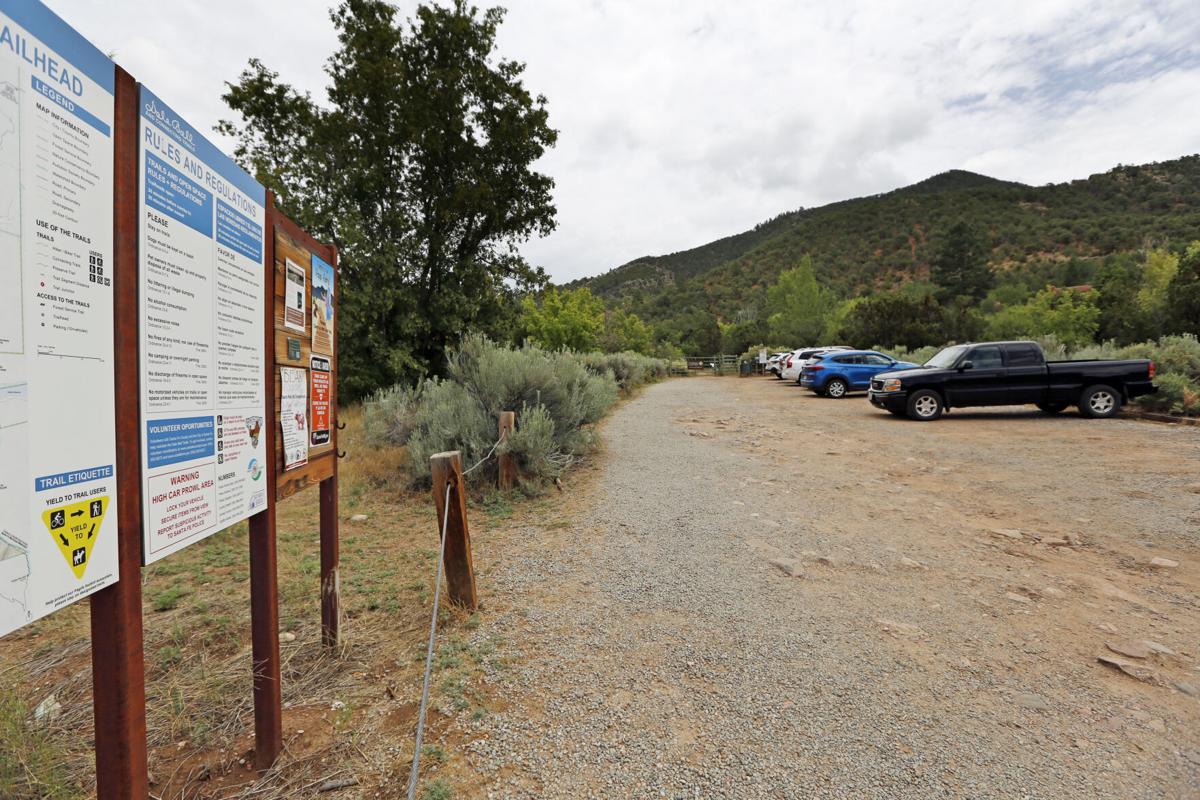 Along with rules and regulations at the trailhead parking lot for the Nature Conservancy trail is a warning about the potential for car break-ins.

Chris Watson of Santa Fe notices glass from a previous vehicle break-in as he gets ready to ride his bicycle on Cerro Gordo Road.

Chris Watson of Santa Fe packs up his bicycle after realizing that he was unloading his mountain bike at the site of a vehicle break-in on Cerro Gordo Road.

A sign warns Nature Conservancy trail users about the risks of parking in the lot.

Along with rules and regulations at the trailhead parking lot for the Nature Conservancy trail is a warning about the potential for car break-ins.

With “pandemic” and “pent-up” virtually synonymous these days, it’s only natural to expect people will be hiking area trails during their free moments.

Criminals evidently know that, too.

Santa Fe police say a variety of burglaries and damage to cars parked near trailheads have been reported in recent weeks — prompting warnings of caution to those headed toward the outdoors.

At least two people had their cars broken into at trailheads off Hyde Park Road last weekend, resulting in more than $1,000 in damage.

One victim, who asked to not be named, said his was the only car parked at the Nun’s Corner Trailhead on July 24. His vehicle was broken into between 6 and 8:30 p.m.

Though the burglar damaged the outside of the car, the man said, nothing of great value was taken.

“What they did was go through my center console and my glove box and raided it,” he said.

The victim said windows were broken and a tire was punctured, and he estimates it cost $1,100 to repair.

The next day, around 5:15 p.m. July 25, a similar incident occurred near the intersection of Paseo de Florencio and Cerro Gordo Road.

According to a Santa Fe Police Department report, a passerby called police when he saw a man get out of the driver’s side door of a black Honda CR-V.

The caller told police he heard the sound of glass breaking and approached the vehicle while yelling at the man, who then got into a truck and drove away, according to the police report.

He suspects the truck was a construction vehicle due to the number of green marker posts in the the cargo bed, Chavez said.

The man left a rusted pipe on the driver’s seat of the victim’s car, but according to a police report, fingerprints couldn’t be obtained.

The vehicle’s owner told police her vehicle registration was missing from her car, which contains her home address, according to the report. Nothing else was taken.

Later that same day, a person called police to report a man in a truck checking for open car doors in an area less than a mile and a half from the site of the Honda CR-V break-in.

According to a police report, the man was able to open three vehicles and stole items worth an estimated at $900, including fishing and hunting equipment.

No other damage was reported.

On the Northside, they are likely committed by the same folks as on the Southside. If Santa Feans REALLY cared about cleaning up their shitstorm of a city, they would MAXIMIZE funding to the police, keep criminals in jail and vote for leaders who are truly out to protect the taxpaying citizen as opposed to catering to whatever aggrieved minority is at their door demanding "justice and equality" People like Kathy Fish reap what they sow....

Stop saying that. You're oversimplifying a complex discussion, and anyway, the police have nothing to do with this. They weren't there for the break-in, and so far, they seem to have no leads. What could does more police do? Are they meant to sit and wait at trailheads? The issue here is an economic one, and perhaps defunding the police - and moving money instead towards jobs, education, and healthcare - could be more effective at solving the problem.

Cameras also seem like an obvious deterrent/solution but...ehh easier to do nothing I guess.

Curbing this seems like an easy way for SFPD to build much needed support in the community. But in my experience, they don't lift a finger to investigate anything but the most serious crimes and lose evidence when they do.

With the police department being so aware of so many break ins whether cars or homes why aren't they patrolling the town more and using their spotlights at night to patrol neighborhoods? If the thieves see the cops around more at all hours they'd be more likely to think twice (I would hope).

This is not a new phenomenon. Trailhead break ins have been a problem for the last 15 to 20 years. They are easy pickings for our local criminal element. Break ins there are very steady, although we do see significant spikes every 2 or 3 years that usually coincide with the release dates of our career criminals. Why they don’t put security camaras at the trailheads is beyond me. It would make identification, capture and prosecution of these criminals so much easier. In theory, it could help curb the problem. But frankly, nothing is going to help until our judges start handing down meaningful sentences for all these serial burglars.

Numbers, and all were engraved with my info

To the detective, name, address, social of the disgruntled ex employee who said once, if you want to ever get even with your boss, take it out on his dog

The detective told me to look at the flea market, he (The detective ), was Later arrested in an underage sting at a local hotel fir soliciting ex with a minor on a chat thing .

I can't help but notice that when white folks' cars get broken into in the North Side of town, the New Mexican writes an article about it. What about the break-ins en masse here in the South Side? Parking lot pavement is frequently speckled with shattered glass, but I never see that addressed anywhere. When I was broken into outside the Savers, it took so long for the cops to show that I finally gave up and went home. Middle of the day we're talking. Meanwhile, folks with expensive bikes in pricey cars with fancy rims get a dedicated article. All of speaks, I think, to the larger equity issues, often ignored, between the North and the South sides of town, amplified by our current mayor's strong preferential treatment for those inhabiting the former.

Do we actually have data on the frequency of break ins, or just complaints? Plus, it will probably get worse before it gets better with so many people throw out of work by the Governor's orders.

Actually, its "so many people thrown out of work because of the highly infectious virus that to-date has no vaccine."

And so many people have neither jobs or health insurance.

So the thieves are racist or Fish lives don't matter?

For those thick-headed readers, the issue is that coverage of crimes against the white and the wealthy is far more comprehensive than coverage of and attention to crimes in the South Side/POC/less wealthy victims. Make sense now?

Remember when a mom found a gun case and loaded magazines in a public park on the south side and SFPD took two hours to show up? Still waiting to hear back from Chief Padilla on that one.