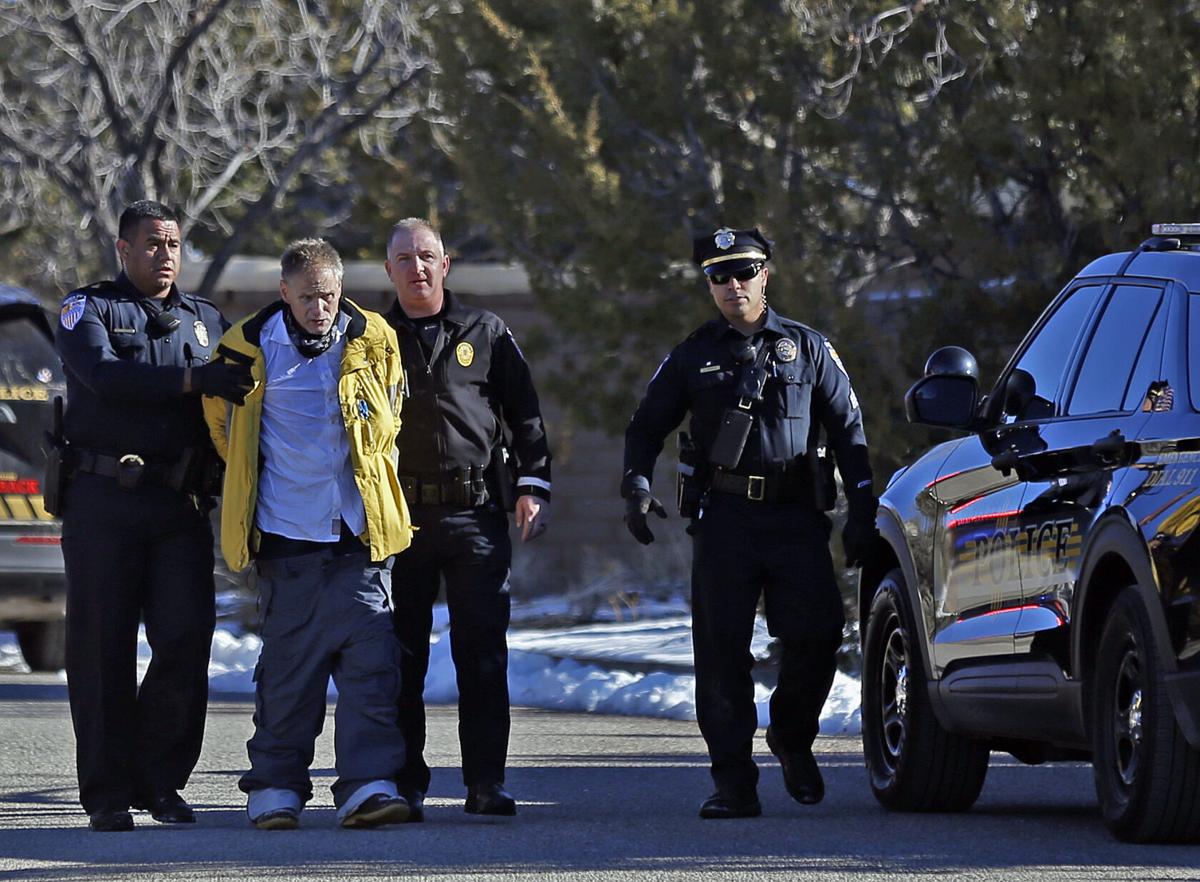 ABOVE: Santa Fe police take a man into custody Friday while responding to a report of a break-in on Piñon Road. The suspect, Jeremy Catanach, was not armed and was booked into the Santa Fe County jail. 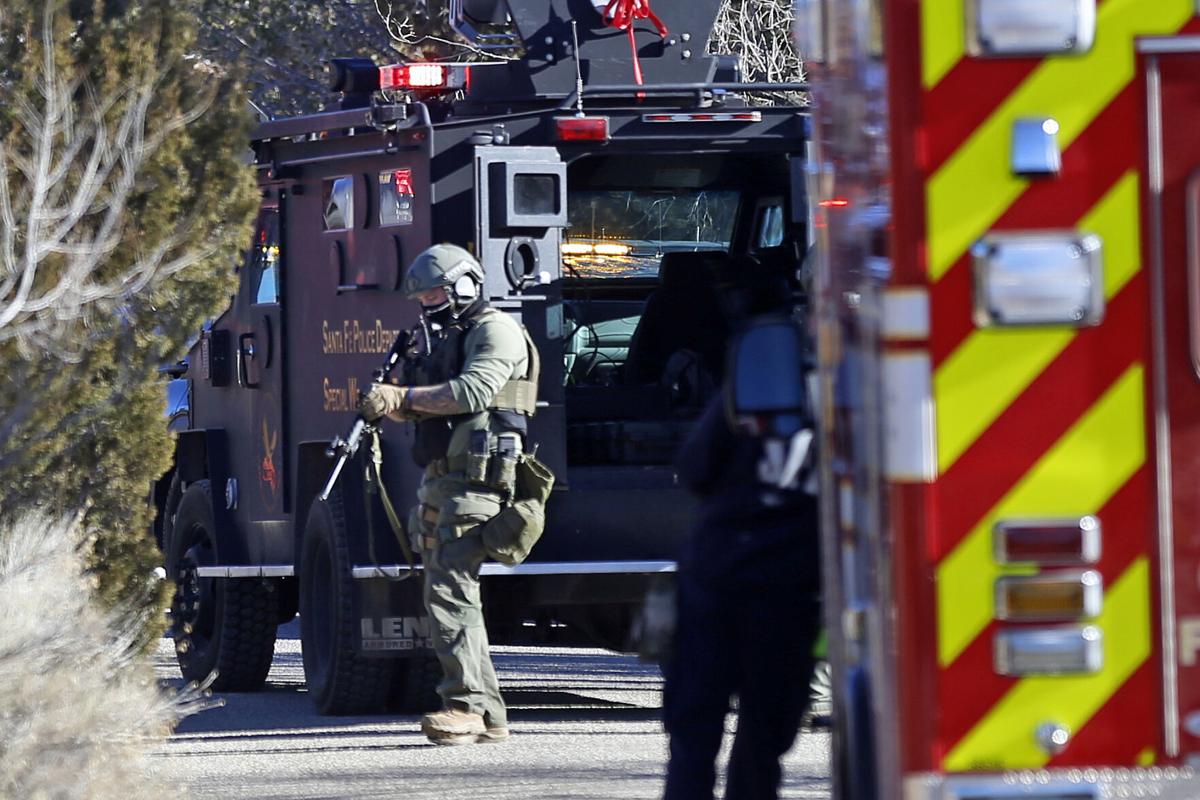 RIGHT: Police officers respond to a report of a break-in Friday after the homeowners said the burglar was still in the house. 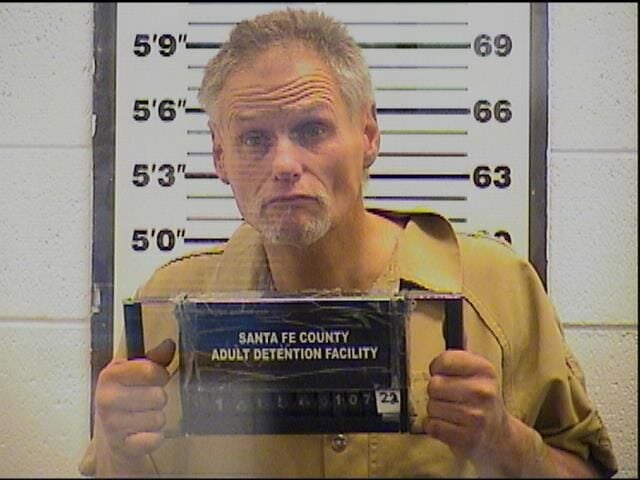 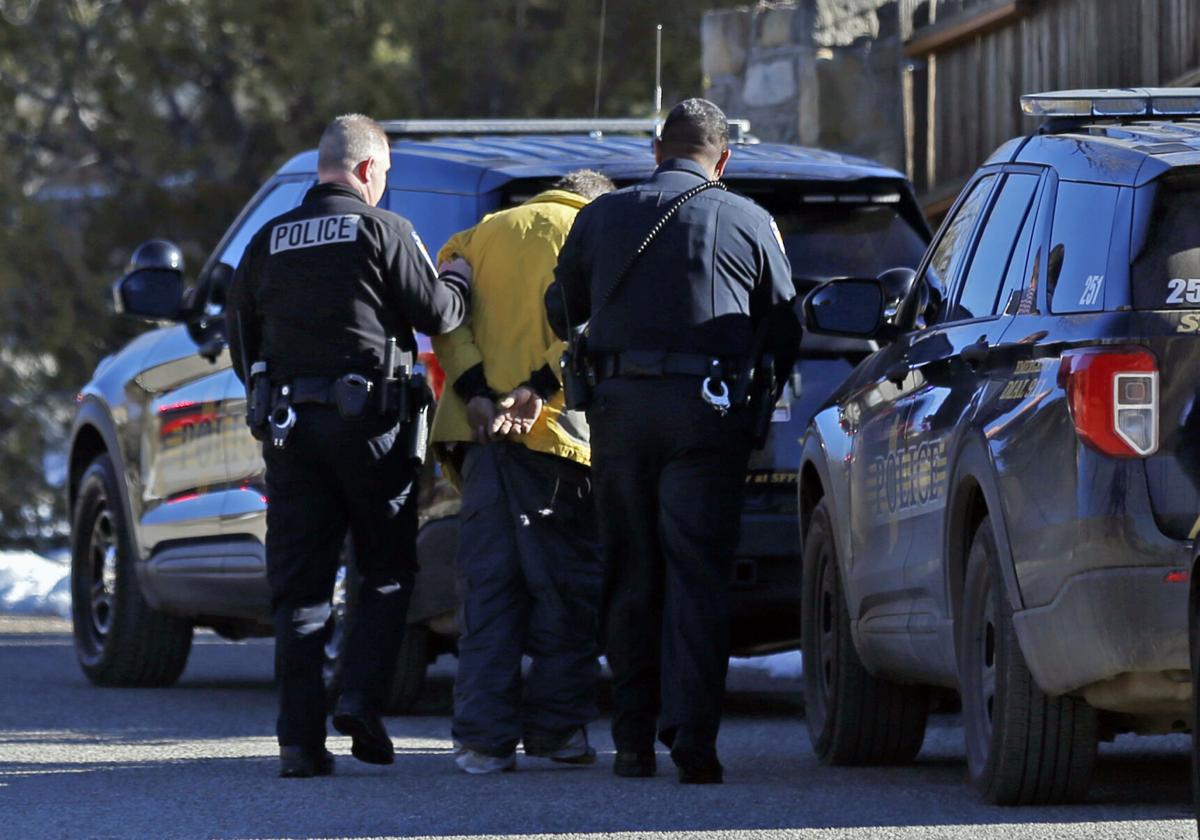 Santa Fe police take a man into custody Friday while responding to a report of a break-in on Piñon Road.

ABOVE: Santa Fe police take a man into custody Friday while responding to a report of a break-in on Piñon Road. The suspect, Jeremy Catanach, was not armed and was booked into the Santa Fe County jail.

RIGHT: Police officers respond to a report of a break-in Friday after the homeowners said the burglar was still in the house.

Santa Fe police take a man into custody Friday while responding to a report of a break-in on Piñon Road.

Santa Fe police called the agency’s SWAT team Friday morning to a home on Piñon Drive after a man suspected of burglary barricaded himself inside, Lt. David Webb said.

Officers responding to a report of a burglary in process just after 9 a.m. Friday in the 700 block of Piñon Drive discovered the suspect, 50-year-old Jeremy Catanach. Webb said Catanach refused to leave the home, prompting the SWAT operation.

Catanach eventually surrendered, however, and was taken into custody on charges of residential burglary, criminal damage to property and resisting, evading or obstructing an officer, Webb said.

The home’s residents were not present when the incident occurred.

Witnesses in the house next door said they saw SWAT officers behind their vehicles with guns drawn during the operation, speaking to the suspect through a bullhorn.

A cellphone video taken by a witness recorded police saying, “We have the location surrounded. Occupant inside — we need you to come out through the front door with your hands up and empty.”

The homeowners had called 911 after observing the suspect in their home remotely through their surveillance system, Webb said, adding the suspect might have entered through a window.

Catanach, who was not armed, was booked into the Santa Fe County jail.

I wonder if he is a member of the huge Catanach family that lived on Piñon Drive back in the 70s and 80s.

Does it matter? If so, find a Catanach and ask.

I'm so sad to see that actor Harrison Ford has turned to a life of crime! Why send a SWAT team to a residential burglary when there are no weapons involved?

So you had a crystal ball, Dan, and knew in advance he was unarmed? Maybe you ought to put on a badge given your exceptional prescience. The P.D. could definitely benefit from your talents!

How do you know they are unarmed, isn’t there knives in every house or blunt instruments just because they don’t carry one in doesn’t mean they can’t find something that will kill inside.

I see 15 mugshots for this clown dating back 20 years. He's one of the many repeat offenders wandering around Santa Fe while the DA and judges do nothing to keep citizens safe. I'm sure he'll get yet another slap on the wrist and a stern warning from our judicial system. Enough is enough. Lock him up and keep him there.

Yeah. Pretty entertaining until the same fool appears in your backyard!

No one should look like that at fifty. This guy needed help turning his life around. If he actually would accept help.

I only hope he gets what he needs and deserves.

A few years back MacKenzie Allen wrote a really good MyView on residential burglary. The gist of it was that it is treated like a nonviolent offense by the legal system but that anyone who has come home to a ransacked, burglarized home feels incredibly violated and vulnerable. Not to mention, a botched burglary can easily turn deadly. Back in Rochester, NY, a college classmate of mine was stabbed to death when she surprised a burglar in her home.

It's similar to drug dealers (who are often packing heat) being called "non-violent offenders" who should not be incarcerated....except that those same upstanding citizens are involved in thousands of gang related turf war shootings every year.

[thumbup] they’re only non violent until their cornered then the shoot you, they carried a gun for a reason.

Yes, that was an excellent write up by Mr. Allen. Another case in point is the murder of Robert Romero in 2018 during an attempted burglary.

Susie Schwartz story below. She was a classmate of mine and we both started out in the same classes as bio majors; I still remember her face.

This murder happened a few blocks from where I was living, in one of the less expensive off campus areas near the University. As the story says, there were several homicides about that time. I went home to my parent's house and fetched my shotgun. Funny, but I got pulled over by the NY State police with my shotgun shock corded to my motorcycle riding back to Rochester from Buffalo. All the Trooper wanted to see was whether I had insurance and a motorcycle endorsement on the driver license.

I imagine by the time I am reading this, a judge has released him on his own recognizance.

He’s having drinks with friends planning the next caper.

At least he wasn't armed. I'll give the old guy that much.