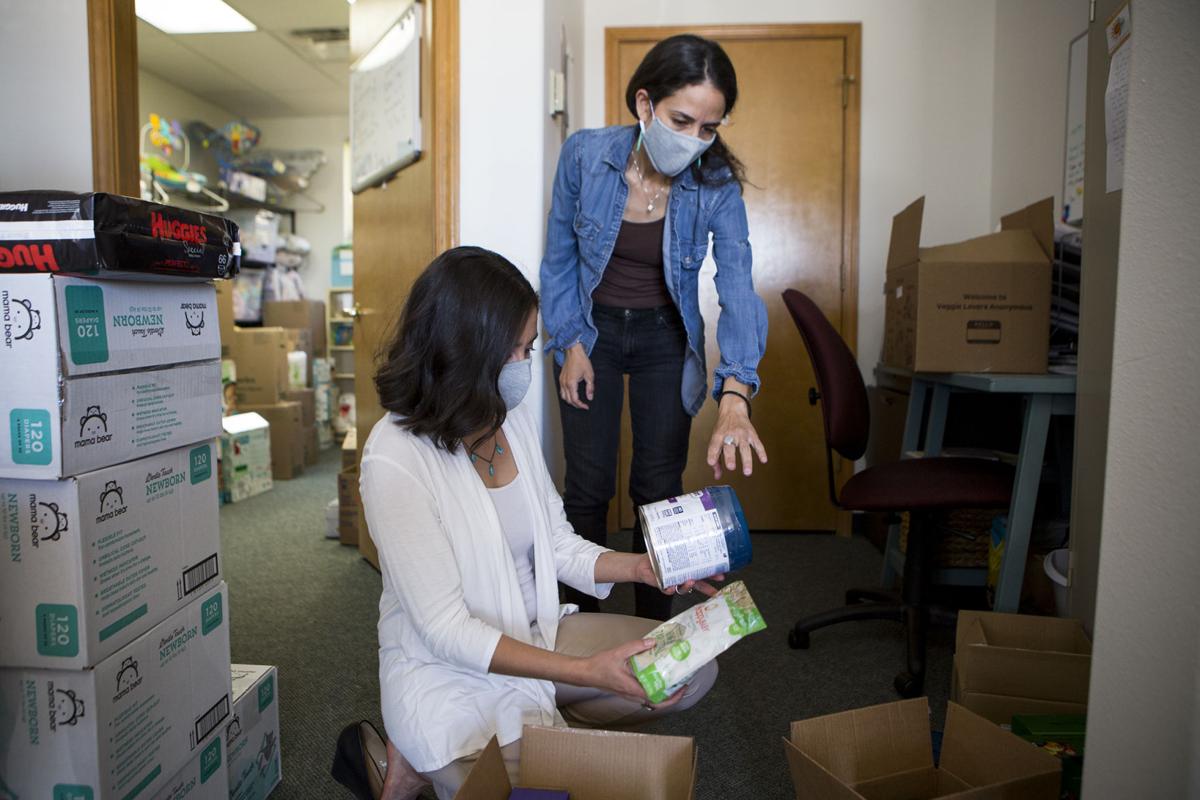 Anita Castillo, volunteer coordinator for Many Mothers, and Antoinette Villamil, executive director, sort Tuesday through baby formula and other supplies they distribute through care packages for new mothers. 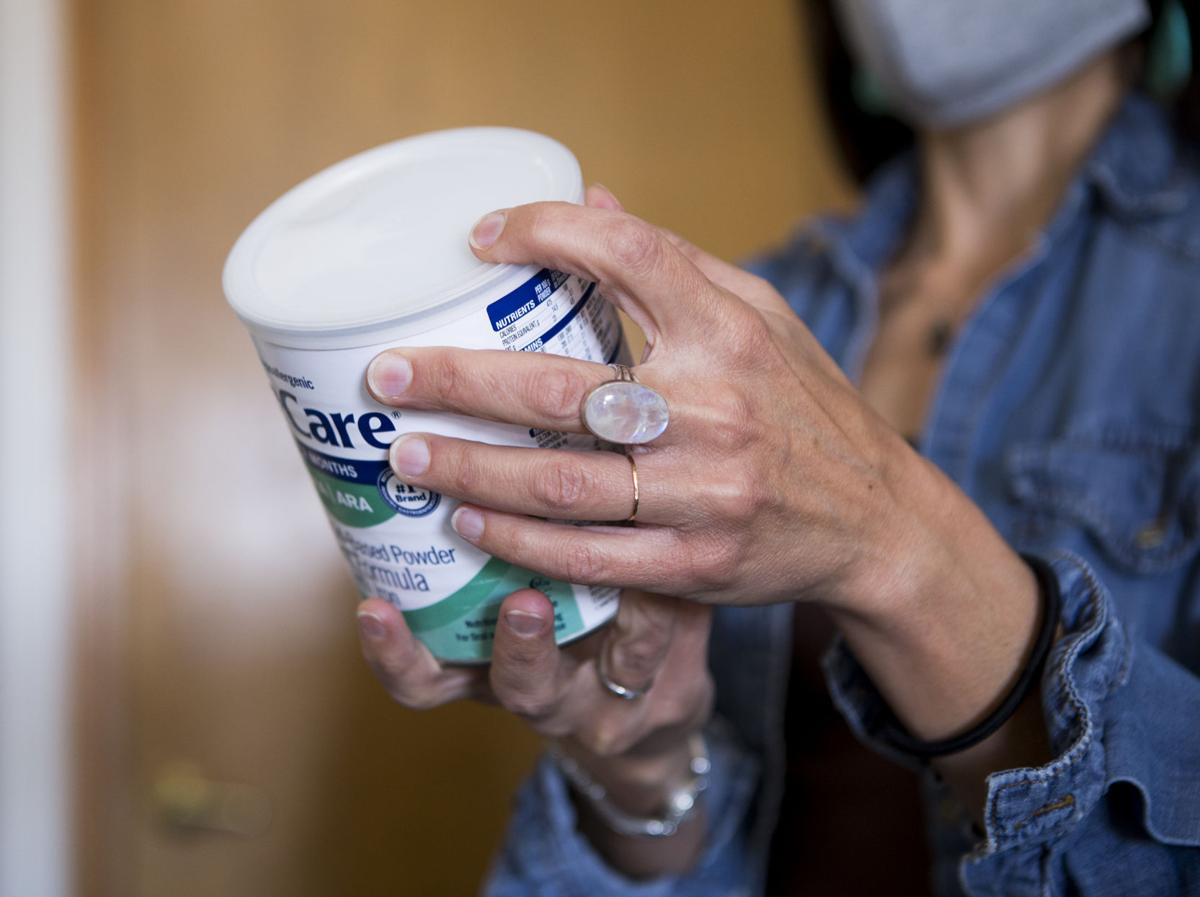 Antoinette Villamil, Many Mothers executive director, looks at baby formula she has included in care packages for new mothers. 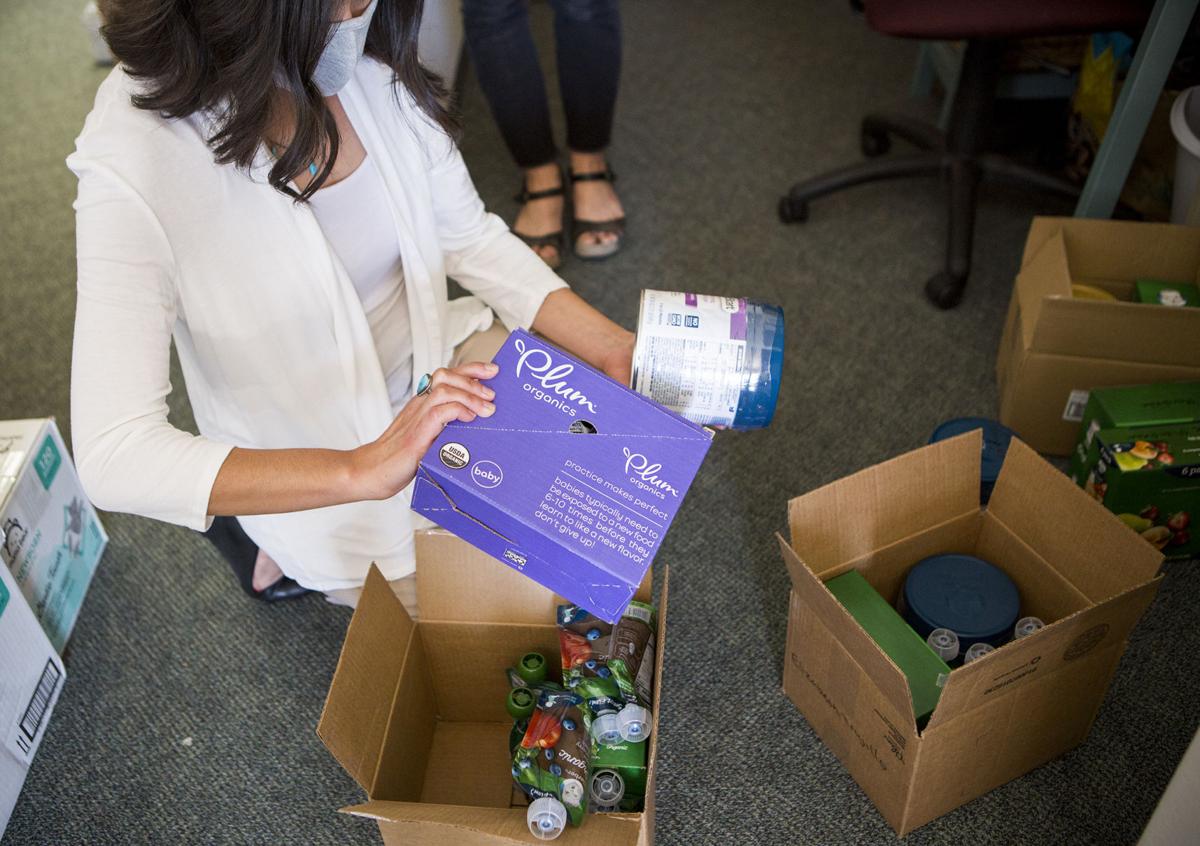 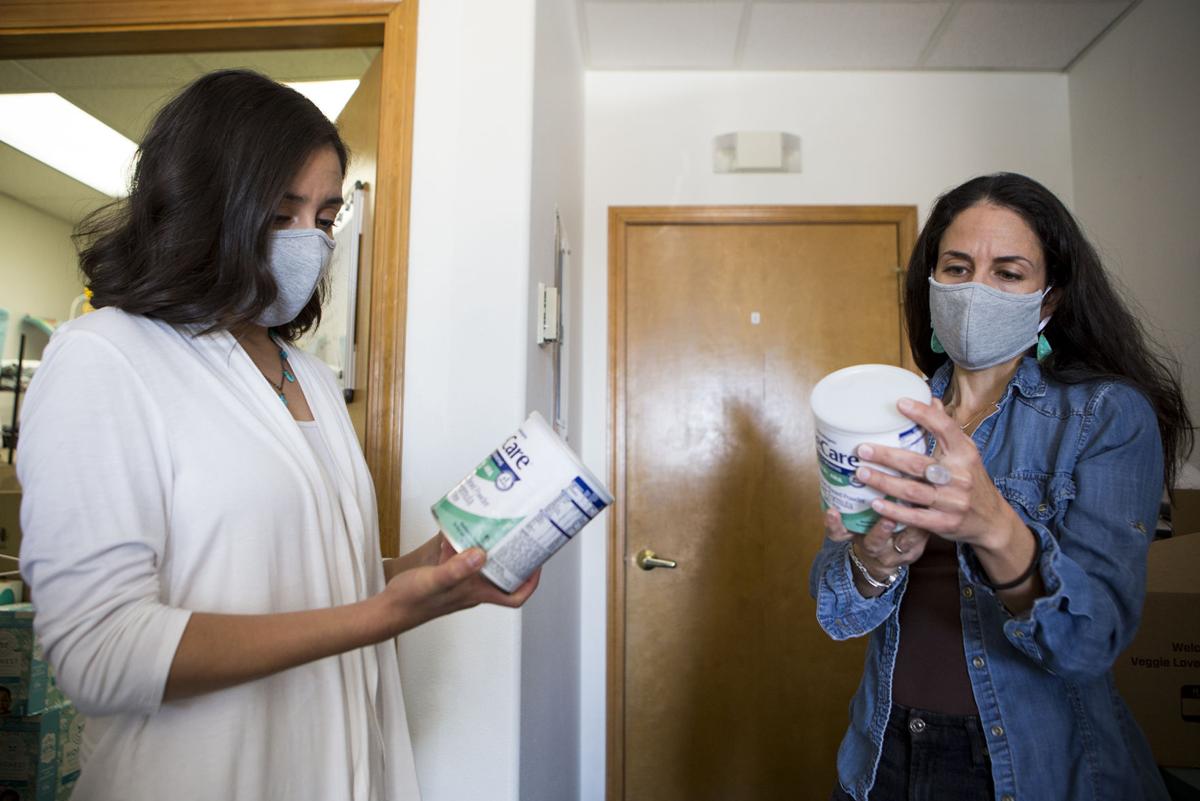 Anita Castillo, volunteer coordinator for Many Mothers, and Antoinette Villamil, the organization's executive director, sort through baby formula and other supplies they distribute through care packages for new mothers on Tuesday May 5. Olivia Harlow/The New Mexican 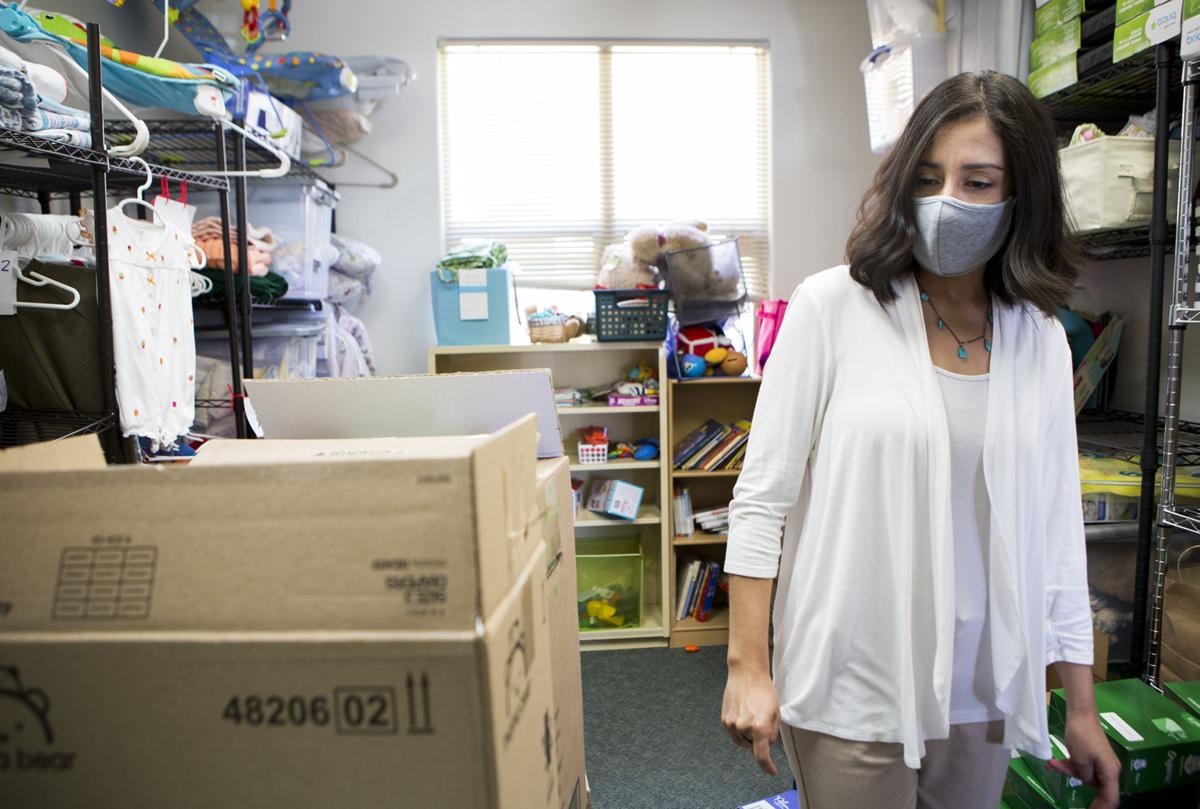 Anita Castillo, volunteer coordinator for Many Mothers, looks through supplies in the organization's closet of supplies on Tuesday, May 5. Olivia Harlow/The New Mexican

Anita Castillo, volunteer coordinator for Many Mothers, and Antoinette Villamil, executive director, sort Tuesday through baby formula and other supplies they distribute through care packages for new mothers.

Antoinette Villamil, Many Mothers executive director, looks at baby formula she has included in care packages for new mothers.

Anita Castillo, volunteer coordinator for Many Mothers, and Antoinette Villamil, the organization's executive director, sort through baby formula and other supplies they distribute through care packages for new mothers on Tuesday May 5. Olivia Harlow/The New Mexican

Anita Castillo, volunteer coordinator for Many Mothers, looks through supplies in the organization's closet of supplies on Tuesday, May 5. Olivia Harlow/The New Mexican

It’s not easy being a mom in the best of times.

During a global pandemic, officials with Many Mothers say, raising a baby is perhaps harder than ever.

The local nonprofit, which provides support for parents following a new birth or after adopting an infant, is working to assess clients’ evolving needs amid the public health and economic crisis and is trying to provide the essentials.

Many of the group’s clients are now struggling to pay rent and buy food for their children after being laid off from their jobs or furloughed.

“We’re just figuring out what we can do,” Villamil said.

The group has been distributing care packages filled with items such as baby food, formula, diapers and wipes.

Before the pandemic, Villamil said, the organization was giving out similar boxes, most filled with diapers, once a month to about 10 or 15 families. Now it’s offering a more diverse array of goods to between 35 and 40 families in a drive-thru system twice a month.

Each distribution round lasts three days, she said.

Given how expensive some of the essential items are — one can of hypoallergenic infant formula costs $46 and lasts only three days — it’s critical to maximize funding toward the effort, Villamil said.

Eventually, she’d like to open the drive-thru service to the entire Santa Fe community — and maybe even offer a delivery option. But first, she said, she must be sure there’s enough staff and funding for the project.

“We’re going to slowly grow based on availability,” Villamil said, adding the organization has received generous funding in recent months and plans to hire at least one more employee in June.

In the meantime, “If they reach out to us, we’re not going to turn them away,” said Anita Castillo, the organization’s volunteer coordinator.

Although Many Mothers has never operated as a crisis support organization, Castillo said, there have been recent instances in which it has responded to client crises.

Castillo, who was hired part time just three weeks before Gov. Michelle Lujan Grisham called for statewide shutdowns, recalled receiving an email titled “Help” from a client a couple weeks ago, saying she couldn’t afford to pay rent after being furloughed. Fortunately, Castillo said, Many Mothers had funding available to help.

Villamil spoke of a mother who texted her late one night, saying she didn’t have any food and lacked transportation to get to a grocery store. Villamil began looking through her own pantry for goods, stopped by a local store and drove to the woman’s home with baby food, formula, oatmeal and beans.

“We don’t want to get in the habit of doing that because we don’t have the scope,” Villamil said.

But she also recognizes new parents are vulnerable and might not have anywhere else to turn.

“So many families were hanging on by a thread [before the pandemic], and now that thread has been cut,” she said.

“I worry about the long term,” added Castillos. “Everyone is in crisis in the here and now, but families are losing income. Financial security has been jeopardized for years to come.”

Many Mothers plans to hire a navigator to help connect high-needs families with resources.

Villamil has posted a job for a part-time bilingual coordinator on the nonprofit’s website and hopes to hire someone by June 8.

Looking to the future, Castillos and Villamil said it’s likely Many Mothers will continue to adapt to clients’ changing needs.

But the heart of the mission will stay the same.

“There’s just been a shift from in-person to material support,” Castillos said.

“It might not be hands-on support by a volunteer, but it’s still that practical and physical support that families need,” she said. “It’s more literal than I would have thought, but this is where the need is right now.”

Some of the programs at Many Mothers have been put on hold and others have expanded during the COVID-19 pandemic. Call 505-983-5984 for more information. The nonprofit’s continuing efforts include:

• Baby boxes: Cardboard sleep boxes that aim to prevent infant death, with a mattress, sheet and other baby supplies.

• Village closet: A closet filled with new and gently used donated items — such as breastfeeding supplies, baby carriers, toys, books and clothing — for babies and children up to age 3.

• Educational and emotional support, in which volunteers call new mothers on the phone or visit with them via online video platforms.