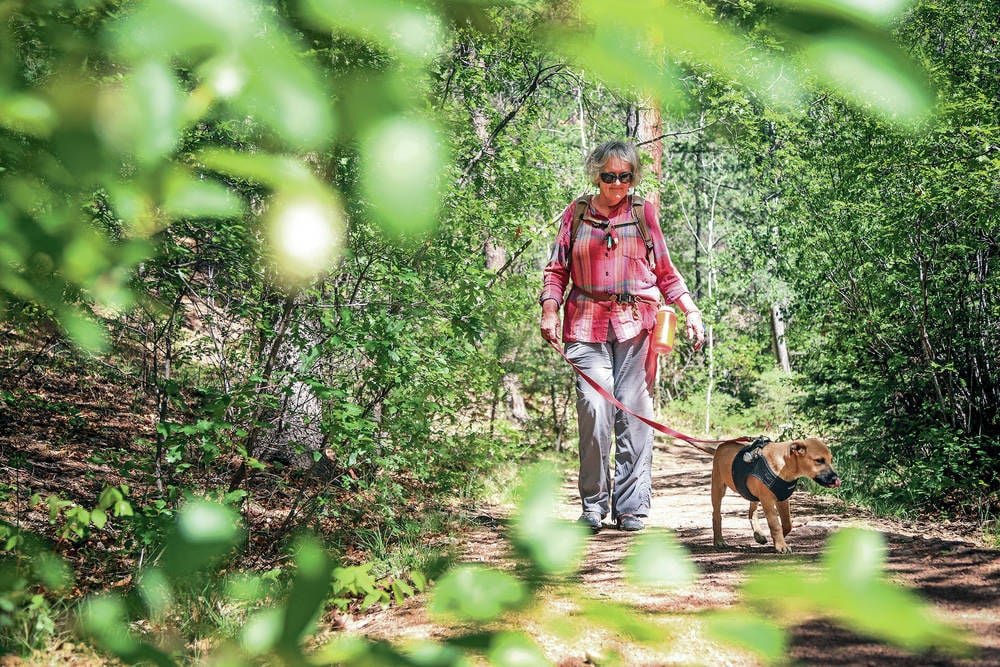 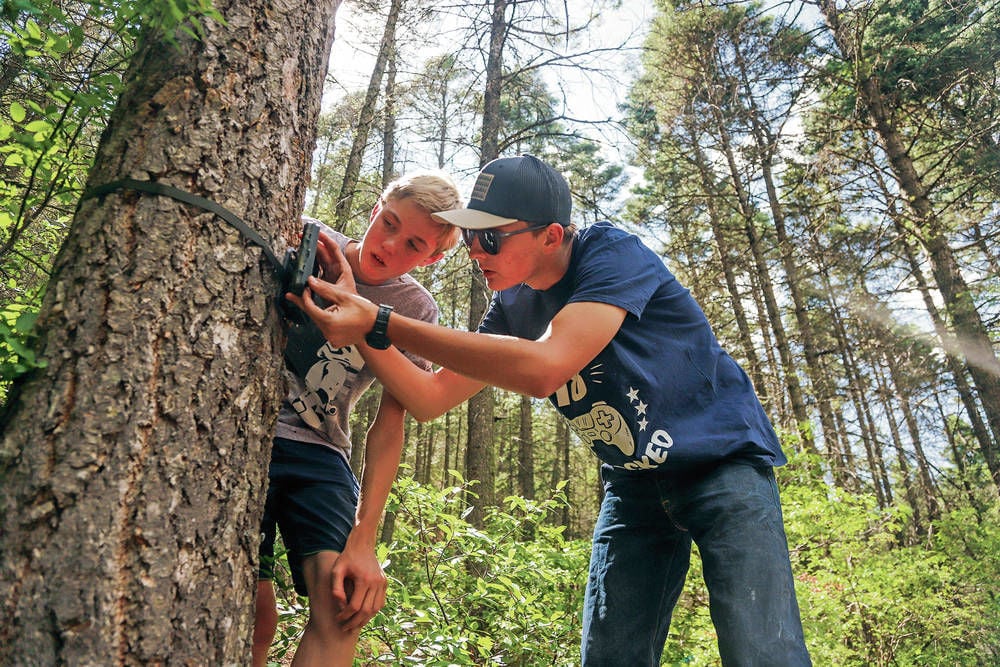 Luis Teich, 15, and Seth McClure, 18, set up a camera Wednesday to capture footage of wildlife near their campsite at the Black Canyon Campground in the Santa Fe National Forest. The teens, who were visiting from Las Cruces and had plans to stay in the national forest through Sunday, were told they would need to leave by Friday morning because officials planned to close the forest. Gabriela Campos/The New Mexican 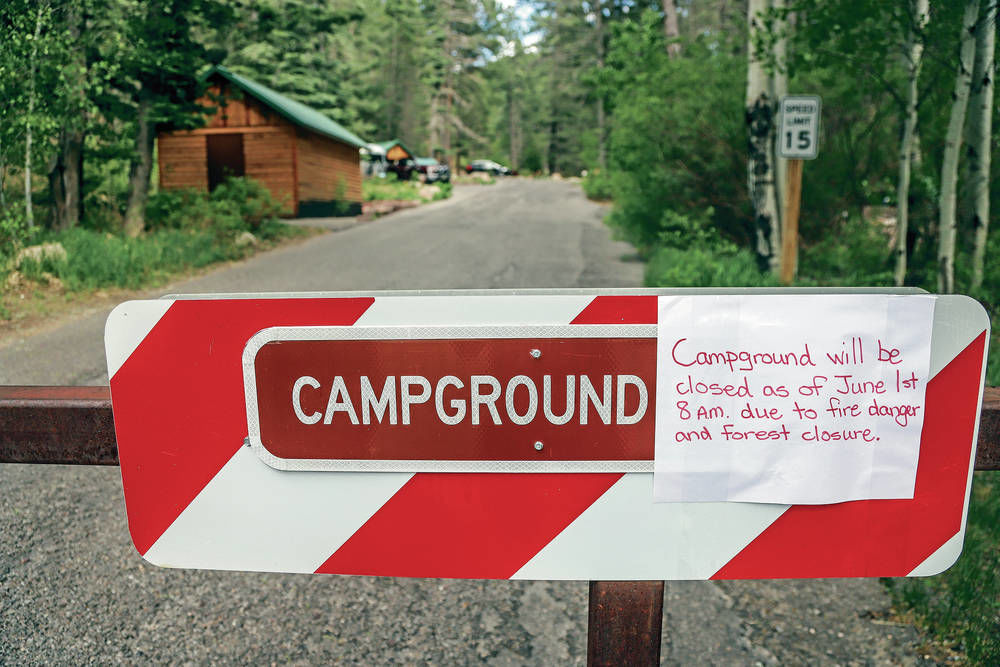 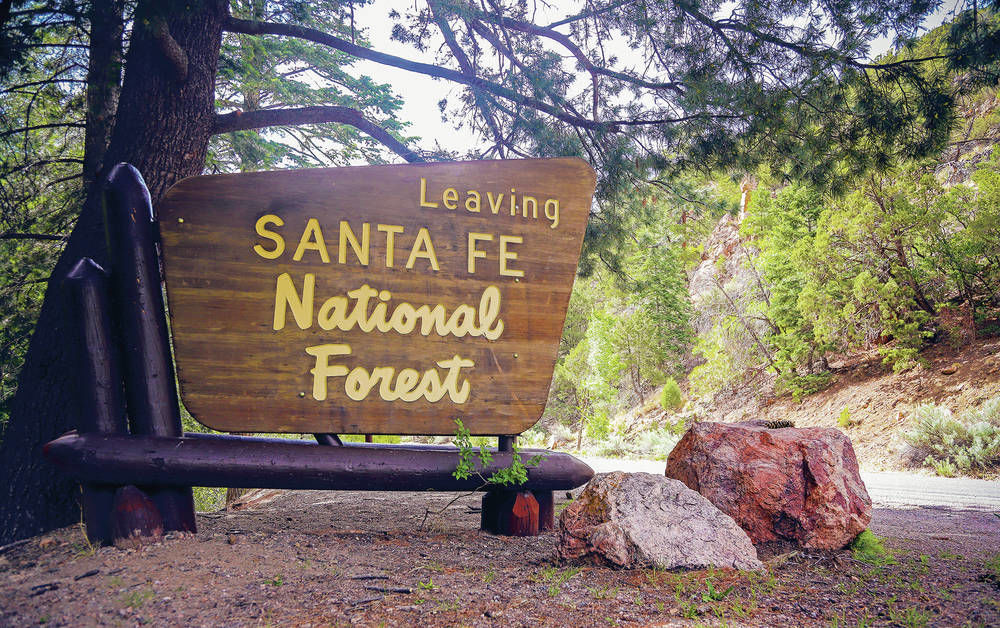 A Santa Fe National Forest sign near the entrance of Hyde Park. The forest will close on Friday due to fire restrictions. Gabriela Campos/The New Mexican

Luis Teich, 15, and Seth McClure, 18, set up a camera Wednesday to capture footage of wildlife near their campsite at the Black Canyon Campground in the Santa Fe National Forest. The teens, who were visiting from Las Cruces and had plans to stay in the national forest through Sunday, were told they would need to leave by Friday morning because officials planned to close the forest. Gabriela Campos/The New Mexican

A Santa Fe National Forest sign near the entrance of Hyde Park. The forest will close on Friday due to fire restrictions. Gabriela Campos/The New Mexican

Santa Fe National Forest and its 1.6 million acres in the Sangre de Cristos, Jemez Mountains and surrounding areas will be closed indefinitely to public access starting at 8 a.m. Friday because of fire risks, officials announced Wednesday.

All recreational activities will be prohibited until the dry conditions improve.

The heightened fire restrictions call for the closure of all forest roads, trails and campgrounds, though there likely will be exemptions for private property owners and business owners, residents with special-use permits — such as ranchers with grazing permits — as well as government employees, firefighters and Native American tribes, according to a news release.

This marks the first time since 2013 that the forest has enacted these restrictions, spokesman Bruce Hill said.

“We feel the need to go into Stage 3 restrictions until we start getting moisture,” he said.

Claudia Ahlstron of Santa Fe, who was hiking Wednesday on the Black Canyon Trail off Hyde Park Road, was saddened to hear that the forest would close but said she understood the need for the restrictions.

“The woods are my church, my way of reconnecting,” said Ahlstron, who hikes on forest trails about five times a week, “so of course I’m going to miss it terribly.”

Forest spokeswoman Anna Bouchonville said some details of the closure order have not been finalized, such as whether shoed horses will be prohibited from forest lands, due to the risk of their shoes sparking a fire.

A news conference is scheduled at 10 a.m. Thursday at the National Forest Supervisors Office on Forest Lane in Santa Fe, where Supervisor James Melonas and other officials will discuss the shutdown in more detail.

Three national parks surrounded by the forest also announced Wednesday that they will close down all backcountry and wilderness areas Friday, just after midnight.

Visitors to Bandelier National Monument will still be able to tour the visitor center and some parts of the ruins in Frijoles Canyon, a news release said, and two campgrounds at the monument will remain open. The Valles Caldera National Preserve will offer ranger-led hikes and tours, and the Valle Grande entrance station and bookstore will be open to guests. But fishing, hiking, biking and horseback riding will be prohibited.

The Pecos National Historical Park will close the Civil War Battle of Glorieta Pass Hiking Trail, and several planned events have been canceled. The visitor center and Ancestral Sites Trail will be open to the public, and rangers will continue to lead tours of some other areas of the park.

The Santa Fe National Forest’s news release said parts of the Rio Chama Wild and Scenic River corridor — a 120-mile stretch of the river from Colorado to where the Chama meets the Rio Grande in Española — are jointly managed by the U.S. Forest Service and the Bureau of Land Management and will remain open. County and state roads that cross Forest Service lands also will be open to traffic.

Violations of a forest closure order carry a mandatory appearance in federal court and are punishable by a fine of up to $5,000 and six months in prison, the news release said.

Information about the shutdown will be updated on forest’s website at www.fs.usda.gov/alerts/santafe/alerts-notices.

Closures typically depend on factors such as forest conditions, how well the public is complying with the forest’s fire restrictions and whether fires are raging in other areas, Forest Service employees told The New Mexican earlier this month.

While Hill said the decision to shut down Santa Fe National Forest is largely based on dry conditions — the forest areas are in extreme and severe drought, according to the U.S. Drought Monitor — Melonas also cited “widespread noncompliance with Stage 2 restrictions.”

Nonetheless, forest and fire officials have found “more than 120 abandoned campfires across the forest, including at least 84 over the Memorial Day weekend,” the news release said.

“Under current conditions,” Melonas said in the statement, “one abandoned campfire could cause a catastrophic wildfire, and we are not willing to take that chance with the natural and cultural resources under our protection and care.”

Hill said monsoon storms, projected to start in early July, are the forest’s “biggest hope” of ending the closure, and it’s possible restrictions will be lifted in parts of the forest at different times.

“Basically, we’ll just have to see what we get and when,” he said. “Sooner would be better. We’ll take it whenever we can get it.”

Senior hydrologist Royce Fontenot of the National Weather Service in Albuquerque told The New Mexican last week that “the current outlook hints for at least a normal monsoon season. We will have a better idea in early June.”

Fontenot added: “The environment has been malnourished for a long time.”

The Drought Monitor shows just a sliver of Southern New Mexico in “abnormally dry” conditions, while the rest of the state is in various stages of drought, with conditions becoming progressively worse in the north.

Santa Fe National Forest last was closed for almost three weeks in the summer of 2013, with the exception of the Rio Chama corridor. Some parts of the forest, including parts of the Jemez Mountains damaged by the Thompson Ridge Fire, remained closed for months.

Cynthia Miller of the Santa Fe New Mexican contributed to this report.

What: Pecos Fishing Expo, a free, family-friendly event sponsored by the Santa Fe National Forest; prizes for kids under 18; no fishing license is required

Where: Monastery Lake, near the Pecos Benedictine Monastery; the area is exempt from the Santa Fe National Forest closure because it is managed by the New Mexico Department of Game Fish