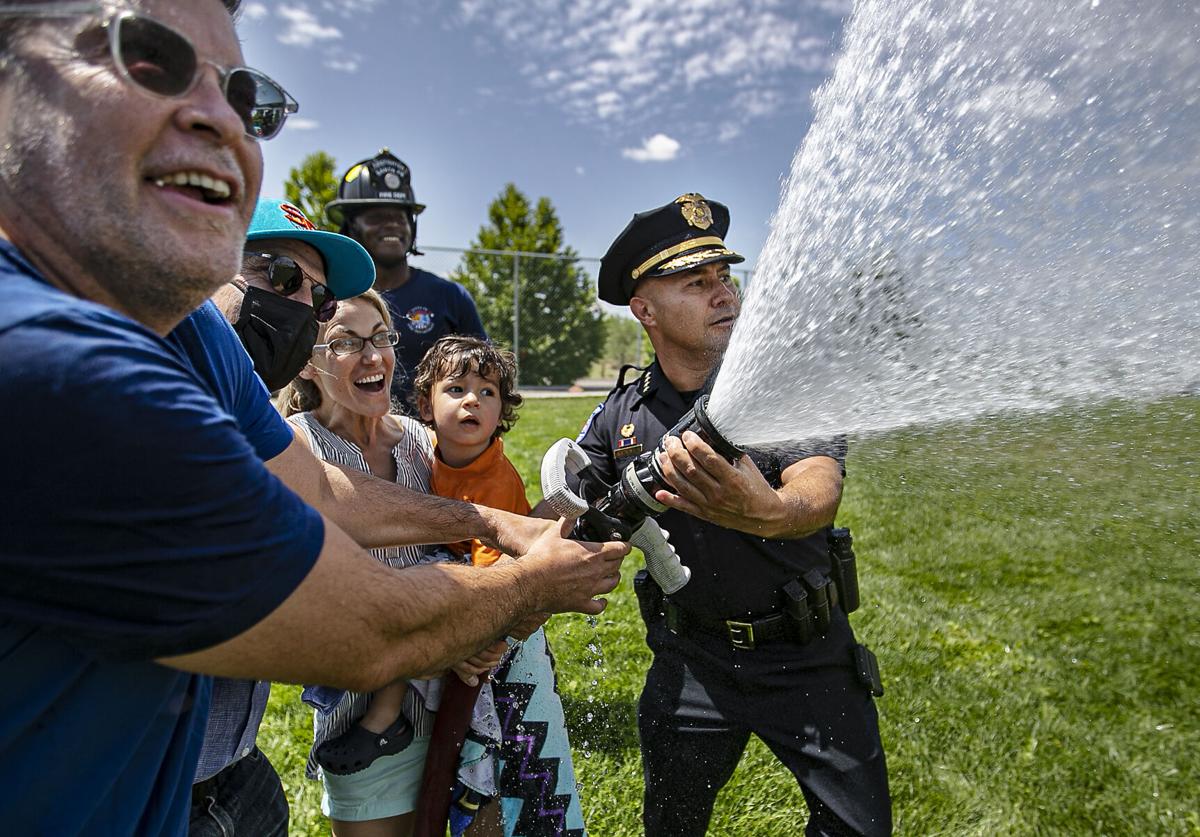 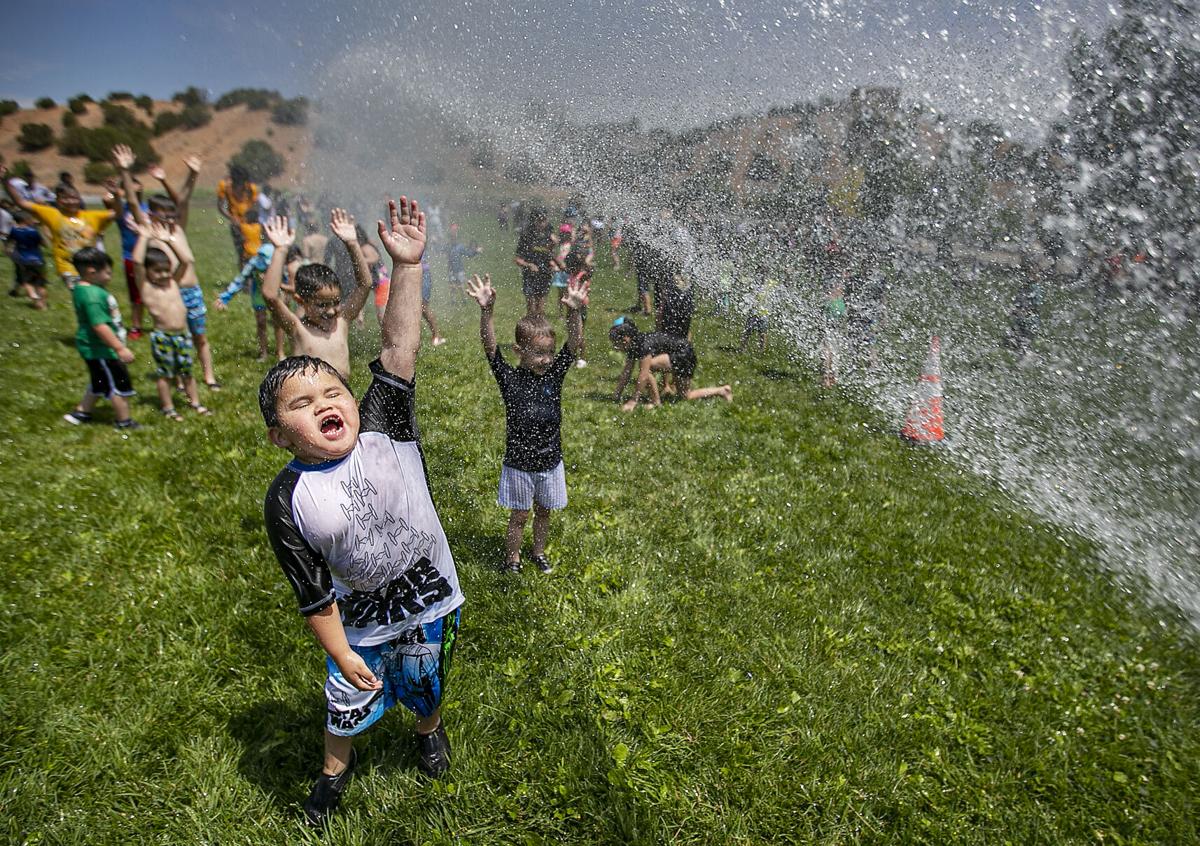 Antonio Chavez, 3, gets a face full of water during a cooldown event put on by the city of Santa Fe, the Santa Fe Fire Department and the Parks Division on Saturday at SWAN Park. Families gathered as firefighters unleashed a hose for about 20 minutes.

Antonio Chavez, 3, gets a face full of water during a cooldown event put on by the city of Santa Fe, the Santa Fe Fire Department and the Parks Division on Saturday at SWAN Park. Families gathered as firefighters unleashed a hose for about 20 minutes.

Firefighter Jeremy Ward stole the show Saturday, drowning out the political overtones of a taxpayer-funded event.

Ward has the build of an NFL linebacker and a genial disposition. Those attributes made him a good ambassador for city government, especially after he turned on a powerful fire hose and soaked his audience.

He maneuvered the hose for almost 25 minutes in the midday sun at SWAN Park, showering more than 160 kids and adventurous parents.

“Thanks. The kids loved it,” said the father of two little girls.

Not a discouraging word was heard as kids received replica firefighter hats, in pink or black, and got a close look at Ocho, the title emblazoned on a red fire engine of Company No. 8.

Oh, and Mayor Alan Webber arrived as he promised — in a campaign announcement that grated on a segment of Santa Fe residents, including his challengers, in the fall election.

City government had already promoted the SWAN Park “Cool Down” in a nonpolitical statement. Webber, though, made a pitch of his own.

He listed himself as a featured participant in the department’s event in an email distributed by his political staff under his campaign logo.

Webber arrived at 11:24 a.m., a few minutes before the scheduled starting time. Dressed in jeans, a casual shirt and a teal Santa Fe baseball cap, he followed firefighters onto a grass field.

Ward took charge at that point. He launched streams of water toward a mass of laughing children.

Webber latched onto the fire hose for a moment at 11:43 a.m. The mayor shook hands with a couple of firefighters, then moved toward a fence and slapped low-fives with kids standing there.

Had Webber not tied a city-funded event to his reelection campaign, the 35 minutes he spent in the park wouldn’t have riled anyone or gotten him so much as a column inch of negative press.

Instead, Webber drew criticism while giving a platform to the women who want his job.

City Councilor JoAnne Vigil Coppler, the other mayoral candidate, had considered attending the watery gathering in SWAN Park. She decided not to after thinking it through.

“It clearly was used by him as a campaign event,” Vigil Coppler said of Webber. “I felt like it would be disingenuous for me to attend because I would be perceived as campaigning. This event is for families.”

Webber did not respond to questions I sent him after his email blast labeling the gathering in SWAN Park as an event in his reelection campaign.

Trying to walk back Webber’s email message, his political staff said the event in SWAN Park and a similar one next week in Franklin Miles Park are city-sponsored activities unaffiliated with the mayor’s campaign.

Webber was merely trying to get the word out to boost attendance, his campaign spokeswoman said.

A bright line stands between attending a city function and overtaking it as part of a reelection campaign. There was no legitimate reason for Webber to link his campaign to publicly funded events that were likely to please the audience.

If spreading the word was Webber’s only goal, his path was an easy one. He can control the city’s publicity office. All he has to do is order more announcements about the fire department’s community outreach program, and they will fill email inboxes.

Of course, the city communication office would be under scrutiny to make sure these announcements weren’t favoring one candidate over another. In truth, publicity about events run by the fire department shouldn’t mention any politician.

By early afternoon, the fire department’s event in SWAN Park had created a nice COVID-era memory for a lot of people.

Kids got wet, and firefighter Ward made quite a splash. A native of Louisiana, he’s been with the Santa Fe Fire Department for four years.

“I love the job,” he said as he moved to secure the now-dormant fire hose, so kids wouldn’t trip over it.

He had worked up a sweat while enjoying the crowd.

Behind the ugly backdrop of city politicking, it was the fire department’s day after all.

Really? Wasting gallons and gallons of clean water to promote his campaign?? (and yes, we can all see through the "fun day for the kids and families). The public is told there is a drought, but of course that doesn't apply to certain people - obviously. Remember when the drought didn't apply to the thousands of gallons of water Webber uses to water his mansion landscape? D. Stark - you ask how can Webber appear so at ease and confident with his history of horrible "leadership"? - hey when a person has no conscience or sense of morals it's easy!

Free publicity but in a negative way! He will still win re-election! And Vigil-Coppler will remain a city councilor. Oh well, that’s show-biz this past weekend, at one of our city parks!

Paul - VC’s term is up and you are completely wrong. By running for Mayor, if she loses, she is no longer on the Council. Do your research before you state incorrect information!

It’s very nice that the children had a good time and that a kind firefighter has been recognized, but really, why on earth are we using a precious resource in this manner and, in the middle of a serious drought? Summer is still young - we can only hope that we are not headed towards the same fate aa the West Coast.

I also wonder, how our Mayor can appear so at ease and confident given the history of his extremely disappointing and poor leadership. Please tell me exactly just what he has accomplished during his term besides fueling our division.

Vigil Coppler uses her position on city council at every meeting to campaign (criticize and pretends to care about residents when she leads the charge for more and more development without thought to neighborhoods) whether she clearly states so or not. I wonder how many years the great splash down has occurred.

Since you comment on almost every article regarding City Government why not step up to the plate and take action by running for office. You obviously think and believe you are the accountability overseer so do something by taking meaningful action. You have created quite a reputation and obviously thrive on conflict. Being judgmental and critical serves no purpose if you are not willing to put yourself on the front line. You complain about whiners and you win that award.

Seems a poor choice in the midst of a drought. Are they using gray water?

Seriously? Grey water? If we try we could start a conspiracy theory from this.

Grey Water? Yeah, nothing like having the kids playing in partial sewage... Of course, I wouldn't put that past Webber.

Hydrants are off the same water mains as the homes, I guess we have enough water to waste.

Theres a few less toilet that can flush when the water runs out.