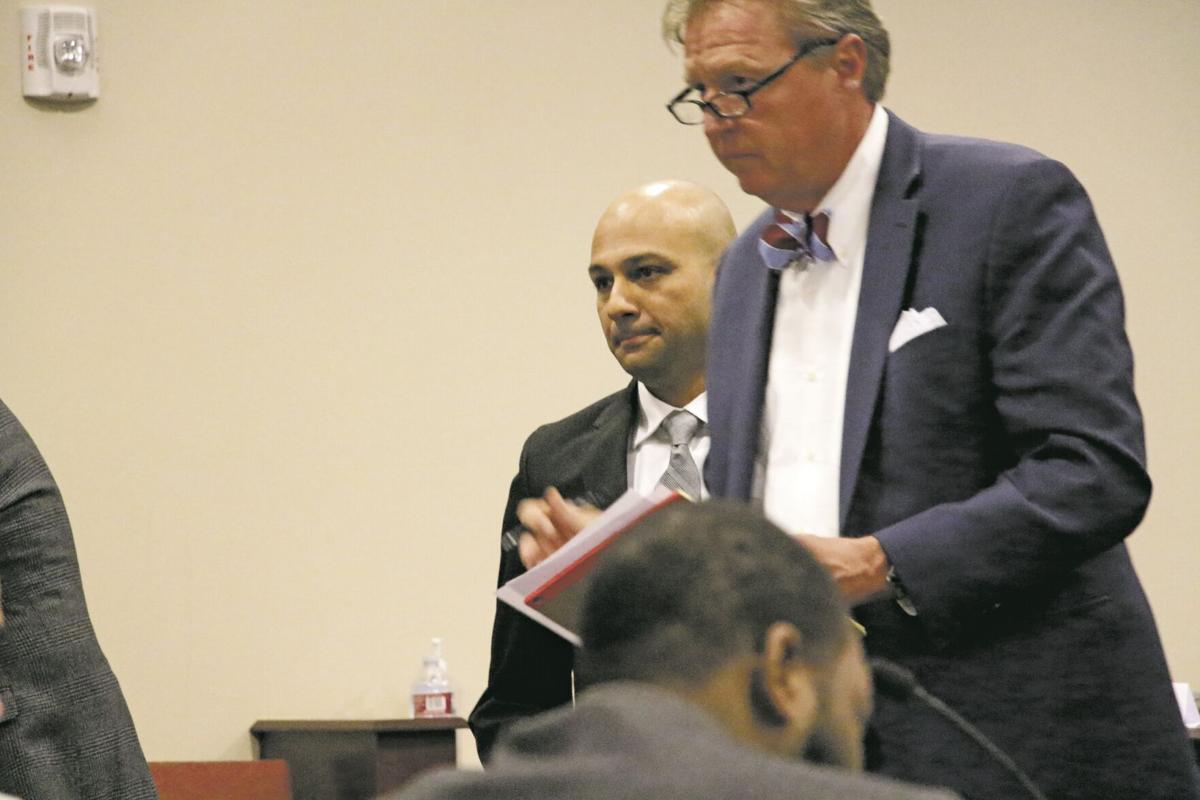 Mansoor Karimi, rear, appears with his lawyer, Tom Clark, at an arraignment hearing in state District Court in 2017. A judge has sentenced Karimi to eight years in prison for killing two men in a 2016 crash. 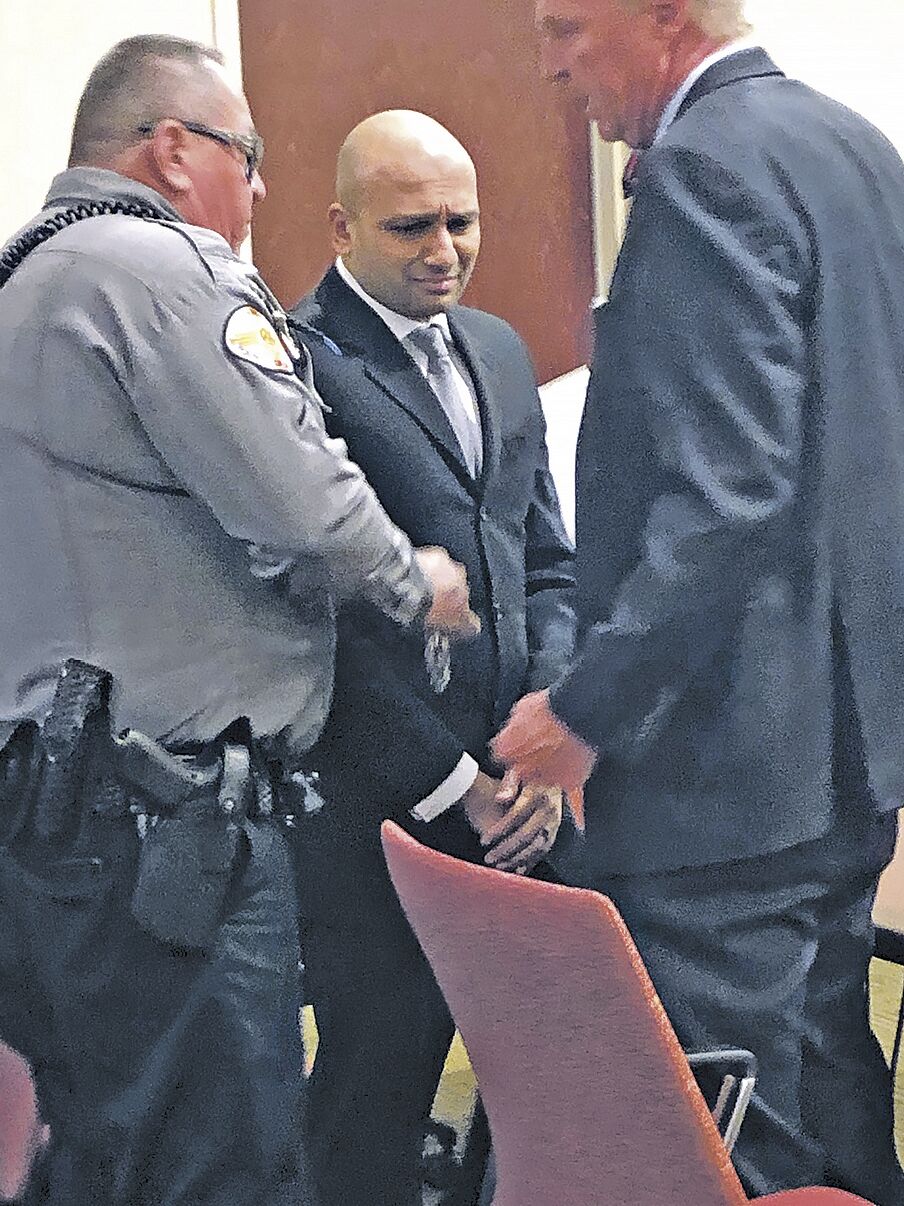 Mansoor Karimi, rear, appears with his lawyer, Tom Clark, at an arraignment hearing in state District Court in 2017. A judge has sentenced Karimi to eight years in prison for killing two men in a 2016 crash.

A judge sentenced a Santa Fe man to eight years in prison Friday for killing two people in a 2016 crash.

“You were driving way too fast, way over the speed limit, and you blew through a stop sign that you knew was there,” state District Judge Mary Marlowe Sommer told Mansoor Karimi before sentencing him to four years in prison for each man’s death. She called the crash an “avoidable accident.”

A jury convicted Karimi of two counts of vehicular homicide in February. At trial, prosecutors said he had been driving his black BMW 61 mph in a 25 mph zone when he ran through the four-way stop at Camino Carlos Rey and Plaza Verde on Dec. 16, 2016. He collided with a Chevrolet Cobalt, killing Ian Sweatt, 33, and Christopher Bryant, 30.

The jury deliberated for just two hours before finding Karimi guilty following a five-day trial. A New Mexico State Police crash reconstructionist said Bryant had stopped at the stop sign but Karimi had not.

Karimi, 43, wept throughout the emotional two-hour sentencing hearing. His relatives and those of the victims spoke about the devastation they’d felt in the wake of the crash.

The victims’ relatives said in addition to the anguish they’d experienced over the death of a loved one, the crash made them afraid of driving.

“Now whenever I am behind the wheel of a vehicle and I come to stop sign or light, I get scared and I start to shake because I’m afraid of getting hit by someone like [Mansoor Karimi] and dying,” Bryant’s aunt, Lisa Baker, said during the sentencing.

Deputy District Attorney Kent Wahlquist emphasized Karimi’s history of speeding tickets — a total of seven, two for driving more than 20 mph over the speed limit — as evidence that Karimi needed to be sent to prison to truly learn the lesson those citations hadn’t taught him.

“If he hadn’t been speeding, we wouldn’t be here, Wahlquist said.

But Karimi’s defense attorney, Tom Clark, said some of the tickets — which were his client’s only criminal record — were more than a decade old and weren’t a reason to send Karimi to prison.

“My client is a loving son, uncle, brother and stepfather and has never done anything in his life that would suggest otherwise,” Clark said. “He is a fallible human being who made a mistake, and that mistake shouldn’t send him to the penitentiary.”

Clark noted that Karimi — whose family fled Afghanistan after it was invaded by Russia in the late 1970s — contracted hepatitis B in a refugee camp in Pakistan as a 2-year-old and his illness could be made worse by the unsanitary conditions in prison, especially during the coronavirus pandemic.

“Sending [Mansoor Karimi] to the cesspool that is the Department of Corrections could very well be a death sentence, and that never in any instance would ever be justice,” Clark said.

The maximum sentence on the two convictions was 12 years. Marlowe Sommer sentenced Karimi to 12 years but suspended four years, ordering him to serve that on probation once released.

With the potential to earn day-for-day good-time credit toward his sentence, Karimi could be released in four years.

Karimi addressed the victims’ family members before being sentenced, saying he never meant to harm anyone and prayed regularly that God would heal their hearts.

“One of the most important lessons I’ve learned from this life-changing incident is that life is precious and a gift and it should never be taken for granted,” he said.

Well deserved, and a light sentence considering the crime and consequences.

“My client is a loving son, uncle, brother and stepfather and has never done anything in his life that would suggest otherwise,”

Uh-huh. Except kill two people because he believed the rules were all for other people. Eight years for two homicides is a pretty light sentence.

Hey, as they used to say in Law and Order, in the adversarial system of justice, everyone's entitled to a lawyer. But having been on a jury, if they took two hours to convict him it means they didn't buy any of the excuses. Heck, I was on a jury once and it took us a little less than an hour just to get through the red tape and elect a foreman before we started deliberating. Sounds like the jury in this case needed one round of voting to be unanimous.