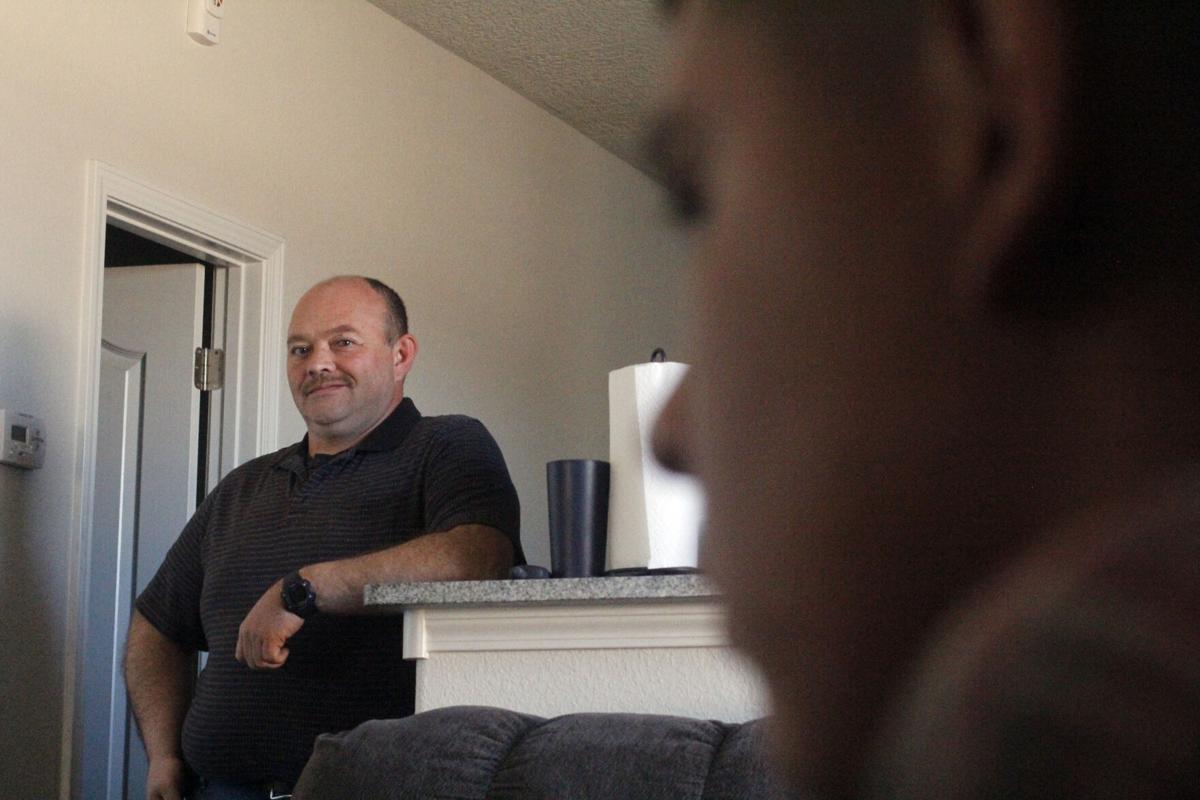 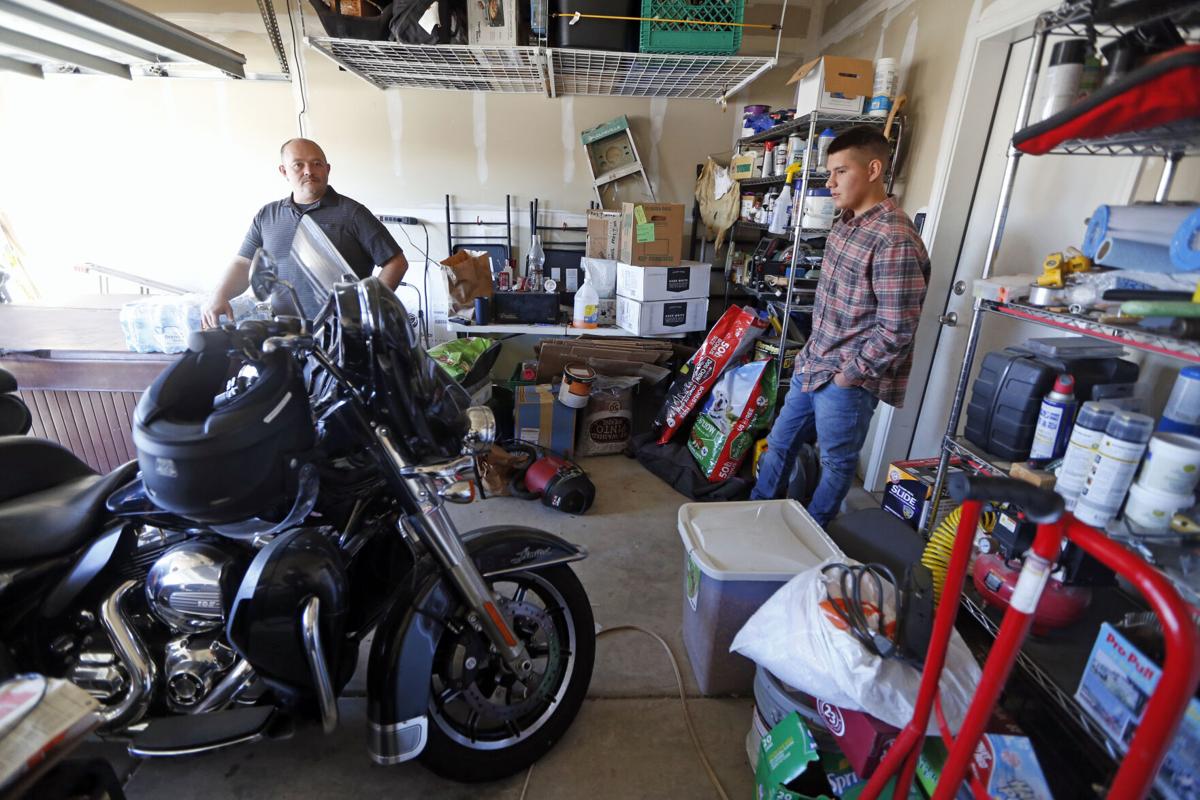 Paul Arellano of Santa Fe hangs out in the garage with his adopted son Gabe Arellano, 15, on Tuesday. Gabe was adopted by Arellano when he was a fourth grader. ‘A lot of kids are not as fortunate as me to get adopted young,’ Gabe said. 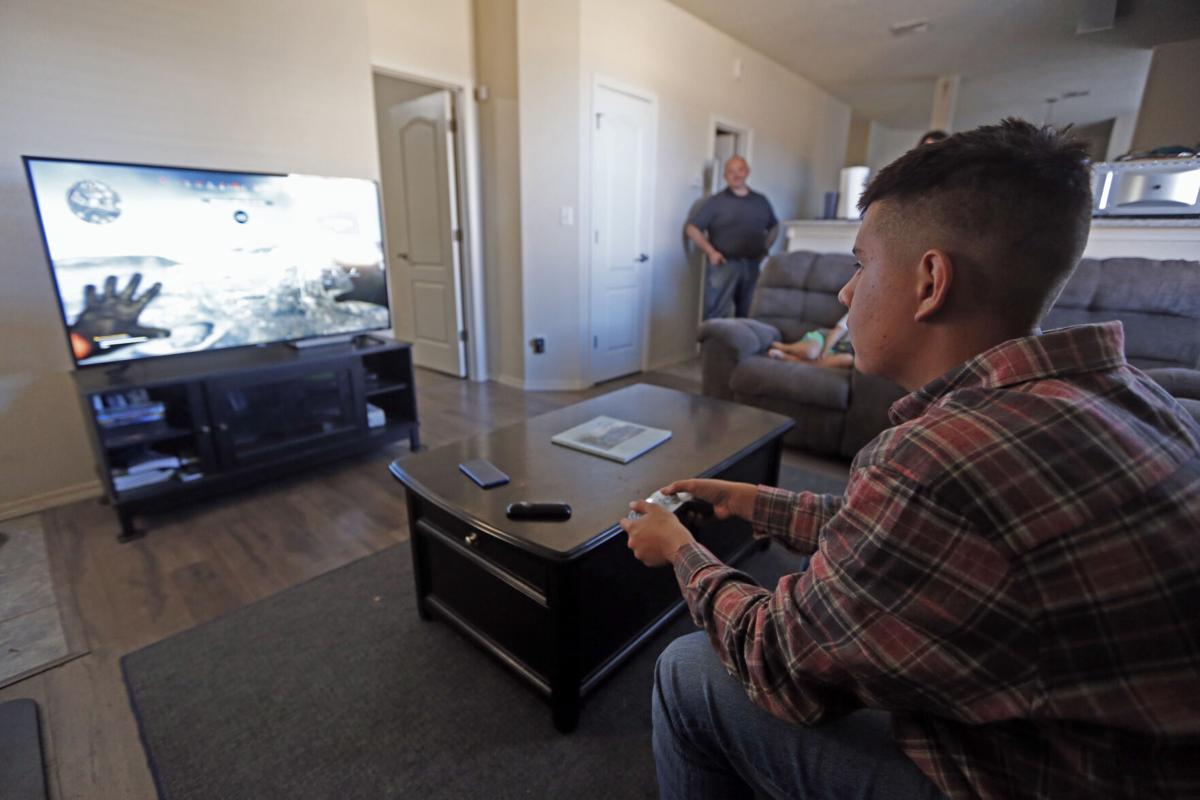 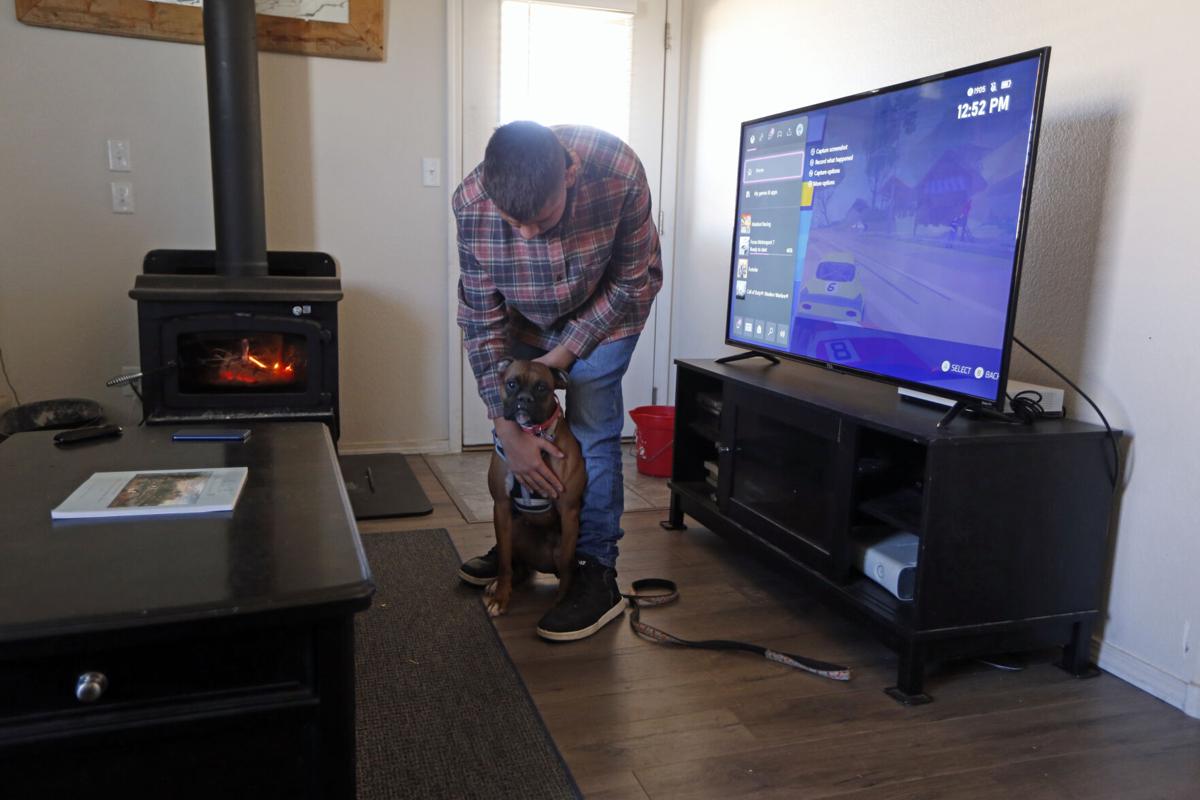 Gabriel Arellano, 15, pets his dog Nova at his home Tuesday.

Paul Arellano of Santa Fe hangs out in the garage with his adopted son Gabe Arellano, 15, on Tuesday. Gabe was adopted by Arellano when he was a fourth grader. ‘A lot of kids are not as fortunate as me to get adopted young,’ Gabe said.

Gabriel Arellano, 15, pets his dog Nova at his home Tuesday.

Like most of the foster kids who have come to Paul Arellano’s home in Santa Fe, Gabe arrived with a trash bag full of clothes and a lot of doubts.

That was years ago.

Now a high school freshman and Arellano’s adopted son, Gabe isn’t certain about his future — what to do after he graduates from Santa Fe Public Schools’ Early College Opportunities school. But he knows he won’t be leaving his father’s home the same way he came.

“I absolutely refuse to send any of my boys out of here with a trash bag,” Paul Arellano said.

“I’m down to four or five now, but usually I keep 15 to 20 duffel bags around,” he said. “If they leave and all their stuff is six duffel bags’ worth — well, they’re getting six bags.”

Over the past dozen years, the barrel-chested Arellano, who works as a locksmith at Santa Fe Community College, has been a foster father to around 70 boys in Española and Santa Fe. He can rattle off every name if you give him a minute to think. He’s taken them on trips to the outdoors, taught them to cut piñon for firewood and encouraged them to ask for help.

Gabe, 15, is the single father’s second foster child who became an adopted son; the first was Gabe’s older brother, 22-year-old Mathew. Both said Arellano has changed their lives.

Arellano also has two young foster sons at his home now. Due to state and federal confidentiality provisions for children in foster care, he could not disclose their names or ages.

The family planned to spend Christmas Day at Arellano’s mother’s home in Santa Fe, the father said, sharing a meal of posole, tamales and homemade tortillas.

The coronavirus pandemic has posed extra challenges this year for the more than 2,000 children in state custody, adoptive families and many other kids in kinship care, which means they are being raised by a relative. In-person visits with social workers have been halted, and foster children, like other kids statewide, have been doing most of their learning remotely.

Brian Blalock, Cabinet secretary of the state Children, Youth and Families Department, commended New Mexico’s foster families, as well as grandparents and other relatives caring for children, for the work they have done to meet those challenges.

“The pandemic has been stressful for children and parents, and our resource families have gone to great lengths to help strengthen familial connections,” Blalock said in a recent email. “... During these painful pandemic times, our families — and especially our relative caregivers — have stepped up.”

‘A lot of kids are not as fortunate as me’

Gabe, who was a fourth grader when Arellano adopted him, had lived in 10 different foster homes in Santa Fe, Taos and Las Vegas, N.M., and had used a handful of last names before he showed up at Arellano’s home. It took him a while to adjust to his new family — he shared a last name with his father for two years before fully embracing “Dad.”

He still isn’t much of a hugger.

But he feels blessed to be part of a family.

During the pandemic, Gabe has been teaching his young foster brothers to read while taking his remote classes in computer science at Early College Opportunities, which normally focuses on hands-on learning, such as fixing cars and building greenhouses.

“A lot of kids are not as fortunate as me to get adopted young,” Gabe said. “They get used to a cycle of moving around, and when they’re a teenager they’re out of control. Then most run away and steal or do drugs because that’s how they were raised, and they don’t really know anything else.”

His own experience was similar.

“The first thing I did when I moved in here was steal,” he said. “I stole some coins.

“He caught me,” Gabe said, referring to his father, “but he wasn’t all that mad.”

He reflected on his previous foster parents: “Most of them would say they don’t want me, they’re sorry, put my clothes in a trash bag and just drop me off. That was it.”

He has two older biological siblings: an 18-year-old sister, who aged out of the foster care system but still lives with a former foster parent in Belen, and a 16-year-old brother living in foster care out of state. He doesn’t have much contact with his brother, Gabe said, but he talks on the phone regularly with his sister. The two spent some time together Wednesday, and he gave her a Christmas present — Ariana Grande perfume.

“I moved around a lot. And by a lot, I mean a lot,” said Mathew Arellano, who lives in Santa Fe and works at the Domino’s Pizza on Zafarano Drive. “The difference in my dad is he didn’t give up like others did. ... He showed up time and time again.”

His car battery died at 3 a.m. one day last year, he said, and his dad drove out to jump it.

“Life was absolute hell before I met him,” Mathew Arellano said. “He’s been nothing but a blessing.”

‘We need people to step up’

Paul Arellano graduated in 1994 from what was then the Santa Fe Vocational Technical High School. He started working as a security officer for Pojoaque Pueblo, where he saw a lot of lost boys and young men acting out and getting in trouble, he said.

One February incident involving a 3-month-old baby locked in a car alone outside a casino in the middle of the night is tattooed to his memory.

The dozens of children in his care have ranged from 6-month-old babies to high school seniors. Some stay for a month. Others stay for years. None has really known much stability, he said.

He has had as many as seven kids at one time in his four-bedroom house with a wood-burning stove and sets of bunk beds. For fun, he takes them camping, fishing and on road trips to places like Arizona, Carlsbad and Mexico.

He acknowledged that being a foster parent — providing a real home to kids in need of one — is not always easy.

“I’ve been shot at. I’ve been knifed. I’ve been run over. Nothing is as hard as this,” he said. “But there are thousands upon thousands of kids without [a home] in this country, so the reality is we need people to step up and give these kids a home.”

He has considered ending his time as a foster father after Gabe graduates from high school, Arellano said. But he doubts he would be able to say no when the state called, seeking care for another boy who needed a home.

Arellano sometimes works with other foster parents in training. He said he always mentions “Standing Outside the Fire,” a Garth Brooks song about how risks are worth the consequences and love is worth the burn.

“Everybody’s life is like a puzzle, and every experience is a puzzle piece,” Arellano said. “It’s my job as the parent to take my puzzle and take their puzzle and sit together and figure out how to fit some pieces together.”

There are 2,199 New Mexico in foster care, according to the latest data from the Children, Youth and Families Department.

Foster children in the state are living in about 1,125 foster homes.

The National Foster Youth Institute has found only about half of American youth raised in foster care graduate from high school and less than 3 percent graduate from a four-year college.

Adults who want to help children in foster care without becoming foster parents themselves can become a CASA, a Court Appointed Special Advocate. I've done this on behalf of 5 foster children so far. It's rewarding volunteer work.

Thank you for that information.

May God bless you and keep you, brother.

You are my hero. Thank you for all you are doing for these children.