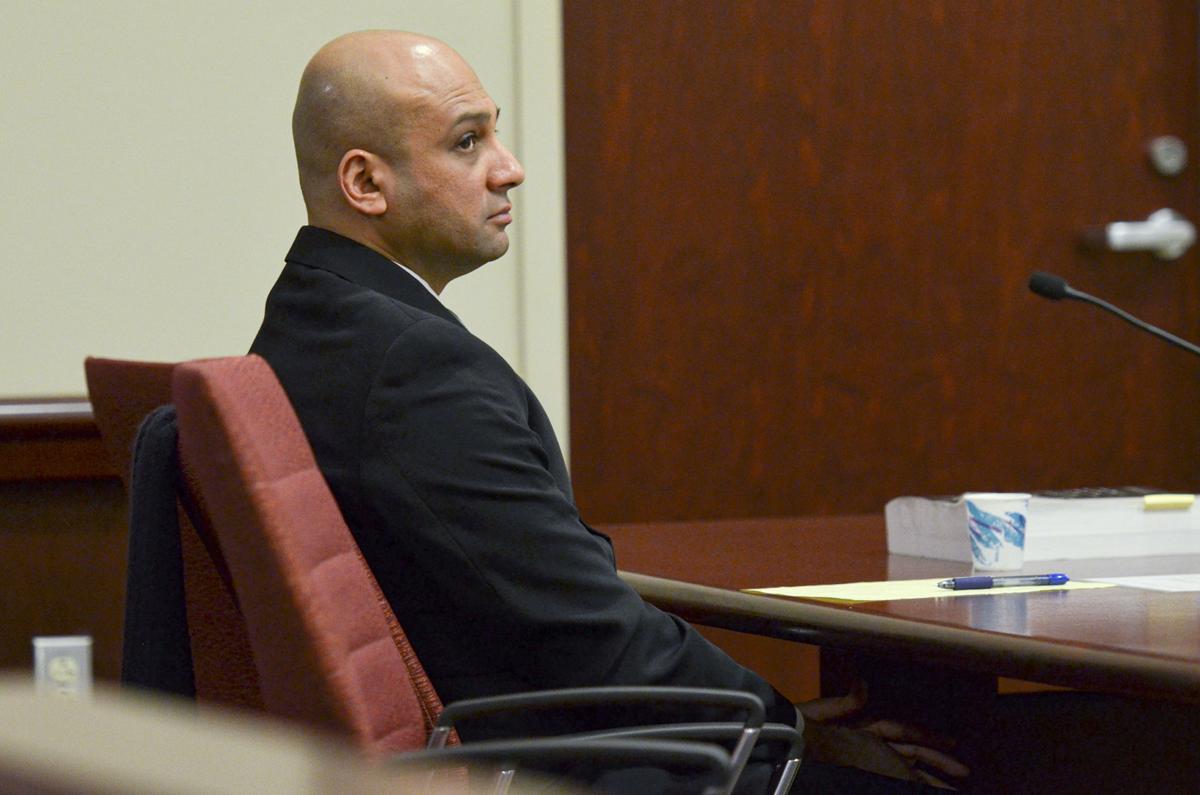 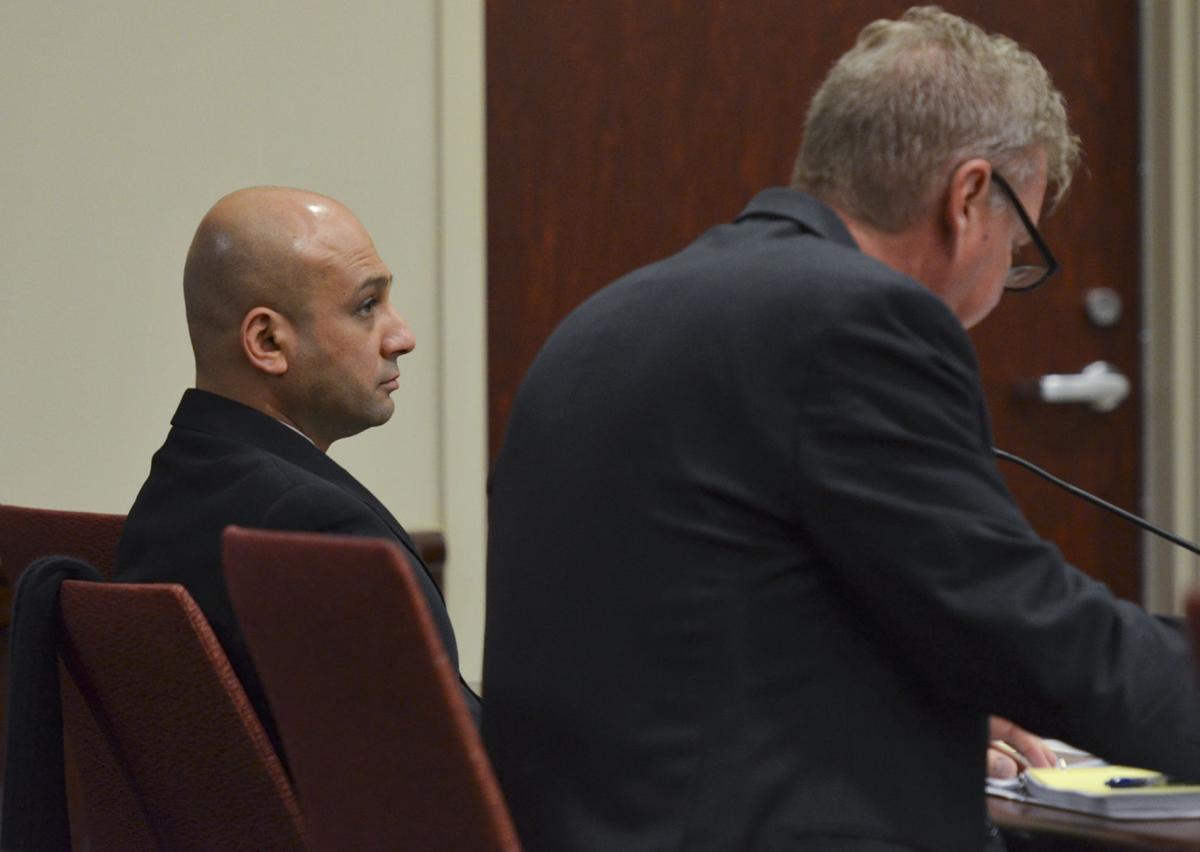 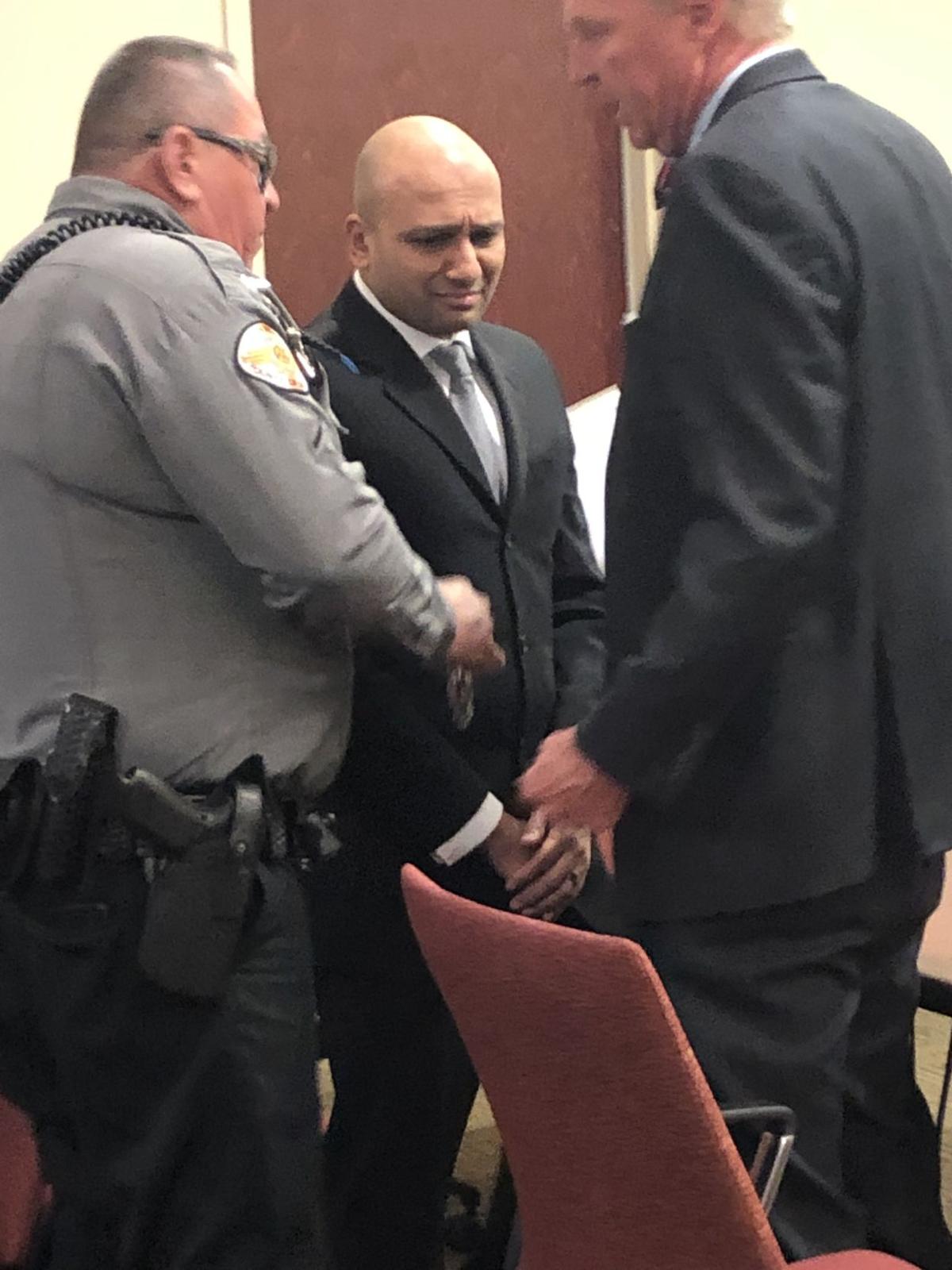 Mansoor Karimi, who was convicted of vehicular homicide Monday, reacts to the jury’s verdict. 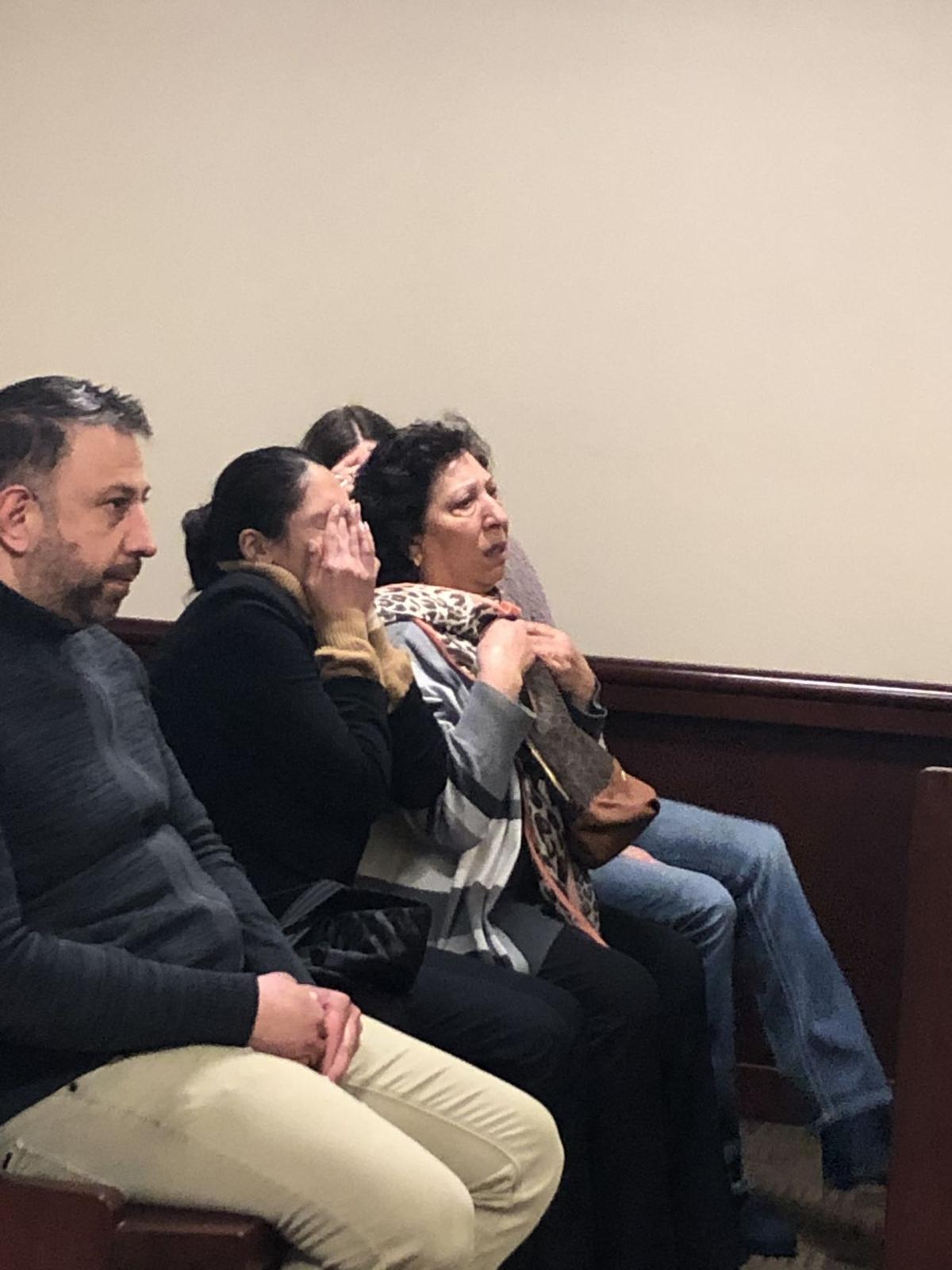 Family members of Mansoor Karimi, who was convicted of vehicular homicide Monday. Karimi faces up to 12 years in prison.

Mansoor Karimi, who was convicted of vehicular homicide Monday, reacts to the jury’s verdict.

Family members of Mansoor Karimi, who was convicted of vehicular homicide Monday. Karimi faces up to 12 years in prison.

A Santa Fe jury deliberated for less than two hours Monday before finding Mansoor Karimi guilty of vehicular homicide in the 2016 deaths of Ian Sweatt and Christopher Bryant after a fatal crash at the intersection of Camino Carlos Rey and Plaza Verde.

Karimi, 42, was charged with two counts of vehicular homicide due to reckless driving and a count of failure to render aid at the scene of the accident, in which police say he ran a stop sign at a high rate of speed Dec. 16, 2016, and collided with Bryant’s sedan.

Prosecutor Kent Walhquist said Karimi was driving his black BMW 61 mph in a 25 mph zone when he ran through the four-way stop and T-boned Bryant’s Chevrolet Colbalt, killing both men.

The trial lasted five days, during which jurors heard from an eye witness, who said Karimi had sped past him just before the crash, and New Mexico State Police crash reconstruction expert Stan Lundy, who said Bryant had stopped at the stop sign but Karimi had not.

Clark told jurors Bryant had alcohol and marijuana in his system when he died and might have been using his cellphone at the time of the crash, but his arguments were not enough to sway the jury of five women and seven men.

Karimi’s family cried out in anguish when the jury foreman read the verdict. And Karimi’s face contorted with emotion when state District Judge Mary Marlowe Sommer ordered him taken into custody, despite a request from Clark that he be allowed to remain free pending sentencing.

Karimi faces up to 12 years in prison.

The judge ordered a directed verdict Monday on the charge of failure to render aid, saying the state hadn’t presented enough evidence to prove that charge.

Clark said he intends to appeal the verdict following Karimi’s sentencing, which will take place after he undergoes a court-ordered 60-day diagnostic aimed at determining the most appropriate sentence for him.

Though he has a history of speeding citations, Karimi has no prior felony convictions.

“While disappointed in the verdict, I respect the jury process,” Clark said.

I would like to know how This person evaded justice this far and had a record so revolting without having something happen to his license and his liberty before this tragic event. Other states have points

On licenses that can have them suspended, does New Mexico?

Last time I checked, there were multiple loopholes in the speed laws that enable people to avoid racking up points. Plus, our lax judiciary speaks for itself. Perhaps if more people got their licenses suspended, they would respect traffic law a little more?

Nah. What was I thinking?

You have to keep in mind that this is New Mexico, where DWIers get the standard slap on the hand with a feather and sent on their merry way to do it over and over again, until they finally kill someone.

Thankfully larger all-way stop signs have already been installed at that intersection — a much better solution than the speed van that had been a constant presence just a few yards away.

All-way stop signs are a low-cost, low-maintenance way of addressing traffic issues, in contrast to speed vans (which the city has been considering bringing back) and/or elaborate “traffic-calming” installations — the vans are really only good for revenue generation.

The sentence should include not only substantive jail time, but also a revocation of driving privileges upon release.

But I doubt it

As a coo once told me as I almost hit sideswiped by someone changing lanes in the middle of a left turn from cerrillos road west to st Francis south ‘ it’s illegal, but this is Santa Fe’

Because I had time, I just looked up Christopher Bryant's (the other driver in this accident) record and boy oh boy do I

ever AGREE with you on this one. www.nmcourts.gov (under case lookup.) This is why people should not sit behind their computers with opinions and type away. This is a terrible tragedy all around. No need for all of you to spew. It's hateful and completely unnecessary. Many lives have been touched over this on both sides. I hope that both families find peace and can heal. It is important to forgive and to also be forgiven. Maybe someday any of you reading this will think about that, should ANY tragedy strike your family or close friends.

This is the only topic you have ever posted on. One can only conclude you have some relationship with the convicted defendant that warrants your attention.

Certainly we all have a right to our opinion but seems to me the deceased were simply in the wrong place at the right time to be killed.

I do not have social media and I used a google search to look up something in the paper and saw your posts on another subject, which I also completely disagree with you on. (In fact, one more log in and I have to pay for this paper.) I felt compelled to say, as I have been stating, that I wished for people to be kind. That does not make me one sided at all. In fact, I was taught as a young human to have empathy for all people. I was hoping to help you and some of the others see that being unkind changes nothing for this tragic accident. Empathy is learned when humans are young. Someone like parents have to teach you, or an experience has to teach you. If you have parents who teach you self righteousness, anger, unkindness, or parents teach their children nothing at all, then ugliness comes out. Learn to see both sides of things and learn to have empathy, forgiveness, and peace. You may find a lot more things to do during the day than bloviating about things that you know little to nothing about. It is that simple. Good night and again, I pray all families involved find peace.

The jury did their job. Now the judge has to do hers... We can only hope she will give him the full 12 years... But even 12 years is a joke.

Two hours Sounds like a slam dunk. Perhaps the jury pool is fed up with this garbage. Drive responsibly or suffer the consequences.