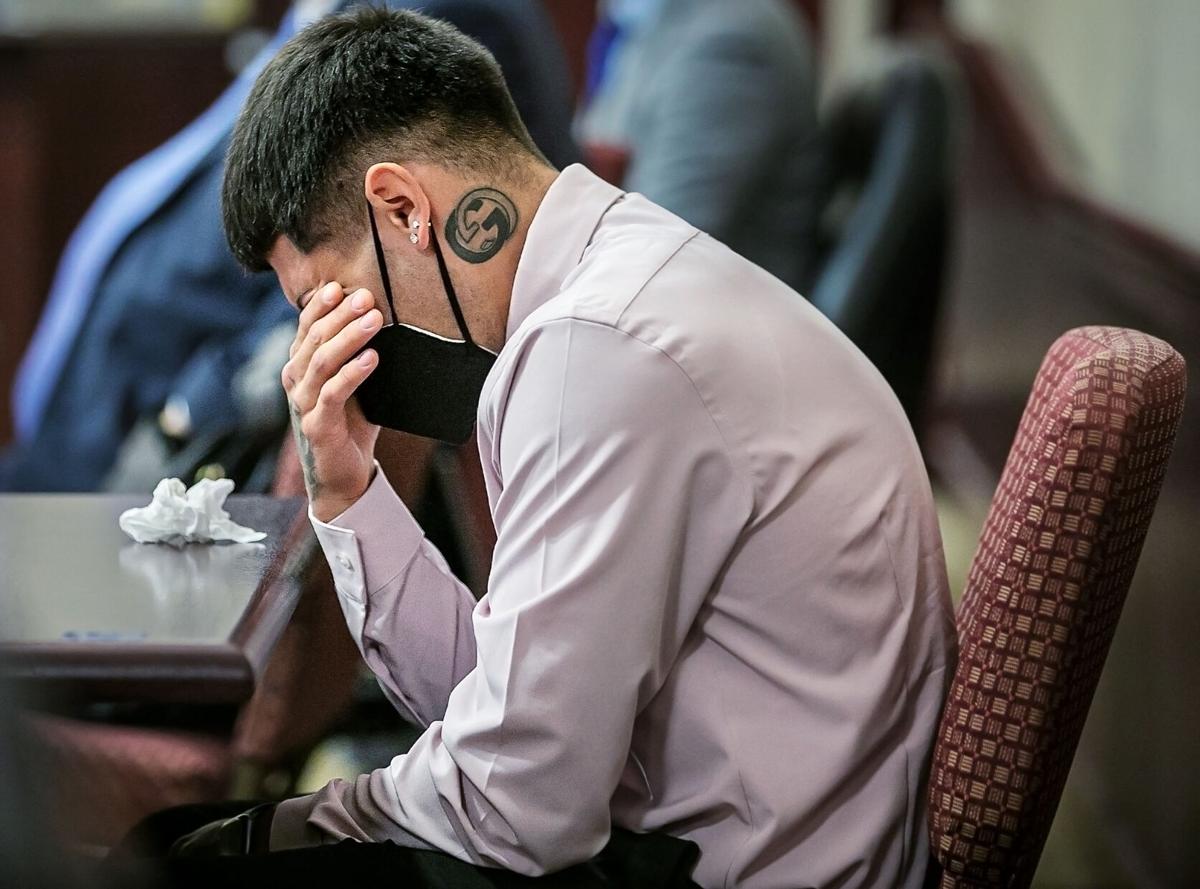 Zachary Gutierrez, 20, breaks down in tears Friday in Judge T. Glen Ellington's courtroom after he was found not guilty in the 2018 shooting death of Richard Milan. Gutierrez was charged with second-degree murder after his companions that night made statements to police implicating him in Milan’s death. But two of the three girls in the group recanted Thursday, saying it was another boy who shot Milan. 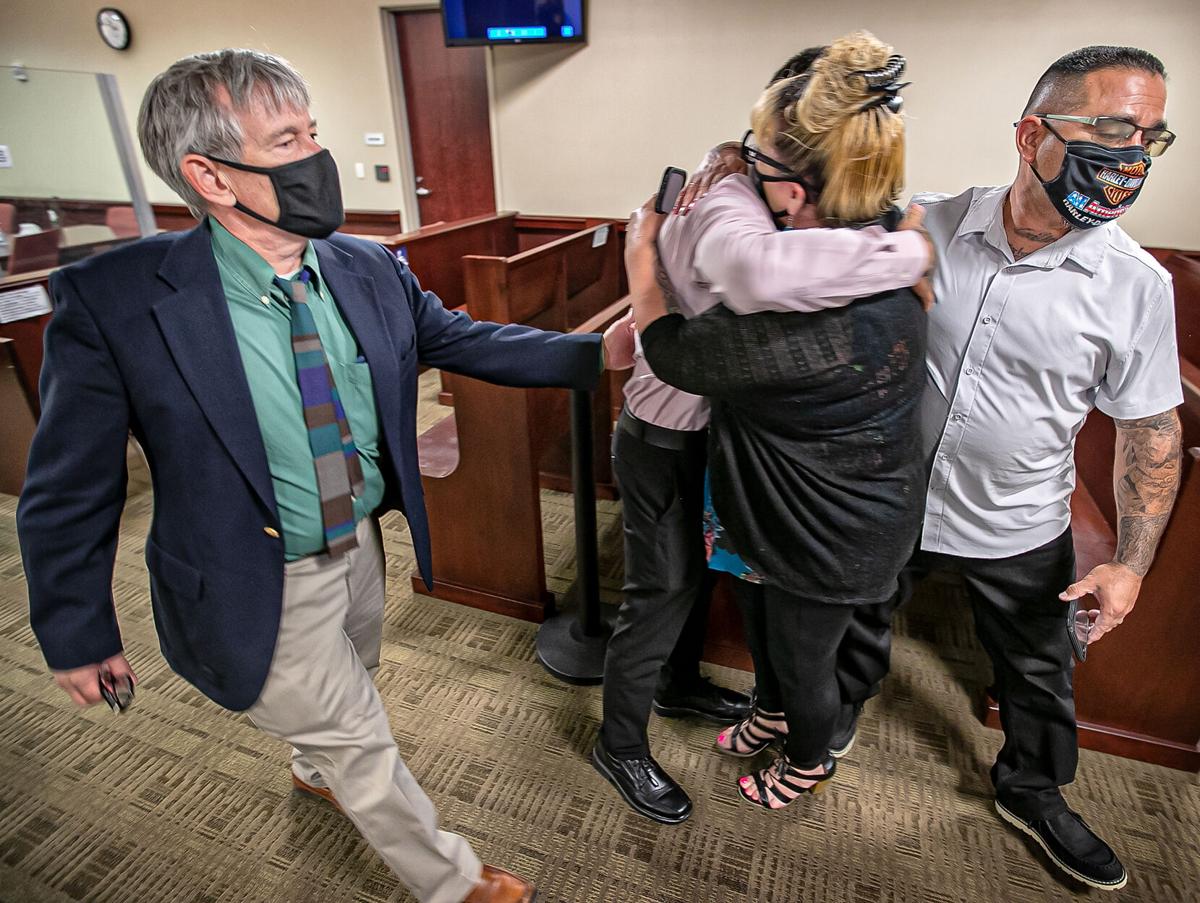 Zachary Gutierrez, 20, embraces his mother Cecilia Gutierrez and father Matthew Gutierrez on Friday as defense attorney Hugh Dangler ushers them out of the courtroom after Zachary Gutierrez was found not guilty in the 2018 shooting death of Richard Milan. 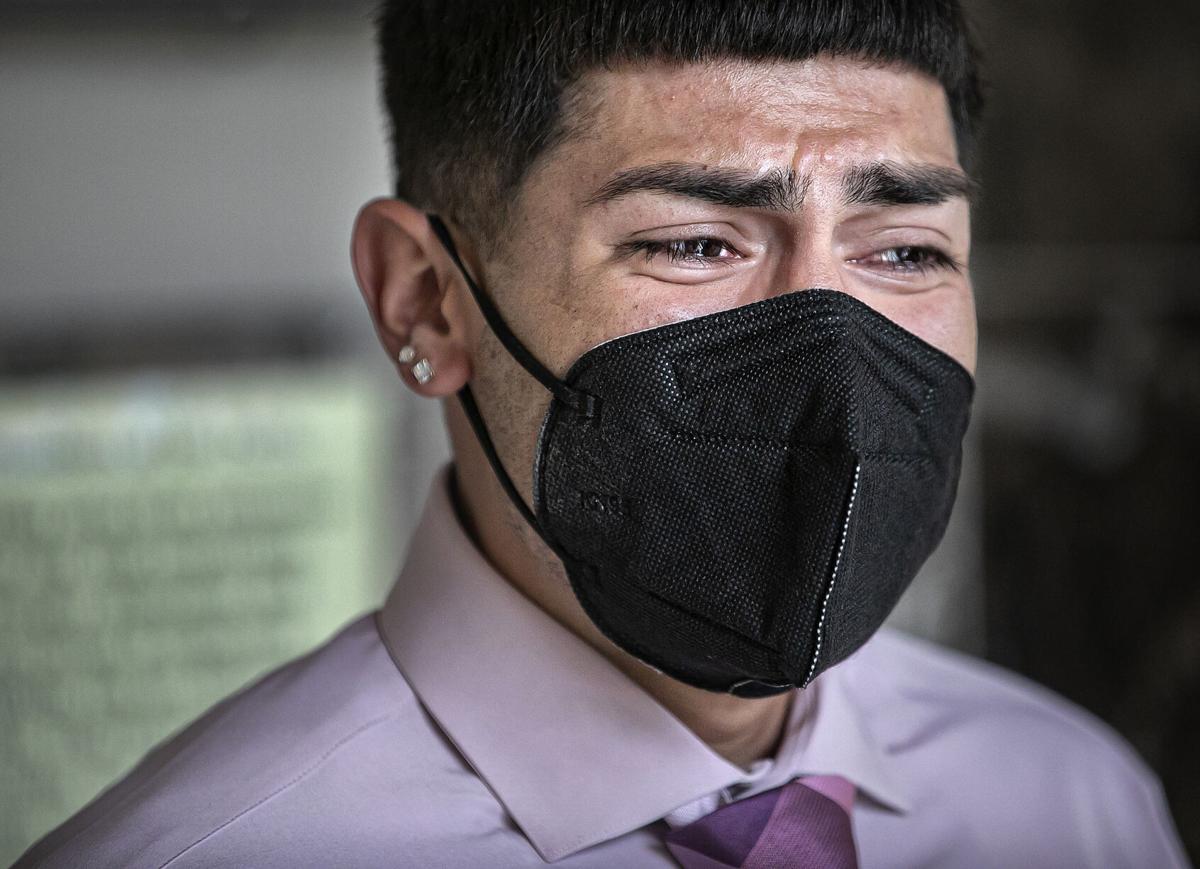 Zachary Gutierrez, 20, tears up Friday outside the courtroom after he was found not guilty verdict of second-degree murder. 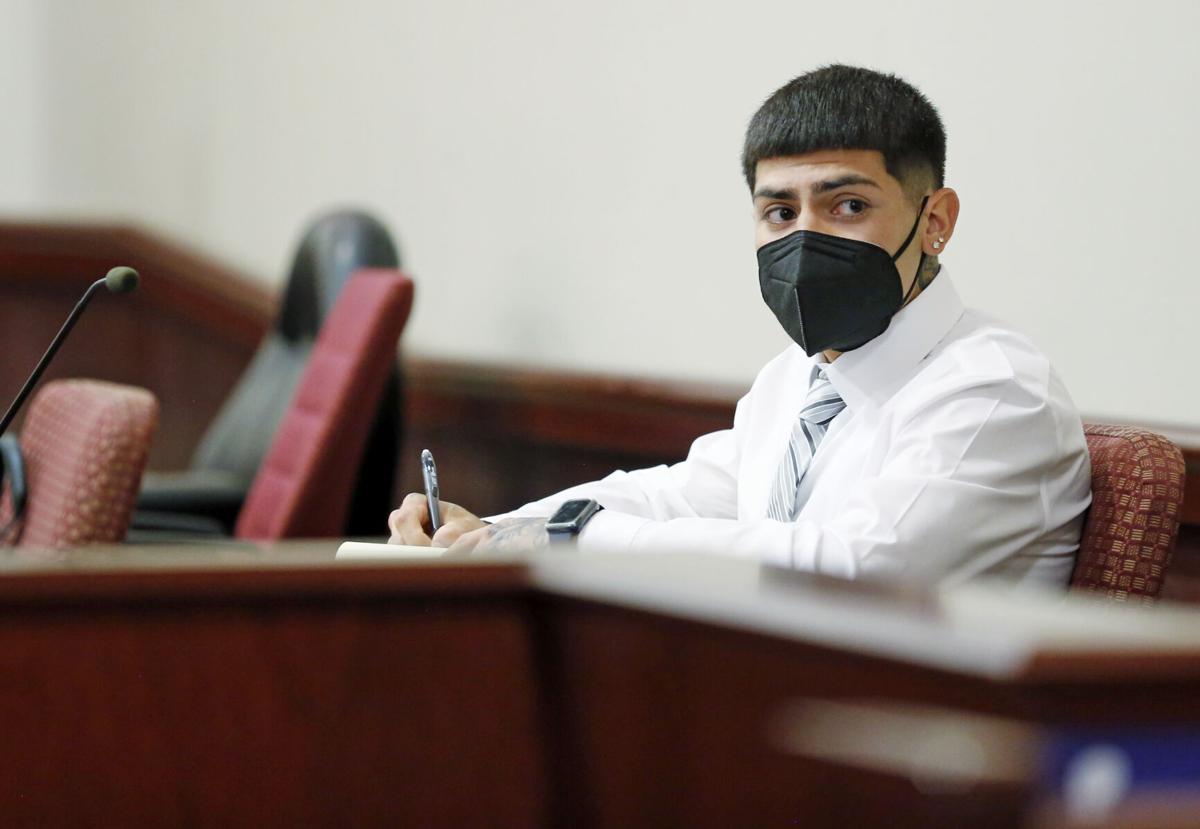 Zachary Gutierrez glances toward his parents Thursday as he sits in court.

Zachary Gutierrez, 20, breaks down in tears Friday in Judge T. Glen Ellington's courtroom after he was found not guilty in the 2018 shooting death of Richard Milan. Gutierrez was charged with second-degree murder after his companions that night made statements to police implicating him in Milan’s death. But two of the three girls in the group recanted Thursday, saying it was another boy who shot Milan.

Zachary Gutierrez, 20, embraces his mother Cecilia Gutierrez and father Matthew Gutierrez on Friday as defense attorney Hugh Dangler ushers them out of the courtroom after Zachary Gutierrez was found not guilty in the 2018 shooting death of Richard Milan.

Zachary Gutierrez, 20, tears up Friday outside the courtroom after he was found not guilty verdict of second-degree murder.

Zachary Gutierrez glances toward his parents Thursday as he sits in court.

Jurors deliberated for about four hours Friday, the fourth day of Gutierrez’s murder trial, before unanimously deciding the state had not proven beyond a reasonable doubt he was guilty of fatally shooting Milan.

Milan, who had been visiting the city with his wife, was out walking his dog on a trail near the intersection of Airport Road and Lucia Lane around 8 p.m. Sept. 26, 2018, when an encounter with Gutierrez, then 17, and four other teenagers turned deadly.

Gutierrez was charged with second-degree murder after his companions made statements to police implicating him in Milan’s death. But two of the three girls in the group testified Thursday it was another boy in the group, Jesus Arrieta-Perez, not Gutierrez, who shot Milan.

“I’m relieved,” Gutierrez’s attorney, Stephen Aarons, said in the hall outside the courtroom after the verdict was read. “It was what I expected, but you never know for sure. I think the biggest surprise isn’t the verdict but that the state went forward with this case with so much evidence against their position.”

District Attorney Mary Carmack-Altwies wrote in an email she was “disappointed” in the verdict. She added in a text message the case relied on witnesses’ statements as the basis for charging Gutierrez, and “those statements then totally changed.”

“While witness testimony initially put Mr. Gutierrez as the person that shot and killed Mr. Milan, they later changed their testimony,” the district attorney wrote in an email. We and law enforcement believed that [Arrieta-Perez] was credible and that was an issue for the jury to decide. We prosecuted the case that was presented.”

Arrieta-Perez initially told police he didn’t see who shot Milan because he was running away from the confrontation, but he changed his story after being arrested on a federal weapons charge.

He then said he had seen Gutierrez shoot the man.

Police never found the murder weapon — and never compared the three shell casings found at the scene to weapons found in Arrieta-Perez’s home, according to Aarons — making Arrieta-Perez’s testimony against Gutierrez the strongest evidence the state had.

Aarons attacked Arrieta-Perez’s credibility in his closing argument Friday, running down a list of things the lawyer said made the young man’s testimony unreliable.

One of the main things that set Arrieta-Perez apart from the other young people who testified, Aarons told the jury, was his lack of emotion on the stand.

“He was a pretty cool customer up there,” Aarons said, and didn’t break down like the three others who testified about what had happened that night.

“He is not working through grief or guilt or remorse,” Aarons said. “They were going through a process. [Arrieta-Perez] is not because he is stuck in a lie. He cannot tell people the truth. If he told people the truth, he would have these federal charges come down on him.”

Arrieta-Perez said on the stand his testimony against Gutierrez didn’t effect his federal case.

But Aarons cast doubt on that Friday, telling the jury he couldn’t remember the last time a Mexican national with drug and weapons charges was released from jail and not deported, as was the case with Arrieta-Perez.

“I’m sure he’s an asset to the government,” the defense attorney said. “I wish him well on that. But the way he got out, by falsely accusing someone else, we cannot accept his testimony beyond a reasonable doubt.”

The murder case was not the first or last time Gutierrez faced trouble.

He had an extensive history of encounters with law enforcement as a juvenile.

He was arrested in another case in February 2019 — about six months after Milan’s death and a few months before he turned 18 — in which he was accused of firing a handgun and fleeing police following an altercation at a local park.

Mary Carmack-Altwies said in a text message Friday that case — in which she said Gutierrez pleaded no contest to shooting at or from a motor vehicle and was sentenced as a juvenile to two years of probation — is one of the reasons her office believed he’d shot Milan.

“But we couldn’t bring that in at trial,” she wrote.

Gutierrez said after the verdict was read Friday he’s transformed his life since then.

“I’m totally different than when I started this three years ago,” he said. “I’m so into the Lord and energy and being at peace. … I love yoga. I love meditation, because it’s so centered. I never loved myself before. I was always chasing something I wasn’t, and I finally found my true self.”

Gutierrez — who has been on electronic monitoring awaiting trial — said he started his own home repair and maintenance business a year ago and plans to work toward general contractor and real estate licenses next.

Gutierrez’s mother and father, Cecelia and Matthew Gutierrez, said they knew their son hadn’t killed Milan. Despite being tested by the ordeal, they said, the family had come out stronger in the end.

“It’s been a long three years,” Cecelia Gutierrez said. “We are just so glad the truth has come out and we were set free from that. I’m just glad justice was served because there is a lot of times people don’t see that. I’m just glad the jury … saw a lot of the corrupt stuff that had happen and that my son is innocent.”

No one from Milan’s family attended the trial.

This is the second murder case handled by the First Judicial District Attorney’s Office this week in which a jury returned a verdict of not guilty.

Asked whether she felt two murderers had been set free, the district attorney wrote in an email: “I would never allow my office to prosecute a case that I didn’t think was viable. … I fully believe that both defendants committed those crimes but we simply didn’t have the evidence to prove it beyond a reasonable doubt.

“I’d much rather respond to a hard fought acquittal than dismiss a case that’s not perfect,” she wrote.

Going back for decades, our First District DA is one of the worst in the state for trial outcomes. You can look it up online. Since that is the case, they resort or plea bargains to get convictions. We really MUST reform this DA office at some point, and also the Judges.

So...the two murder cases mentioned in this article demonstrate that, in Santa Fe, if you are Hispanic and you murder an Anglo, a jury won't convict you...Classic case of Racist Jury Nullification...Sad and Scary.

Todd, race bait much? I have to say, your comment is one of the most asinine and blatantly racist remarks I have ever read… I have news for you, in Santa Fe, race does not play a significant part in jury nullification. It doesn’t matter if the victim or defendant is Black, White, Hispanic, Red, Green or Purple. ALL our criminals get off equally due to shoddy police work or the sheer incompetence of our District Attorney’s Office. And in the rare occasion when someone is convicted, our judges let them go with a slap on the wrist…That is why there is no justice here. Not because of race.

Andrew don’t waste your breath on a person like Todd, he isn’t worth it.

I wonder who threatened the witness who recanted...

If the witnesses are saying that Arrieta-Perez did it, will the DA be charging him? I suspect they changed their testimony because he may be going away anyway since the Feds are interested in him. Also, the testimony of an ex-girlfriend may not have been the most reliable. The intersecting investigation of Arrieta-Perez by the Feds isn't fully fleshed out in these articles, but it seems that it had an impact.

Gutierrez, whether he did it or not, has been given a second chance. I hope he continues to use it wisely.

They are not wanting to investigate further into him or anyone else involved the DA told me that they were pretty much done. The justice system is failing our family and grandfather.

Lol what a fu***** joke the NM judicial system is.

Seems that the judicial system, apart from the prosecutorial crew, worked just as it should. Jury found him not guilty. What should it have done?

"District Attorney Mary Carmack-Altwies wrote in an email she was “disappointed” in the verdict." Mission statement? Yes, sadly. This office needs much more funding so they can hire competent folks who will stay with the office.

I have a feeling this won't be the last we see of these young men.

I feel for every victim of violent crime in the City/County of Santa Fe going forward. The Investigations Division Commander needs to be held responsible. The case is only as good as the investigation going forward. If the state is going forward with the dismissal of immunity for Police Officers doing their jobs, Victims/Families of should be able to sue for incompetent investigations. I really feel for the victims family.

Thank you we appreciate all thoughts and support in this trial. I’m absolutely shocked at the way my grandpa was represented and how horribly the trial went.

Not remotely surprised... I predicted the outcome of this trial this morning.

The last sentence contains a typo: The word "doubt" is missing.