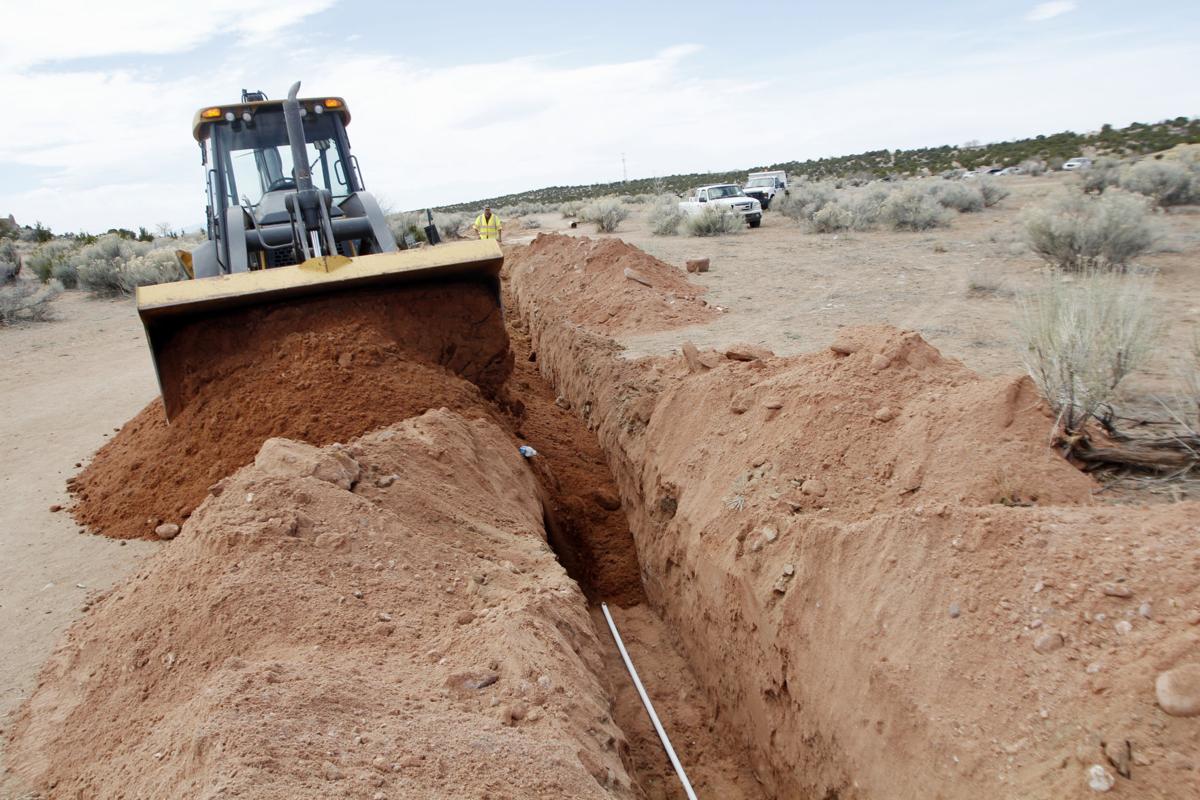 Pete Archuleta with the city of Santa Fe’s parks division, uses a front-end loader to bury a waterline Wednesday at Frank S. Ortiz Dog Park. The park will have three drinking fountains for pets. 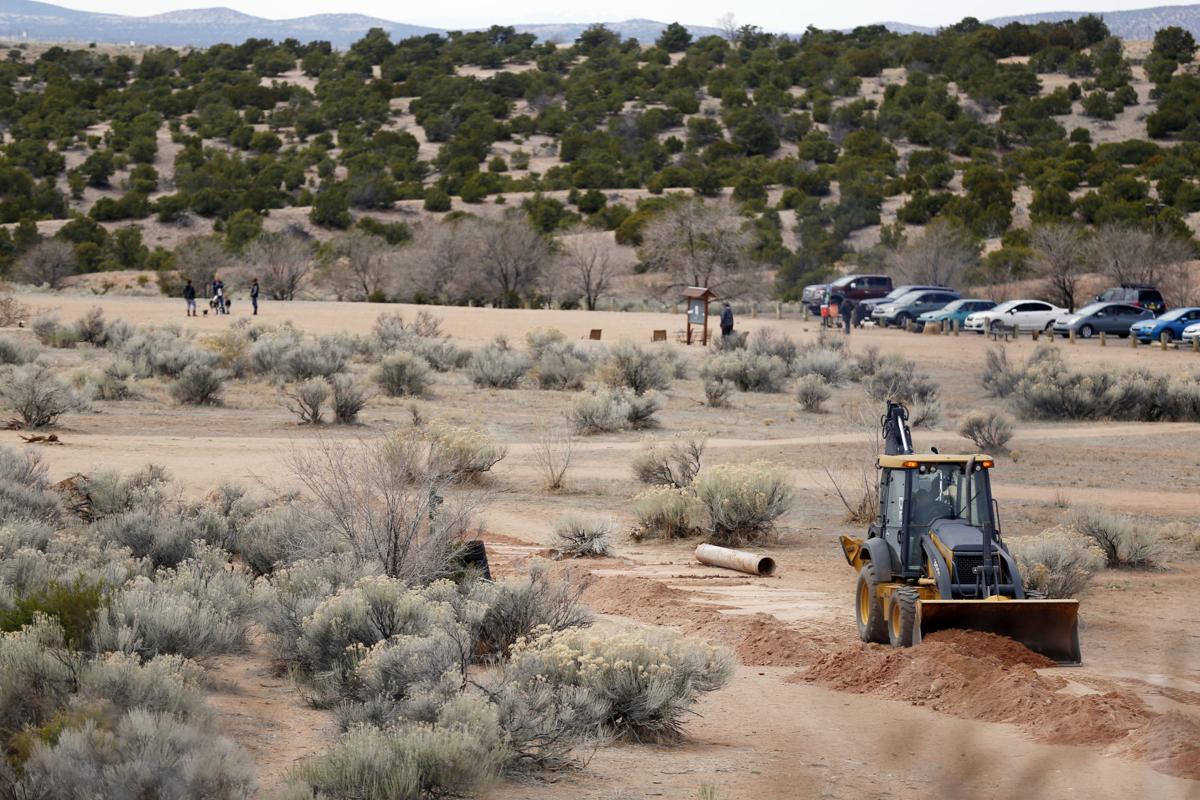 Pete Archuleta, with the city of Santa Fe’s parks division, uses a front-end loader to bury a waterline at Frank S. Ortiz Dog Park on Wednesday.

Pete Archuleta with the city of Santa Fe’s parks division, uses a front-end loader to bury a waterline Wednesday at Frank S. Ortiz Dog Park. The park will have three drinking fountains for pets.

Pete Archuleta, with the city of Santa Fe’s parks division, uses a front-end loader to bury a waterline at Frank S. Ortiz Dog Park on Wednesday.

Fido and Spot will soon have a place to quench their thirst after playing at the off-leash Frank S. Ortiz Dog Park.

The city of Santa Fe is installing water lines at the park this week that will feed three drinking fountains for pets.

The project, which started Monday and is expected to be finished Friday, reinforces Santa Fe’s reputation as a dog-friendly city and enhances residents’ overall quality of life, officials said.

“Dog parks are for dogs, but many, many human friendships have been formed at the dog parks — folks go daily,” City Councilor Signe Lindell said in an email. “I believe the Ortiz park is the most utilized park in the city.”

A group called The Dog Park Project, a nonprofit created to work in partnership with the city to make improvements to the dog park, initiated the work, said John Muñoz, the city’s parks and recreation director.

“The Parks and Rec Department has been working with The Dog Park Project to improve this wonderful asset in our community,” he wrote in an email.

Muñoz called the dog park “a great open space” with 138 acres of trails, arroyos and hills with spectacular views.

“This [is] the largest [dog park in Santa Fe] where dogs can run and play safely off-leash,” he wrote.

Jane Larson, co-founder of The Dog Park Project, said the fountains were donated by the late Bill Thornton, a dog lover who served on a number of charitable boards, including the Santa Fe Animal Shelter & Humane Society.

“John Muñoz … and his crew have been amazing partners and worked diligently with us to fulfill Bill Thornton’s dream of having fresh water available for every dog at the park,” Larson said, adding other city officials, including Lindell and City Councilor Renee Villarreal, were also instrumental in getting the project off the ground.

“We are so grateful for their hard work and dedication,” she said.

The city said portions of the park were temporarily blocked off to install the water lines. But if everything goes as planned, Fido and Spot should soon have free rein — and free drinking water.

Bill Thornton would be so happy to see his contribution to this water fountain project is being used and the dream fulfilled. This is a wonderful tribute to a dear friend who's memory will live on through the beloved dogs who make use of this wonderful addition.

Wow the city is actually doing something!!

There has been fountains there for years, they'll just get shut off in a yea for two like all the other fountains at the parks.

What about the railyard park where there is fountains for young ones that never work?? The same park I took my kids to yesterday and my daughter was running right next to an open needle?? Then a homeless lady came by and started yelling non stop, it was a lovely day.

Maybe Sig can put her name behind that park as well.

Or what about the the other dog parks where the people have to clean it themselves, and install their own gate so dogs cant escape??

Or what about the 2 parks that is assigned for AABC baseball that havent been ranked or cleaned in years, there is wroughting dugouts and thorns all over the place, dirt has hard as concrete, I remember emailing sig on those and her response was "I'm sure it will get taken care of" well, it's been 18 years and it hasn't been "taken care of".

The only thing I've seen done is the new bright red trash cans for needles in the parks. That's a great touch!!

Thank you city of Santa Fe for putting muscle behind the work of Lindell, Munoz and The Dog Park Project Committee. Maintaining the busiest park as the jewel that it is for travelers, the community and our furry loved ones. Please visit thedogparkproject.org to see what else is in the plans and to contribute.

Wow. Very nice, and I think our hound will appreciate it. A tip of the hat to Sig and Rene. That said, given the pandemic and the needs of humans, I hope the city would publicize a way so that those of us who use the park can chip in to reimburse the city for at least some of the costs of this effort.