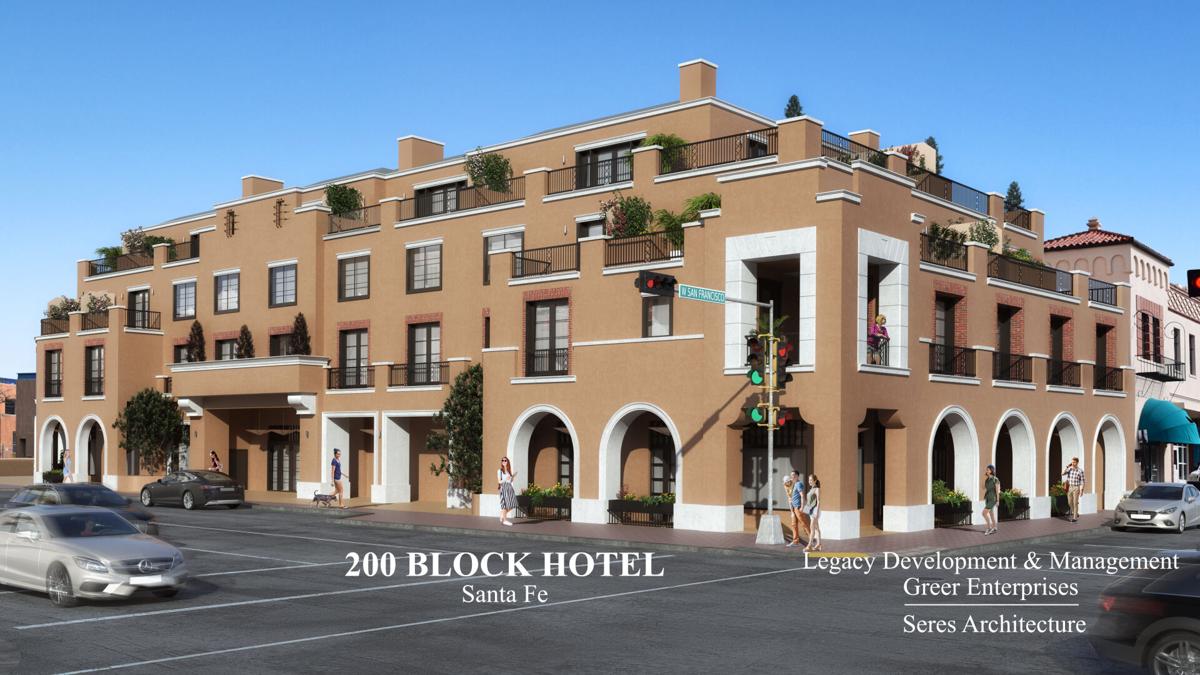 A 70-room Spanish Baroque-style hotel will be built on the parking lot between the Lensic Performing Arts Center and Eldorado Hotel & Spa. 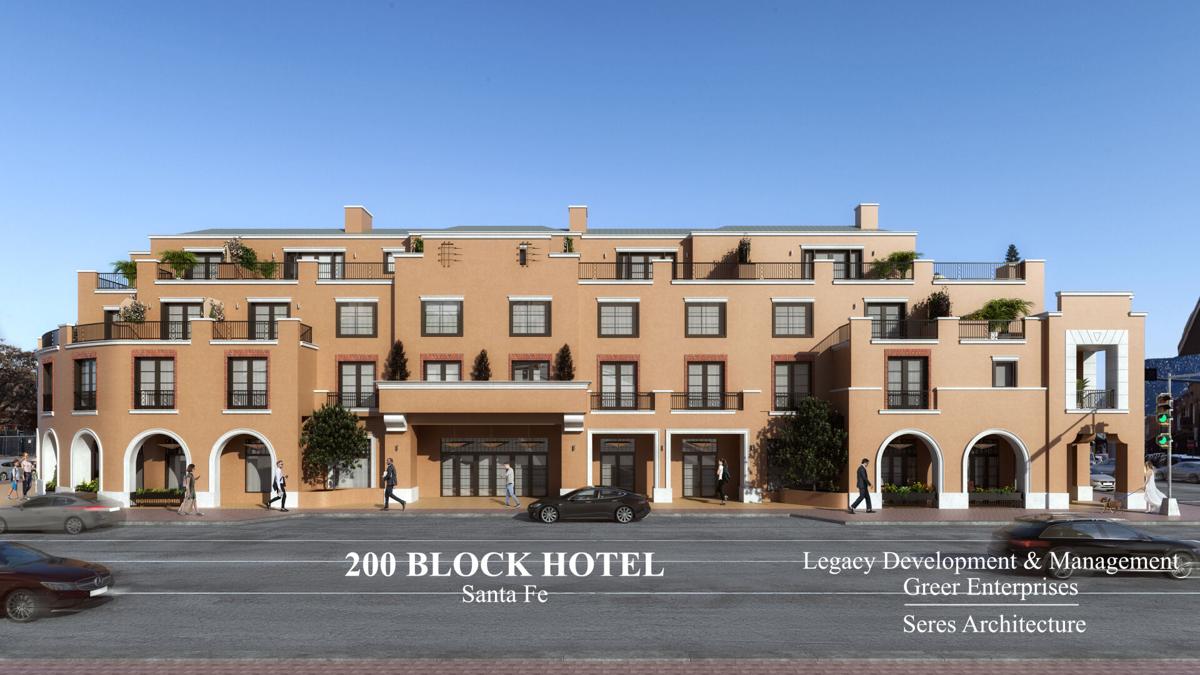 A 70-room Spanish Colonial-style hotel will be built on the parking lot between The Lensic and Eldorado Hotel & Spa.

A 70-room Spanish Baroque-style hotel will be built on the parking lot between the Lensic Performing Arts Center and Eldorado Hotel & Spa.

A 70-room Spanish Colonial-style hotel will be built on the parking lot between The Lensic and Eldorado Hotel & Spa.

A Spanish baroque-style West San Francisco Street hotel in downtown Santa Fe is set to start construction in early 2022 with features not contemplated when the project won initial city approvals.

The $28 million hotel is expected to open in the summer of 2023, said Joseph Karnes, an attorney at Sommer, Karnes & Associates representing Greer Enterprises, which has owned the property for more than 100 years and originally developed what is today the Lensic Performing Arts Center.

The hotel name is pending agreement with an operator, Karnes said.

“It is a very exciting, unique opportunity,” Karnes said. “It’s not your run-of-the-mill standard hotel brand.”

The four-story, 70-room hotel will be located in the surface parking lot next to the Lensic and across Sandoval Street from the Eldorado Hotel & Spa. Seres Architecture of Santa Fe is the project architect.

Greer Enterprises has had false starts for more than 20 years for the parking lot that has been in place since 1972.

A drought nixed a 1999 hotel project. A global financial crisis scuttled a 2008 mixed-use project. The parking question stymied a 65-room hotel plan in 2017 by Legacy Development & Management, which since then has solved the parking conundrum.

The West San Francisco hotel — earlier referred to as 200 Block Hotel — will be the first downtown Santa Fe hotel built from the ground up since The Hacienda at Hotel Santa Fe in 2001.

“There is always demand for another downtown hotel,” said Randy Randall, executive director of Tourism Santa Fe, the city’s convention and visitors bureau. “The location is terrific. The quick recovery we have seen from COVID speaks to the demand for Santa Fe.”

Randall said he does not see downtown reaching a saturation point with hotels.

“Short-term rentals literally doubled the number of rooms downtown in the last 15 years,” he said. “It shows there is elasticity in the market.”

Albquerque-based Legacy Development & Management is finishing up construction on the Markana Apartments on Richards Avenue and earlier developed the Hyatt Place Santa Fe. Legacy approached Karnes in 2016 to build a downtown hotel and non-downtown apartment community.

The .30-acre property bounded by San Francisco Street, Sandoval and Palace Avenue proved insurmountable for vehicle ramps into an underground parking garage. But Legacy did not give up.

“We need to get rid of the ramps. How do we do that?” Karnes recalls Legacy’s President of Construction Faizel Kassam asking. “The lift analysis became an elevator analysis.”

Legacy first considered car parking lifts, where valets “stack” cars on top of each other in garages. It then discovered commercial vehicle elevators and found one at a hotel in Denver.

Legacy conferred with the Denver hotel and will install two 21-by-10-by-8-foot ThyssenKrupp vehicle elevators for the two-level, 116-space garage. Customers will not drive on the elevator or in the garage.

“You drop off your car with the valet [at the front entrance],” Karnes said. “You call up your car by the touch of a button. The concierge will have the car coming up to you. Both of you [you and your car] get to the same place at the same time.”

Guests also can use the municipal garage across San Francisco Street from the hotel, and the hotel will lease 11 spaces in the Archdiocese of Santa Fe parking lot for oversized vehicles. A valet will retrieve those vehicles for guests, Karnes said.

“One of the main things is the hands-free part of it,” Karnes said. “The customer experience is built into the phone.”

Guests will use a phone app to retrieve cars, communicate with the concierge and other hotel personnel, get tourism information, and plan the guest experience inside the hotel. An automated check-in systems is still in development.

“The pandemic has elevated all aspects of cleaning and sanitizing all aspects of hotels,” Karnes said. “Next to hospitals, hotels are among the indoor environments where guest/visitor expectations for cleanliness are highest. The major brands have adopted new more stringent standards for documenting both pre- and post-visit cleaning.”

As guests make reservations online, they will be notified of the hand-free aspects to staying at the hotel in the fine print.

“We will try to make it big print to make you aware that you will be using your phone,” Karnes said.

Hope the designers specific impact resistant glazing on the west facing windows. Rabble rousers who frequent the Eldorado are known for throwing objects from the upper floors.

[lol]Oh Susannah, don't you laugh for me! ¡Toss no mass![whistling][cool]

This edifice is certainly not "your run-of-the-mill" ugliness.

Wow, there goes the neighborhood. Move over Wm. Zeckendorf Jr. & Co., we now have the estate of Greer Garson on scene to further spoil Santa Fe.

Huh. I too can't quite picture where, but am having flashbacks to the Eldorado going up. Huh.

And help me here, I can't quite picture where this will be or how it will be cited. Isn't there a block of shops between the Lensic and the El Dorado?

The drawings do not accurately reflect the street width. There are three lanes where this hotel will be--two on the opposite side of the street--yet you are supposed to pull your car up to the front entrance on Sandoval--is that a real pull-out? Will the cars constantly be going over the sidewalk to get to the pullout or is the pull out the actual vehicular lane on Sandoval. Despite much questioning from V-C, that aspect was not questioned. My guess is that the corner there will become a traffic nightmare. And is the hotel renting spaces in the city parking lot? Where do other visitors get to park if these hotels buy space in public parking lots as opposed to providing their own parking onsite. Another massive bldg with an elaborate parking system that will be subject to all kinds of tech difficulties.

I agree Stefanie. It will be a nightmare in what is already one of the biggest traffic congested intersections in downtown. Traffic already knots up here, especially when San Francisco Street is closed for events. It is hard to see how cars won't be backed up, motors running waiting for their turn to pull in and have their car whisked away in an elevator. Hotels have check-in and check-out times. This narrow street will be an exhaust fume nightmare. Designing for cars then people is a last century concept no matter the proposed decor inside.

True. Another mess in the making.

Many visitors to Santa Fe are older, and may not be familiar with apps/smartphones.

Have the new hotel owners planned for that contingency?

If someone is so old they can't use a smartphone in 2021 I'd figure they're too old to travel alone, so probably will have a younger relative or friend to accompany them.

I'm glad this hotel is implementing 21st century technology. Santa Fe has been decades behind the modern world for too long, haha.

Emily Koyama – Pretty sure that the Uber-rich who can afford to stay there, will have an attendant to manage those sorts of mundane tasks.

Great to see this parking pad for vehicles become a home away from home. And employing high tech to managing vehicles is a very urban, forward thinking solution.

I wonder if the City has a traffic volume and pedestrian safety study available? Most developers are challenged to demonstrate the impact of this kind of change. Also, the rendering looks a lot more like Mission Revival architecture like the Castaneda Hotel in Las Vegas. Think the newspaper should look this up.

Speaking of employees, where will they park?