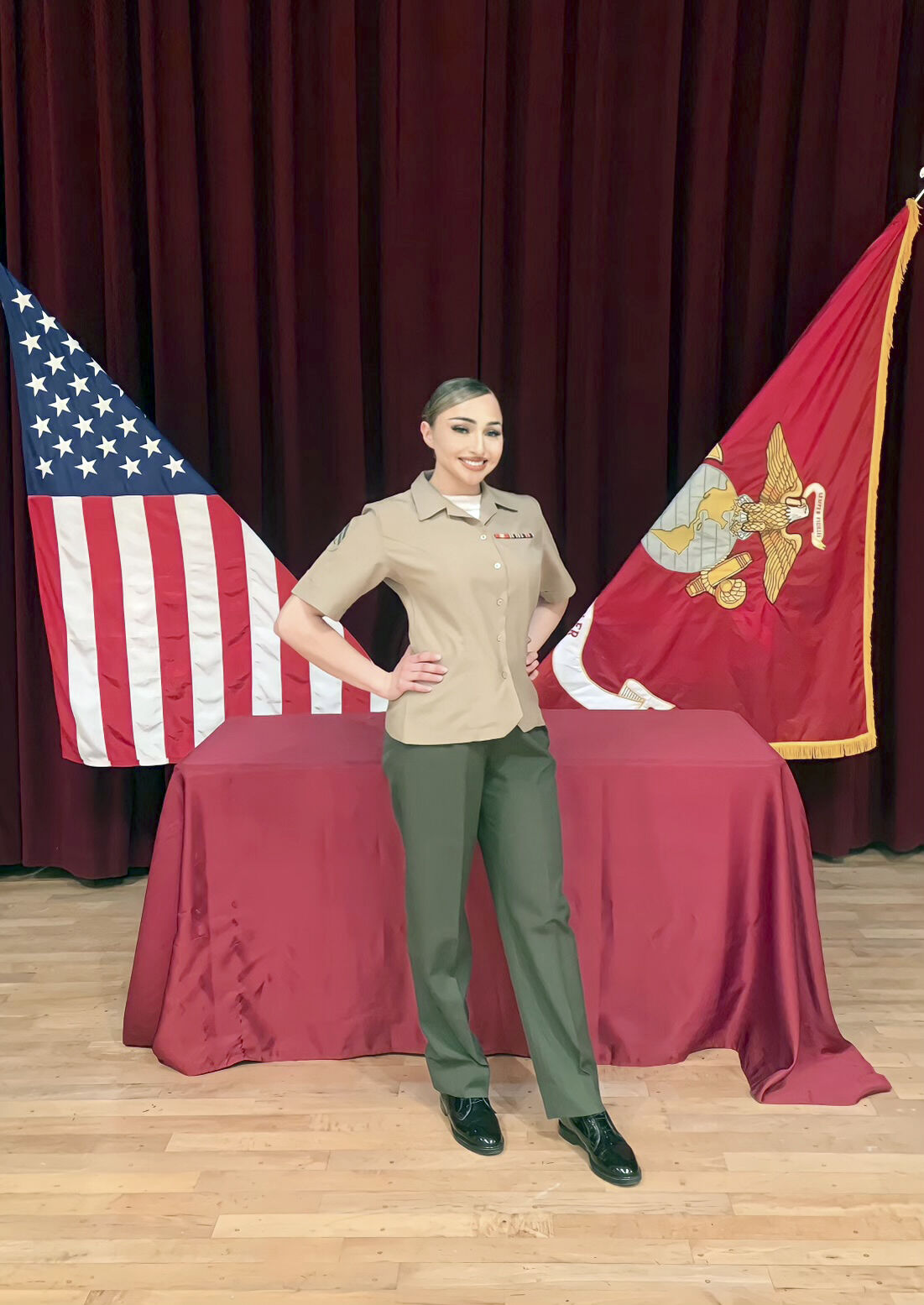 Marine Cpl. Rachel Rael, a Santa Fe High graduate, was chosen from 70 finalists to be Marine of the Year among the branch’s administrative personnel. 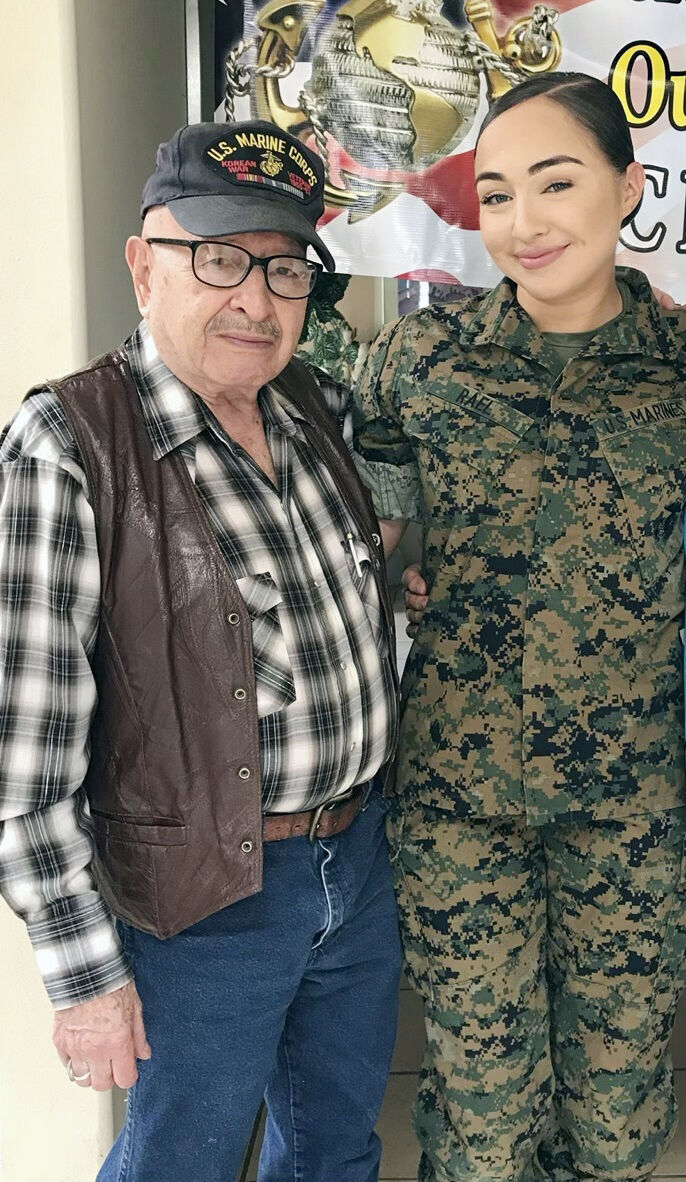 Marine Cpl. Rachel Rael and her grandfather, Richard Madrid, who joined the Marines in 1953 and served during the Korean War.

Marine Cpl. Rachel Rael, a Santa Fe High graduate, was chosen from 70 finalists to be Marine of the Year among the branch’s administrative personnel.

Marine Cpl. Rachel Rael and her grandfather, Richard Madrid, who joined the Marines in 1953 and served during the Korean War.

After spending one semester at the University of New Mexico, Rachel Rael decided college wasn’t for her.

As she drove home to Santa Fe, she thought about her future and what she wanted to do with her life. During the hourlong drive, she decided to enlist in the Marines Corps.

Today, Rael is stationed in Okinawa, Japan, where she serves as a corporal. She recently was recognized as Marine of the Year among the branch’s administrative personnel. According to the Marine Corps, she was selected out of 70 finalists.

“The Marine Corps was always on my mind, but I thought, ‘OK, I’ll try college,’ ” she said in a recent interview. “It feels cool to have the award and be able to show I’m as capable as anyone.”

Rael, 20, grew up in a military family. Her father, Richard Rael, is a former Marine who was a colonel in the Army during the invasion of Iraq. He raised her on Full Metal Jacket and trips to Questa to visit his father, an Army vet, who told her to never join the Air Force or Navy. There, she grew up camping and riding horses and first shot a gun at 17.

Her maternal grandfather, Richard Madrid, joined the Marines after graduating from St. Michael’s High School in 1953 and spent time near the 38th parallel during the Korean War.

“I tried to push her to go to college, saying, ‘Trust me, it’s better to be an officer than to be enlisted,’ “ Richard Rael said. “We met at Santa Fe Baking Company and she told me, ‘Dad, this is my decision.’ It took me by surprise a little bit, but I always thought she might go down the military path.”

Rachel Rael served in the ROTC program at Santa Fe High School and said she always preferred the weight room to organized sports. She still wakes up at 4:45 most mornings in Okinawa to work out, and she can deadlift 225 pounds.

Her other passion is painting. During her junior year in high school, she took an Advanced Placement art class and passed with a college-level portfolio. Her paintings portrayed animal life destroyed by development and climate change, with elephants escaping poachers and seals swimming through trash.

“I really feel like she will bring compassion and creative thinking and kind of a humanistic understanding of our world to the military culture,” said Lori Andrews, who taught Rael for three years at Santa Fe High and considers her a favorite student.

“As a woman of color and an artist, she’s just compassionate, she’s creative, she’s going to bring this understanding of her world to the military culture. I think that’s why she’s already standing out as a leader. … I just feel like she just has moxie.”

Rael left for boot camp in South Carolina in January 2019 and graduated that April on her mother’s birthday.

“She told me at graduation, ‘Dad, that wasn’t hard,’ “ Richard Rael said. “I think there’s less cussing these days.”

She also trained in California and North Carolina before being deployed to Japan in August 2019 on her first trip out of the country.

As a corporal, she mostly manages deployments and payments, and she said she wants to become a drill instructor who trains new recruits.

In Okinawa, she’s met one other New Mexican. Rael said she misses mountains, sopaipillas and enchiladas, though her grandmother sent her biscochitos for Christmas.

“I wanted to join the Marines since I was in fourth grade,” Rael said. “Now that I’m here, well, I’m not really sure what my plan is. But I think I’ll stay enlisted for a little while.”

What a wonderful young woman making a difference. This story should have been on the front page. How proud he family must be.

Congratulations on your accomplishments!

Thank You for your service!!!

Great story, and congratulations to an impressive Corporal!

That is a really great grandsma to send biscochitos!!!