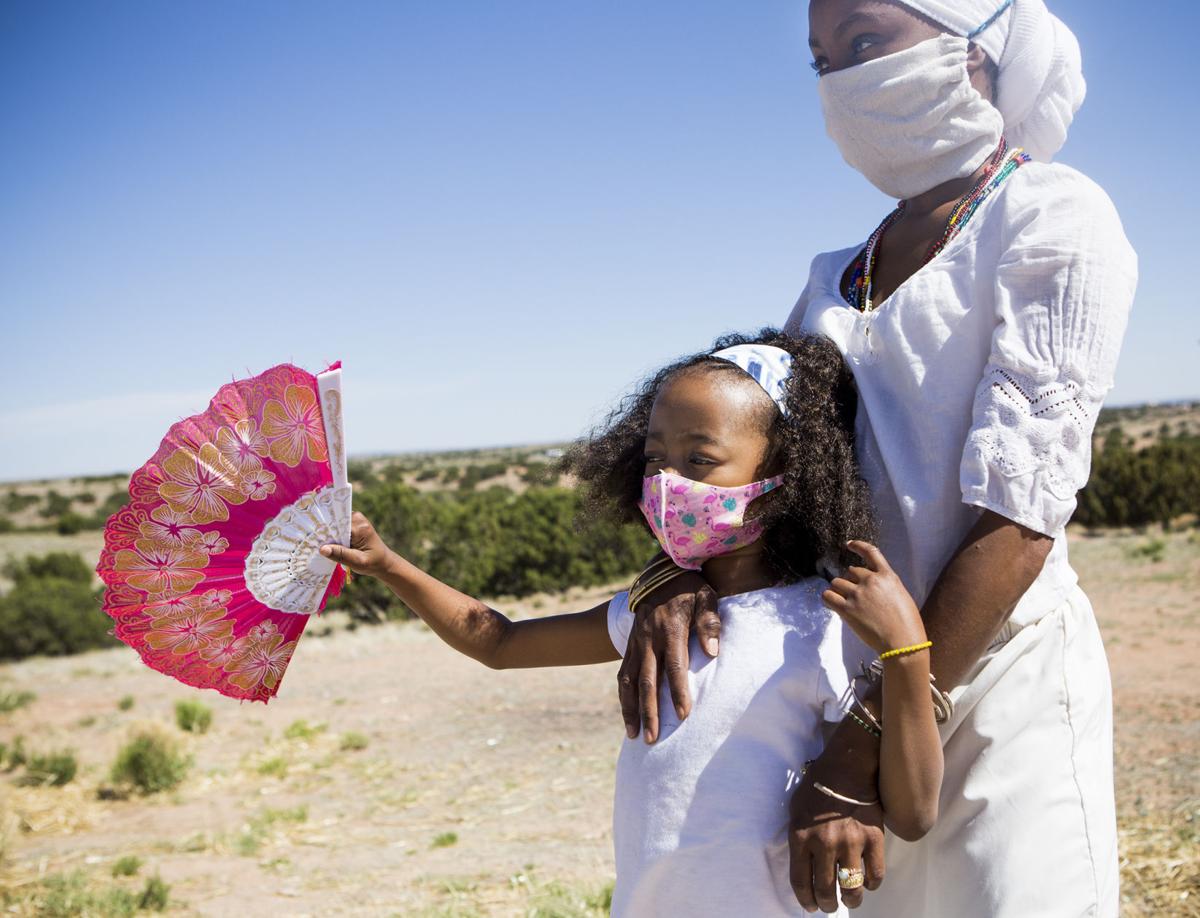 Tintawi Kaigziabiher holds Hahnah, 8, who has sickle cell anemia, as she plays with a folding fan earlier this month outside of their Santa Fe home. Hahnah will get a bone marrow transplant — the only known cure for the disease — from her older brother, Navi. 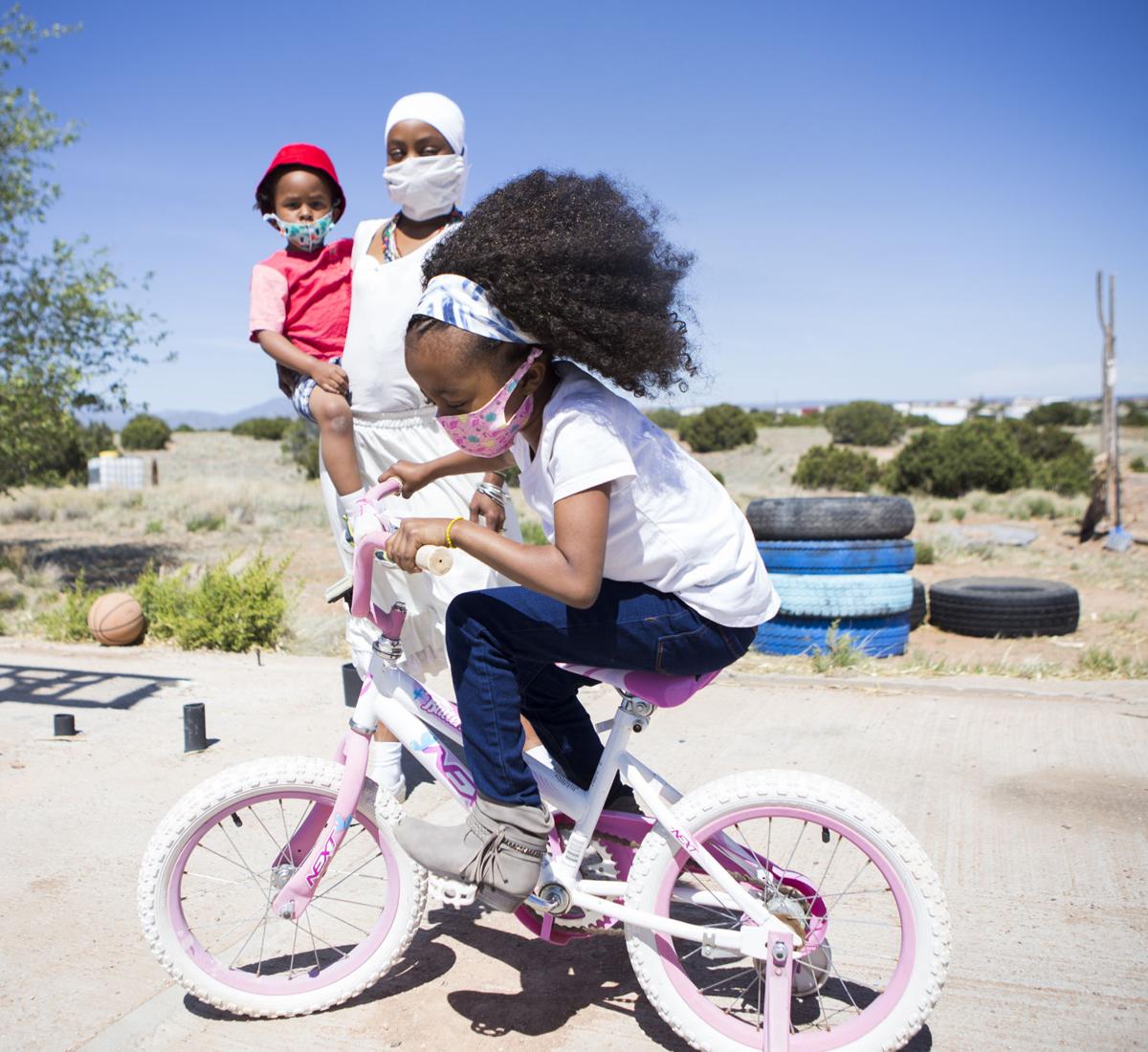 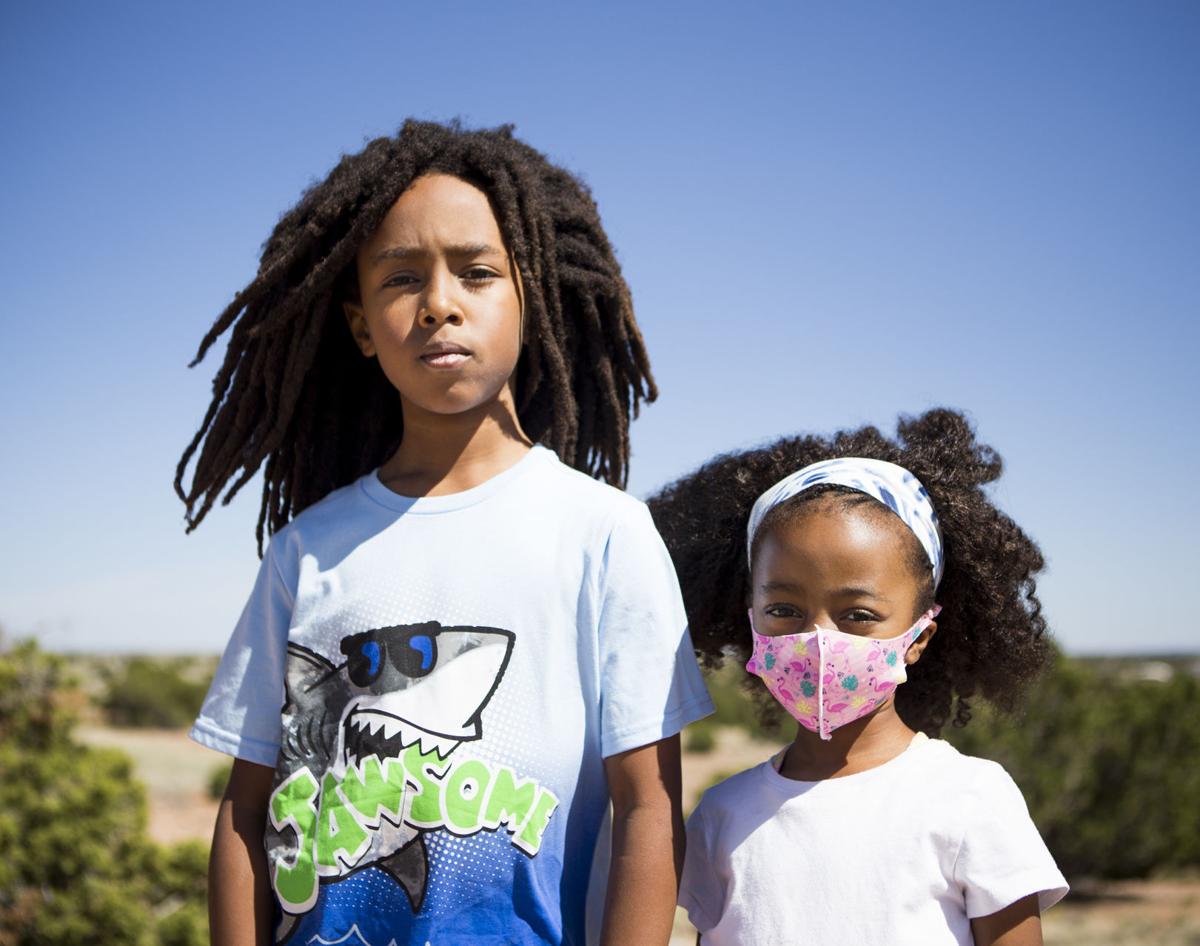 Navi Kaigziabiher, 10, and his 8-year-old sister Hahnah stand outside their home. 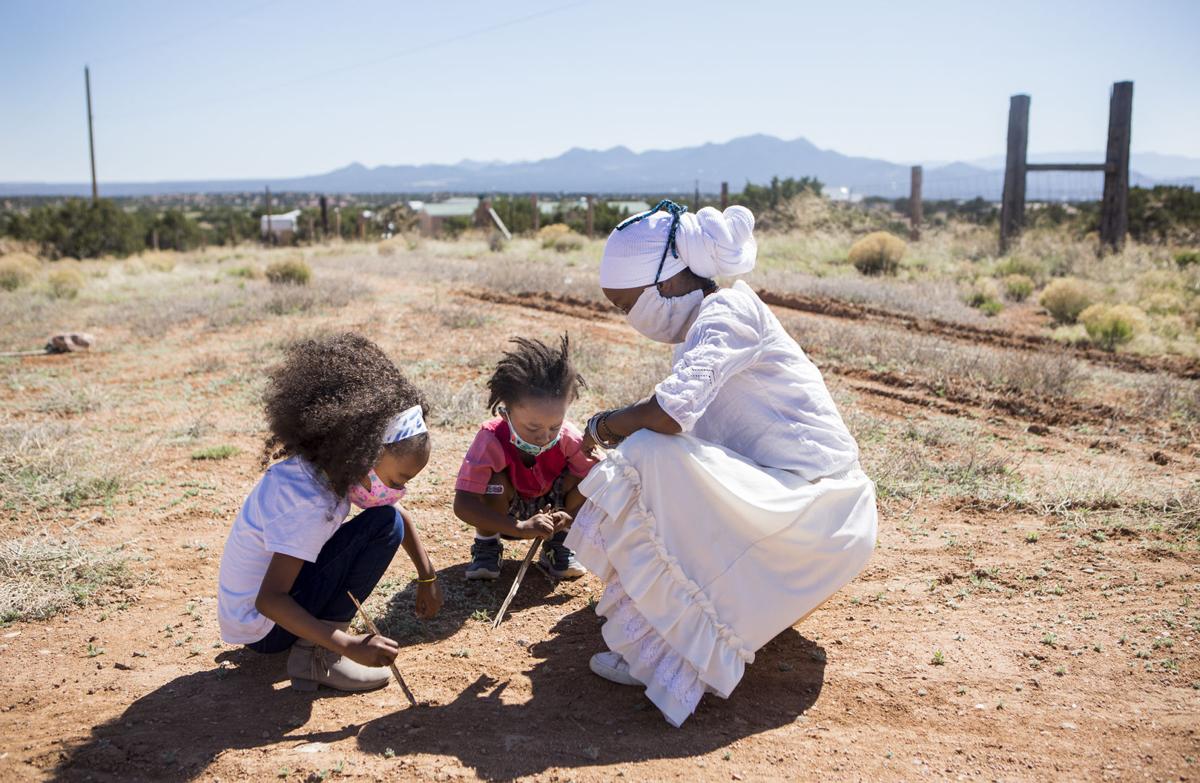 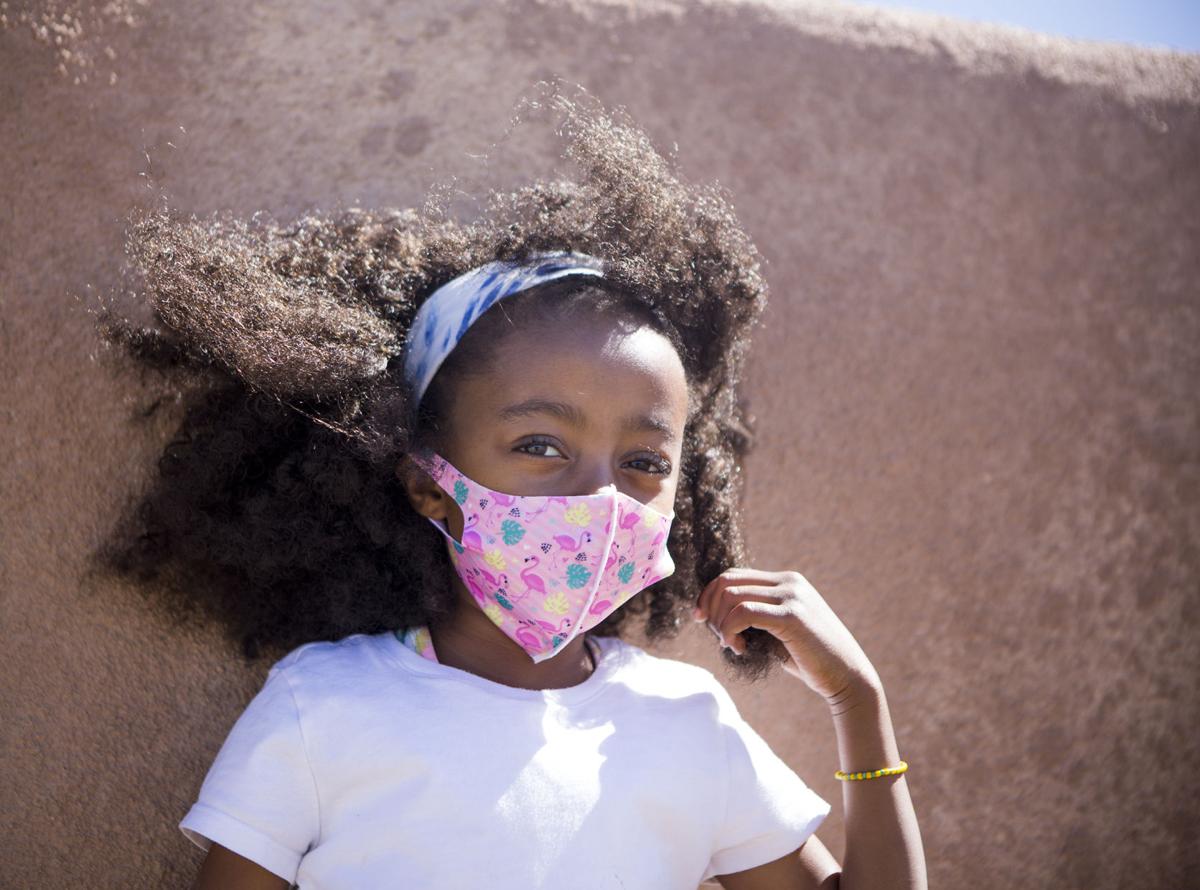 Hahnah Kaigziabiher, 8, will undergo a bone marrow transplant this June in hopes of curing her sickle cell anemia. If the surgery goes well, she could be come the first-known resident of New Mexico to be cured of the disease, local doctors say. 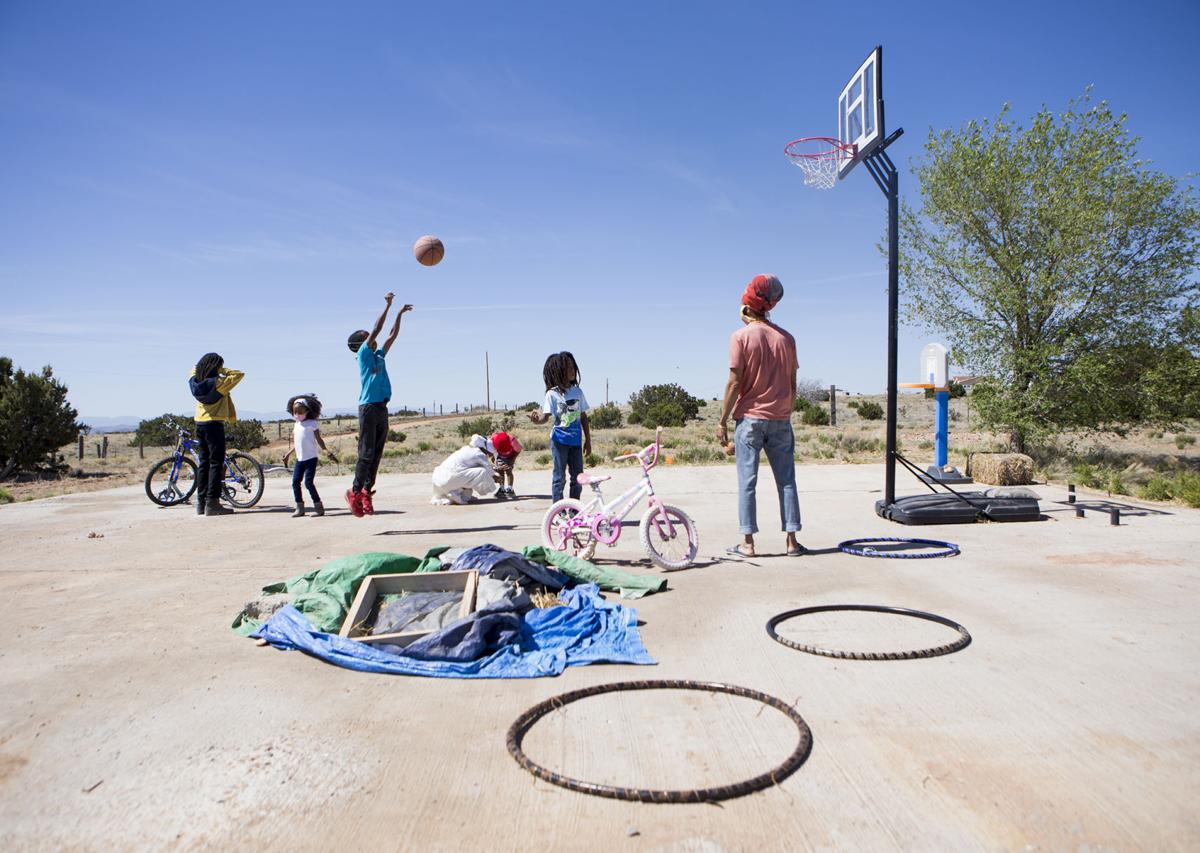 The Kaigziabiher family gathers outside their home near Cerrillos to hula-hoop and play basketball. Here, Aum, 13, makes a shot.

Tintawi Kaigziabiher holds Hahnah, 8, who has sickle cell anemia, as she plays with a folding fan earlier this month outside of their Santa Fe home. Hahnah will get a bone marrow transplant — the only known cure for the disease — from her older brother, Navi.

Navi Kaigziabiher, 10, and his 8-year-old sister Hahnah stand outside their home.

Hahnah Kaigziabiher, 8, will undergo a bone marrow transplant this June in hopes of curing her sickle cell anemia. If the surgery goes well, she could be come the first-known resident of New Mexico to be cured of the disease, local doctors say.

The Kaigziabiher family gathers outside their home near Cerrillos to hula-hoop and play basketball. Here, Aum, 13, makes a shot.

In so many ways, Hahnah Kaigziabiher is just like any other 8-year-old girl: She’s extraordinary.

She loves riding her bike, hula-hooping and playing games with her brothers. She’s got “a lot of friends, but three are my best friends,” she said. Her favorite movies are Bratz: The Movie and The Cheetah Girls — films that reflect her own brand of sassy, yet sophisticated, spunk.

And she’s got a long list of dreams she’s determined to make come true.

“I want to be a singer, a dancer, a model, an astronaut — although I’m not sure about that because some rockets don’t come back to Earth — president, a baby doctor and a makeup artist for people who do movies,” Hahnah said confidently, her brown eyes blinking beneath exceptionally long lashes.

But one thing that makes Hahnah extraordinary also threatens those dreams and even her life.

The Santa Fe girl is one of an estimated 75,000 Americans with sickle cell anemia, a disorder that misshapes red blood cells — “in a moon shape, a crescent moon,” she said — and can cause blood clots, eventual organ failure and other long-term health complications, such as strokes and infertility.

After several frightening experiences with “sickle cell crises” — episodes of intense pain caused by the condition — as well as instances of anaphylactic shock related to a growing list of allergies to medications, Hahnah's family began wondering if they should consider a bone marrow transplant, the only known cure for the disease.

Given that Hahnah’s organs are still relatively healthy and she is likely to develop more treatment allergies the longer she waits for a transplant, doctors said now is a good time for the surgery.

Hahnah already has a willing donor who's a 100 percent match: her 10-year-old brother, Navi.

In just over a week, Hahnah, Navi, their parents and three other siblings will travel to Children’s Hospital Colorado in Aurora, Colo., in hopes that Hahnah will be cured of the life-threatening disease.

“There’s no one here that we know of, period, who’s gone through the process,” Hahnah’s mother, Tintawi Kaigziabiher, said, noting the hematology and oncology team at University of New Mexico, which has worked with Hahnah for at least four years, “said she’s the guinea pig" and could potentially be the first known person in New Mexico cured of the disease.

Neither the hospital nor the state Department of Health could confirm that.

Though Hahnah admitted she’s “a little bit scared,” she said she feels certain her brother is "going to help me cure this.”

Sickle cell anemia can cause a weakened immune system and heightened pain caused by minor injuries, such as when a person falls. Another notable feature of the disorder is that it can cause a patient to feel extreme pain from cold temperatures.

Hahnah cannot go swimming and must stand in front of a heater as soon as she exits the shower.

Tintawi Kaigziabiher said Hahnah had her first crisis after swimming at the Genoveva Chavez Community Center when she was 18 months old. She “woke up that night screaming” in pain, her mother said, noting Hahnah swam only one other time, in a very warm pool, during a Make-A-Wish trip to Disney World in 2018.

There have been other traumatic experiences as well, like when Hahnah was hospitalized for two weeks after suffering from acute chest syndrome in May 2017.

Then there was the time she went into severe anaphylactic shock in December 2018 after developing an allergy to morphine. That was the only time her mother was genuinely worried Hahnah might die.

Although the family has known a bone marrow transplant was an option since Hahnah's birth, it wasn’t until last year that doctors started seriously talking about the pros and cons of the procedure.

In January 2019, health care professionals encouraged the family to find out if any of Hahnah’s brothers — 16-year-old Noh, 13-year-old Aum, 10-year-old Navi and 3-year-old Kidus-Andrayos — were a match.

Up until then, the family had speculated “the risk outweighed the benefit, which is what kept us waiting,” the mother said.

But that has changed.

“She’s had a hard time already, and she’s only 8,” Tintawi Kaigziabiher said. “Waiting seems like just as much of a gamble as doing this.”

Sickle cell anemia is especially prevalent in African American communities. One of every 365 black babies are born with the disease, and 1 in 13 carry the trait. The Kaigziabihers, who are of Ethiopian descent, said they’ve known a handful of people with the disease who died in their 30s because “they didn’t have this option.”

Either they lacked a bone marrow donor or their organs were already too weak to undergo surgery.

Tintawi and Isatu Kaigziabiher said they let Hahnah and Navi decide whether to pursue the transplant. “We weren’t going to force it,” Tintawi said.

Navi admitted he was scared at first but said talking with doctors about the procedure changed his perspective.

"Helping my sister get rid of sickle cell brings me joy," he added. "She won’t have as much pain anymore.”

On June 2, the family will head out of Santa Fe to begin what is expected to be a long process. First, Navi will have his bone marrow harvested. Because of risks from the COVID-19 pandemic, he and Hahnah must be separated.

After Navi’s surgery, Hahnah will undergo a series of lab tests and MRIs; a blood transfusion to receive hemoglobin A, which her body does not produce; and a minor surgery to insert a central line into her chest to administer chemotherapy and other medications.

The transplant is scheduled July 1.

Isatu Kaigziabiher — known as “Abba” to the kids — is a cytogeneticist with LabCorp. He plans to return to Santa Fe with the boys sometime in August after a monthslong absence from work. Hahnah and Tintawi will return sometime in September or October “at the earliest,” the mother said.

Hahnah will remain at home for a full year, missing what would have been her third grade year at Turquoise Trail Charter School. The family will have to maintain a sterile home environment, which also hosts doves, a gecko and a cat, Tintawi Kaigziabiher said.

COVID-19 has heightened the emotional strain of the transplant process, she added.

“COVID sucks, it really does," she said. "This was already hard, and now it’s even harder.”

Still, Hahnah is looking forward to life after the transplant. She said she hopes it will end her allergic reactions and allow her to go to the pool.

"I just want to get it over with so I can eat wheat — and I want to swim," she said.

As for her family members, they said they’ve put their trust in God that they’re making the right move.

“I have nothing but complete faith it will work out, or otherwise I couldn’t go through with it,” Hahnah's mother said. “It gives her a chance for a normal life … to have her same energy, her same dreams.”

A chance to be extraordinary.

Hahnah Kaigziabiher, an 8-year-old Santa Fe girl, is preparing to undergo a bone marrow transplant in hopes of curing her sickle cell anemia. Her brother Navi, 10, is the donor.

Although the family's health insurance will cover the majority of the children’s medical costs and their stay in Aurora, Colo., during the series of procedures, the family hopes to raise at least $40,000 to help cover food and other costs.

They have launched a GoFundMe campaign that so far has raised $20,000. To learn more or to donate, visit gofundme.com/f/Sickle-Cell-Support-Fund.

My daughter is 8 years post transplant. Sending prayers to the family.

Blessings and prayers for my granddaughter Hahnah, my grandson Navi who is brave, caring and strong, my daughter Tintawi and entire family as they embark on the cure.

So proud and hopeful for this beautiful family. Much love to you all!!!!

Wishing the family the most positive of outcomes and when Hahnah is home and feeling up to it, I'd love to gift her a new hula-hoop from my shop, Rabbit Wheel Studio. [beam]