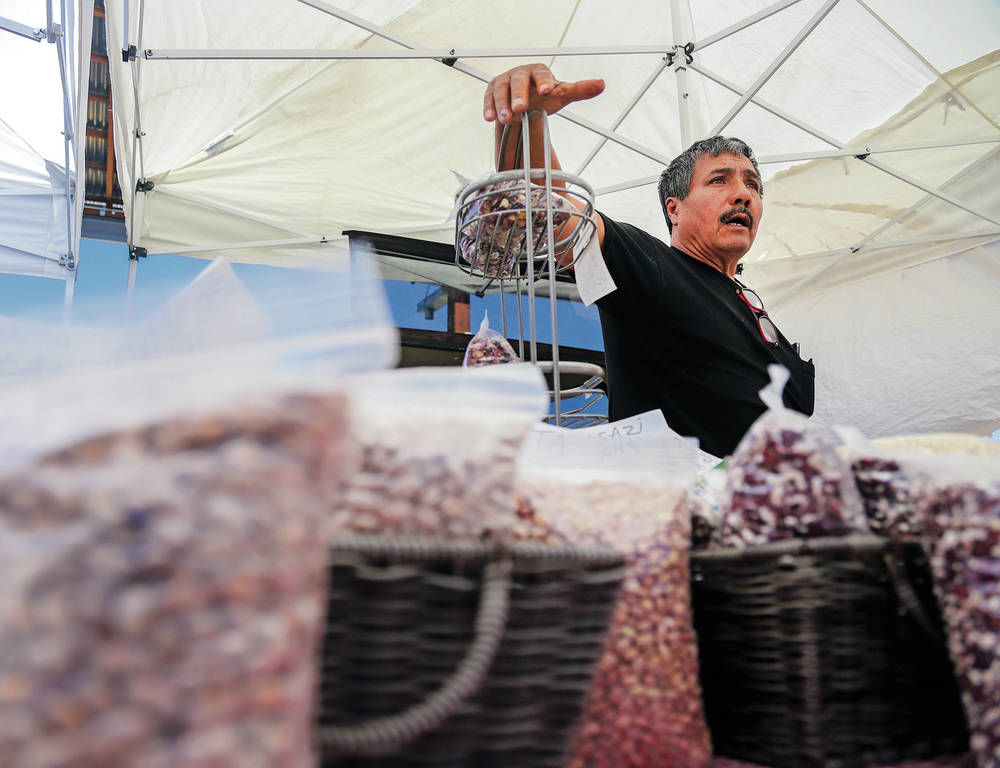 Jesus Guzman, a farmer based in Nambé, speaks about the hardships of farming in a drought at Tuesday’s farmer’s market at the Santa Fe Railyard. “I haven’t seen anything like it since 1996,” he said of this year’s dry weather. Gabriela Campos/The New Mexican 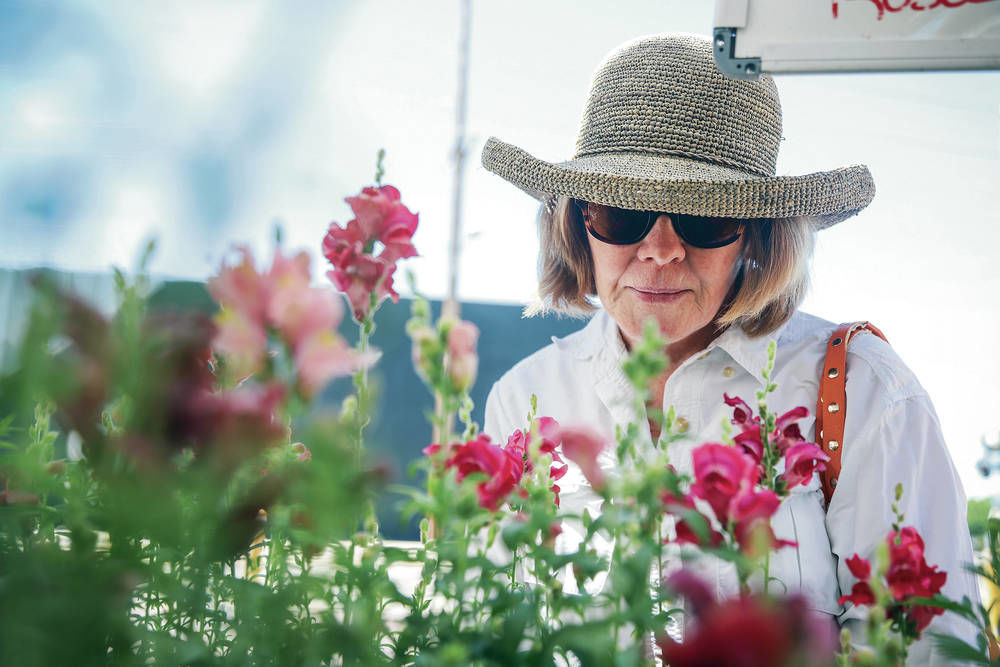 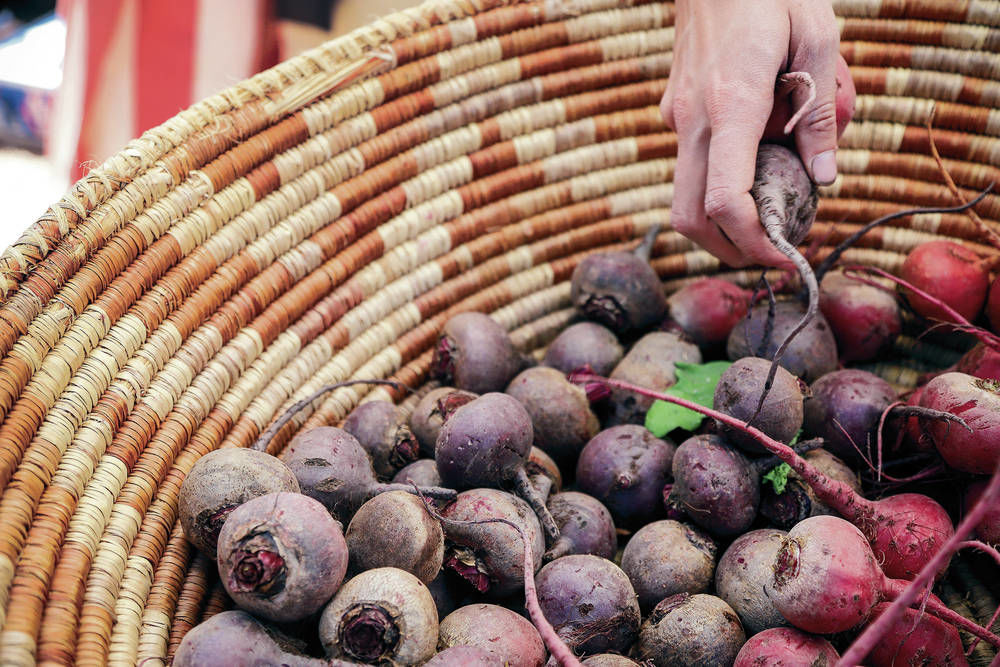 Tess Gundersen, who runs Mr G’s Organic Produce with her parents, reaches for a handful of beets at Tuesday’s farmers market at the Santa Fe Railyard. Gabriela Campos/The New Mexican 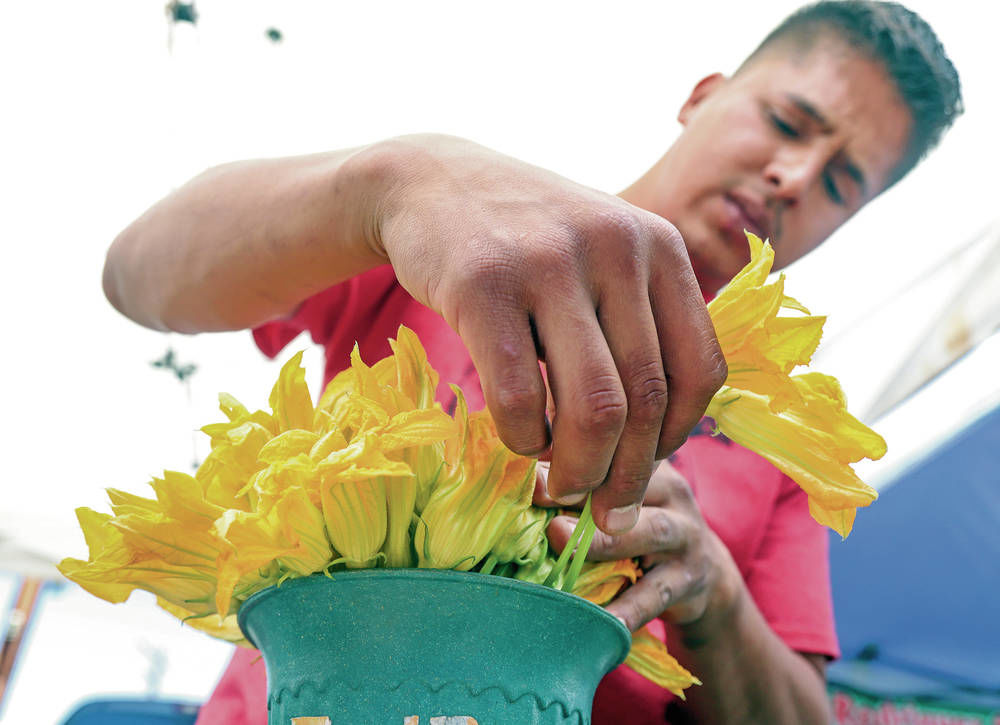 Jesus Guzman, a farmer based in Nambé, speaks about the hardships of farming in a drought at Tuesday’s farmer’s market at the Santa Fe Railyard. “I haven’t seen anything like it since 1996,” he said of this year’s dry weather. Gabriela Campos/The New Mexican

Tess Gundersen, who runs Mr G’s Organic Produce with her parents, reaches for a handful of beets at Tuesday’s farmers market at the Santa Fe Railyard. Gabriela Campos/The New Mexican

By the time the Nambé bean and chile farmer reached the Santa Fe Railyard at 6:30 a.m. for the Tuesday farmers market, the sun had peaked above the horizon and started its ascent into a cloudless sky, the azure expanse promising yet another rainless day.

For Guzman, who has sold his produce at the market for more than 30 years, drought is a hazard of the trade. Still, he said it’s been a while since he’s seen a year like this.

“It’s a severe one,” Guzman said from his booth later that morning as a slow stream of shoppers passed by and the temperature crept toward 90 degrees. “I haven’t seen anything like it since 1996.”

For Guzman and many of his 140 fellow vendors at the Santa Fe Farmers Market, the double whammy of a nearly snowless winter and a nearly rainless spring cuts deep. Fields are lying fallow, crop yields are down in some cases by 30 to 40 percent, and farmers are hawking fewer varieties of fruits and vegetables — if they’re able to make it to market at all.

Some farmers have had to cancel their booth reservations at the last minute because Saturday — the market’s biggest day — is their only day to receive irrigation water from their acequias. Others are opting out of the whole market season. Still others are selling their wares for now but can’t say how long they’ll be able to go on.

Unless rain falls soon over the 6 or so acres he’s planted this year, Guzman said he might run out of water entirely and have to watch his crops wilt and die.

He estimates he has about four weeks left of thirst-quenched fields — two thanks to a recent watering from his acequia and another two from an irrigation pond on his property. That’s despite the fact that he only planted half of his acreage this year.

Guzman has had his fair share of sleepless nights, but for now, he said, he should be fine.

He sells beans and chile – dried Southwest staples that keep well over winter in his storage shed. The varietals on sale at Tuesday’s market – pintos, bolitas, Anasazi beans, chicos and a range of chiles, red and green – are from last year’s haul.

If this year’s harvest doesn’t survive, he said, next year could be devastating.

Though she’s worked for the market in the past on the management side, this is her inaugural year as a vendor herself. Yozell-Epstein and her partner, Matt Ladegaard, own Pojoaque-based Ground Stone Farm, an organic-practices farm on 3 acres.

This year, they opted to plant 1 acre.

“We use very little, but it’s still not quite enough,” she said.

The duo has had to cut back on thirsty greens like spinach in favor of hardier produce that promises more bang for the buck.

“It’s an intense first year,” she said. “We think about that. … We’re doing a huge investment, we’re taking a lot of risks, and any year after this will probably be easier, so we’re, like, setting ourselves up.”

Not everyone’s struggling this year.

Despite a cold snap in mid-April, when temperatures fell to 26 degrees, Pat Montoya is one of the lucky ones — a reminder that winning the water lottery in New Mexico often comes down to location.

Montoya, a third-generation farmer whose fruit and cider slushies are favorites among the market’s youngest shoppers, gets his water from the Rio Grande.

As far north as Velarde, where 80-year-old fruit trees dot the landscape of Montoya’s orchard, the Rio Grande doesn’t run dry. And so, his crops rarely go without.

This year was a banner year.

“We have a lot of fruit this year,” he said. “Last year was kind of light. We didn’t have near as much. This year, we have a bumper crop. We’re looking really good.”

When farmers struggle, the market does too.

The market makes its money through annual fees and booth fees, both paid by farmers. So when farmers don’t show up, it hurts — though market directors said they won’t know the extent of the damage for a few months.

Fueled largely by donations, the institute’s success doesn’t hinge on crop yields or adequate rainfall, so Pickens said she views her role this year as one of assertive helper.

So far, aside from the usual farming workshops, she’s not sure what more she and her colleagues can do but listen.

“I wish we could say we’ve got this silver-bullet solution,” she said. “But right now I think we’re … trying to understand the situation we’re in so we can think about this with a longer goal of how we can help. I think we’re all realizing that this is probably the new normal.”