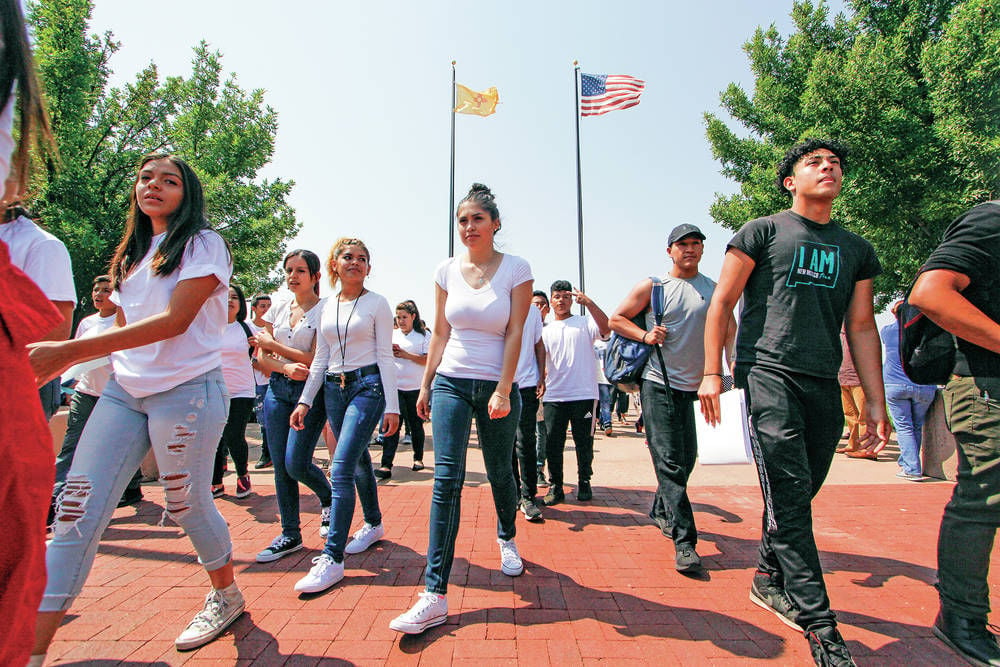 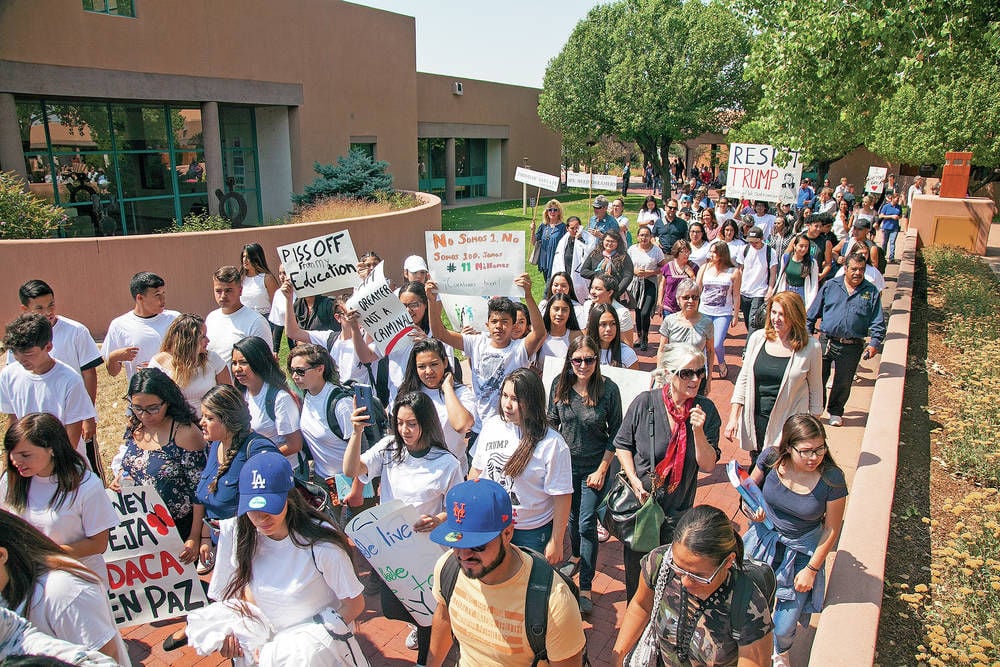 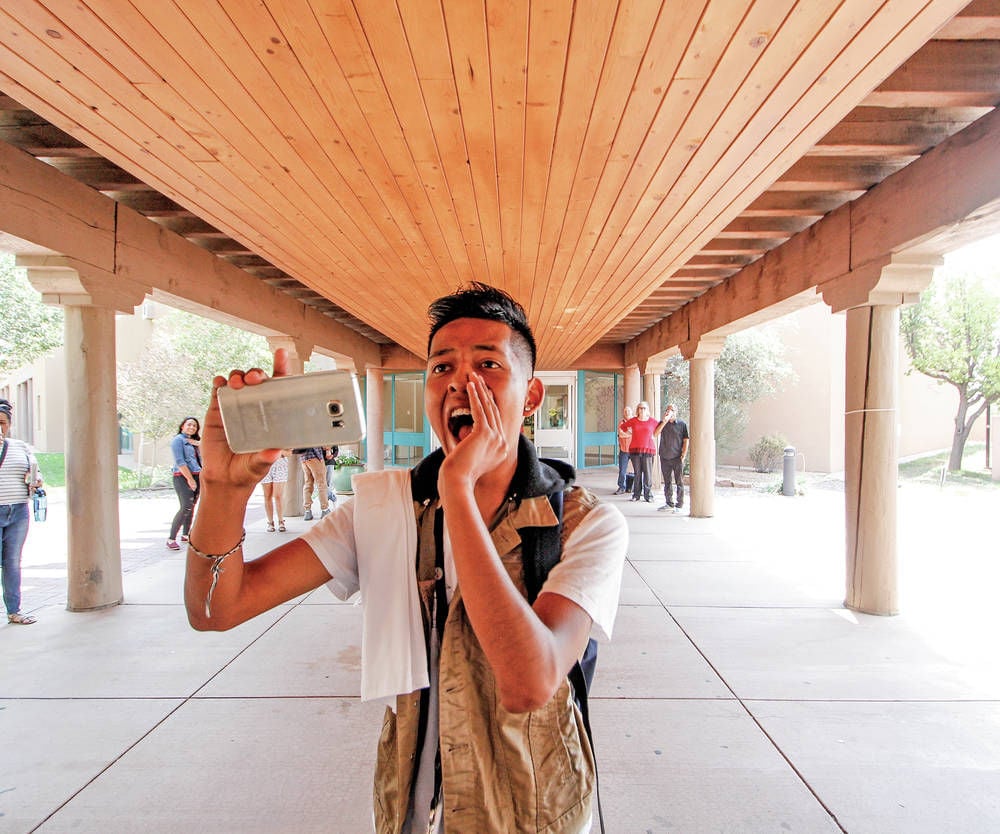 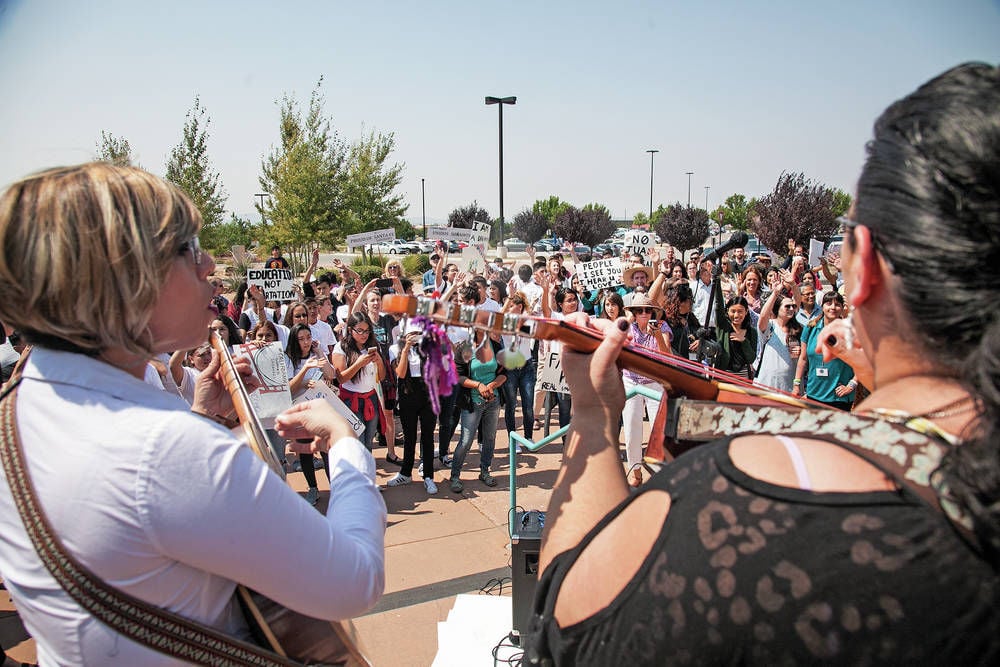 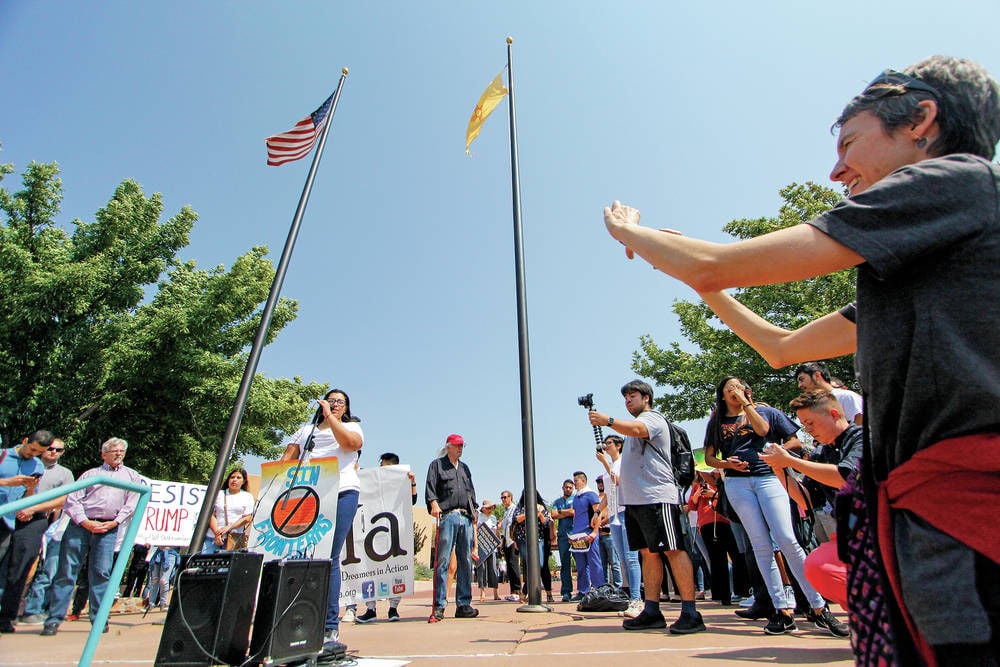 A student who identified herself only as Dulce speaks during Tuesday’s march at Santa Fe Community College. Gabriela Campos/The New Mexican 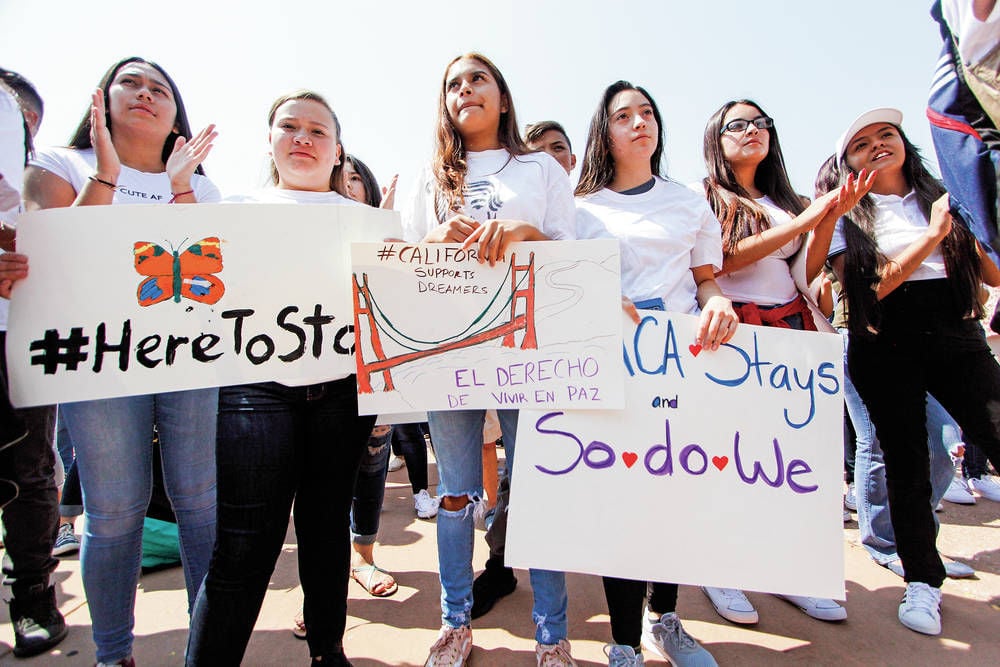 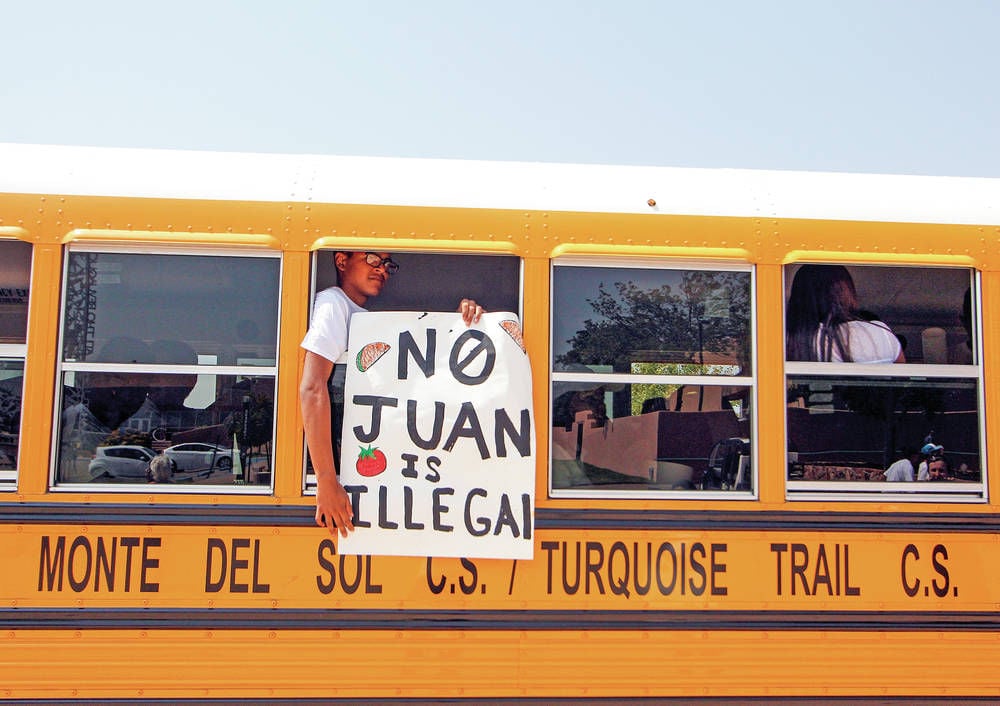 A student from Monte del Sol holds a sign out of the window of a school bus on the Santa Fe Community College campus Tuesday. Gabriela Campos/The New Mexican 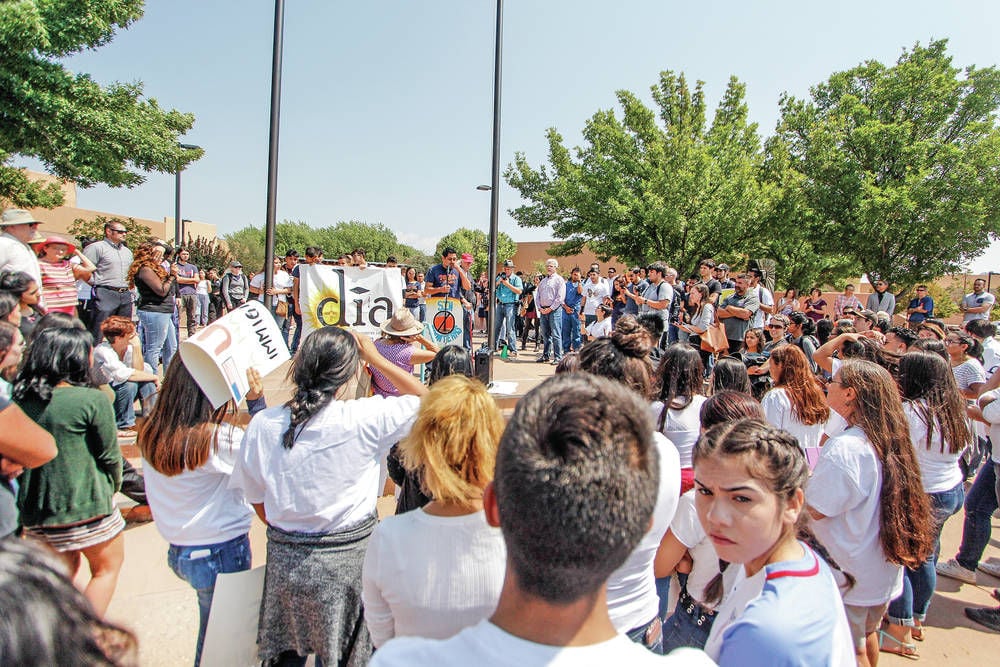 A student who identified herself only as Dulce speaks during Tuesday’s march at Santa Fe Community College. Gabriela Campos/The New Mexican

A student from Monte del Sol holds a sign out of the window of a school bus on the Santa Fe Community College campus Tuesday. Gabriela Campos/The New Mexican

Several hundred people, many of them high school and college students, rallied Tuesday in Santa Fe to send a message to President Donald Trump on behalf of young immigrants who now might be deported.

The Dreamers, they said, are here to stay. But exactly how they will make their words come true was anybody’s guess.

Trump’s Department of Homeland Security is giving Congress six months to work out the details of unraveling the Deferred Action for Childhood Arrivals program, a move that could force out some 800,000 Dreamers, as those who were brought illegally into the country as children and have benefited from the program are known. In New Mexico, an end to the program could affect 6,800 young people.

Many at the rally said the Trump administration’s decision was inhumane and that they intend to challenge its decision.

“We’re not going to be quiet,” said 21-year-old community college student Citlaly Fernández, one of the organizers of the demonstration. “We are not going to be invisible. We are going to speak up, be heard and support each other.”

The six-month stay, she said, “means there is time to make a difference.”

Her 26-year-old sister, Dianna Fernández, is one of those who’s been protected under Obama’s program. A 2015 graduate of the community college, she said Trump’s stand filled her with fear and sadness.

“This could impact us in a negative way, economically [and] our education as well,” she said.

Her permit under the Deferred Action for Childhood Arrivals program was to expire in 2019, but Trump’s move could subject her to deportation much sooner. She struggled to find words of hope.

“With the revocation of DACA, nationwide tens of thousands of children and youth and 6,800 in New Mexico are at risk of being ripped from the only home they have ever known. That just isn’t right or fair,” said James Jimenez, executive director of New Mexico Voices for Children. “… America has never been the kind of nation where we punish children for the faults of the parents.”

U.S. Sen. Martin Heinrich, D-N.M., in a statement, called Trump’s decision “heartless and grave mistake. We should never be a country that kicks out some of our best and brightest students.”

But U.S. Rep. Steve Pearce, the state’s sole Republican in Congress, defended Trump’s decision as sensible in a statement.

“The truth is, the current DACA program is a short-term solution that does not achieve these goals,” Pearce said. “It is only a temporary fix for millions of young adults who have only ever known the United States as home.”

Many participants at the rally searched for words of encouragement to energize immigration activists.

“It’s disheartening that the [Trump] administration has taken this step, but it gives us momentum to pressure Congress to do something to change it,” said Udell Calzadillas, who works as an administrator at Monte del Sol Charter School.

He led some 70 students from Monte del Sol who took a bus to the rally. Students from Capital High School and The MASTERS Program, a college-preparatory charter school, also attended the rally.

One of the Capital students, senior Juliza Frías, said security guards at her school told her she would be punished for leaving at midday to attend the rally. She didn’t care.

“If you don’t stand for what you believe, your voice will never be heard,” she said.

She said she has lived in the United States since she was 3 years old. If she were deported, she said, her life would be turned upside down.

“We were born here. We were raised here. We’re strangers to Mexico,” she said of classmates who attended the rally with her.

Others at the event tied the Trump administration’s decision to recent racial unrest that began with a violent confrontation in Charlottesville, Va., in mid-August. A motorist plowed his car into a peaceful protest of a white nationalist rally, killing one person and injuring dozens more.

“This is a white supremacist way of thinking, that it’s their home and only theirs,” a student who identified herself only as Dulce told the crowd.

Allegra Love, a Santa Fe-based immigration lawyer for the Santa Fe Dreamers Project, said the nation as a whole must find a way to support the Dreamers.

“Dreaming is about people believing in themselves,” she said. “Now the country has to stand up and believe in them, too.”

In an interview with MSNBC, the NM Attorney General called the decision to end DACA "a public safety crisis" and a "black eye for this country."