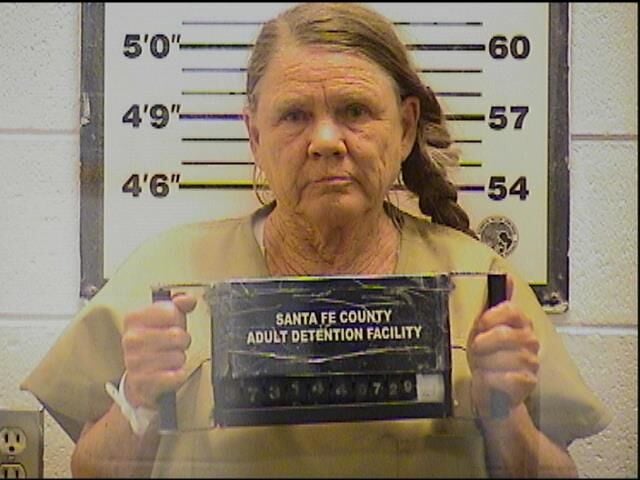 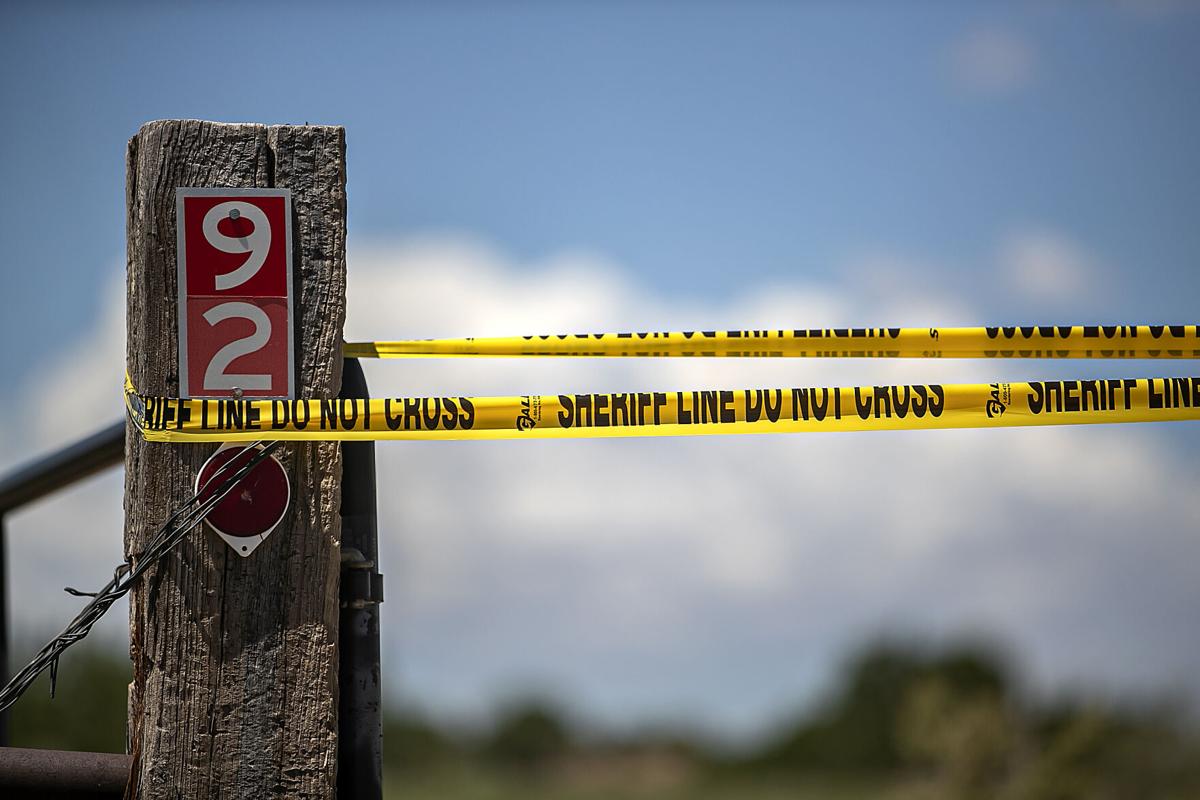 The Santa Fe County Sheriff’s Office is investigating a shooting that left a man dead and a woman wounded at a home on Haozous Road south of Santa Fe.

The Santa Fe County Sheriff’s Office is investigating a shooting that left a man dead and a woman wounded at a home on Haozous Road south of Santa Fe.

A night of heavy drinking may have led to a shooting early Wednesday morning in which a Santa Fe County woman is accused of killing her husband and wounding another woman at the couple’s home on Haozous Road.

Sheryl Graeb, 74, is charged with an open count of murder in the death of her husband, 75-year-old Kenneth Alvin Graeb, as well as aggravated assault and negligent use of a deadly weapon, according to a statement of probable cause filed in Santa Fe County Magistrate Court.

Stephanie Slone, 53, who was injured in the incident, said the violence erupted as she was preparing to go to bed for the night. After she undressed, she told sheriff’s deputies, Kenneth Graeb entered the room and began to “touch and ‘caress’ her.”

Shortly after, Slone heard a gunshot and Kenneth Graeb was slumped on top of her, the court document said. She escaped the home with a gunshot to the shoulder and ran to a neighbor’s home to call 911.

The call came in around 1:15 a.m., according to the sheriff’s office.

Deputies arrived at the Graebs’ home and found Kenneth Graeb’s body in the living room, with his right arm slung over the coffee table and a single gunshot wound to his back. A .38 revolver was sitting nearby on an entertainment stand.

Sheryl Graeb, who was still inside the home, refused to respond to deputies’ commands, and a SWAT team was called in around 2:30 a.m.

The standoff ended peacefully a few hours later, the sheriff’s office said. Sheryl Graeb was taken into custody and questioned by investigators.

However, she seemed to have little memory of the shooting.

Slone told deputies she had arrived at the couple’s home at 92 Haozous Road around 3:30 p.m. Tuesday. She and the Graebs had not seen each other for about two years because of the coronavirus pandemic, she said.

The Graebs already had started drinking by the time she arrived, Slone told investigators, and she joined them. Later, two other men came to the home, and the five of them consumed “multiple bottles of wine,” the charging document said.

After the two men left, Slone went to a bedroom and undressed, she told investigators, but she could not remember which one. She said she and the Graebs were the only people in the house.

When Kenneth Graeb came into the room and began touching her, Slone said, she asked him what he was doing, and where his wife was, and he called for Sheryl Graeb. Slone said she didn’t remember much of what came next, but she recalled the gunshot and Kenneth Graeb’s body falling on her.

She pushed him off and climbed out of a bathroom window, according to the charging document.

Before running to a neighbor’s home to call law enforcement, Slone ran back into the Graebs’ house to grab some clothes, the statement said. When she called 911, she told a dispatcher “Sherry” had shot her in the shoulder, and “Ken” was likely dead.

Slone was taken to the Presbyterian Santa Fe Medical Center and treated for the gunshot wound. She also had multiple bruises and abrasions on her arms and legs.

In an interview with investigators later, she said the Graebs had “20 to 50” guns in their home.

The statement of probable cause said Sheryl Graeb was “heavily intoxicated” as investigators attempted to interview her. She was given food and water “in an attempt to have a conscious conversation with her” about the shooting.

She became accusatory, according to the statement, asking the investigators if deputies “normally go to people’s houses and shoot them in their bed.” She also asked why they weren’t answering her questions about her husband — where he was and whether he OK.

She repeatedly told investigators she and her friends had been drinking.

“I didn’t eat,” she said, according to the statement. “I didn’t know they were coming over. Oh my God, we didn’t eat. I never got to cook.”

When Sheryl Graeb was told her husband had died, she responded with a “head nod,” the charging document said, and she asked for an attorney.

Following the interview, she was arrested and booked into the Santa Fe County jail.

At the couple’s home, investigators found droplets of blood around the living room.

Blood also was found on the sheets of the bed in the master bedroom, with trails of blood leading into the living room and into the guest room, where a bathroom window was open and the screen had been removed, the statement said.

The 30-50 guns is just a guess since their guns were locked in a gun safe without the police knowing the combination.

Hopefully Ms. Sloane's story is just the beginning of an investigation and the Sheriff will have cordoned off the property and will do a thorough criminal investigation including the "two men" and neighbors and friends. Those of us who are friends of Ken and Sherry expect there will be much more to this story that may be very different. For one thing Ken was a collector of photography equipment and may have been a gun collector. Let us avoid pre judgement here and look for the investigation.

Sheri VS ...You do realize that 60% of gun deaths are suicides not homicides.

In places where exposure to guns is higher, more people die of suicide. The highest suicide rates are in states with the highest gun ownership. If every life is important, then you can’t ignore nearly 60% of the people who are dying.

If there wasn't a single gun in the house it would have been a frying pan up the side of the head. Humans are incredibly resourceful. Don't blame the gun. It's always the person wielding it... the other who inspired the altercation... and the booze that lubricated the whole scenario.

Simply compare the number of deaths from gunshots to all other weapons added up together. The numbers are not even close. Alcohol, sex & guns is a deadly combination.

Add frying pans... and knives... and strangulation to the combination. Everyone knows that shoes harbor explosives that can bring down airplanes. Everyone must remove their shoes before entering the airplane. People act out, whether in a spontaneous toxic fog or a carefully premeditated game plan. And they use whatever device, even their own hands, to execute the deed. Hey... let's outlaw alcohol!! Oh wait, we already did that.

"If there wasn't a single gun in the house it would have been a frying pan up the side of the head."

And if it were a fying pan upside the head the victim would still be alive so, yes I blame the gun. Guns enable the user to kill swiftly and easily. Frying pans can do some damage, but it takes a lot longer and much more effort to kill someone with a frying pan.

I don't know these people and have no idea who is guilty, but without guns the Mr. Graeb would very likely still be alive.

And they weren’t hunters either. Just a morbid fascination with guns.

They were often seen at the roundhouse protesting the possibility of gun sense laws in the state. Also, sponsored fundraisers for the NRA

Seems like they could have made a more accurate count.

Sounds complicated but the bottom line is, before you open the bottle, secure the gun safe.