A man protests the deaths of Carmela DeVargas and Rex Corcoran Jr. — two inmates who died while in custody within a week of each other in November 2019. 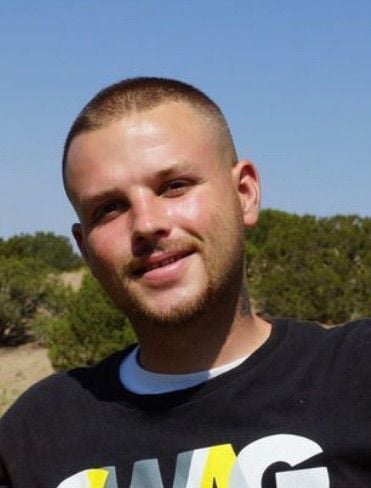 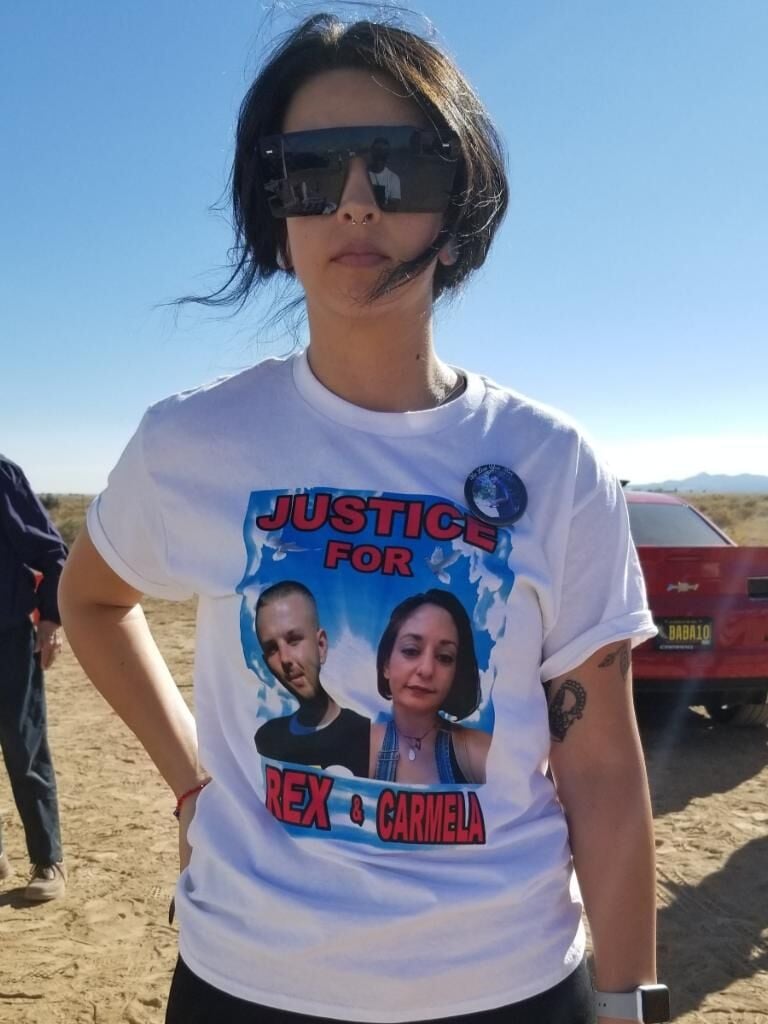 A woman protests the deaths of Carmela DeVargas and Rex Corcoran Jr. — two inmates who died while in custody within a week of each other in November 2019.

A man protests the deaths of Carmela DeVargas and Rex Corcoran Jr. — two inmates who died while in custody within a week of each other in November 2019.

A woman protests the deaths of Carmela DeVargas and Rex Corcoran Jr. — two inmates who died while in custody within a week of each other in November 2019.

Dozens marched outside the Santa Fe County jail earlier this month to commemorate the deaths of Carmela DeVargas and Rex Corcoran Jr. — two inmates who died while in custody within a week of each other in November 2019 — and to protest what they say is the abysmal quality of medical care the facility provides those struggling with substance use.

“We were trying to do a memorial to honor them, and we want to get word out to the community so they can understand what is going on,” Yvonne “Susie” Schmitt, Corcoran’s mother, said in a phone interview. “Because no one is listening to us and the deaths continue to happen.”

Lawyers for the families of Corcoran and DeVargas have filed wrongful death lawsuits against the Santa Fe County Commission, jail officials and staff members, contending the inmates were denied adequate medical care, including appropriate treatment for substance use disorders.

The rally and the lawsuits reflect a push to get Santa Fe County to modernize the care it provides for drug-addicted inmates, who make up a significant portion of the jail’s population, according to a March jail inspection report to commissioners.

Family members and attorneys say they want the jail to give Suboxone and methadone — medications that treat drug addiction — to inmates with opioid use disorder, adding they are increasingly frustrated by what they claim is the county’s unwillingness to do so.

“Given how many people have died as a result of inadequate medical care over the past 20 years, it appears there are some county commissioners who would rather spend money on lawyers and insurance than on improving care,” attorney Mark Donatelli, who represents the Corcoran family, wrote in an email. “This is a community jail, not a state prison, which is supposed to address the medical and mental health needs of the sons, daughters, brother and sisters who arrive there.”

The county has yet to respond in court to the lawsuit filed Nov. 5 by Corcoran’s mother.

Lawyers for the county filed a motion in DeVargas’ case, asking U.S. District Judge Robert C. Brack to dismiss most of the claims, based on governmental immunity.

Brack did dismiss many of the claims against individual county employees on those grounds, but he issued an order Oct. 19 in which he ruled DeVargas’ lawsuit contains sufficient evidence for some of her family’s claims against the county to move forward — including one that accused the county of violating her civil rights by failing to treat her opioid use disorder with Suboxone or a similar medication and allowing to the jail to remain in an unsanitary condition.

Both families say the inmates would not have died had they been allowed access to the medications they’d been taking before being jailed — Suboxone for DeVargas and methadone for Corcoran. Without those medications, they were forced to go through withdrawal.

DeVargas, 34, had been incarcerated for two months on a probation violation. She died from sepsis related to an infection of her spinal cord and brain stem.

According to her family’s lawsuit, her infection went untreated until it was irreversible, in part because jail officials were indifferent to her pleas for medical care because she was an addict.

Corcoran, also 34, was sent to jail for a week for having missed a compliance meeting related to a DWI conviction, his mother said Tuesday.

She saw him taken into custody on Nov. 5, 2019. The next time she saw him, a week later, he was in the intensive care unit on life-support.

Corcoran had been in the Santa Fe County jail before, according to his lawsuit, and the facility knew he was taking methadone to treat a substance use issue and suffered a previous instance of severe withdrawal.

But his methadone was not continued and no one monitored his condition for three days, according to the lawsuit.

On Nov. 9, when Corcoran was falling down in the shower and defecating on himself, he was taken to the medical unit for observation but wasn’t given any treatment despite his deteriorating state, the lawsuit says. Eighteen hours later, he was found having collapsed.

The next morning, admitted to the hospital for “altered mental status,” his lawsuit says, he was unable to follow commands, stand, or provide medical history or contact information for family members.

He was placed on life-support Nov. 11 and pronounced dead Nov. 13.

Donatelli’s office said Corcoran’s official cause of death was infective endocarditis, an infection of the inner lining of the heart muscle caused by bacteria or germs that enter though the bloodstream.

“He was not able to pick up a phone and ask for help,” his mother said. “If he was out here, he could have done that. In there, he couldn’t do that.”

Treatment with methadone or Suboxone — often referred to as MAT, short for Medication Assisted Treatment — has become the standard of care for substance use disorders in New Mexico and across the country, according to some experts.

The Metropolitan Detention Center in Albuquerque launched a program in September that provides buprenorphine [one of the main ingredients in Suboxone] to all inmates identified at intake as having an opioid use disorder.

Studies have shown the medication halves people’s risks of overdosing and doubles their chances of entering long-term recovery, according to a Nov. 8 National Public Radio report.

Hart said inmates may be prescribed naltrexone — a medication that helps an addict stay drug-free by blocking the effects of narcotics — once they’ve stopped using opioids and medications aimed at addressing the symptoms of withdrawal: nausea, diarrhea, muscle cramps and itching.

But only “certain inmates” — including those who are pregnant and those who have a current prescription for Suboxone and don’t test positive for other drugs that don’t mix well with the medication — are allowed to receive Suboxone, Hart said.

No one is allowed to receive methadone.

Dr. Eileen Barrett an associate professor of medicine at the University of New Mexico, said providing inmates Suboxone is safer, cheaper and more effective in helping people achieve long-term recovery than making them quit cold turkey and go through withdrawal.

But she said the treatment is often misunderstood, even by medical professionals.

“We often look at them as having moral failings and say, ‘If they just cared enough, they could get themselves through this,’ ” Barrett said. “It’s a judgment, and it’s not medically accurate. … It’s literally the same thing as saying, ‘Why don’t you just will yourself through cancer?’ ”

The Legislative Finance Committee’s Program Evaluation unit reported in August drug- and alcohol-related deaths in New Mexico reached all-time highs in 2020 and identified the criminal justice system as “one of the most glaring gaps in the treatment system.”

“Insufficient access to effective treatment in jails and prisons … help to perpetuate cycles of substance abuse and incarceration,” according to the report.

Of the county’s five commissioners, two — Anna Hamilton and Rudy Garcia — did not respond to requests for comment about the possibility of expanding medication-assisted treatment in the jail. Commissioner Anna Hansen, reached by phone on Veterans Day, told a reporter: “It’s a holiday and I just woke up. This has been litigated and litigated. Why don’t you ask the warden?”

Commissioners Hank Hughes and Henry Roybal said they would be open to considering changes to Santa Fe County’s policies regarding the use of medication-assisted treatment.

But movement on the issue may not come anytime soon.

“At this time, the County is not actively evaluating changes to its MAT program,” spokeswoman Hart wrote in an email.

After years working with folks who were struggling with addictions I realized that the drugs and alcohol were most often just a symptom and not the disease. Almost all of the addicts I worked with in the hospitals were suffering from all kinds of horrific emotional pain, and the drugs and alcohol were the only coping mechanism they had to alleviate some of that suffering. I think we need to realize that incarcerating these folks just makes them more hopeless and depressed, which I. Turn leads to more drugs and alcohol…I hope we can invest in some serious counseling services to help these addicts find their way out of this cycle.

These are human beings in the throes of addiction -- a disease with genetic pre-disposition. There is always some mysterious space for free will, but if you let them die they can't exercise it, for sure.

You make some good points. However, the SF Adult Detention Center is "accredited" by the NM Assn of Counties, not the ACA. The NMAC is essentially a scheme for detention centers to "accredit" each other, nominally to ACA standards. A bit too much like a "self licking ice cream cone". The accreditation avoids ACA accreditation, is much cheaper, and, the big benefit, they get a discount on their insurance rates. In other words, an insurance scam. Surprised??

This reaches past these two deaths. The SF County Commission voted to end oversight of the detention facility in 2015, in the wake of another death due to staff negligence. We need to ask the Commission why they walked away from the problem. Because it required them to actually get involved??

In fact there is NO effective oversight of SF Detention. Their "accreditation" is a sham, as anyone can see who bothers to look. But, why look??

The SF Grand Jury once had oversight of the local jails as part of their duty, but the Legislature ended that in the 1990s. We need to revive the Grand Jury, as today there is NO oversight.

Watch Dopesick, please, Commissioners. Educate yourselves about opioid addiction and withdrawal. Use your elected positions to take responsibility and act to prevent more preventable deaths of people whom the County actively denies necessary medical care. Blood is on your hands.

Every citizen of Santa Fe county should be appalled at the state of medical care in the jail that is being promulgated in our names. These cases are just two examples of a totally inhumane and incompetent 3rd world like system of care.

Yes, opioids change the brains chemistry, whether the user has a predisposition to drug abuse or not. There is no reason to allow an inmate to go through withdrawal alone in their cell without medical care. It is barbaric.