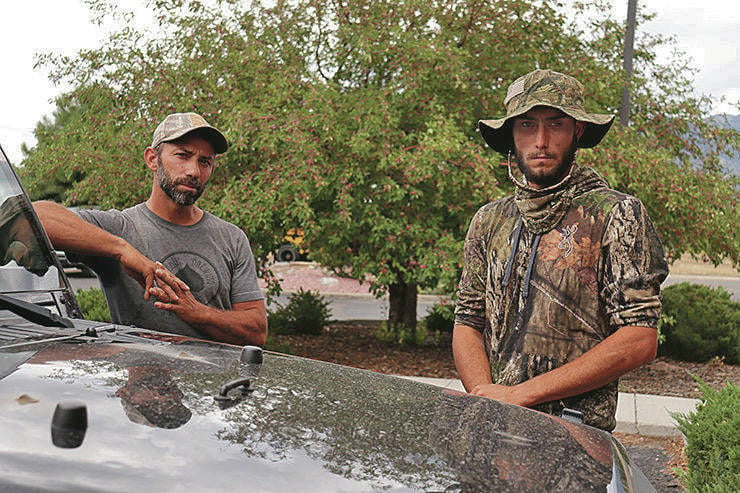 Josh Brinkley, left, and Daniel Lucero were out bow hunting for elk over Labor Day Weekend near Cerro de la Olla, also known as Pot Mountain, northwest of Taos when they had a strange encounter with a gigantic white structure that then disappeared. A day earlier, Brinkley saw what he thought were two hunters, but later described as oddly clothed ‘very tall figures with oversized heads.’ The two men are still trying to figure out what they saw. Jesse Moya/Taos News 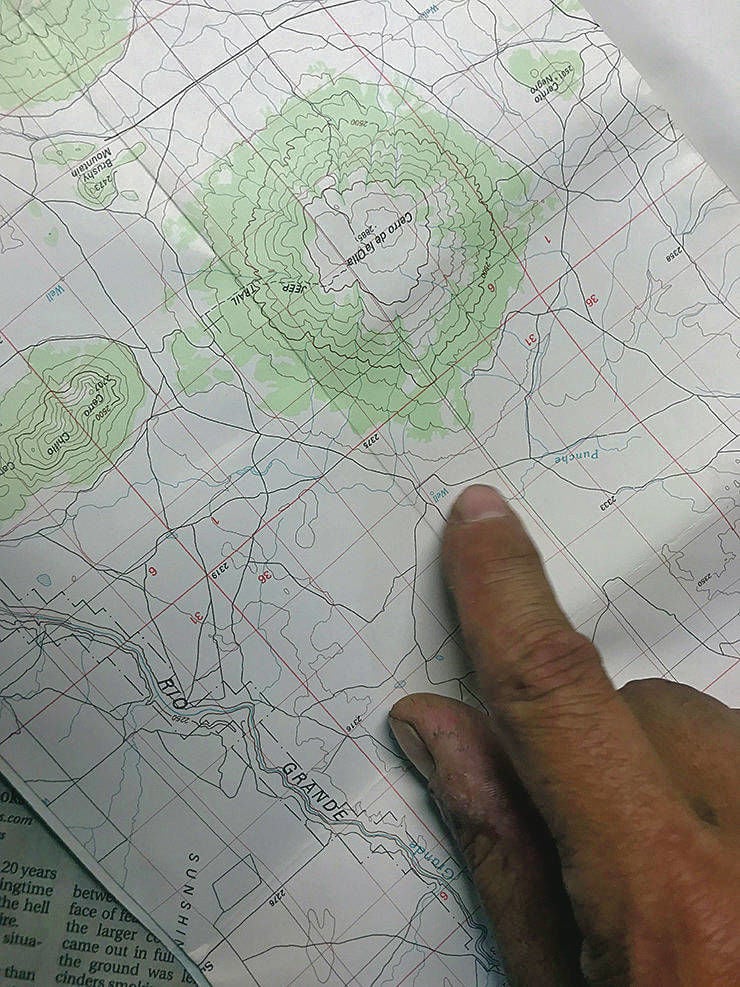 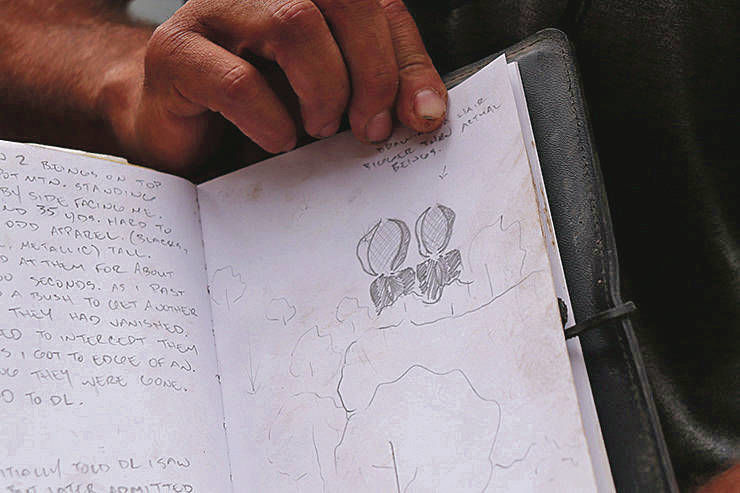 Josh Brinkley of Santa Fe shows the sketch he made of strange figures he spotted while bow hunting for elk Sept. 1 near Cerro de la Olla northwest of Taos. Jesse Moya/Taos News

Josh Brinkley, left, and Daniel Lucero were out bow hunting for elk over Labor Day Weekend near Cerro de la Olla, also known as Pot Mountain, northwest of Taos when they had a strange encounter with a gigantic white structure that then disappeared. A day earlier, Brinkley saw what he thought were two hunters, but later described as oddly clothed ‘very tall figures with oversized heads.’ The two men are still trying to figure out what they saw. Jesse Moya/Taos News

Josh Brinkley of Santa Fe shows the sketch he made of strange figures he spotted while bow hunting for elk Sept. 1 near Cerro de la Olla northwest of Taos. Jesse Moya/Taos News

TAOS — Josh Brinkley and Daniel Lucero went hunting for elk over the Labor Day weekend in rugged terrain northwest of Taos. They encountered, instead, something so strange they don’t know what to call it.

Still dressed in camouflage gear after several days in the wilderness near Cerro de la Olla, also known as Pot Mountain, the Santa Fe County bow hunters described a close encounter with what they said appeared to be otherworldly beings and a giant tent-like white structure that vanished in seconds.

“We’re a couple of guys that don’t believe in much,” said Brinkley, 41, of Cerrillos, who called himself a family guy who works in construction and on movie sets. “But we believe now.”

He’s been going to Pot Mountain area to hunt for 15 years, he said, and had never seen anything particularly odd before last week’s sightings.

Lucero, 26, said it was his first time hunting in the area.

Bow hunting season opened Sept. 1. The two men, longtime co-workers, had gone to Pot Mountain a couple of days early to scout for elk. On opening day, they set up along tree lines surrounding a field, each taking a different side, and waited. After three hours and no elk, Brinkley became restless. It was about 9:30 a.m.

“I take off walking, creeping around through the woods, looking for elk,” he said.

He reached the top of the mountain, where there’s a caldera — a wide bowl left behind by a collapsed volcano. As he walked to edge, he said, he saw two figures a short distance away. At first he thought they were fellow hunters.

But they were too tall, and their heads too big.

They were “standing side by side, staring right at me,” Brinkley said.

He walked toward them across the brushy field, a distance he estimated to be about 35 yards. As a bow hunter, he said, he’s adept at measuring distance because it’s critical to hitting a target.

“Figured I would talk to them,” Brinkley said. As he walked around a bush in his path, however, the figures disappeared.

“They were gone, just gone.”

He thought about what he had seen: Two tall figures concealed below the waist by brush.

“The shape that would be like their heads, it looked like they had huge hoods on,” he said. “It looked like two ribbons coming off either side to a point at the top and bottom. The right side was black, left side was white and a little shiny. Torsos were kind of black. I couldn’t see many details. It definitely looked like clothes. In the middle of the oval was just gray.”

In the meantime, Brinkley hurried down the mountain and back to the field, where Lucero was still waiting for an elk. He didn’t immediately tell his friend what he had seen. At first, he said he had spotted a couple of other hunters.

Back at camp, he finally told Lucero about the sighting. “I couldn’t take it anymore,” Brinkley said.

Lucero didn’t know what to believe.

On Labor Day, the pair headed out early in the morning to hunt again. They hiked all around the area. No elk. They gave up and returned to their Jeep around 2:30 p.m.

“We couldn’t figure out why there was no elk,” Brinkley said.

They decided to drive around the mountain to see if there were other hunters scaring off elk or people riding off-road vehicles. As they drove, the men said, they noticed there were no signs of wildlife at all.

After about 10 minutes of driving, they said, they saw a strange structure about a quarter-mile away that appeared to be a movie base camp — or a film set for an alien ship scene.

“It’s this big tent structure, like a circus tent — 50, 60 feet tall,” Brinkley said. “Coming off the left of it was this long building, almost like what you would build for an archery lane for target practice. It was a third the height, but really long, maybe a couple hundred feet.”

They drove down a hill and lost sight of the structure for about five seconds, Brinkley said. “When we topped the hill, it was gone. Just gone.”

They drove around the area until dark searching for the structure.

“I just know it was real,” Brinkley said. “It was huge and white and then gone.”

When the two men reached a place with cellphone service, they called a few friends and told them what they had seen. They thought about calling the Air Force.

One friend gave them a number for Peter Davenport, longtime executive director of the National UFO Reporting Center in Washington state.

Davenport confirmed the men had called him with their story. “It was a dramatic story,” he said. “If it is true, it is profoundly unsettling.”

Out of the thousands of calls he gets every year about possible alien sightings, Davenport said, the callers rarely describe seeing alien beings on the ground.

Brinkley and Lucero aren’t the first hunters to report a sighting they can’t explain. Four hunters in Challis, Idaho, in 2000 described a large triangular craft they said had hovered a couple of hundred feet above them before moving off over some mountains.

After listening to some 350,000 phone calls over 25 years, Davenport said, he thinks he can tell which ones are credible.

The Pot Mountain story was one of them, he said.

Brinkley and Lucero said they weren’t drinking and weren’t using drugs during their strange encounter. They aren’t the kind of guys who fabricate such stories. Still, they know their tale will be met with doubt, they said.

He didn’t believe in UFOs before last week, adding, “I sure do now.”

Lucero said he still isn’t sure about UFOs and aliens. “I just know I’ve never seen anything that big just disappear.”