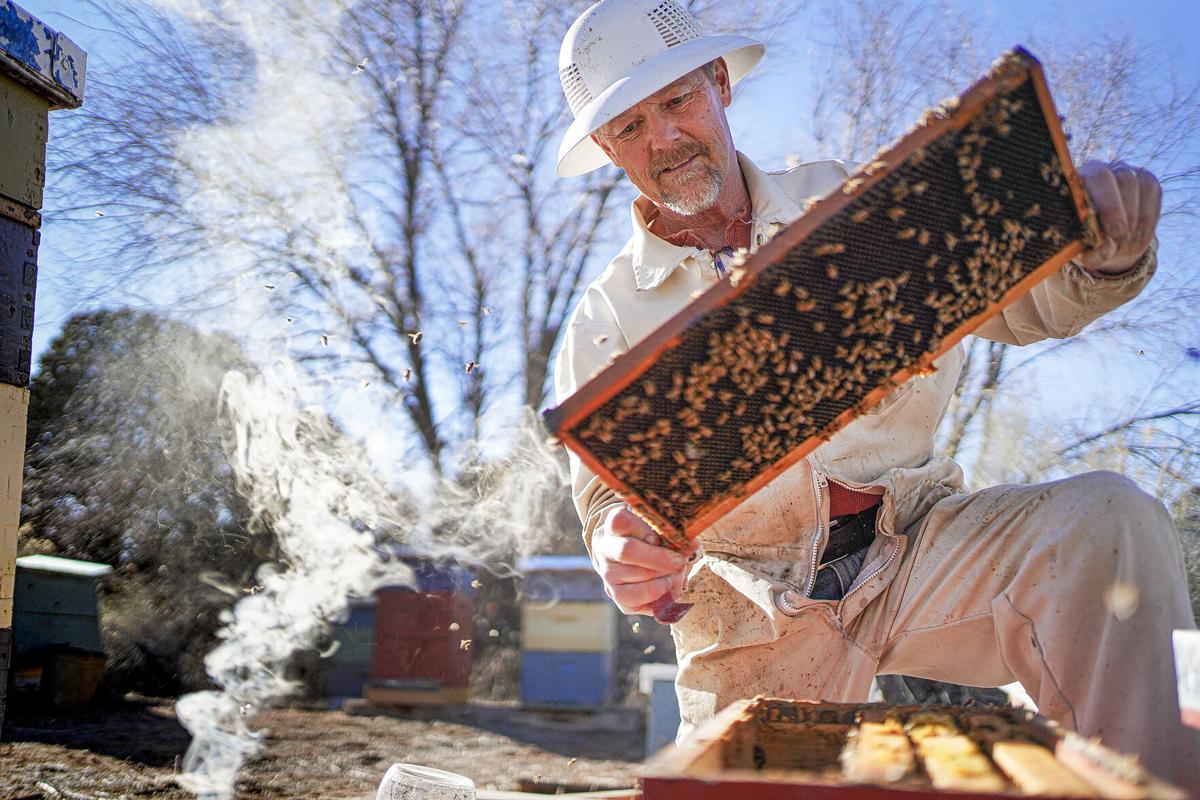 Steve Wall, owner of Buckin’ Bee Honey and Candles in Santa Fe, pulls out a frame from his nucleus hives, alongside the dozen production hives on his property, to examine his Carniolan honeybees Wednesday afternoon. Wall manages about 100 bee colonies and sells his products at the farmers market. 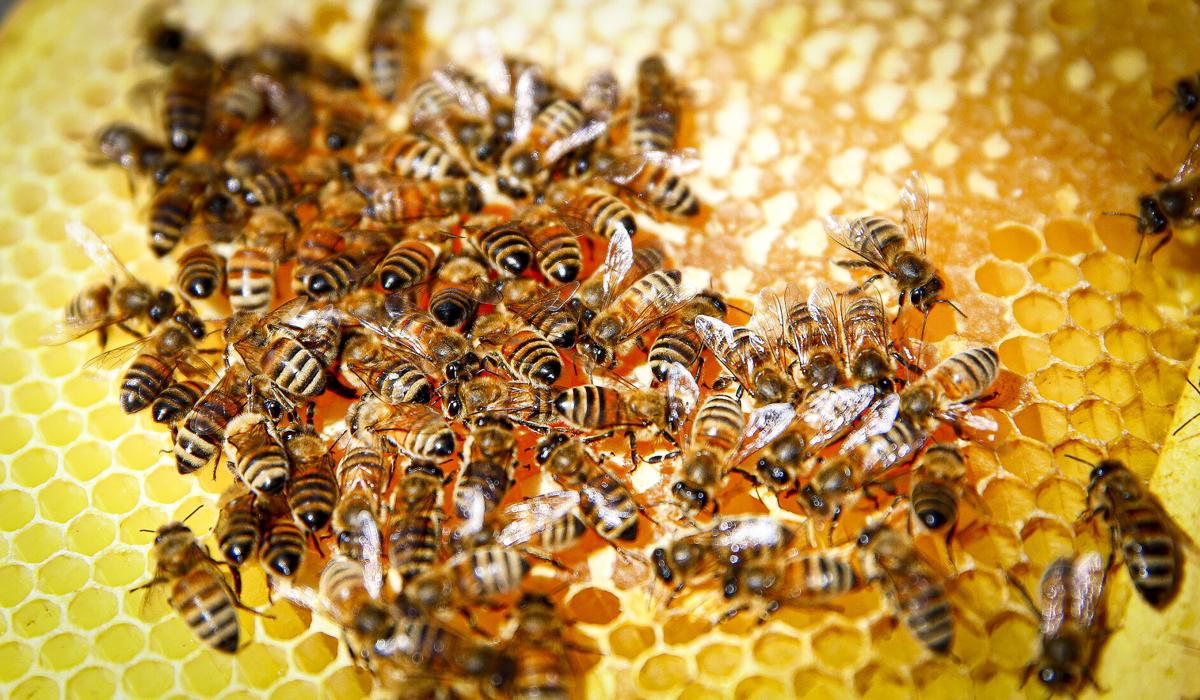 Carniolan honeybees from one of Steve Wall’s production hives at his home Wednesday afternoon. 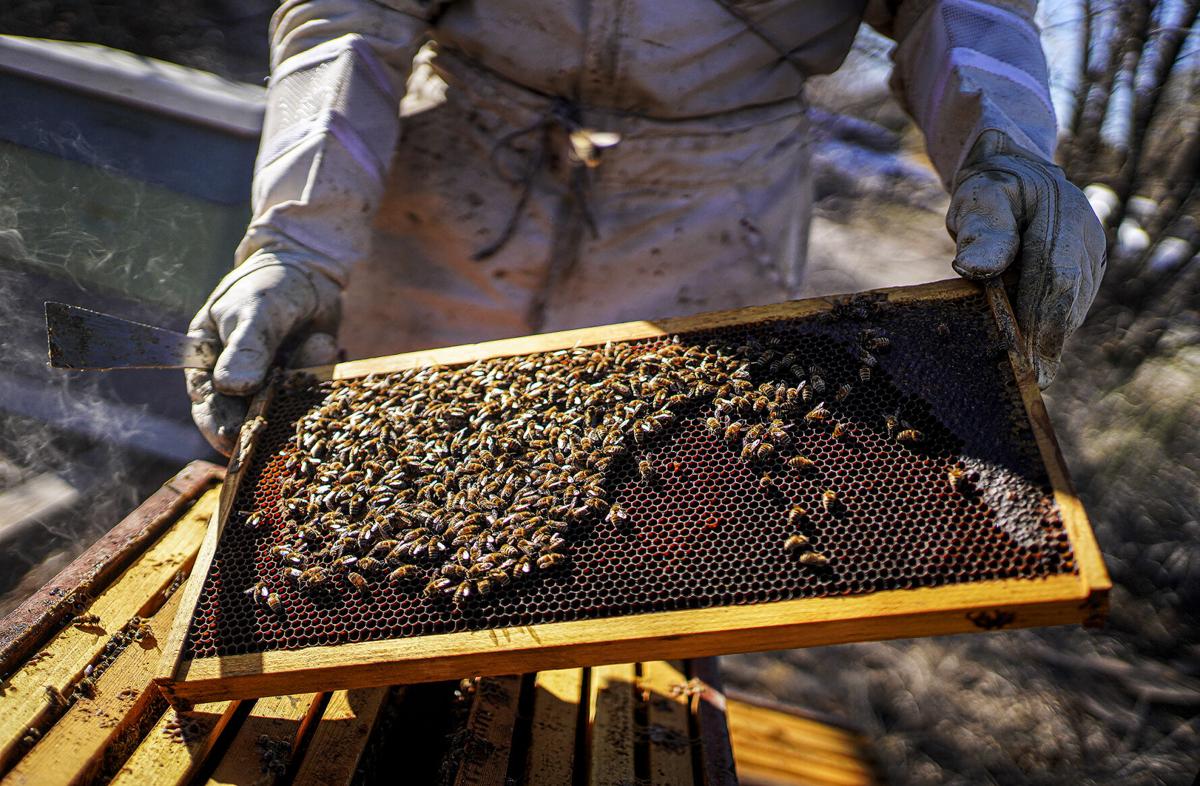 Steve Wall, owner of Buckin’ Bee Honey and Candles in Santa Fe, pulls out a frame from one of his production hives on his property to examine his Carniolan honeybees Wednesday afternoon.

There is a loud buzz humming out of Santa Fe City Hall about the value of bees and other important pollinators.

The Quality of Life Committee endorsed a plan Wednesday to accept a resolution designating the city as a Bee City USA affiliate, which if approved by the full City Council would codify the city’s devotion to promoting healthy habitats for bees, butterflies, beetles and other pollinators.

A number of community organizations reached out to the Santa Fe Water Conservation Office, which would oversee the affiliation, to discuss whether they could get the city designated as a Bee City USA affiliate and that effort snowballed, said Christine Chavez, the city’s water conservation manager.

“Bee City alone, that is not what is most exciting,” Chavez said. “What is most exciting is that we have 22 external partners, and they all want to work with the city collaboratively to figure this out. With climate change, everything we plant we are going to have to have a meaningful discussion about.”

Bee City USA began in 2012 in Asheville, N.C., as a way to engage that city in the fight against pollinator habitat decline. Two years later, Talent, Ore., joined as the second Bee City affiliate. Now there are over 100 cities across the United States — including Albuquerque — that have pledged to promote bee population health.

After a city is designated a Bee City affiliate, it typically forms a committee to keep the city in line with the organization’s requirements. Among other benefits, the city gains access to resources to protect pollinator habitats.

Santa Fe is approaching it a little differently.

According to a draft resolution, the Santa Fe Water Conservation Office will be designated a sponsor and will coordinate with the city’s Bee City USA Committee of 22 local community partners, which will be run by the Randall Davey Audubon Center and Sanctuary on Upper Canyon Road.

“Our community partners are ready to move on this,” said City Councilor Carol Romero-Wirth, who is sponsoring the resolution. “We just have to get it through the council. We don’t want to wait. Spring is coming and we want to be ready to dive into this work.”

Constituents had reached out in the past to discuss preserving locations around the city that had the potential to host pollinator habitats, such as city medians or city land where bushes have grown, Romero-Wirth said.

“We used to just mow things over and over, but we realized the value that was there,” Romero-Wirth said. “A few constituents, they wanted to make sure we didn’t destroy them because of their qualities. So when this opportunity came about, it seemed like a great way to pursue something that is clearly valuable to the community.”

The committee will oversee hosting at least one educational event, planting session or habitat restoration a year, as well as installing at least one prominent street sign within city limits and maintaining an informational website.

And arguably the most important requirement is to create or expand a program to promote pollinator habitats on both public and private lands and to endorse nonchemical, pollinator-friendly pesticides.

Much discussion and attention has focused nationwide on the destruction of honeybee colonies by varroa mites, a parasite that afflicts honeybees.

According to the University of Arkansas Division of Agriculture, more than 100 food crops are primarily pollinated by honeybees, including certain forage for livestock.

While the nation and the agriculture industry have placed plenty of attention on the need to protect non-native honeybee populations, there has not been the same level of attention or research on how well the approximately 3,600 native bee populations are doing — approximately 1,500 of which can be found in New Mexico, said Steve Wall, owner of Buckin’ Bee Honey and Candles in Santa Fe.

“There is a lot of attention on bees, and there has been for the last 10 years,” said Wall, who manages about 100 bee colonies. “It’s been in the news, you see it everywhere, ‘Save the bees.’ There is a perception that honey is a healthy sugar substitute, good for allergies. There are all kinds of [things] for what honey is good for.

“People are really eager to support local beekeepers, which is great for me.”

While honeybees can be kept in large numbers by beekeepers, other pollinators like bumblebees or carpenter bees are far more solitary, making them harder to manage and returning far less in revenue on the keeper’s investment, Wall said.

But Black added that harmful insecticides have been a point of consternation for the organization. While honeybees might be in the spotlight, other pollinators, which are native to their region, play an important role in maintaining local flora and need more attention to keep thriving, he said.

According to the U.S. Forest Service, 80 percent of all food and plant products reproduce through animal-assisted pollination.

That includes butterflies, of which 19 percent currently face extinction, including the western monarch butterfly, which has seen a startling 99.4 percent reduction in population since the 1980s.

Chavez acknowledged the importance of honeybees for food production but noted that the program is more in line with overall pollinator conservation.

Chavez added that the committee’s goals will largely be in line with previously stated benchmarks, including its recently announced TreeSmart Santa Fe initiative, which seeks to improve the city’s tree canopy by encouraging the planting of more drought-resistant plants.

Chavez said the city can mold the two goals together to benefit the city and the pollinator environment.

“It’s all connected,” Chavez said. “It’s not just the bees. It’s the trees, outdoor water demand, making smart decisions and giving resources to our city residents on how they can carry that same mindset.”

Being a bee city would be great. And will the sale of harmful pesticides be banned from being sold within city limits?