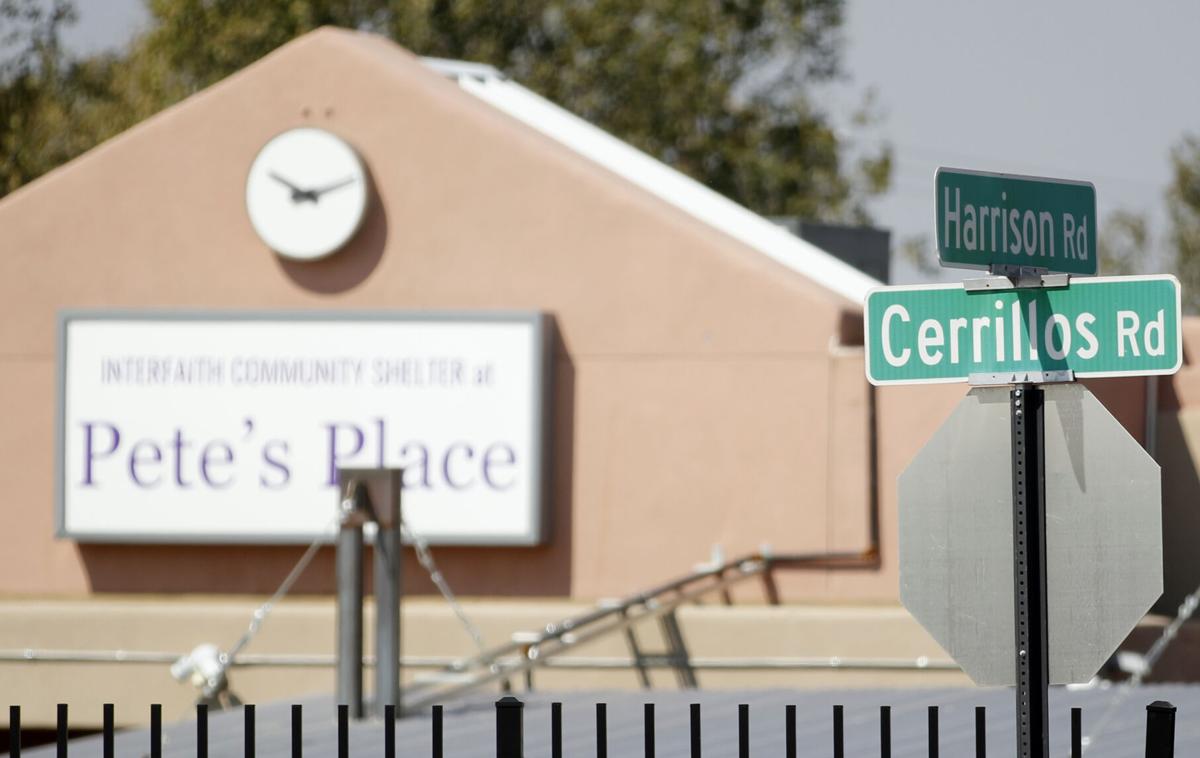 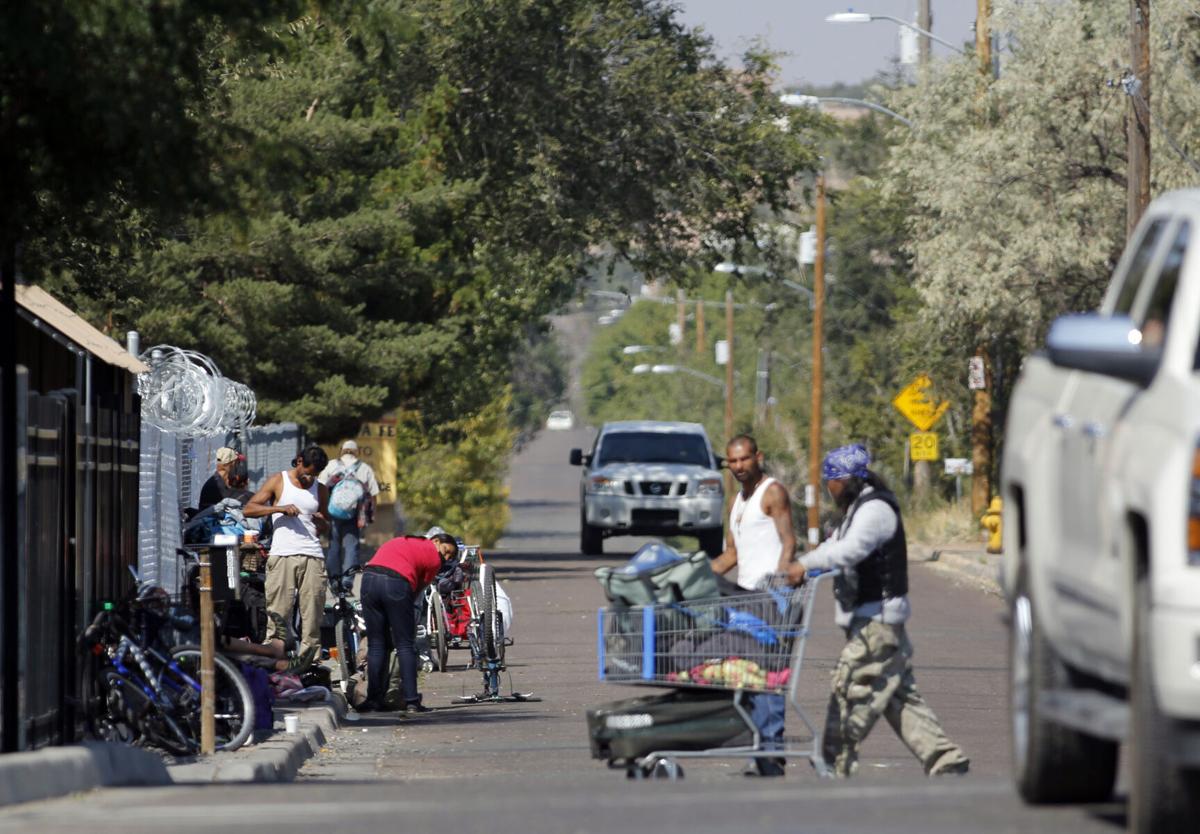 People gather this month outside the Interfaith Community Shelter at Pete’s Place. Santa Fe police Chief Andrew Padilla said during’s Wednesday’s meeting that his department will increase bike patrols in the area as part of a new initiative, Operation Tranquility.

People gather this month outside the Interfaith Community Shelter at Pete’s Place. Santa Fe police Chief Andrew Padilla said during’s Wednesday’s meeting that his department will increase bike patrols in the area as part of a new initiative, Operation Tranquility.

After hours of debate, the Santa Fe City Council unanimously approved a new four-year lease for the Interfaith Community Shelter at Pete’s Place, a homeless shelter where neighbors and business owners have complained of people trespassing, littering, loitering and stealing or dealing drugs.

Those tensions boiled to the surface Wednesday night when council members for close to two hours debated an amendment to cut the term of the shelter’s lease in half — to two years — and require the nonprofit that runs Pete’s Place to host and notify property owners within a half-mile radius of two annual meetings with community members.

Supporters, including Villarreal, argued it was necessary to protect residents at Pete’s Place, neighbors and nearby business owners who have complained.

Villarreal said she and other council members who supported her amendment are “committed to supporting people who are most vulnerable in our community,” but the additional hoops she wanted the nonprofit social welfare organization to jump through were necessary to make “sure the neighbors can also be the eyes and ears for the shelter if there are circumstances and situations happening.”

She added during debate with Councilor Carol Romero-Wirth that she didn’t see the proposed extra stipulations on the shelter as undue.

But opponents of the failed amendment argued that the extra requirements were in fact burdens, and a two-year lease agreement likely would have endangered funding for the nonprofit shelter and hurt its ability to find staff and volunteers working to offer a bed for people in a city that is reeling from homelessness.

“I think this would be destabilizing and potentially threatening for their survival,” Romero-Wirth said. “The issues that are impacting the neighborhood are really larger than Pete’s Place. They’re part of the larger problem of homelessness in our community and in our state.”

Romero-Wirth said that problem was exacerbated by a previous Republican governor, Susana Martinez, who “demolished” funding for behavioral health programs.

Daniel Yohalem, a board member of the nonprofit that runs the shelter, said he was not notified of the failed amendment before the meeting and stressed that the shelter has held numerous meetings with community members who have complained of people congregating near the shelter.

“A lot of those end up being meetings where people vent. And I sit there and I take it, and I come back and try to get things done,” he said, adding that the city has in the past “promised to [take actions] but has not yet” done so.

“It’s another unfunded mandate,” he said.

Santa Fe police Chief Andrew Padilla added during the meeting that the department will increase bike patrols in the area as part of a new initiative, Operation Tranquility.

He said the operation will begin Saturday and continue through Jan. 9 to disperse people who have been banned from the shelter and others who are lingering around nearby businesses. As part of the operation, he said, they could also organize days with the community to pick up trash in the area that neighbors have complained about.

The council also voted Wednesday to approve a liquor license for Jean Cocteau Cinema, to request the city manager appropriate $1.6 million in CARES Act funding to offer economic relief to people struggling to pay rent, and to authorize the city manager to sign a $225,000 contract with the Salvation Army to offer more beds for homeless residents of the city.

Kyra Ochoa, director of the city Community Services Department, said the funding is a good start in helping people avoid eviction because of back pay owed to landlords during the pandemic.

But she said the average amount of rent owed to landlords since the start of the pandemic is $18,000 and added that the funding is nowhere near enough to cover that.

10 years and the city awards this place another lease. 10 years and the city still has no plan. Just here's the lease? 10 years and the bar is set this low. Besides it needing to be moved to a more logical location, maybe the facility needs a serious AUDIT before the city even considers handing over leases. Where is the funding really going. How much is really being paid in rent to the city? After all it was stated in the meeting last week that Daniel Johalam meets with the neighborhood. He's kinda non existent like Pete,and the same goes with Sydney Lindell. Thank you Renee for bringing up the concerns and making them heard. This facility still needs to move. 4 more years of Pete's public nuisance!! Thank you Fanta Sé!!

Setting up meetings is just setting up meetings. There need to be constant and open lines of communication between residents, the shelter board and management, the city, and the PD as well as police or other official presence to remind all that there are rules to live by even in tough situations. I'm relieved that this has been settled and a lease signed. Now, lets get on with making it all work better.

Don't forget the death threat in the list of harms to the neighbors.

now the city needs to go and help make improvements to the building and take a way that compound look.

This is a comparative observation but let's take a huge city like Sheng hai for example. Today, they have no Covid and half the population now feels comfortable going out without a mask. They learned a lot from SARS and how to "clean up" if you will. This is what a "WE" consciousness can produce for everyone when confronted with a pandemic. Given they do live under an Authoritarian Government and had to comply with the stay at home orders for 2 month or so, this collective compliance did significantly stop the virus while other measures were applied. This is why we should not have the number of positive cases like we now have! Their businesses remained open but only for strategic deliveries. Their economy was somewhat functional, however, now the economy is almost full speed. With the ever non stop chaos, division tactics, constant misinformation and no leadership, this pandemic will most likely continue and more lives and livelihoods will be sacrificed. Please get out an vote. Our country's survival and functional capacity is depending on it. Vote practicality not ideology.