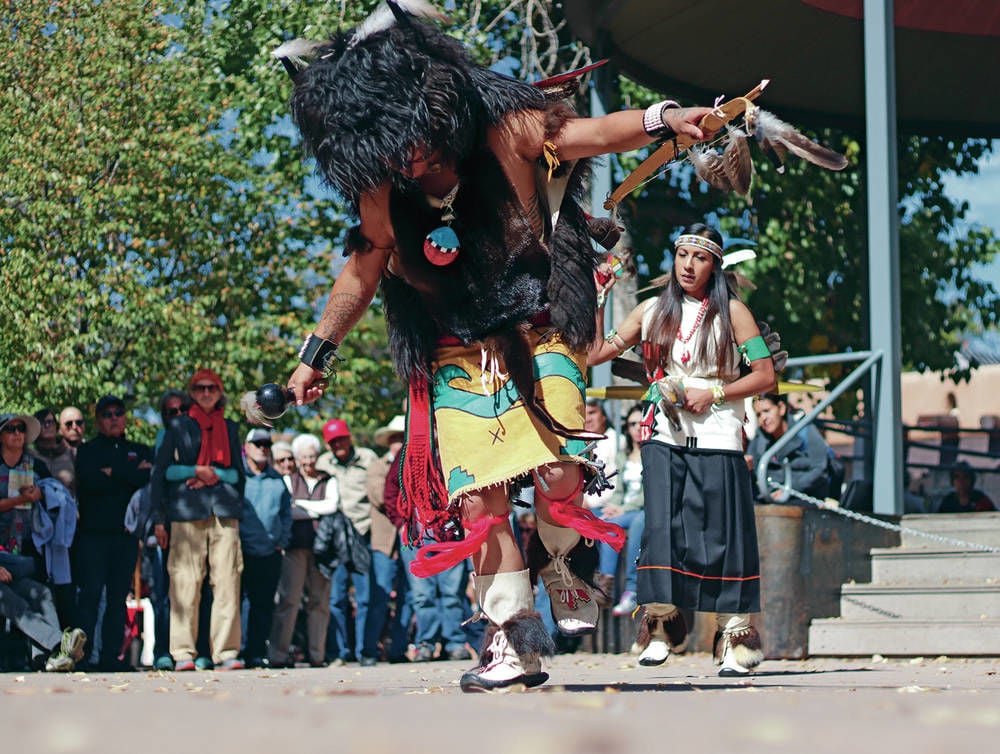 Troy Tefoya, 24, dances the Buffalo Dance with his sister Amanda Kedge, 29, on Saturday’s opening ceremony for Indigenous Peoples Day. The celebrations through the weekend culminate with Monday’s events on the Plaza. Danielle Prokop/The New Mexican 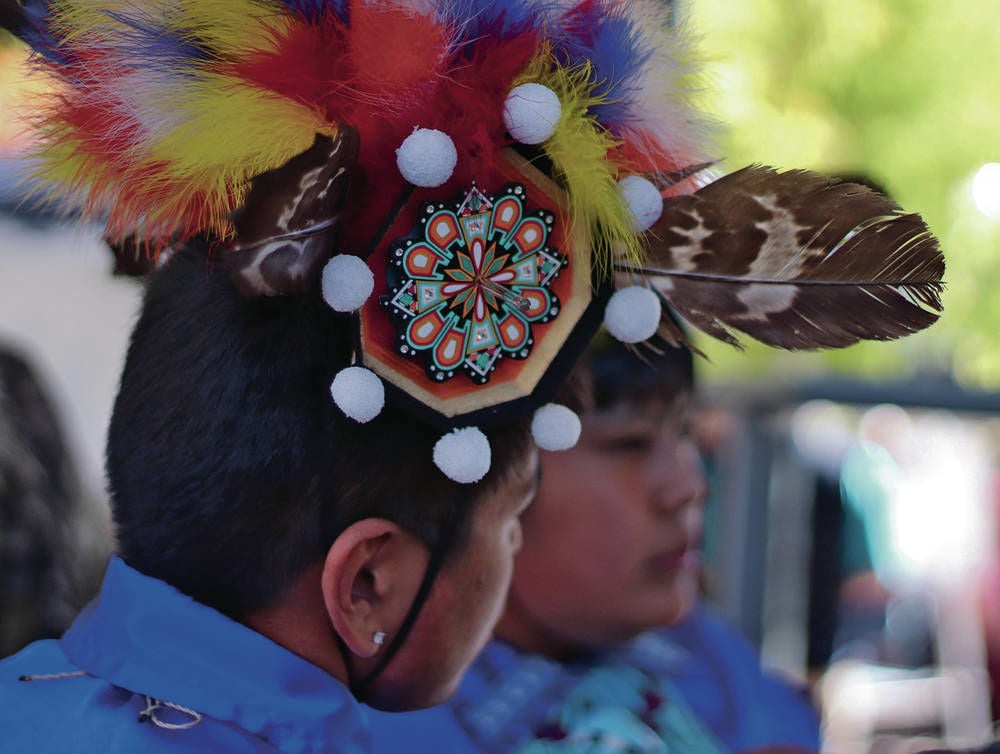 A Kallestewa Dancer from the Zuni tribe waits Saturday to be called up for the Corn Dance on the Plaza for Indigenous Peoples Day celebrations. Danielle Prokop/The New Mexican

Troy Tefoya, 24, dances the Buffalo Dance with his sister Amanda Kedge, 29, on Saturday’s opening ceremony for Indigenous Peoples Day. The celebrations through the weekend culminate with Monday’s events on the Plaza. Danielle Prokop/The New Mexican

A Kallestewa Dancer from the Zuni tribe waits Saturday to be called up for the Corn Dance on the Plaza for Indigenous Peoples Day celebrations. Danielle Prokop/The New Mexican

For many, Indigenous Peoples Day has been a long time coming.

For others, it still has a long way to go.

Santa Fe celebrates Monday’s holiday with a daylong celebration downtown that organizers believe will help cement its place both in people’s psyches and on calendars that once denoted “Columbus Day.”

But they also acknowledge that while New Mexico has been a leader in recognizing the contributions of Native people, the day is a reminder that work still needs to be done.

“One by one you hear of cities around the country changing Columbus Day to Indigenous Peoples Day,” said Caren Gala, director of the nonprofit Santa Fe Indian Center, which will have a booth on the downtown Plaza as part of the celebration. “And that’s a good thing, because people need to learn about our history as told by our people.”

She smiled at the thought that perhaps one day soon, no one in America will celebrate Columbus Day.

Indigenous Peoples Day was celebrated through the weekend and will culminate in an event Monday on the Plaza that will include a morning blessing and performances throughout the day.

Gala said attendance and participation in the Plaza festivities have grown since 2017, though she said organizers have not been taking count of the crowd size. More than 200 people were in attendance early Sunday afternoon as members of the Mountain Star Dance Group from Picuris Pueblo performed.

Kam Buhler, who is from Hong Kong and now lives in Wisconsin, said as a first-time visitor to Santa Fe, the celebration was “beautiful in showing off the culture; there’s so much to learn here.”

In April, New Mexico joined seven other states in changing Columbus Day to Indigenous Peoples Day. The Santa Fe City Council approved a resolution in 2016 to change the name and scope of the holiday.

That vote came just weeks after a public clash between Native and Spanish cultures during the Fiesta de Santa Fe, when raucous demonstrators disrupted a ceremonial reenactment of Spaniard Don Diego de Vargas’ reconquest of the city in 1692.

Christopher Columbus, who landed in the Americas in 1492, was credited with the “discovery” of the continent, despite the presence of Native people long before his arrival.

Emily Haozous, a volunteer with the Santa Fe Indian Center, said when she lived in Connecticut a few years ago, people protested the change from Columbus Day.

“I think people there were upset because they felt it was disrespectful to Italian Americans, and not appreciating that there’s room for everyone,” she said.

George Toya, 61, who designed the artwork for the official posters and T-shirts for the Indigenous Peoples Day celebration, said he’s excited to see more cities adopt the day in favor of Columbus Day.

“Even though it’s being recognized, the education system has to catch up,” Toya said. “The young kids are still being taught a false history.”

Toya, a member of Jemez Pueblo, attended Catholic boarding school in the early-1970s and said it was a mixed experience in which he learned self-sufficiency, but also was cut off from his family and culture.

In government-mandated and church programs starting in the 1860s, tens of thousands of Native children were “reeducated” to forsake their languages, or practice traditions and “assimilate” into American culture through boarding schools. One of the founders of the movement, Richard Henry Pratt, established Carlisle Indian School in Carlisle, Penn., and summed up his educational philosophy as: “Kill the Indian, save the man.”

The presence of Indigenous Peoples Day, some believe, will continue to help people understand both history and reality for Native people — even if those conversations are sometimes difficult.

Toya said avoiding the tough topics only adds to trauma, and America needs to face the history of mistreatment, racism and genocide of Native people.

“History shouldn’t be whitewashed because people don’t want to hear the real story,” he said.

When: The event starts with a 10 a.m. Monday blessing from Tesuque Pueblo Gov. Milton Herrera and opening remarks from former Gov. Mark Mitchell. Performances continue until 4:30 p.m. Booths will be open from 10 a.m. to 4 p.m.

This is all well and good, but this actually started in 2016 with the proclamation by former mayor Javier Gonzales. My family was involved in this very first event in 2016, so this is actually the FOURTH year that this has been happening, not three. WHY do people not want to acknowledge that this happened in 2016? As an American Indian, I am truly glad and thankful to Mayor Javier Gonzales for doing this, for starting this, IN 2016. Have a great Indigenous Peoples Day.

Because liberals live in a fake world, they have no choice but to celebrate a fake holiday. Heck, they are so fake and politically correct they can' even use the word Indian. They have to resort on picking an established holiday because they can't create a date for their fake holiday. Only they would care. Just like “Christmas” they must hijack a legitimate holiday like “Columbus” day and rename it to fit their fake narrative, and they use the fake news media to promote it. Today we celebrate Columbus Day”!

Columbus Day is a holiday that represents our Hispanic culture and should remain as such. Giving way to the “bleeding hearts” who want to change this serves no honorable or worthy purpose. It is well-documented history. If anything, the indigenous peoples should celebrate these white Europeans who intervened a much higher senseless genocidal era. Thousands upon thousands of innocents voraciously while still alive had their hearts ripped out with dull obsidian knives, and later were dinned upon by ruthless overlords — the Aztecs and Mayans. My seventh great-great-grandmother was murdered by Pope during the revolt of 1680. My great-great-grandfather Juan Ponce de Leon died at the hand of an indigenous arrow while exploring Florida in 1521. But in the end, both our cultures flourished and assimilated with each other. Christopher and Hernan did not invent world expansionism. Cann and Able did.