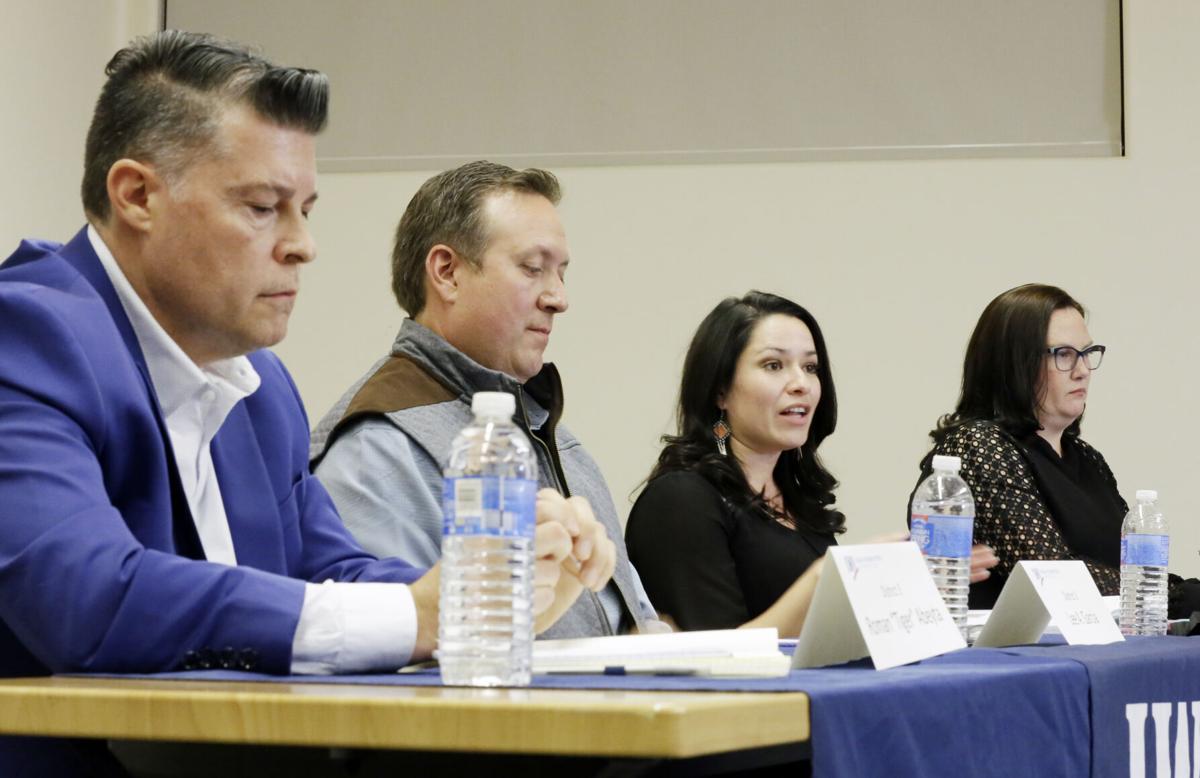 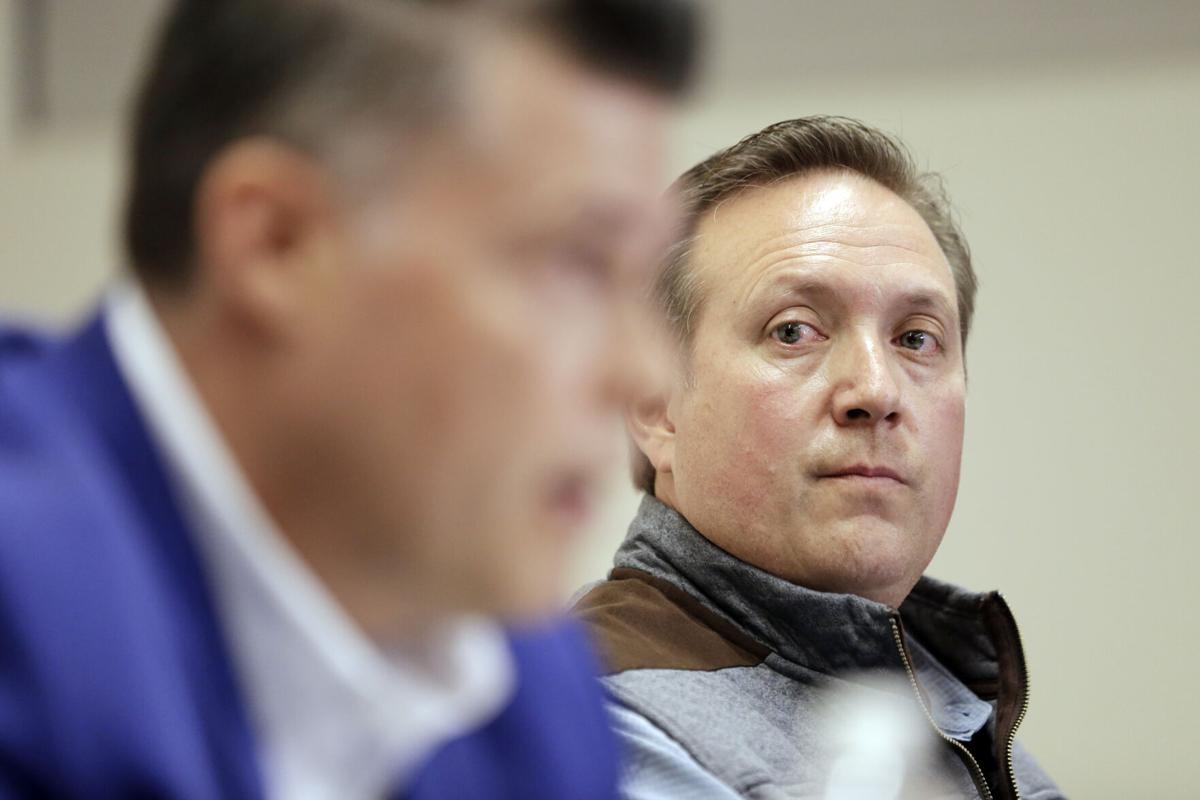 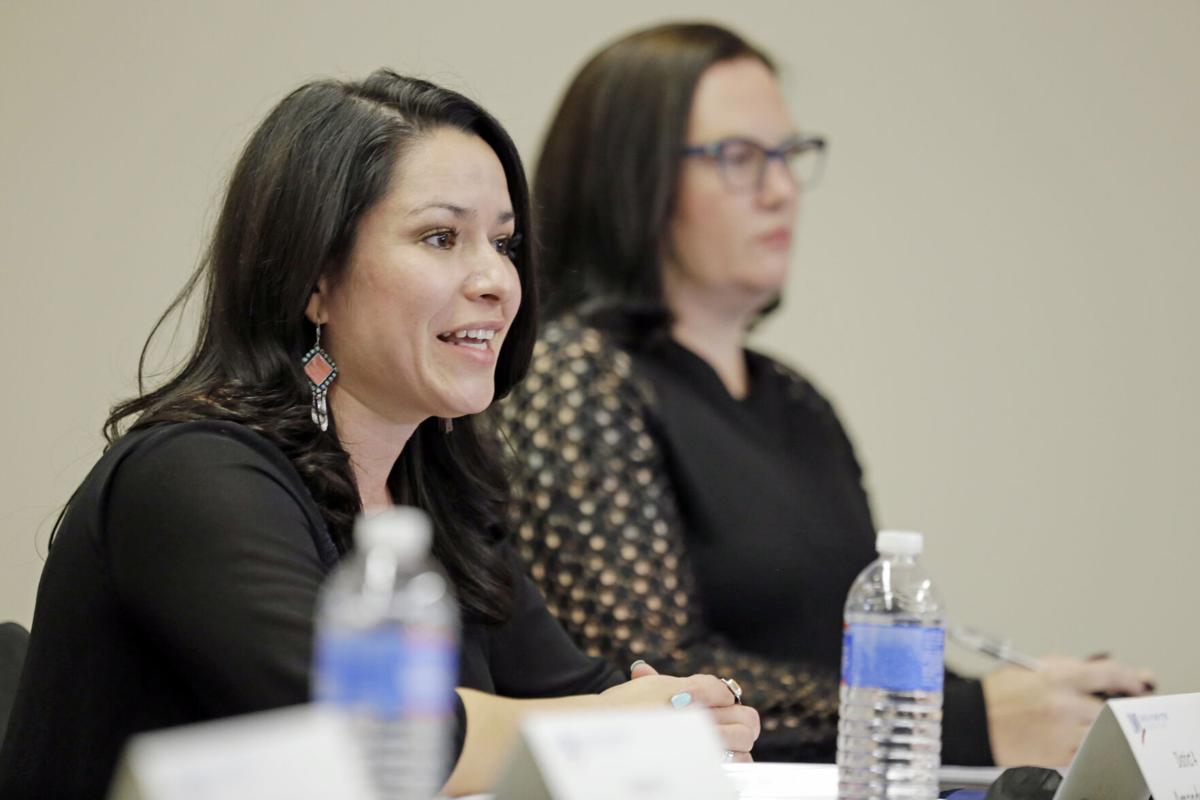 Amanda Chavez, left, and Rebecca Romero, candidates for City Council District 4, participate in a debate Tuesday hosted by the League of Women Voters at The New Mexican.

Amanda Chavez, left, and Rebecca Romero, candidates for City Council District 4, participate in a debate Tuesday hosted by the League of Women Voters at The New Mexican.

In one district, it's a sitting city leader vs. a longtime city businessman.

In another, it's a public educator vs. a financial analyst.

All four candidates are local. All vow collaboration. All agree that something has to be done to stem gun violence, help the homeless and bring the community together in the lengthy wake of the toppling of a historical city monument.

When a roughly 75-minute forum for these four candidates for the Santa Fe City Council — two in District 3 and two in District 4 — ended, it's fair to say no one tried to hit a political home run or deliver a knockout blow to a rival.

The Tuesday evening event was civil, respectful, even relaxed at times.

The League of Women Voters of Santa Fe County event, held in a conference room at The New Mexican and livestreamed on the newspaper's website, offered the candidates a chance to answer an array of questions ranging from city finances to water conservation to just how well the current council is doing its job.

District 3 incumbent Roman "Tiger" Abeyta, 48, who is nearing the end his initial four-year term, faces one challenger in Lee Garcia, 45, who has worked with his family business, Garcia Tires, for 22 years. The district covers much of the southern and southwestern parts of the city.

Meanwhile, two newcomers to politics — Rebecca Romero, 37, a management analyst for the state Department of Health, and Amanda Chavez, 36, the recently appointed director of special education for Santa Fe Public Schools — are vying to win the race for District 4, which encompasses the south-central portion of the city.

Helped, perhaps, by experience, Abeyta clearly conveyed the greatest confidence about the job and demonstrated an insider's knowledge of the duties councilors perform.

Asked by moderator Stephanie Schlanger to rate the job performance of the council, Abeyta said, "Overall, the mayor and the council do great." He added critics tend to forget city leaders were challenged by the pandemic but still managed to provide fire and police protection and got city permits moving.

Garcia and Romero both disagreed, saying more needs to be done. Romero said there is "no trust" in the governing body, noting she continually hears from her district's residents that no one at City Hall is answering their calls for help.

On other issues, there often was accord, with all the candidates saying they had to tackle the city's homeless problem on an almost person-by-person basis to find out why someone is homeless and what to do to help him or her find a home.

On the issue of youth-driven violence, Abeyta and Garcia spoke of providing more and alternative activities for kids to get involved in. Chavez and Romero pushed for stronger educational efforts, including in the schools, to reach kids and teens.

"Children need to be more informed and alert to gun safety," Chavez said.

Asked what they would do if someone gave the city $1 million to spend, candidates approached the answer in different ways.

Chavez said she would invest it in youth programs. Romero said she would prioritize the homeless problem, including supporting mental health programs. Garcia said he would invest it in economic and job force development. Abeyta said he would funnel it into an existing initiative providing single mothers with a monthly $400 stipend so they can afford to take community college classes to improve their lot.

All four highlighted their native New Mexico backgrounds and the need to provide more services for seniors, the disenfranchised and Spanish-speaking residents.

Garcia said he wants to bring strong financial management skills to the council to ensure the city is in financial shape to tackle the many problems it faces.

Both Chavez and Romero said they want to provide a voice for District 4 residents.

"I hear you when you're telling me no one is listening," Romero said. "I'm listening."

Chavez said listening isn't enough. "We also have to show them we will be asking [questions], and I want to do that for this district," she said.

Both of district 3 counselors are failing just as much as the mayor. Crime rate is up, roads in poor condition, mediums full of weeds and trash through major roads. Step up or get out of the race. The south side deserves the same attention as the north receives.

Abeyta can't claim Fire and Police continuing service when he had long been a outspoken critic of both. He's a major reason we can't recruit Officers and Firefighters to our city by continuously refusing adequate wages, attempting to cut benefits at every turn, and constantly criticizing the departments. Multiple news sources and studies have shown that our public servants need to be based off of property tax and not GRT but the rich Mayor and council refuse. He absolutely should be replaced immediately

District 4 needs a city councilor who can dedicate their time to the needs of the district as well as address the issues facing the city as a whole! If ether of these candidates has other priorities, they should not be running to represent my district! Either way, one of them will win and then we’ll see if they will call me back when I have a problem at city hall! And yes, we will be voting because like others in district 4, we take our city government seriously! Sometimes I think I should run for the council seat myself but it’s about the citizens of the district, not about me!

As one of the candidates of District 4 I want to reassure you I am taking this seriously. District 4 is my home away from home. I see all the issues and want to address them all. I am going to fight to make District 4 great again and not forgotten. These forums are based on largely the city issues. I want you to know I see District 4 and want things fixed now. I am just as frustrated as you. I would also like to speak to you in person if you like. You can email me at rromerosantafe4@gmail.com and we can talk about when to meet. There is also a free meet and greet at the FOP this Sunday October 10th from 12-2 I will be there if you would like to show up and talk more.