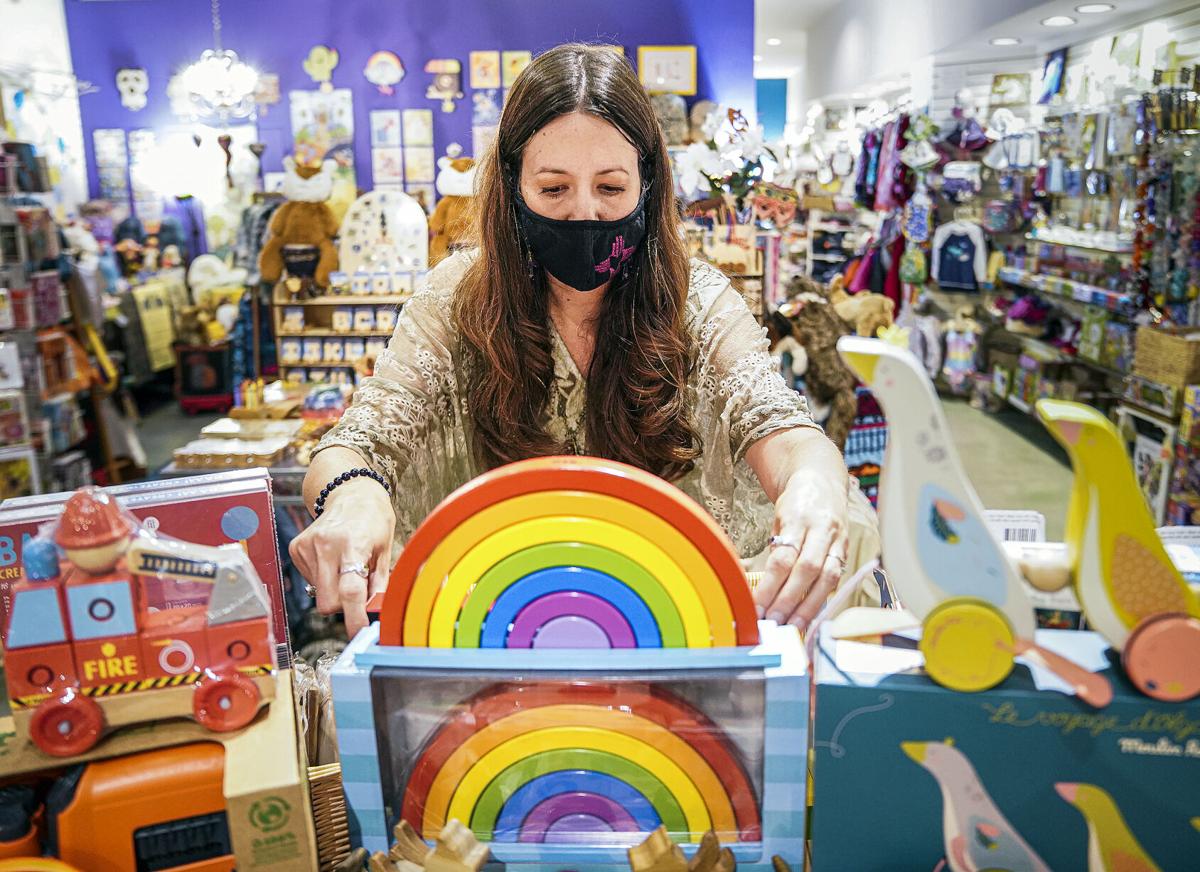 Katie Hyde, owner of Indigo Baby, straightens out the store displays following a rush at the shop on Friday afternoon. Hyde says she's paid her four employees at least $15 per hour since she bought the baby clothing and toys store in 2015. 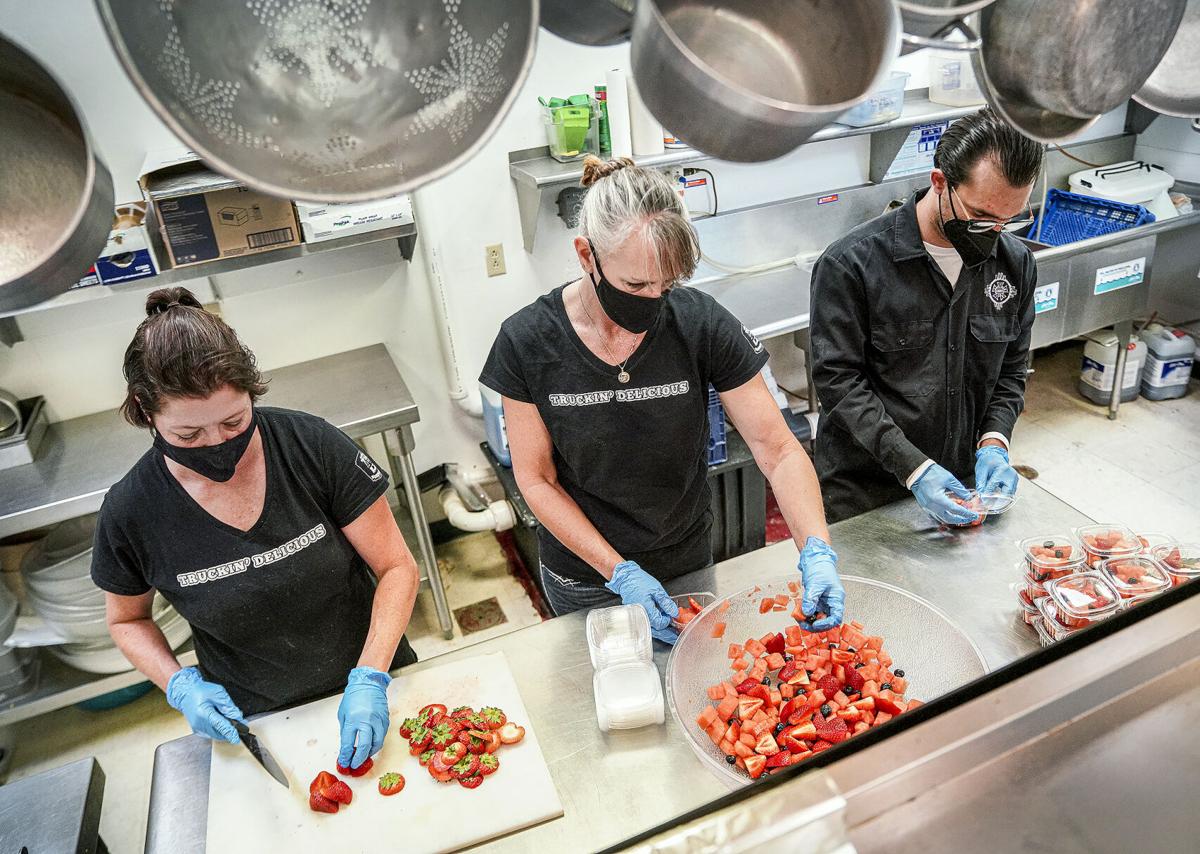 Victoria Bruneni, left, owner of What the Truck catering and food truck, and her employees Andrea McQuillan and Rick Longo, prepare fruit cups Thursday at their new kitchen at Stoney Camp and Recreation Center. Bruneni boosted staff minimum salaries to $15 an hour in the early months of the pandemic last year and this summer went to a minimum of $20 per hour. 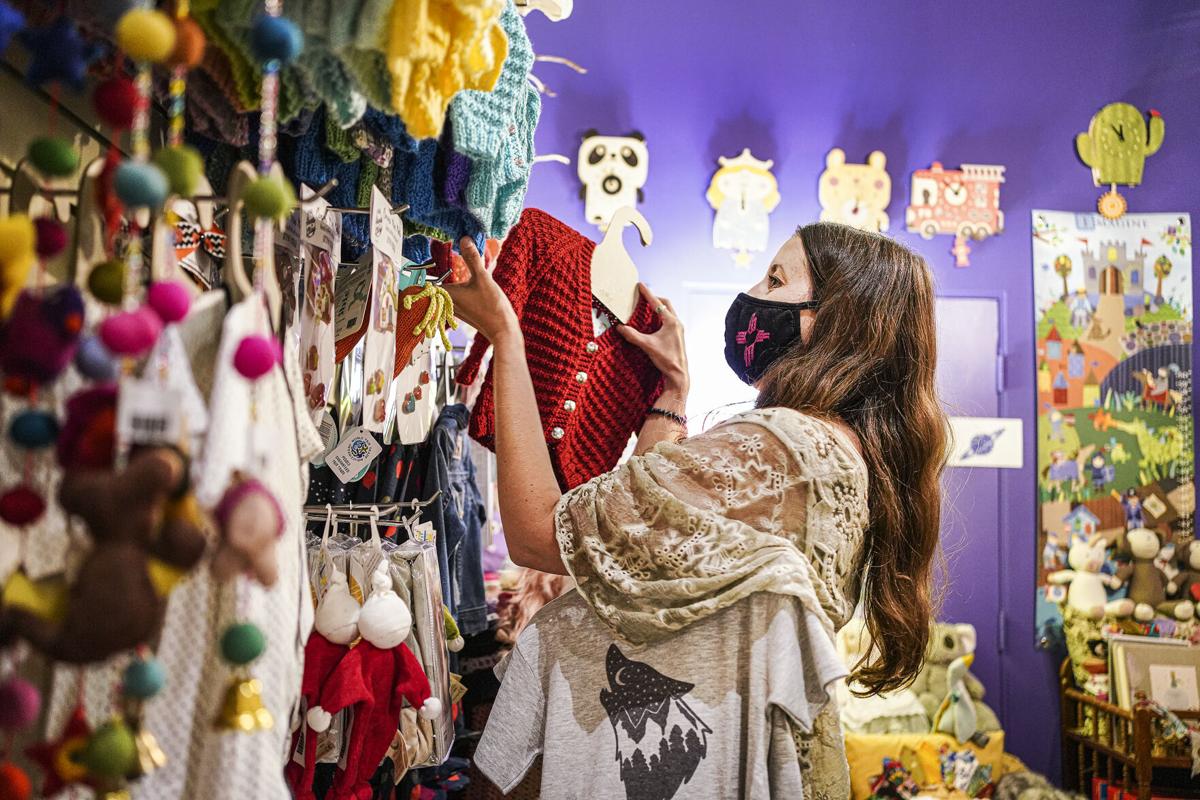 Katie Hyde, owner of Indigo Baby, helps a customer pick a sweater for a grandchild Friday afternoon at her shop.

Katie Hyde, owner of Indigo Baby, straightens out the store displays following a rush at the shop on Friday afternoon. Hyde says she's paid her four employees at least $15 per hour since she bought the baby clothing and toys store in 2015.

Victoria Bruneni, left, owner of What the Truck catering and food truck, and her employees Andrea McQuillan and Rick Longo, prepare fruit cups Thursday at their new kitchen at Stoney Camp and Recreation Center. Bruneni boosted staff minimum salaries to $15 an hour in the early months of the pandemic last year and this summer went to a minimum of $20 per hour.

Katie Hyde, owner of Indigo Baby, helps a customer pick a sweater for a grandchild Friday afternoon at her shop.

The private sector is taking the lead in getting Santa Fe used to the idea of a $15 minimum wage.

At least 40 Santa Fe businesses on their own are paying all their employees at least $15 per hour, exceeding the city’s minimum wage of $12.32 an hour.

“I just do it,” said Katie Hyde, who has paid her four employees at least $15 per hour since she bought the baby clothing and toys store Indigo Baby in 2015. “I know if I pay my employees well, they will show up on time. If you give them an incentive to be here, they show up.”

Higher wages pay for themselves, she said.

“They can sell more,” Hyde said. “They pay their own way.”

What the Truck food truck and catering company owner Victoria Bruneni boosted staff minimum salaries to $15 an hour in the early months of the pandemic last year and this summer took all five full-time and five part-time employees to at least $20 per hour.

“We have been tremendously successful,” said Bruneni, who started What the Truck in 2017. “We are fortunate to have events every day. We have been incredibly busy.”

Last year, Bruneni paid herself the lowest salary she pays and realized how little that amount was.

“Obviously, you want to build a team that is loyal and stays with you for a while,” she said.

The pandemic has prompted many workers to resist returning to work for inadequate pay, leading to worker shortages, especially in the restaurant industry, and a potential major strike in the movie and television industry. This has driven many employers to increase their minimum salaries irrespective of government minimums.

“There are two types of minimum wage,” said Suzan Reagan, senior program manager at the University of New Mexico’s Bureau of Business and Economic Research. “One is imposed by government. The second is what is actually being paid in the market. What is the commercial minimum wage and market minimum wage? It’s the salary employers have to offer because nobody will take the job for less.”

“The pandemic made it challenging to get the workforce,” Freedle said. “The challenge is even higher in the rural areas. Our philosophy is if you take care of your staff, they can take care of clients. We consider it an investment. It helps us reduce turnover. It improves overall morale and sense of value.”

Since the start of the pandemic, Santa María El Mirador, a nonprofit service provider for adults with intellectual disabilities, has raised its minimum salaries from $12 to $13.25 and, as of Sept. 6, all employees are paid at least $15 per hour, thanks to a nearly 7 percent increase in state reimbursements put in place in June, CEO Patsy Romero said.

The state of New Mexico and city of Santa Fe have shown no appetite for a statewide or citywide $15 minimum wage, even though the city in September did start exploring setting a $15 minimum wage for city government employees and the state may also increase state employee minimum salaries to $15.

The state minimum wage is $10.50 and will reach $12 per hour on Jan. 1, 2023, stemming from 2019 legislation negotiated between the Legislature and Gov. Michelle Lujan Grisham that raised the minimum wage in New Mexico for the first time since 2009.

“Crossing the finish line with that legislation required a great deal of collaboration and persistence,” Nora Meyers Sackett, the governor’s press secretary, wrote in an email. “As always, the governor’s office will review and evaluate legislative proposals for the session – I defer to the Legislature for additional information on such items (such as minimum wage increases beyond $12 per hour).”

The state Senate likely will not address a statewide $15 minimum wage in the upcoming 30-day legislative session.

“Reopening the 2019 [minimum wage] legislation is not directly on the radar at this moment,” said Senate Majority Leader Peter Wirth, D-Santa Fe. “I think that is a discussion that certainly needs to be on the table. It is something I individually support getting there (to $15 per hour).

“At this moment,” Wirth continued, “my priorities for the upcoming session is to get all our state employees to $15. Education employees should be included, for sure.”

At least 20 U.S. cities have a minimum wage of at least $15 per hour, though all but Seattle, Chicago, New York City and Washington, D.C., are in California. Santa Fe was the first city in the country, in 2004, to raise the local minimum wage above the state minimum and alternated with San Francisco to have the highest minimum wage until 2012.

But Santa Fe has never amended its 2003 minimum wage ordinance, which spelled out that starting in 2009 to increase the wage based on cost-of-living increases, which have not matched the much larger minimum wage increases in other cities.

Mayor Alan Webber recalled how conversations with many sectors of the community in 2003 led to the city’s and nation’s first livable wage ordinance, as the city refers to the minimum wage.

“I think it is time to rejoin that conversation,” Webber said. “This is something we need to get to work on, not something we should wait for. We need to form a task force or something.”

In the past, Webber was willing to wait for the state or nation to commit to $15 first.

“The nation is recognizing we need to raise the minimum wage,” Webber said. “It’s a question of what it takes for a family to be able to live in Santa Fe.”

In the past decade, $15 an hour has become a battle cry, starting with fast food workers in New York City in 2012 and more recently adopted by congressional Democrats and even President Joe Biden.

“In general, it’s great that people are starting to raise wages on their own volition, which is why we should move policy forward,” Rivera said. “At the same time, the cost of living is so high. This is just a first step.”

After a two-month trial period, all employees at The Finishing Touch are paid at least $15 per hour.

“If I don’t pay them well, they are going to go somewhere else,” Gaytan said. “We really try to keep the staff here as long as we can. It’s less training.”

We Do Windows, a window-cleaning company, has stayed in business since 2009, even after instituting a $15 minimum wage in 2011 and increasing to $18 per hour during the pandemic, owner Jim Attlesey said.

“This is a business model you have a choice of making,” said Attlesey, who has nine employees. ”I grew up in a union household. That gave us a good middle class living. It pays to have my employees stay so I don’t have to train people over and over. We charge the appropriate amount so our workers can have only one job.”

Following are among the Santa Fe business paying all employees at least $15 per hour:

What the Truck catering company and food truck, $20

We Do Windows Santa Fe

Yep - long overdue for a min wage hike. However with various consumer costs increasing over the past year, I've not turned into a good cook, but rather a Master Chef, I dare say. Good riddance for dining out any longer. Thank you youtube and the internet!!

Huh! Where are all the Republicans who said that a $15 minimum wage would bankrupt these businesses? Huh, weird. Not a peep out of them.

The US Economy is over 22 trillion dollars. At the core are businesses like these, finding a way to keep going! Bravo What The Truck! way to go Victoria!!

Love Indigo Baby and all the locally made products Katie sells!

Unique, one of a kind, awesome gifts :)

It's interesting that one of this year's winners for the Economics Nobel Prize was David Card, for his real-world experiments in showing that raising the minimum wage did not result in less hiring or more job losses. Seems to be that some businesses are also finding this out.

Mayor Webber, our Strong Mayor, needs a task force or something? Just lead the way and push the Council to $15/hr. I supervised a crew for the city under the Alan Admin and he does not value labor. I begged to move good workers up and it fell on deaf ears. The talk was there, but never action.

AFSCME would never let a hard worker move up on merit

It should be clear to anyone who has been a part of this blessed place that a higher state/local minimum wage is necessary for anyone to move forward with life in New Mexico/Santa Fe. Even $15 is a mere steppingstone.