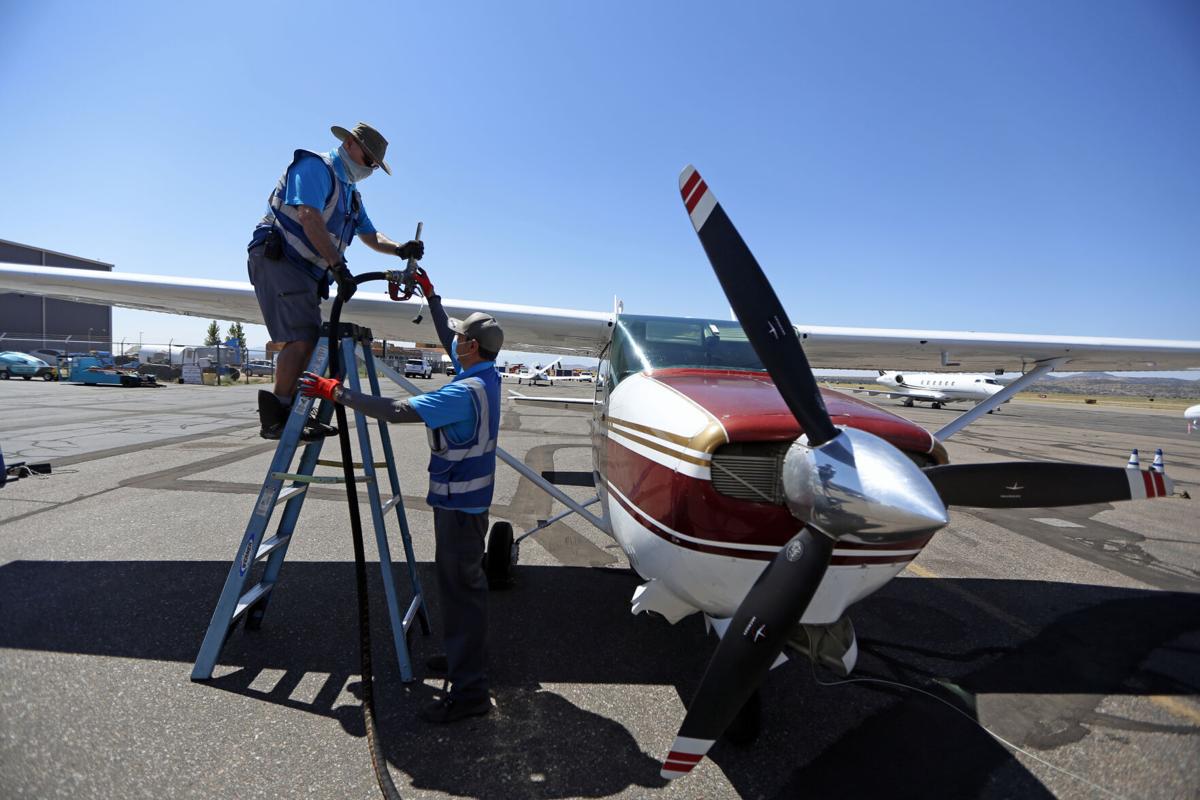 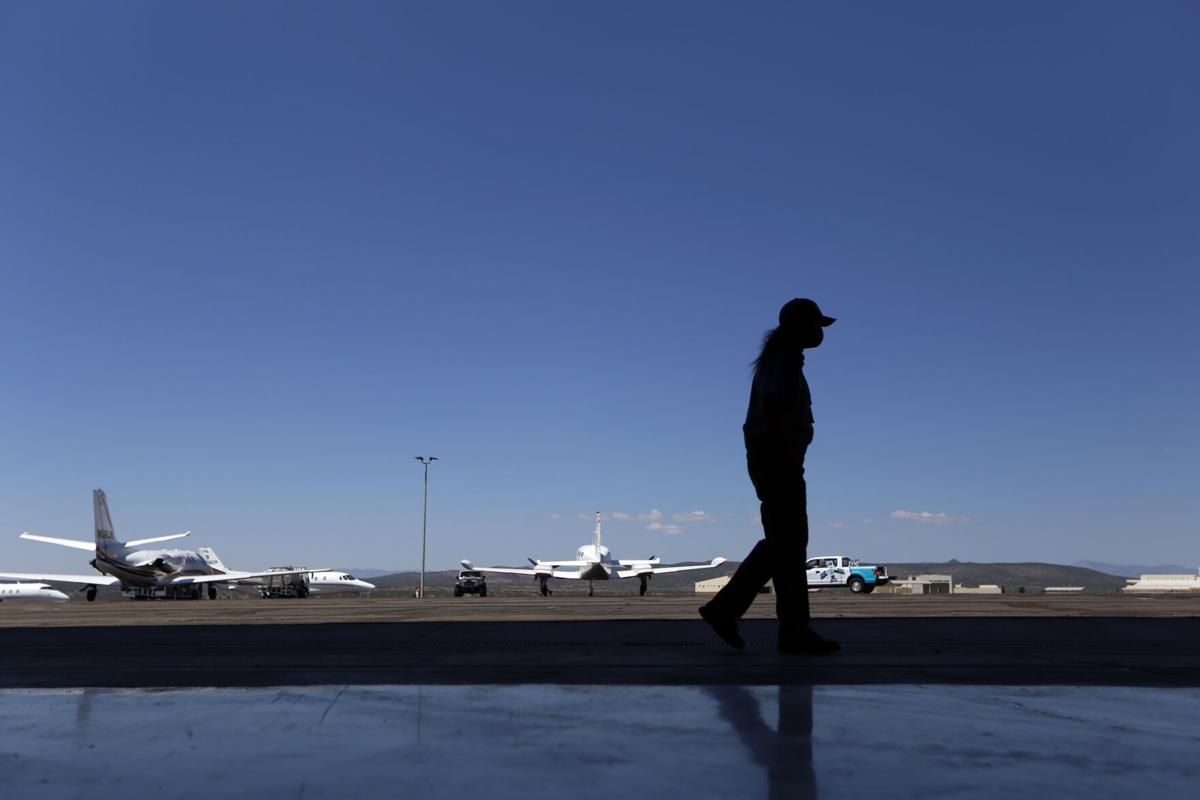 Jet Center at Santa Fe training supervisor Nathan Blim walks into a hangar Wednesday. Jet Center handles about 9,125 departures a year, ranging from 10 to 40 a day. 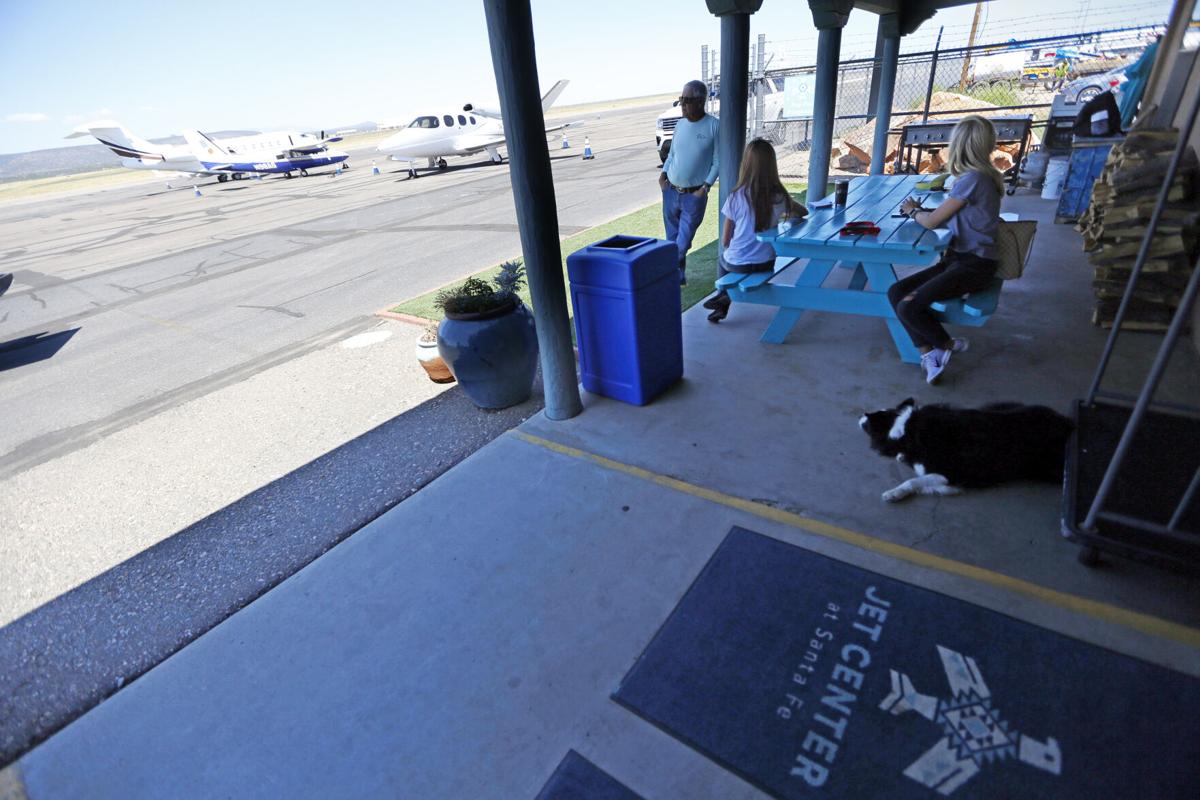 From left, Mark O’Brien, Chris Meigs and Sandra Drake hang out Wednesday at Jet Center at Santa Fe as they wait for maintenance work on their plane. They were headed to Kalispell, Mont.

Jet Center at Santa Fe training supervisor Nathan Blim walks into a hangar Wednesday. Jet Center handles about 9,125 departures a year, ranging from 10 to 40 a day.

From left, Mark O’Brien, Chris Meigs and Sandra Drake hang out Wednesday at Jet Center at Santa Fe as they wait for maintenance work on their plane. They were headed to Kalispell, Mont.

As the city plans to move forward with airport improvements and airlines see promise for increased travel to Santa Fe following a COVID-19-related lull, additional Denver and Dallas flights already are on the books, officials said.

American Airlines on Thursday added a 6:30 a.m. departure from Santa Fe Regional Airport to Dallas-Fort Worth after months of weathering New Mexico’s restrictive public health orders with just two daily departures, at 10:45 a.m. and 2:40 p.m., according to the airline’s website.

United Airlines has one 7 a.m. flight to Denver scheduled on certain days through Sept. 25 — Tuesday, Friday and Saturday on some weeks and Friday through Tuesday on others — but will expand its service, first to six days in the last week of September and then to four daily flights starting Oct. 1.

“They are throwing a line out to see if there is any interest,” Airport Director Mark Baca said of the two airlines. “It’s more a test.”

“It’s good that we are part of [United’s] recovery planning,” he added.

United in April had sought to temporarily cut service between Santa Fe and Denver, but the request was denied by the U.S. Department of Transportation.

The Dallas and Denver flights are the only nonstop flights offered at the airport, following American Airlines’ decision in April to quietly drop its Santa Fe-to-Phoenix route, which had been in place since December 2016. Baca said the flight was canceled numerous times between mid-March and April because it had no passengers.

“They are hopeful they can bring that flight back,” Baca added.

Before the pandemic hit earlier this year, passenger counts in Santa Fe had improved significantly for both airlines. American had about 14,000 passengers departing and arriving here in January and February, compared to about 11,000 each month in 2019, while United had nearly 6,500 passengers monthly at the start of 2020, an increase from 5,000 last year.

Air travel collapsed in April and May.

Private aircraft make up about 80 percent of the operations at the airport — and they kept flying during the early months of the pandemic as people with means left other regions of the nation to spend time at their second homes in Santa Fe.

“Another phenomenon going on is lots of people in big cities are looking to get out, even on a permanent basis,” Kirk said.

“We’re now running about 75 [percent] to 80 percent,” Padilla said. “Most of it is coming from people with second homes here.”

Most of the missing traffic, he said, is due to a drop in tourism. Though, Padilla added, “I haven’t seen that many gallery packages coming through.”

Padilla just built a second hangar for Jet Center. Each is 25,000 square feet and can hold up to 16 planes.

Airport improvements are also are on Baca’s mind. He has two taxiway projects, a terminal expansion and parking lot improvements in the works.

In the coming months, Baca plans to redo the airport’s parking lot, creating 435 paved parking spots to replace the current configuration of 180 paved spots and 240 unpaved spots. He also will replace the airport lot’s walk-up payment kiosks with drive-up ticket and payment stations at the entrance and exit.

By next summer, Baca wants to start construction on the 8,600-square-foot terminal expansion, which will nearly double the facility’s size.

Passenger areas have not changed much since the terminal was built in 1957.

The expansion, under consideration for several years, will extend beyond the security checkpoint to provide more seating and add food service for people waiting for departures, Baca said.

“It’s very difficult to social distance now,” he said, adding the terminal expansion could be complete by spring 2022.

Taxiways to two runways also are being rebuilt and realigned to allow for heavier aircraft. Construction on one taxiway, funded with $2.4 million from the U.S. Department of Transportation, is expected to be completed at the end of the month.

The Santa Fe airport this week received nearly $1.9 million in federal funding to complete a lighting project on another taxiway that is expected to start in the spring, Baca said.

“We think when this is all behind us,” Kirk said of the pandemic, “we will have better facilities to serve the public.”

Is anyone alarmed by the fact that the main population served by our airport are second homeowners with their own private jets? This model entitles the wealthy to pollute our skies with sound and carbon emissions - and meanwhile, those who inhabit the space surrounding the airport are those least likely to have the resources necessary to indulge in air travel. Once again, this is an instance of the elite dumping their waste onto the backs of the disenfranchised - and in this case, the permanent residents of Santa Fe.

It seems they took away flights from Phoenix to Santa Fe. I would fly there in October if Phoenix was available.