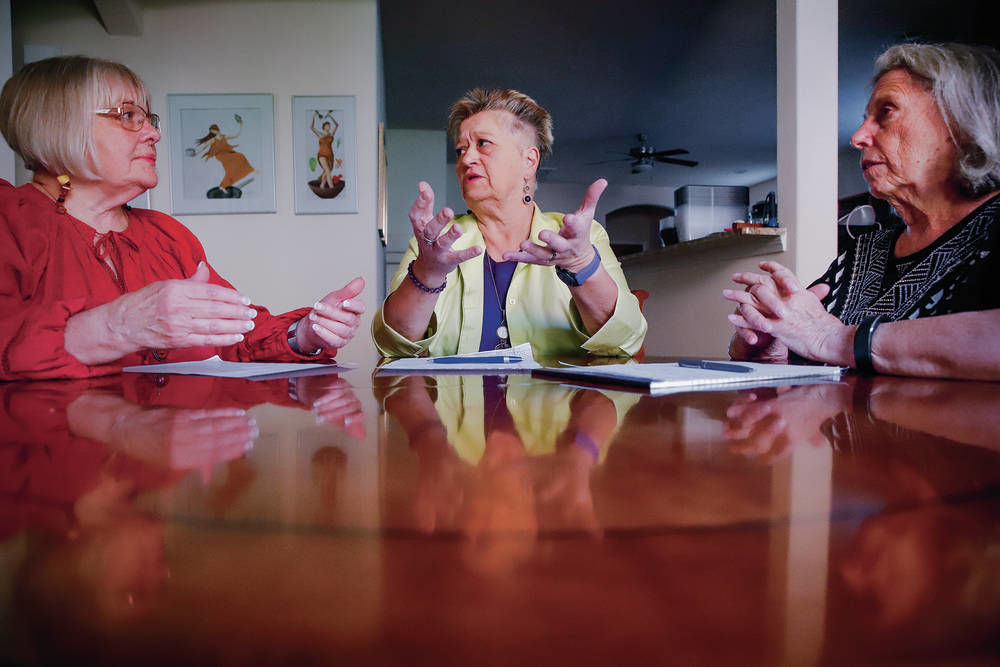 From left: Leona Stucky, with Healing Voices-Personal Stories; Marsie Silvestro, a nonprofit consultant; and JoAnne Tucker, founder and president of Healing Voices, sit together to go over Saturday’s schedule for the inaugural Day of Action Against Domestic Violence. Santa Fe will be one of 12 cities participating, using film to tell victim’s stories. Gabriela Campos/The New Mexican 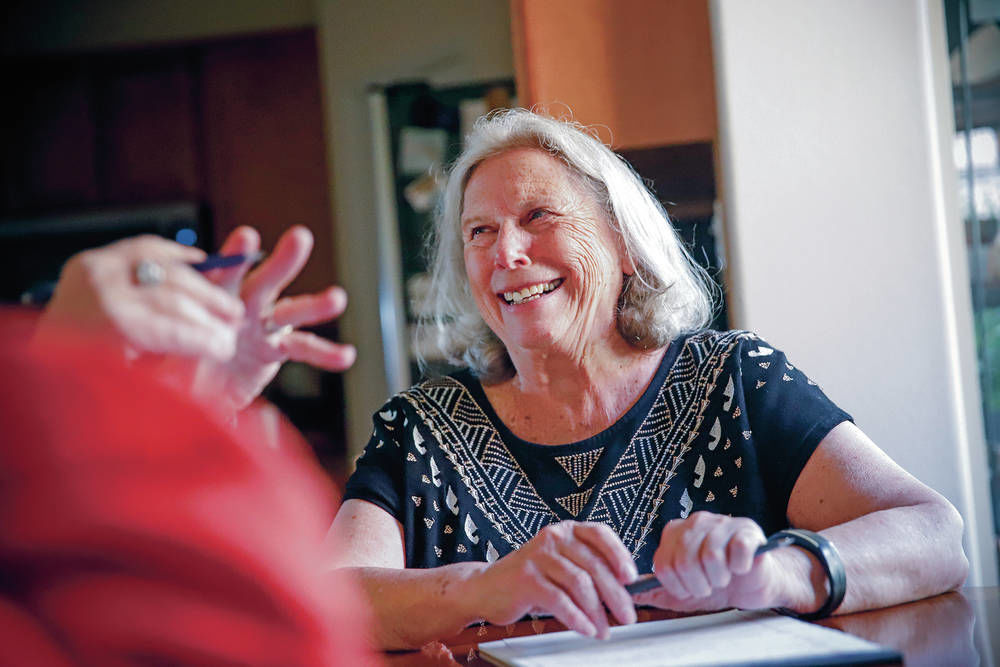 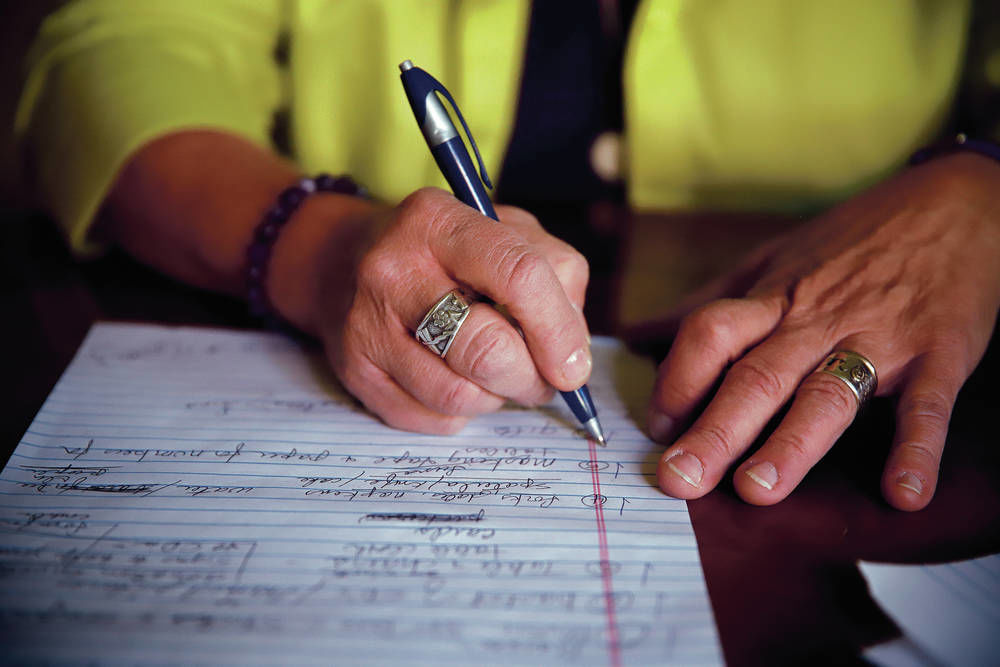 From left: Leona Stucky, with Healing Voices-Personal Stories; Marsie Silvestro, a nonprofit consultant; and JoAnne Tucker, founder and president of Healing Voices, sit together to go over Saturday’s schedule for the inaugural Day of Action Against Domestic Violence. Santa Fe will be one of 12 cities participating, using film to tell victim’s stories. Gabriela Campos/The New Mexican

The statistics remain staggering: One in 3 women in New Mexico and across the U.S. — and many men — experience violence by an intimate partner. The majority of incidents go unreported, and just a fraction of reports lead to criminal prosecution or jail time.

A national study released earlier this year found a recent rise in homicides involving intimate partners, with the majority of victims women. Santa Fe was shaken by such a case in July, when beloved local singer-songwriter and state employee Ernestine Saucedo was fatally shot by her husband, who then took his own life, in an SUV parked outside her downtown workplace, police said.

Experts say domestic violence is one of the most far-reaching epidemics, with an array of impacts ranging from the physical and mental health of families to the economics of entire communities.

Still, in a time when nearly every day is designated to a cause, there has never been a day devoted to raising awareness about domestic violence.

A Santa Fe-based organization — a nonprofit called Healing Voices-Personal Stories, which puts the problem in the spotlight through short films in which victims tell their own stories of abuse — was instrumental in organizing a Day of Action Against Domestic Violence on Saturday in a dozen cities across the country, from the City Different to the Big Apple.

Organizers hope the inaugural event will grow into a wider movement.

While no two cities have identical programs, each is heavily focused on the arts rather than marches and demonstrations. (Nationally, October is National Domestic Violence Awareness Month.)

Advocates acknowledge the statistics are haunting. According to the National Coalition Against Domestic Violence, about 20 people in the U.S. are abused by an intimate partner every minute; 21,000 calls are made to domestic abuse hotlines every day.

But such numbers aren’t enough to move people to address the problem, said Sheila Lewis, director of Santa Fe Safe, which coordinates court, counseling and social services for victims of sexual assault and domestic abuse.

She said it’s vital that people recognize just “how universal this issue is. … It affects the entire community.”

Leona Stucky, a Healing Voices board member and a survivor of domestic abuse, agreed, noting that while incidents of violence against women have risen, the issue remains “an invisible war.”

This is why Day of Action organizers are hoping to express the wide-ranging effects of the epidemic through art — something “more visceral,” Stucky said.

Some highlights of Santa Fe’s Day of Action:

• A theatrical performance combining personal stories of people who have experienced physical and emotional abuse, featuring excerpts from Stucky’s book The Fog of Faith: Surviving My Impotent God. The performance will also feature aerial dance.

• A so-called die-in, in which women will lie on the ground to represent victims of violence, as others surround them to symbolize a barrier of protection and support. This event will be held in memory of Saucedo and victims like her.

• A Clothesline Project outside Warehouse 21, where visitors can create a T-shirt in memory of someone who has died at the hands of an abuser or in honor of a survivor. The shirts will be hung along a clothesline as part of an interactive exhibit.

Healing Voices began planning these activities about 14 months ago with the intention of inspiring a national Day of Action movement. As facilitators teamed up with other local nonprofits and began networking with artists and organizations across the country, people in cities such Johnson City, Tenn., Little Rock, Ark., and Tallahassee, Fla., to name a few — began planning their own Day of Action lineups.

In New York City, organizers have planned professionally choreographed dance performances to symbolize the experience of domestic abuse; a Dallas event centers on a martial arts demonstration; and in Española, hundreds of balloons will be released to honor victims.

Groups from each city will film activities and Healing Voices will compile the footage into a documentary.

“It enables somebody else to feel empathy,” Tucker agreed. “… Without feeling compassion and empathy, people won’t do anything.”

What: The inaugural Day of Action Against Domestic Violence. The art-centered event will take place in 12 cities across the country, including Santa Fe, where it was founded. Throughout the day, about 20 organizations — the greatest collaboration some organizers say they’ve ever seen regarding domestic violence in Santa Fe — will provide educational information and resources to those who attend.