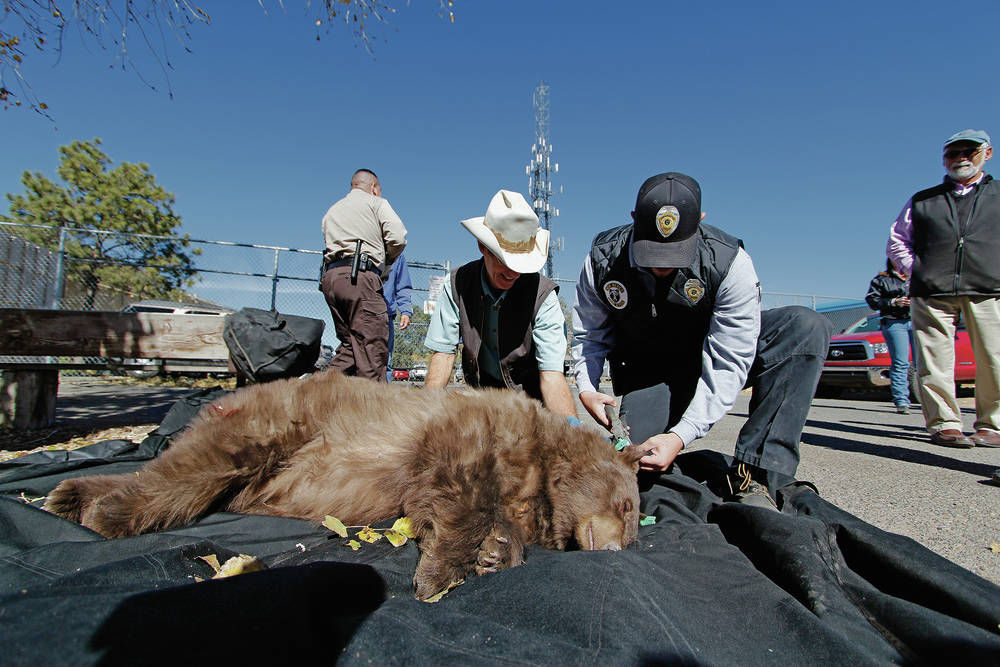 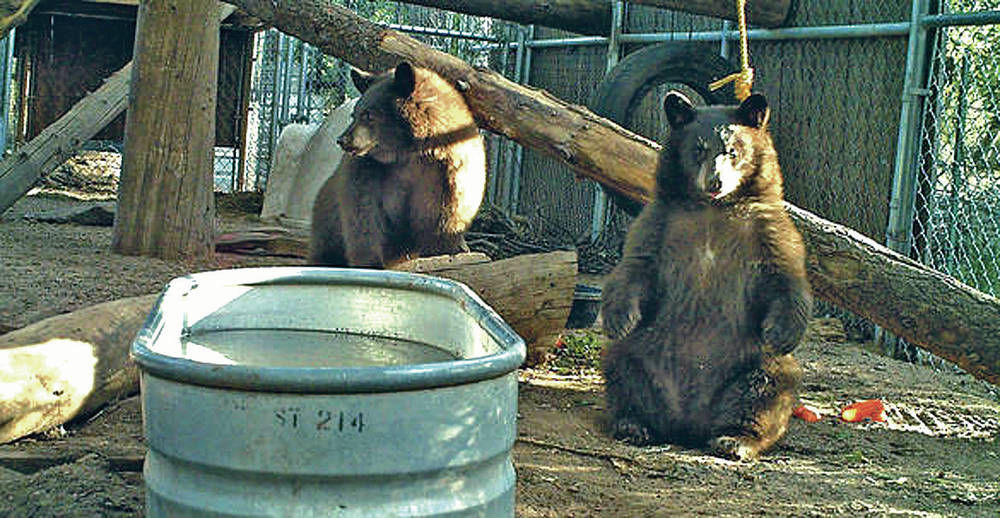 Cowboy and Valley Girl were released into the wild on Jawbone Mountain in Rio Arriba County following several months at the Cottonwood Rehabilitation Center, where the black bear cubs were taken in 2016 after their mother attacked a marathon runner and was shot to death. Courtesy Land of Enchantment Wildlife Foundation

Cowboy and Valley Girl were released into the wild on Jawbone Mountain in Rio Arriba County following several months at the Cottonwood Rehabilitation Center, where the black bear cubs were taken in 2016 after their mother attacked a marathon runner and was shot to death. Courtesy Land of Enchantment Wildlife Foundation

Melissa Silversmith Firestone drove up to her business in downtown Farmington on a Monday afternoon in September and saw her brother frantically running around the building.

“I had no idea what was going on,” she recalled in a recent interview. “He yelled, ‘Stay in the truck! There’s a bear!’ ”

After making sure her two dogs were safe inside the business, Silversmith Firestone photographed and videotaped the black bear. The animal was captured by the New Mexico Department of Game and Fish after it climbed a tree at a senior center.

“By about 1:15 p.m.,” the Farmington Daily Times reported, “the bear was on the road and, if things went as planned, heading back to freedom.”

For the bear, freedom was some 65 miles away from Farmington in the mountains of Rio Arriba County, where nearly half of all bears captured across the state by game wardens over the past three years have been released, according to documents obtained by The New Mexican under an open-records request.

Northern New Mexico ranchers and others have long believed that the area has become a dumping ground for bears captured in other parts of the state, causing death of livestock and other property damage.

But Dan Williams, a spokesman for the Department of Game and Fish, said there is no evidence that relocated bears are causing abnormal livestock predation in Rio Arriba County.

When asked whether there was evidence showing some livestock predation, Williams said he couldn’t answer the question.

“For that, we would have to review databases again, which would require an IPRA request,” he said, referring to a request for information under the state Inspection of Public Records Act.

Records show the department has captured 68 bears across New Mexico since 2015. A total of 20 were caught in Rio Arriba County, but 32 bears were released there.

Salazar, who lives in Medanales, said the Department of Game and Fish needs to inform the public where it is relocating bears.

“They’re not going to tell us because they know folks will rebel or protest what they’re doing,” he said. “They do everything behind closed doors.”

Williams said Rio Arriba County provides an ideal habitat for bears. The county stretches from the Colorado border on the north to Española on the south and from the Jicarilla Apache Nation on the west to Tres Piedras on the east.

“Rio Arriba County contains a large area of remote forest land that is suitable bear habitat, much of it with low bear densities,” Williams said in an email.

In neighboring Sandoval County, the department has captured four bears and released at least six since 2015, including three this year alone on Blue Bird Mesa near Cuba.

Williams said the department captures a bear when it is determined the animal is a threat to the safety of humans, pets or livestock or if it’s damaging property. All captured bears are tagged in the ear, he said.

“Once a bear is captured, it is given an initial health exam and transported to a release site,” he said. “If a bear has shown aggressive behavior toward humans, has lost its fear of humans or attacked a human or livestock, it likely will be euthanized.”

New Mexico’s policy sparked outrage in the summer of 2016 when the department killed a mother bear that had mauled a marathon runner in the Valles Caldera National Preserve. A state regulation dating to 1979 calls for the death of any wild animal that “bites or otherwise exposes a person to rabies” so its brain can be tested for the virus. The killing of the black bear, which tested negative for the rabies virus, prompted an unsuccessful push to change the policy.

The bear’s two cubs were captured in Sandoval County and placed at a wildlife sanctuary. About three months later, the bears — named Cowboy and Valley Girl — were released on Jawbone Mountain in Rio Arriba County, records show.

“Bears are relocated to areas a good distance from the capture site, areas known to have suitable bear habitat, and areas with bear densities low enough to preclude territorial disputes among bears,” Williams said.

When asked whether the department was moving a problem from one area to another, Williams reiterated that bears considered serious safety threats are likely to be euthanized.

“However, relocating bears never guarantees they will not get into trouble elsewhere,” he said.

For some in Rio Arriba County, the relocation of bears in the area is not a major concern.

Rio Arriba County Commissioner Alex Naranjo said the 12 additional bears released in the county when compared to the number captured there over the past three years didn’t seem like a “biggie.”

Still, Naranjo questioned why the department captured seven bears in Bernalillo County but released only one back into the wild in that county.

“They could put them out there in the East Mountains,” he said. “That’s hard to understand, no?”

County rancher David Sanchez said he hasn’t had any problems with bears. But he said he wasn’t surprised that the Department of Game and Fish has a tendency to relocate bears in Rio Arriba County.

“My ranch borders the [Bill Humphries Wildlife Area] northwest of Chama, and I know that they release bears there that come from problem areas and communities,” he said. “How do I know? I’ve seen the game warden with the cage there.”

Williams said 2015 and 2016 had high reproduction and survival rates for bears statewide as a result of increased spring moisture and good forage conditions that allowed female bears to raise multiple cubs.

“This year those cubs became sub-adults and were on their own for the first time without the presence of adult sows,” he said. “Many of those young bears wandered into areas where they encountered humans while they were looking for food and while trying to establish territories of their own.”

Silversmith Firestone, who ran into the bear at her downtown Farmington business, said she figured the Department of Game and Fish had taken the bear into the nearby mountains.

“That’s what I would assume,” she said, “unless they thought he needs to go even farther away since he’s a wanderer.”

The New Mexico Department of Game and Fish offers the following suggestions if you visit or live in bear country:

• Keep garbage in airtight containers inside your garage or storage area. Place garbage outside in the morning just before pickup, not the night before. Occasionally clean cans with ammonia or bleach.

• Never leave fruit from trees or bushes to rot on the ground because it is a powerful attractant to bears and other wildlife.

• Remove bird feeders. Bears see them as high-calorie treats, and they often will look for other food sources nearby.

• Never put meat or sweet-smelling food scraps such as melon in your compost pile.

• Clean and store outdoor grills after use. Bears can smell sweet barbecue sauce and grease for miles.

• Keep your tent and sleeping bag free of all food smells. Store with your food the clothes you wore while cooking or eating.

• Sleep a good distance from your cooking area or food storage site; 100 yards is recommended.

• Never intentionally feed bears to attract them for viewing.

If you encounter a bear:

• Stop and back away slowly while facing the bear. Avoid direct eye contact, as the bear may consider that a threat. Do not run. Make yourself appear large by holding out your jacket. If you have small children, pick them up so they don’t run.

• Give the bear plenty of room to escape so it doesn’t feel threatened or trapped. If a black bear attacks you, fight back using anything at your disposal, such as rocks, sticks, binoculars or even your bare hands. Aim for the bear’s nose and eyes.

• If the bear has not seen you, stay calm and slowly move away, making noise so the bear knows you are there. Never get between a mother bear and her cubs.

For more information about living with bears in New Mexico, visit www.wildlife.state.­nm.us.